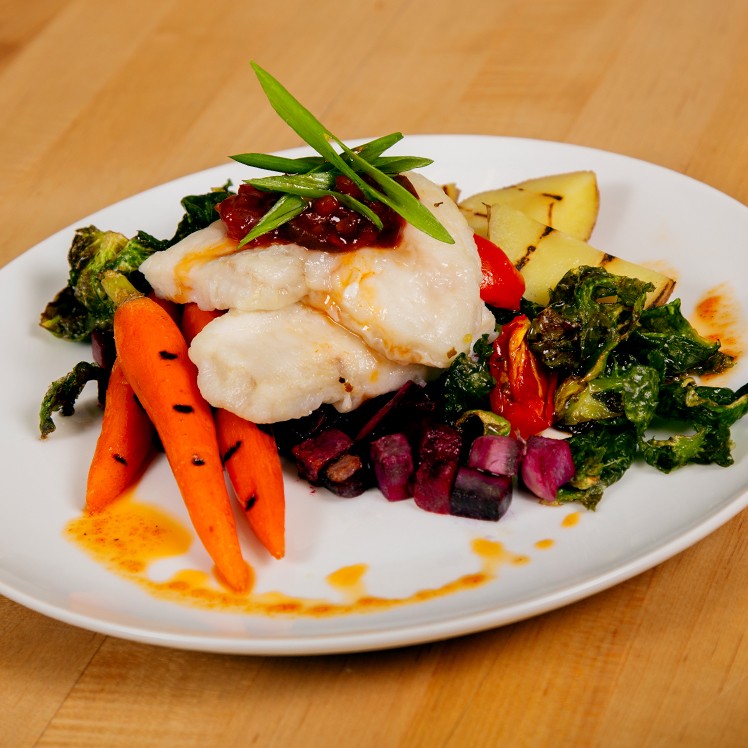 To prepare tomato jam: Prep time – 15 minutes. One hour cook time. All other prep can be done during the jam’s cook time.

In a medium, heavy-gauge stainless pot, over medium heat, add the olive oil, garlic and ginger and cook two minutes – then add the vinegar and cinnamon sticks. Reduce the mixture by half. Add the rest of the ingredients except the honey and turn down to a medium simmer. Simmer for approximately 45 minutes to an hour, or until all the tomato juice has evaporated and it’s nice and thick, similar to syrup. Stir often so the mixture does not stick to the bottom of the pot. Remove it from the heat and add the honey and stir. Pull out the cinnamon sticks and adjust the seasoning with salt and pepper. Cool and refrigerate for up to seven days.

To prepare the fish:

Place the frozen pollock fillet on an oil-sprayed sizzler plate and spoon 2 oz. of jam on top of the fish and spread evenly. Bake in a 400°F convection oven on high fan for 13 to 16 minutes, or until an internal temperature of 155°F is reached. Remove from the oven and cut in half.

In a bowl, toss the petals in the olive oil, and then sprinkle with seasoning. Toss them together again. Place on a half-sheet tray and place in a 350°F preheated convection oven on high fan. Cook for 10 to 12 minutes or until golden brown and crispy, but not burnt. Hold at room temperature.

In a large sauté pan over medium-high heat, combine the olive oil, onions and carrots. Sauté for two more minutes. Turn down the heat to medium, then add the Brussels sprout petals and the garlic and stir the mixture together for two more minutes. Next, add the sherry vinegar, cooking until the petals are tender, about three to four minutes. Season with salt and pepper to taste. Reserve and keep hot until plate up.

Preheat the grill on high and place seven of each colored potato in a small pot and cover with cold water. Bring to a boil, turn down to a simmer and then cook 12-15 minutes or until just tender. Drain and cool, then cut each potato in half, longways. Brush each half with oil and season with salt and pepper. Place the flat side of the potato on the grill and cook two to three minutes on each side. Reserve and hold hot until plate up.

Place oil and paprika in a small sauté pan over low heat, stirring with a whisk. Heat three minutes or until the oil has a nice orange hue. Remove from the heat and strain through cheese cloth or paper towel. Cool oil and place in sealed container. Can be left at room temperature for up to 14 days.

For final assembly of the dish:

Place approximately one cup of the sautéed Brussels sprout mixture in the center of the plate, making sure you use some of the liquid from the pan. Then place one half of the cut pollock on top of the mixture and then place the other half of the pollock diagonally on top of the first half. Place one half of each colored hot fingerling potato to one side of the mixture with them facing different directions. Drizzle about two teaspoons of paprika oil around the outside edge of the plate in a circular pattern, then place seven crispy Brussels sprout leaves in the same pattern around the plate. Top the fish with the same amount of crispy leaves. Finally, garnish the top of the crispy Brussels sprout with the bias-cut scallions. Enjoy!