When it comes to building craveable, must-order dishes, no ingredients allure chefs and diners more than those wrapped up in the word “umami.”

“I like to punch people in the mouth with flavor, and umami is the knuckles of that punch,” says Chef Shane Lyons, a consultant who re-energizes restaurant kitchens nationwide.

Umami-rich foods are trending, the word itself appearing across all concepts more commonly now than ever. But cooks have long understood that ingredients like aged cheese, dried meat, fermented fish and soy sauce amplify the savory satisfaction of other ingredients. “Our ancestors acted instinctively,” says chef Antonio Morichini of Via Vai in Astoria, New York, of this intuitive understanding of the “fifth sense.” 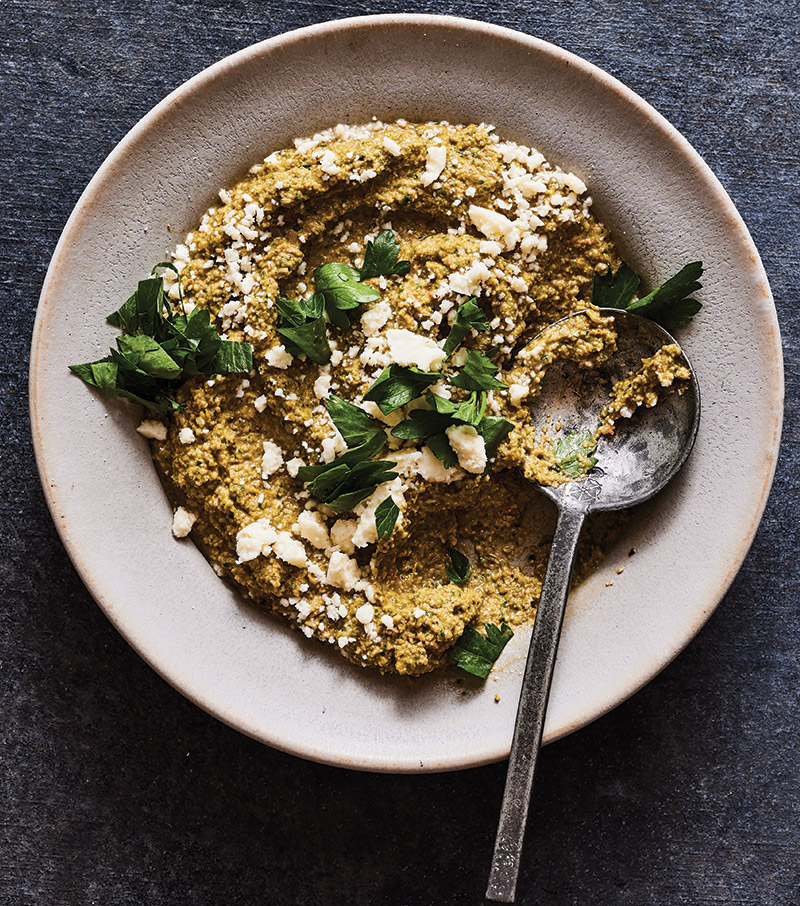 Such ingredients can be an obvious umami bomb, a layer upon layer method of building a dish. But they can also take a “less is more” style, whether the venue is fine dining or sports-bar casual.

“Minimalism rooted in high-quality ingredients with fantastic technique is the most impactful approach for both,” Lyons says. “How you use umami within that should be considerate and deliberate.”

Plow ahead and consider eight underutilized umami bombs that deliver a savory punch.

Anchovies (and their sardine cousins) are delicious on their own. “But when used as an element of a recipe, they add savoriness but do not overpower,” says Morichini. He notes how their saltiness helps boost the sweeter umami in other ingredients like cheese or tomatoes, while remaining subtle. For a pasta that satisfies in cooler fall months without weighing the body down, he goes for a pasta pesto with broccoli rabe, pecorino, parmesan, pine nuts and anchovies. “Without the anchovies, the pesto becomes less flavorful and more timid,” he says. “With the anchovies, the broccoli rabe pops.” 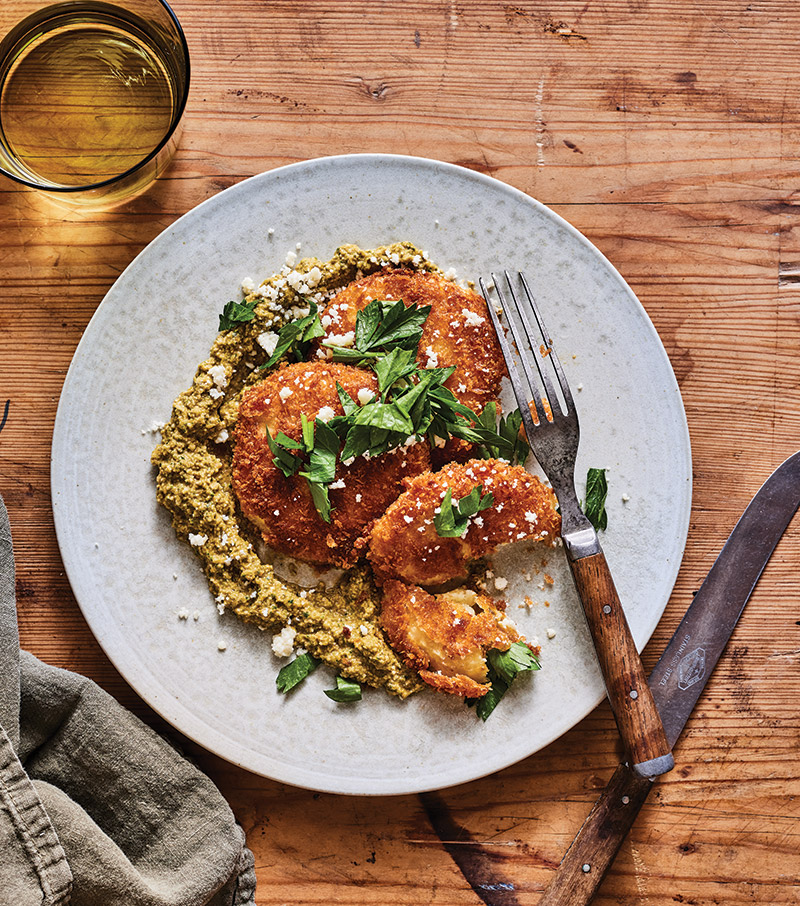 When aged for around two months, garlic develops a jet-black hue, sticky texture and earthy-sweet umami akin to dark molasses or a plummy red wine. And the bite of raw garlic completely disappears. But Lyons warns its umami overwhelms if used with a heavy hand and should be used as unadulterated as possible. Warm to smear on a steak. Or blend into the sauce of a vegetarian pasta for an earthy funk and luxurious mouthfeel. For fall, chef Guy Meikle of Heritage in Chicago blends black garlic with apples in a finishing sauce for his lamb shiitake mandu. Against a pickled ramp aioli, the black garlic offers “a rich and satisfying umami base that pairs perfectly with the iron-rich lamb and is the anchor around which all of the other flavors are built,” Meikle says.

The longer a cheese ages, the more proteolysis breaks down the milk protein into free amino acids that deepen in umami notes. When it comes to blue cheese, the umami covers sweet, salty and funky all together. Rather than simply adding to a cheese plate, try a dollop over braised meats, add to mac and cheese or whisk a little into dressings for roasted vegetable salads. Nicole O’Brien, chef/owner of The Pandering Pig in New York, adds a hefty ounce of Point Reyes blue cheese to the final plating step of her otherwise classic coq au vin. “I strive to turn traditional dishes upside down by blending the perfect amount of sweet and savory, giving flavors you wouldn’t expect throughout the bites of the dish,” she says. “It brings an unexpected layer to the sweet/salty jus, the umami of the roasted mushrooms and the layers of spice in the carrots – a very complex, layered bite.”

“I LIKE TO PUNCH PEOPLE IN THE MOUTH WITH FLAVOR, AND UMAMI IS THE KNUCKLES OF THAT PUNCH." 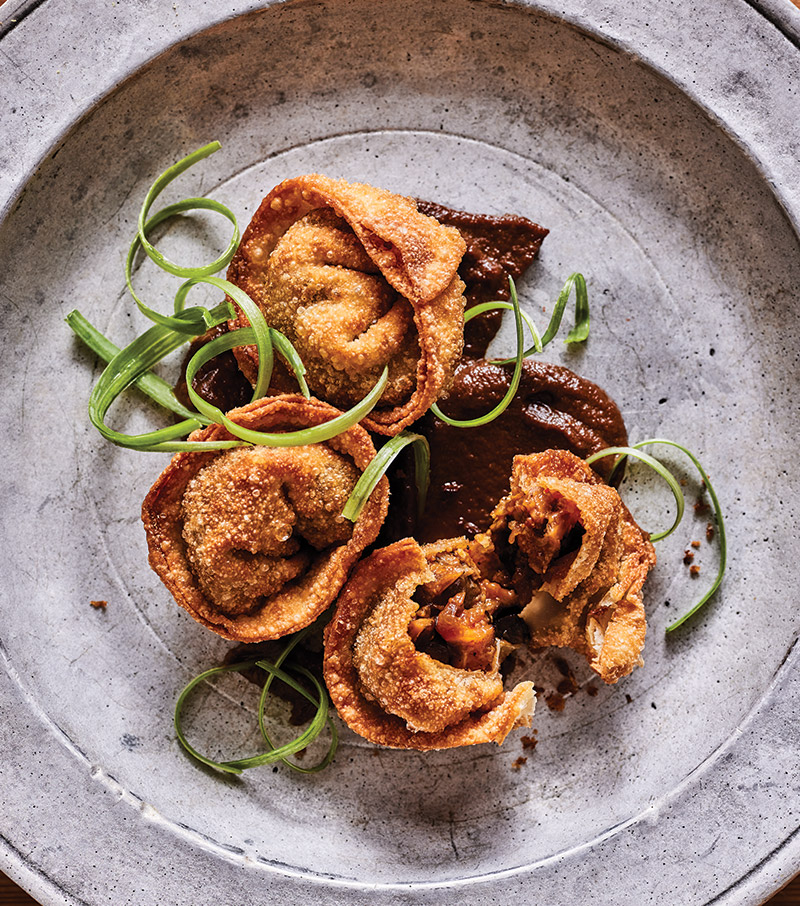 Fresh mushrooms rank high among umami-packing ingredients. Drying them further concentrates their flavor and expands the versatility of their texture. Grind dried mushrooms and use wherever you need a powerful, savory spice: as a meat or fish rub, whisked into dressings or infused into mayo for sandwich spreads or dipping sauces. At Curate in Asheville, North Carolina, chef Katie Button relies on whole dried mushrooms to fortify her chicken stock: “It tastes like umami squared,” she promises of how charred chicken bones, caramelized alliums and the mushrooms come together when slowly simmered. That stock then becomes the cooking liquid for her rice dishes and vegetables, and the base for soups. “The richer, more umami-based your base flavor is, the better that final dish is going to come out,” she says. 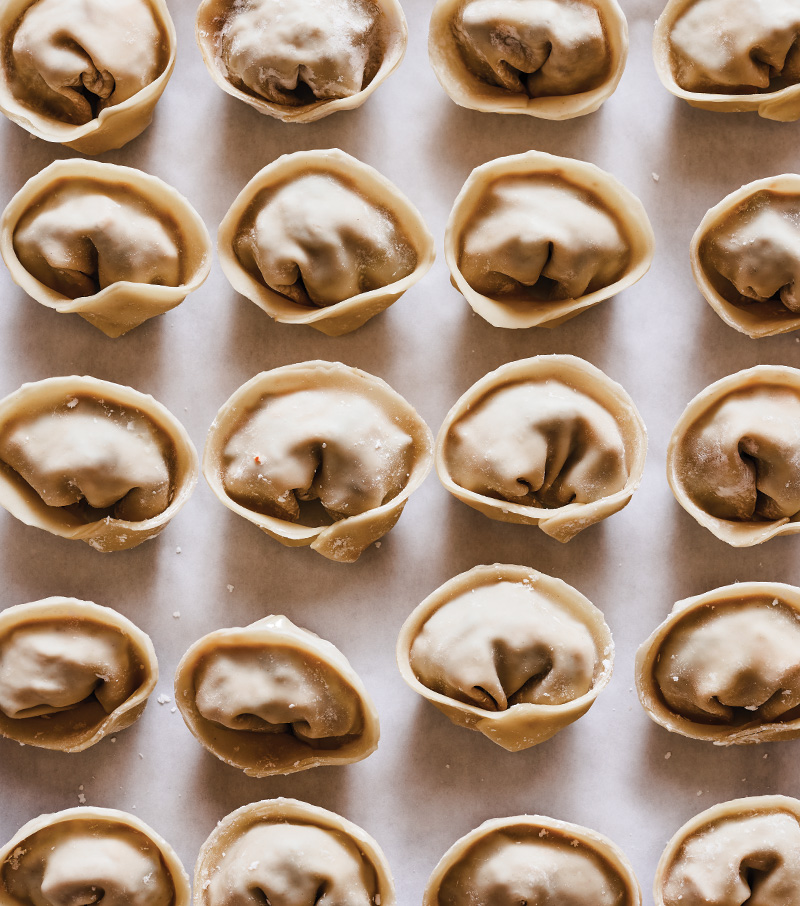 Kombu is the umami ingredient that started it all (see umami sidebar). High in glutamate, kombu is also an excellent source of magnesium, folate and vitamin K1 and is low in sodium, while tasting like the sea. Because of this mineral-packing combo, it’s a superb swap for salt in general when dried and powdered. Sprinkle it in broths, rice dishes and porridges for a quick, subtle, salty boost. For fall, kombu powder adds that craveable sweet-and-salty umami to root vegetable soups, hearty roasts and barbecue dishes. And let us not forget French fries or anything fried, for that matter.

Maggi is the Swiss’ contribution to the world of salty seasoning sauce. Invented in 1888, the fermented wheat protein comes in liquid or dehydrated cube form, dispersing to massively boost umami (and sometimes literal MSG). While saltier and a bit funkier than soy or tamari, use similarly in soups, stews, braises, noodles and rice dishes when desiring those deep, dark, salty umami notes. But be warned; Maggi products differ by market region, so the same seasoning sold in France tastes different than the one sold in Vietnam. With several available at international markets in the United States and via the internet, enjoy and explore which best suits your cuisine. 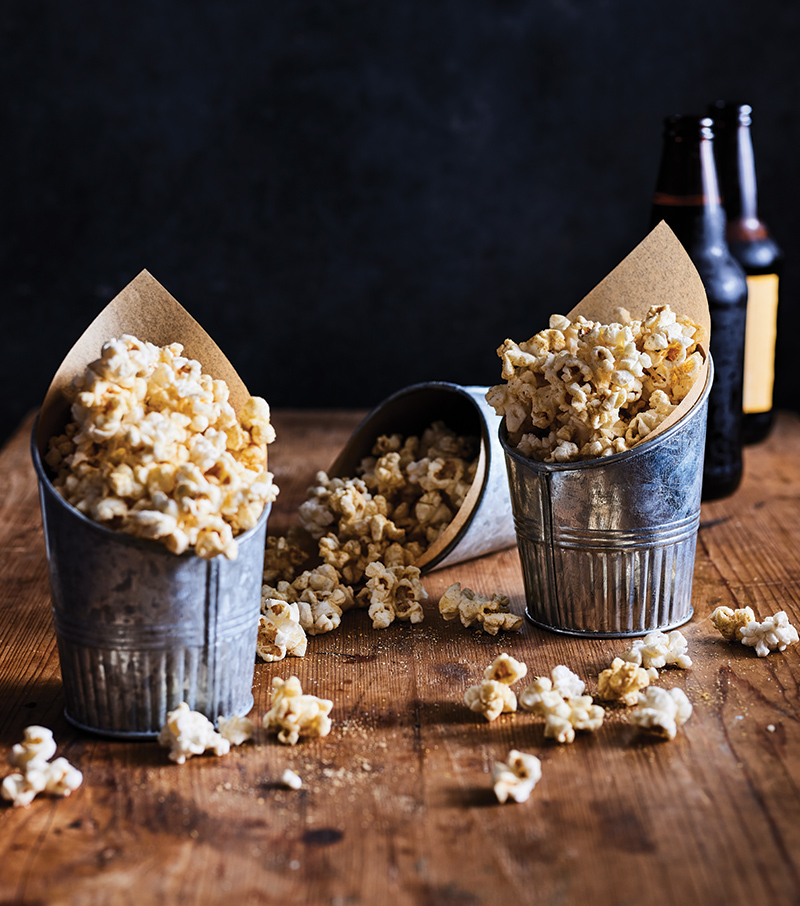 A deactivated form of yeast, this yellow flake or powder is beloved by vegetarians for its cheesy, nutty flavor and high nutrient value. Shake it over mashed potatoes, swirl it into pasta or stir it into dressings for a quick boost of can’t-get-enough flavor. Lyons grew up with the “hippy, crunchy thing” of eating umami-dusted popcorn and put the snack to good use when he was the chef of Distilled in New York. “We gave out salt, sugar and umami-dusted popcorn because we understood that the more popcorn people eat, the more beer they drink – it was a way to increase the check average,” he admits. “The yeast is the umami-rich protein that causes a mouth-coating effect and a rich, meaty taste – while being vegan/vegetarian. It creates these intermittent moments of robust umami flavor that are irreplaceable for palate joy.”

“WE GAVE OUT SALT, SUGAR AND UMAMI-DUSTED (NUTRITIONAL YEAST) POPCORN BECAUSE WE UNDERSTOOD THAT THE MORE POPCORN PEOPLE EAT, THE MORE BEER THEY DRINK—IT WAS A WAY TO INCREASE THE CHECK AVERAGE.”

High in glutamic acid, sweet-and-savory tomatoes deepen with umami as they ripen, dehydrate or cook down. Diners might be familiar with tomatoes used for umami in Italian cuisine. But chef Felipe Donnelly of Colonia Verde and Disco Tacos in Brooklyn, New York, points out that they’re native to South America and therefore, are an essential ingredient in Mexican dishes. “The tomato brings acid and savory notes and provides that amazing meaty deliciousness,” he says of incorporating charred tomatoes into salsas, soups and stews. In his sikil pak dip, Donnelly blends the charred tomatoes with toasted pepitas, onions and peppers to “fill the dish with umami.” For fall, pair alongside root vegetable crudite or use as a sauce for roasted fish or chicken.

Defining umami isn’t easy, even for chefs. “It’s almost like something that your mouth understands but your brain can’t understand,” says chef Katie Button of Curate in Ashville, North Carolina. Most cooks can’t define umami beyond the words “savory” and “delicious.” But a definitive, scientific answer exists. And it has everything to do with the brain.

In 1908, the Japanese chemist Kikunae Ikeda wondered why his bowl of (vegetarian) dashi contained a gastronomic allure beyond the known flavors of salty, sweet, sour and bitter. Ikeda separated dashi’s main ingredient – kombu – into its scientific components and tested them until he concluded that the amino acid glutamate specifically exploded and amplified the body-happy satisfaction of the overall dish. He named this fifth sense umami and patented the flavor enhancer monosodium glutamate (MSG).

Since his discovery, it’s been understood that foods high in glutamate (or glutamic acid) are not only particularly satisfying on their own, but they also boost the overall intensity of other ingredients. A 2012 paper in the “Journal of Oral Biosciences” explains:

Glutamate stimulates the insular cortex, limbic system and hypothalamus in the brain, activating our autonomic reflexes and flooding us with happy feelings. Not only that, but receptors in our mouths, on our tongue and in our gut are designed to specifically react when so hit with glutamic acid – we’re built and wired to feel pleasure when an heirloom tomato, raw cheese or perfectly manufactured seasoning product hits just right.

To be clear, however, umami transcends its Asian roots. So don’t hesitate to point it out. Allure is everything.