Getting the most out your employees can propel your business towards greater profitability. Having a well-trained and happy workforce is important. At this event, we’re discussing solutions for finding skilled labor in foodservice now, including the most effective and profitable ways to schedule and train.

Lisa Ludwinski
Lisa Ludwinski spent her childhood in Milford, Michigan making too-salty cookies and directing her neighbor friends in home movies. She studied Theatre Arts at Kalamazoo College before moving away to Brooklyn, NY to pursue dreams of directing. 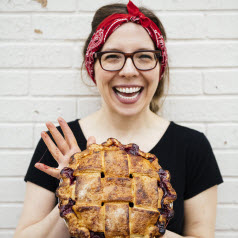 Naturally, the vibrant food culture of New York led to distraction that resulted in a low-budget cooking show called Funny Side Up that Lisa filmed in the many tiny apartment kitchens she inhabited over the course of her six-year stay. In 2012, she moved back to Michigan with dreams of opening a bakery with a big-hearted mission: make delicious food and treat your community (employees, neighbors, partners) well. Lisa launched Sister Pie out of her parent’s Milford kitchen and began to build the business piece-by-piece, with the help of many supporters and a whole lot of dancing. She and a small crew of passionate women opened the doors to the Detroit pie shop in April 2015, and they’ve been hustling ever since. Lisa firmly believes in creating a great work culture for her employees and is a member of FoodLab Detroit to help connect with a community of food entrepreneurs growing triple-bottom-line businesses. The Sister Pie cookbook will be published on October 2, 2018. Lisa currently resides in the West Village of Detroit with her pup Ruby Thursday.

Max Hardy
Chef Max Hardy was born in Detroit but started his career in Tampa, Florida, as a student in the Culinary Arts Program at Wharton High School. 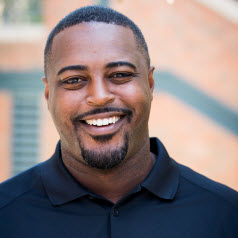 After training at the award-winning, Johnson & Wales University in Miami, he started his own culinary enterprise, Chef Max Miami, where his clientele included athletes, Hip Hop and R&B artists, actors, and foreign dignitaries like the Prime Minister of Turks and Caicos and the Prince of Dubai. From 2009 to 2014 he was the full-time personal chef of NBA All-Star Amar’e Stoudemire. During this time, he co-authored a cookbook with Stoudemire called Cooking with Amar’e – 100 Easy Recipes for Pros and Rookies in the Kitchen. Hardy more recently co-authored Marley Coffee Cookbook: One Love, Many Coffees, and 100 Recipes.

Hardy relocated back to his favorite city, Detroit, to open his restaurant – COOP. He was the recipient of the My Brother’s Keeper award by President Barack Obama in 2016 and was featured in the 2016 Aetna African American History Calendar.

Kiki Louya
Born to Congolese and Southern American heritage, Kiki Louya has always been interested in the ways food shapes a community. Now, as co-owner of The Farmer’s Hand, a gourmet grocery and take-out counter, and Folk, a seasonally inspired brunch café, she works with hundreds of local Michigan purveyors and sees firsthand the impact triple bottom line businesses have on food. 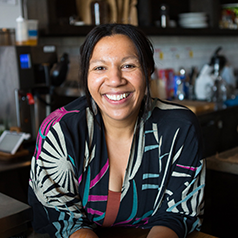 Kiki is a graduate of The University of Michigan in Ann Arbor and Le Cordon Bleu College of Culinary Arts in Chicago. Prior to venturing out on her own, Kiki’s journey in hospitality began more than 20 years ago – and she’s worked in almost every front and back of the house position since. Most notably, she trained under some of the world’s most famed chefs, including her personal favorite, multiple James Beard award-winner Paul Kahan of Blackbird, avec, Nico Osteria.

Kiki lives in Midtown, Detroit with her husband and two rescue pit bulls.