Getting the most out your employees can propel your business towards greater profitability. Having a well-trained and happy workforce is important. At this event, we’re discussing solutions for finding skilled labor in foodservice now, including the most effective and profitable ways to schedule and train.

Frank Bonanno, Restaurant Owner, Chef and Head of Bonanno Concepts
With 26 restaurants under his belt, Frank Bonanno is a nationally recognized chef and restaurateur from Denver, Colorado. He’s the culinary force behind some of Denver's finest eating and drinking establishments and he flexes his culinary chops in the award-winning fare at his French gem Mizuna, the handcrafted Italian artistry of Luca, the classic casual European bistro French 75 and the distinctly Americana of Russell’s 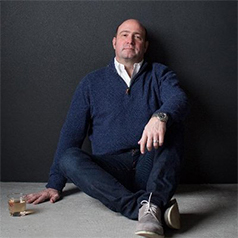 Smokehouse. His innovation is showcased in the accolades of Denver’s first noodle fusion venture Bones, the high-end cocktail joint Green Russell (recognized three times by Condé Nast as among the top ten cocktail bars in the world) and the popular Larimer Square fixture Osteria Marco.

Though Bonanno is a true restaurant guy, holding both business and culinary degrees, it’s his role as a mentor and philanthropist that’s having the greatest impact on Colorado. He is the host of the PBS series, Chef Driven, and has appeared on Bravo and The Food Network. His newest project, Denver Milk Market, opened in June 2018, which makes him one of the very few chefs to own and operate all 16 concepts in a marketplace environment.

Brother Luck, Restauranteur and Chef of Four
With a name like Brother Luck, it would be easy to attribute your success to good fortune. But he is a result of hard work, determination and passion. After relocating to Phoenix, Arizona, as a teenager, Luck enrolled in the Careers through Culinary Arts Program (C-CAP) at Metro Tech High School, where he got his start in the culinary industry. C-CAP works to identify participating high school seniors who have demonstrated outstanding potential and achievement in the culinary arts and require additional resources to take the next step toward a career. 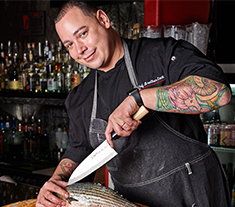 With his successes in high school, Luck was awarded enough scholarships to attend the Art Institute of Phoenix and his time in college would lead to a diverse career of cooking in places around the world such as Kanawaza, Japan; San Antonio; Chicago; New York City and Colorado Springs where he opened Brother Luck Street Eats. There, he was honored as Best Local Chef by Colorado Springs Independent and “Most Cutting Edge Restaurant” by The Gazette Newspaper.

In 2016, C-CAP awarded Luck with an alumni scholarship from The Gohan Society to expand his cooking and travel experiences in Japan, while the Joyce Chen and Helen Chen Foundation allowed him to extend his training and exposure into China — opportunities that have shaped both his cooking style and personal perspective.

Luck opened his very own restaurant, Four by Brother Luck, in downtown Colorado Springs to rave reviews in March 2017. Luck also has an impressive array of television appearances including being a Chopped Finalist on the Food Network and winning his episode of Beat Bobby Flay. Most recently, he was a favorite on Top Chef’s Season 15. 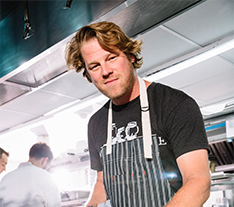 Alex Seidel is chef-owner of Fruition Restaurant, Mercantile Dining & Provision, Füdmill and Chook (opening Fall 2018). Fruition has been named the number one restaurant in Colorado by Zagat every year since it opened and has also been included in 5280 magazine’s list of 25 Best Restaurants every year since the ranking began. Seidel himself has been the recipient of many accolades, including Food & Wine magazine’s Best New Chef in 2010 and has received Chef of the Year titles from local media including Denver Magazine and 5280 magazine. He was also awarded the 2018 James Beard Foundation Best Chef: South West award. In addition to his restaurants, Seidel owns Fruition Farms Creamery, Colorado’s first artisan sheep’s milk creamery, located in Larkspur, Colorado.

Seidel participates in numerous off-site events for both charitable and fine dining experiences. He enjoys furthering the culture of cuisine while also championing issues that are important to the industry. Becoming a chef and a business owner has allowed him to hone his skills, while controlling the ingredients and the sourcing of his provisions.

Patricia B. Calhoun
Patricia Calhoun has the world’s shortest resume. After graduating from Cornell University, she founded The SandPaper, a weekly on Long Beach Island, New Jersey. In 1977, she started Westword, an alternative weekly in Denver, where she’s been the editor ever since. 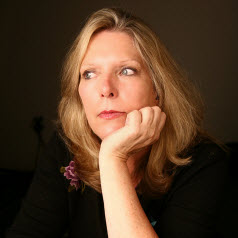 Today she also edits Westword.com, a 24/7 website. Calhoun is the past president of the Association of Alternative Newsweeklies and the lead-off chair on Colorado Inside Out, a weekly public-affairs roundtable on Colorado Publication Television. Her columns have been awarded the Golden Quill, the Unity Award and the national Women in Communications prize. Career highlights include interviewing President Bill Clinton (in flip flops!) and playing an actual reporter in John Sayles’s Silver City.