The restaurant industry will not be the same, says Seattle restaurateur Mark Canlis, whose family has been in the business since 1910. 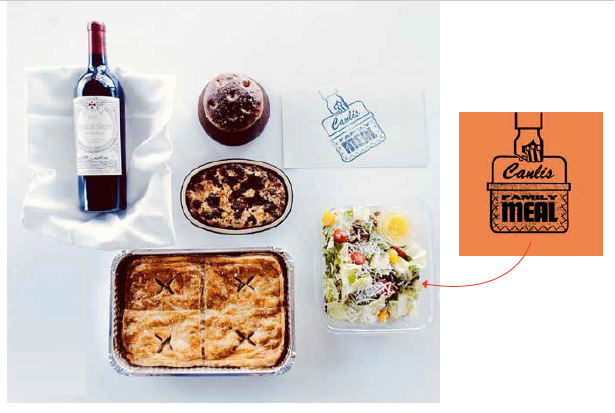 Few would disagree. Over just two weeks in March, nearly half of the 15.5 million people employed in the industry lost their jobs as the COVID-19 pandemic shuttered bars and restaurants. Some data suggest that 75% of those restaurants won’t open again. 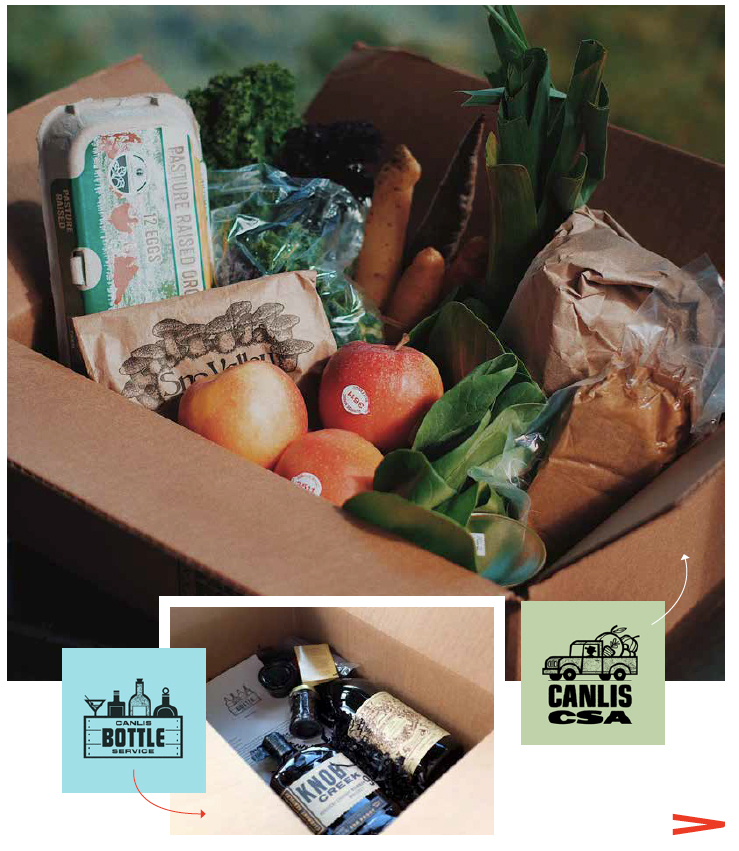 But the pandemic will have an even more lasting impact. “We can go back to business as usual. We can’t repeat the same business patterns,” says Daniel Shein, co-founder of Agnoris, a New York startup that helps restaurants use data to run more efficiently. “We have to be much more efficient,” which means the industry will have to be more reactive to and predictive of diners’ behavior – and respond to it far more quickly.

The industry’s future probably will look a lot more like this moment of crisis – and less like the world that preceded it. “We now live in a time when viruses happen; it’s not a one-time event,” says Alice Julier, director and professor of the Food Studies Program at Chatham University in Pittsburgh.

Though opinions vary, industry experts, from chefs and owners to designers and other foodservice insiders, offer plenty to think about when the business emerges post-COVID-19.

Easing Fear Will Be a Major Differentiator

Last year, analysts predicted 2020 would be the first year Americans would spend more on delivery and takeout than on-site dining. Thanks to the pandemic, that trend has quickly accelerated and solidified. Contactless delivery will be expected, but restaurants can win over regulars by using sealed, tamper-resistant delivery bags or compostable and reusable delivery materials. Jack Li, the managing director of Datassential, a food-focused market research firm in Chicago, suggests going one step further and calming customers’ fears by offering heatable containers. “Consumers believe hot foods are safer than cold foods, so give them a box of food that can be put in an oven so they feel they’re sterilizing the package,” Li says. “You have to think that when you’re giving people food, you’re giving them a live hand grenade, so here are ways to defuse it.”

The Return of the Milkman Model

“Delivery and takeout are here to stay,” says Scott Landers, co-founder of Figure Eight Logistics, a New York food-delivery consultancy. As delivery spikes, so will environmental concerns about throw-away packaging. He wonders if some restaurants might start picking up used containers from people’s homes. “I love the milkman approach: You put out your old bottles and get new ones that have been washed,” Landers says. “Restaurants could do the same with reusable plates.” In doing so, they’ll also need to decide if it makes more financial sense to rely on third-party driver networks or build their own fleet of drivers instead.

Restaurants Will Take a Page Out Of Amazon’s Playbook 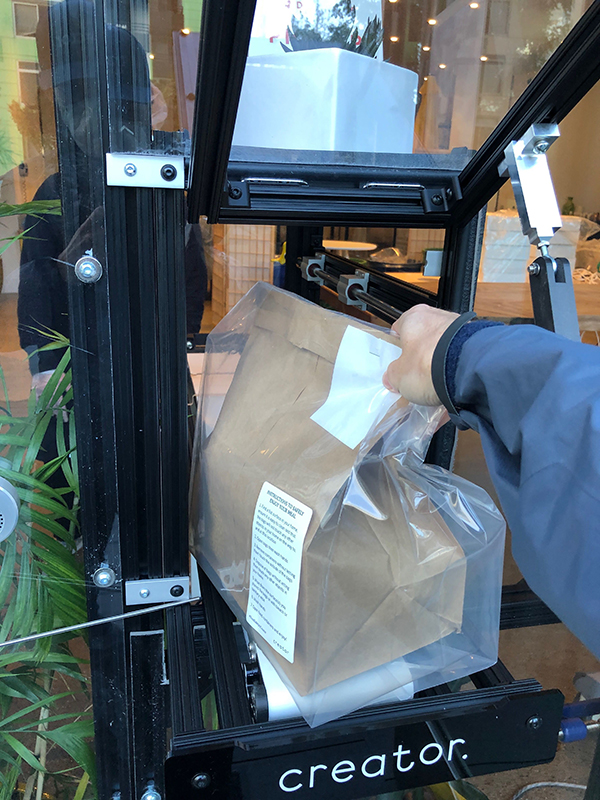 “Restaurants and grocery stores will meet in the middle,” Landers says. To stay ahead of the trend, consider a strategy that moves beyond simple meal kits toward delivering a complete dining experience in a box – whether that’s an entire birthday party meal for 10 or a date-night dinner with candles and expertly curated wine.

“ THE SINGULAR CONCEPT RESTAURANT THAT DOES ONE THING WILL GO AWAY. WE SELL EVERYTHING FROM BREAD FLOUR TO TOILET PAPER.”
— Chef Eric Rivera of Addo in Seattle

The New Face of Automation 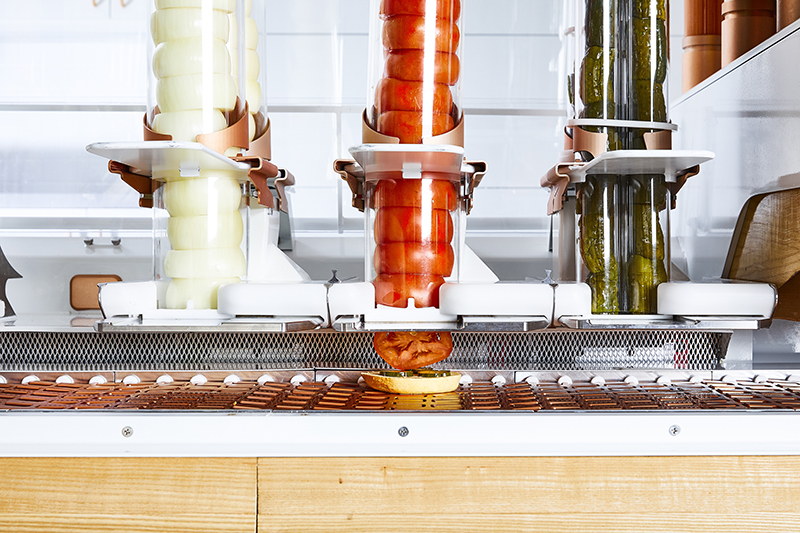 Contactless delivery may evolve into contactless food prep sooner than predicted if masks, gloves, social distancing and sanitation don’t cut it. San Francisco’s Creator, where robots cook and assemble burgers that never get touched by staff has responded to the pandemic with a “transfer chamber.” It’s an airlock takeout window that safely delivers hermetically sealed to-go meals to customers and delivery workers outside via a conveyor belt that dips into a sanitizer bath as it turns. “We made this barrier to keep both our staff and customers safe,” says founder Alex Vardakostas. Creator also open-sourced the chamber’s design, so others can make and customize their own versions.

Facing a serious economic downturn and wary clientele, restaurants will no longer be able to offer just one type of cuisine. “The singular-concept restaurant that does one thing will go away,” predicts Chef Eric Rivera.

In Seattle, one of the first U.S. cities hit hard by the pandemic, Rivera’s restaurant, Addo, quickly adapted – shifting entirely to delivery and takeout, using his own staff to deliver orders, and selling constantly changing experiences that ranged from $9 bowls of food to $350 seven-course meals. He tracks social media to see what people want so he can get it to them fast. “We sell everything from bread flour to toilet paper,” Rivera says. Addo’s business from mid-February to early April doubled year over year.

Rivera has little patience for restaurateurs who responded to the pandemic by laying off staff or closing their doors, rather than changing their business models. “If your creativity can’t extend past what’s on the plate, you shouldn’t be in this business,” he says.

The Algorithm Will Rise Again

“Most restaurants update their menus sometime every quarter,” Shein says. That old-school mindset will no longer work. Instead, operators may need to analyze data like amateur quants and respond to it on the fly. For instance, Shein says, in the old world, a pizza chain might struggle to keep up with deliveries at peak hours and frustrate customers with long waits. In the new world, it will need to analyze which kinds of pizza tend to get ordered at which times and start preparing them before orders come in.

Jack Li says operators who begin setting up contactless payment methods now may have an advantage later, especially technology that allows consumers to pay their bills just by waving their phones, without touching pen, paper and screens. 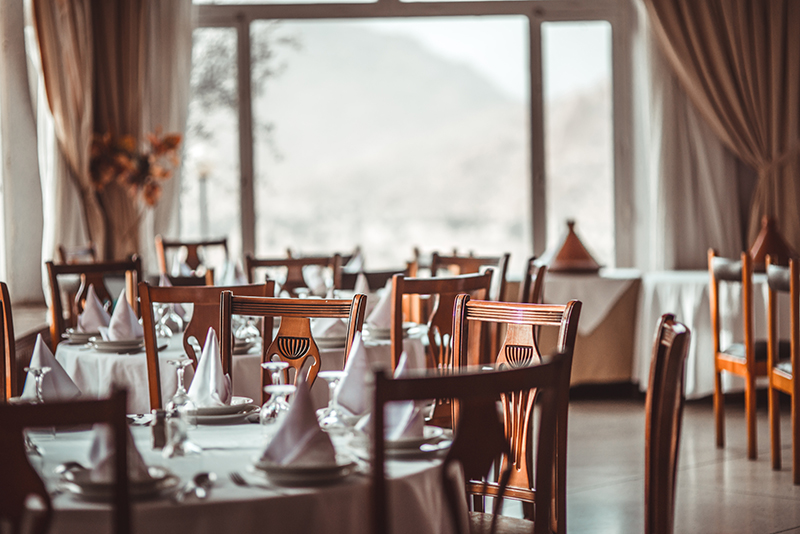 Anxious diners will want to feel comforted by the design. “People will gravitate toward restaurants that give them a feeling of home away from home and not cold, commercial environments,” says Dekar co-founder Dolores Suarez. As restaurants do more takeout, she adds, they will have separate pick-up rooms with their own entry doors, thus creating mini-fiefdoms and operations within one space.

Closed Kitchens And Small Footprints Will Make a Comeback

While the open kitchen trend has been strong for years, diners won’t want a visual reminder of the risks involved in food preparation, Grant predicts. “Mentally, people will want a break from that concern,” she says. And as fewer people eat out, restaurants’ square footage – and thus their rents – will go down, Landers predicts.

When Karen Herold of Chicago’s Studio K Creative designed Stephanie Izard’s Girl and the Goat in Chicago a decade ago, she purchased relatively inexpensive dining room chairs from a national furniture chain. In recent years, clients wouldn’t even consider doing that. “Everyone had to top everyone else,”
she says. Restaurant designs “became about what will look good on the cover of magazines.”

The pandemic will put an end to that, Herold predicts. “It will remind us that we can create great spaces that don’t have to be over the top,” she says. “Design is successful if it makes the restaurant successful.”

Hands Will Be Washed – And Watched

With all the hand-washing worries, “I wouldn’t be surprised if we start designing beautiful sinks,” Grant says. And installing more sinks – both inside and outside bathrooms – will continue the communal basin trend. They will make hand washing a public event so everyone can see everyone else doing it.

The Glass Half Full: An Optimistic Take

While many industry insiders say the post-pandemic foodservice industry will look irrevocably different than before, Jack Li begs to differ: “At its core, the industry is not going to be fundamentally different,” says Li of Datassential, a Chicago-based research firm for the food industry. He bases that prediction on roughly a dozen reports that Datassential published from early March to early April that surveyed 4,000 consumers each week. Datassential found that people’s concerns peaked in late March—with about 60% very concerned about the virus and about two-thirds definitely avoiding eating out—but then remained flat. Li points to some relatively positive news: In mid-April, the projected U.S. death toll improved over early estimates, from over 200,000 to around 60,000, and the country’s epidemic approached what may be a peak. Barring an “extraordinary event,” Li says, “we’ll see a shift in consumer sentiment.”

From the ashes could rise a stronger industry—one where employees get treated (and paid) better. After cooking for themselves for many weeks, American consumers could emerge with a newfound appreciation for restaurants and their workers—and their worth. Where to start? As the first wave of diners return, establishments will need to figure out the wants of their immediate communities and neighbors because the commuter and tourist crowds won’t return right away. “My hope is that people will go back to eating out with a renewed sense of the value of restaurants and the service they provide,” says Alice Julier, the director of the food studies program at Chatham University in Pittsburgh. “They will recognize food is worth more.”

But the key may be for restaurants and local eateries to start gearing up now for when consumers’ pent-up demand gets unleashed. Those who are ready for this far more welcomed “surge” may well reap the biggest rewards.