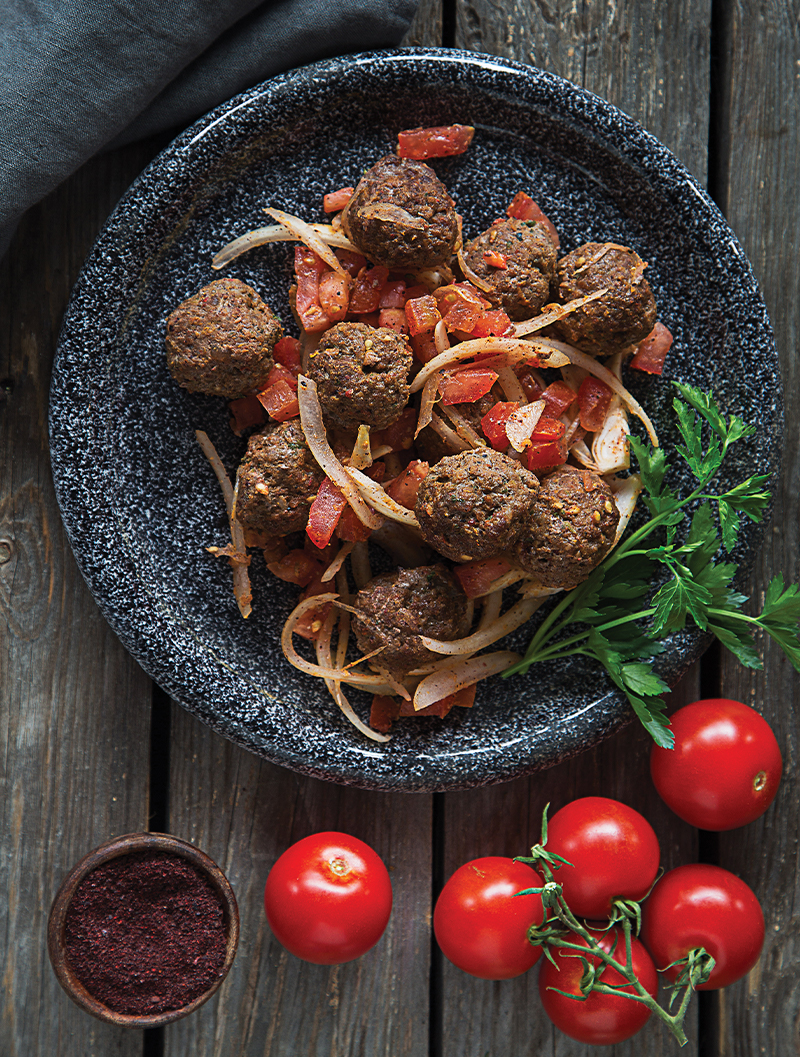 Word on getting ahead with plant-based proteins
It’s not just the same old grind with center of the plate proteins. Driven hard and fast by interest from younger consumers who bring an earth-first ethos to their dining habits, plant-based options that closely mimic their meat, poultry and seafood counterparts have muscled onto menus with an onslaught of new products set to hit the marketplace. Meat-pink burgers with bloody centers may have stoked interest, but they’re just the opening salvo.

“The number of alternate proteins in development is pretty astounding,” says Ron DeSantis of CulinaryNXT, a Connecticut-based foodservice advisory firm. “Flavor profiles and visual presentations are close to the real things. That convinces people that they’re legit and opens them to new audiences,” he says. Plant-based steaks are in the works and said to be close to restaurant-ready. 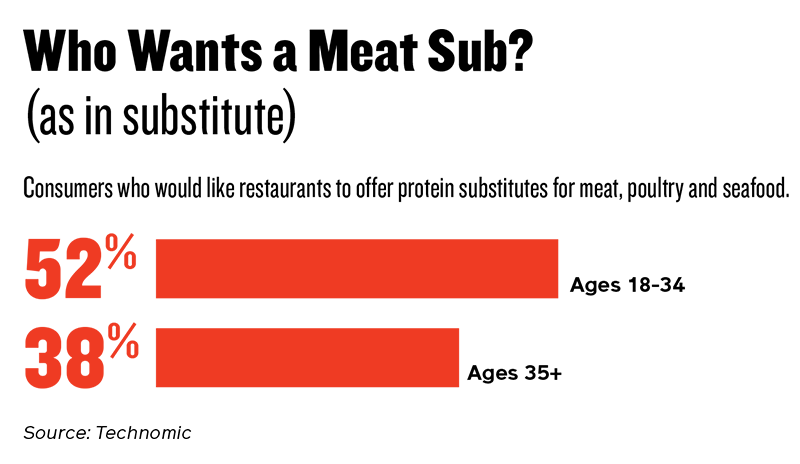 But here’s the shocker, the salient point all operators should note: it’s not vegans or vegetarians who are the heavy users of plant-based meat products. According to Impossible Foods, makers of the burger by the same name, 70% of people ordering its plant-based products are meat eaters.

“Younger consumers are in tune with the environmental impact and health pluses of plant-based choices,” DeSantis says. “As an operator, you have to look ahead and consider what’s going on with the next generation of diners. They think about food much differently.”

Interest in so-called meat analogues, which includes plant-based meat substitutes that mimic the flavor, texture and appearance of proteins, has never been stronger. With more than one-third of consumer saying they intend to eat more non-meat proteins this year, there’s big incentive for operators to include them on menus.

Products such as veggie and bean burgers, tofu, tempeh and algae-based seafood subs, such as crab and shrimp, all of which are appearing on menus, not just with increasing frequency, but also in ways that forever banish the idea that they appeal only to the health food fringers (see opposite page). In large part, this growth has been fueled by a desire to eat less meat. According to research firm Datassential, 59% of consumers go meatless at least once a week. 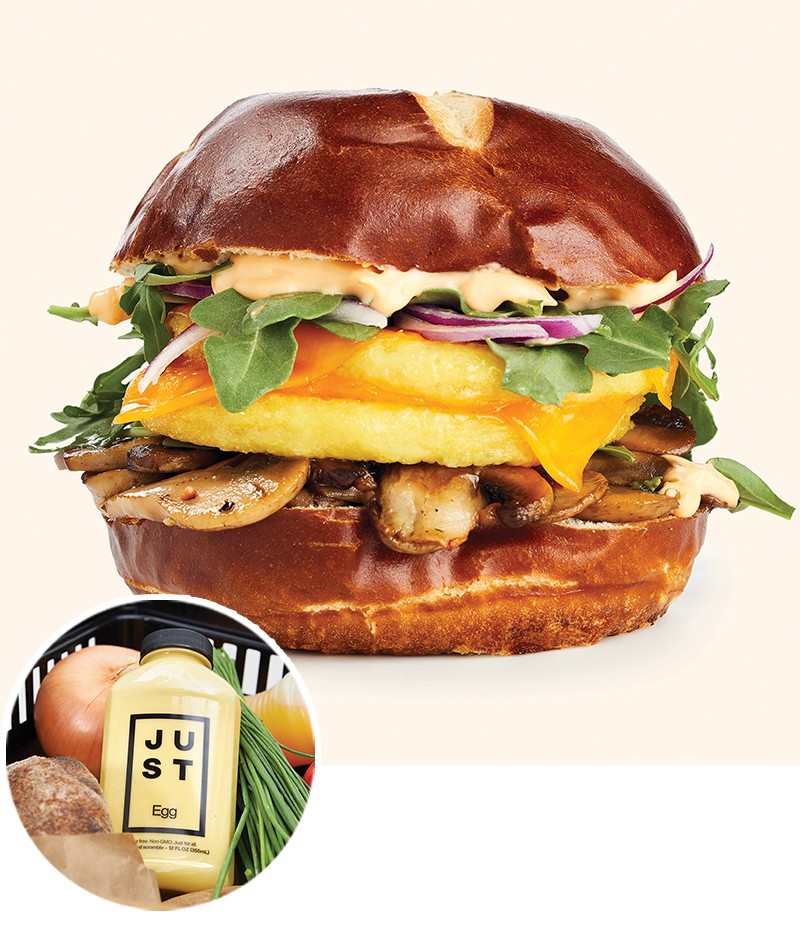 JUST Egg Patty on a pretzel bun with nut cheese and mushrooms makes for a vegan experience.

Environmental concerns aren’t just land-based, with potential species extinction a serious global issue. Farm-raised species, which help mediate overfishing, have been joined by a spate of plant-based choices. Ocean Hugger Foods® flaunts a line of seafood using vegetables that mimic the look and texture of the real deal. Think tomato for tuna, carrots for salmon and eggplant for eel.

When Akash Kapoor founded his California-based Curry Up Now restaurant in 2009, he wanted an alternative protein on his menu but was frustrated by a lack of choices. When he found a plant-based ground chicken substitute that met his taste and textural standards, he quickly added it to his menu last year.

“It’s not really for vegetarians,” he says. “They’re not looking for something that looks or tastes like meat.”

Fire Up the Grill

SAJJ Mediterranean, a nine-unit Middle Eastern brand in the San Francisco Bay area, offers a strong slate of vegan and vegetarian items. To further its roster, it recently added a kabob with ground plant-based beef from Impossible Foods as a recurring special. CEO Zaid Ayoub says it sells out each time.

“The target audience is meat eaters who want an environmentally friendly product,” Ayoub says. “They care about global warming, pollution and land use and this drives their food choices.” Thus, it attracts millennials and older diners alike.

“The flavor is earthier,” says Ayoub, who also notes that it’s easy to handle and cook.

Imagine foie gras, burgers, chicken nuggets, T-bones, chorizo and fin fish cultured in petri dishes with progenitor cells from the animals or fish they ape. It’s no longer weird science, as some companies – such as Memphis Meats, Wild Type and Mosa Meat – claim they’re on the way to making lab-grown meat commercially viable and affordable.

Labeling these products as meat or fish could kick up a lot of dust as the meat and seafood industries prepare to protect their products. At a hearing held last year, the U.S. Food & Drug Administration referred to them as “food produced using animal cell culture technology,” while proponents hailed it as clean meat or in vitro meat.

Whatever the terminology, here are some companies and products worth keeping an eye on: