Times have not always been easy for Antoine’s Restaurant, a renowned, family-run restaurant in the French Quarter of New Orleans that celebrates its 175th anniversary this year. The restaurant has endured three wars, the Great Depression and Hurricane Katrina, making family squabbles seem like nuisances in comparison.

“We have a very close family in my generation. We like each other, and that’s a huge advantage,” says Rick Blount, CEO and a fifth-generation descendant of the restaurant’s founder, Antoine Alciatore. “We argue, we fight, but we’ve always been able to come to a consensus. Some families can’t.”

Family pride, dedication and a rich history are sources of strength and integrity for the restaurant. They’re also the roots of conflict, as sibling shareholders vie for influence and disagree about how the restaurant should be run. Balance over the years, however, has been integral to the operation’s longevity and ultimately its success.

As ownership of the restaurant passes down through generations, family politics have become more intense and complicated, according to Blount. Right now, he and his five siblings have equal ownership. However, in the next generation, there’s an odd number of children, so ownership will be split unevenly.

“Some of my siblings have no children. I have two children, and my older sister has one child,” Blount says. “I don’t know how the ownership in the next generation will work out. There is an infinite number of possible scenarios.”

Blount also has a stepchild from his second marriage, and if he wants to give her a stake in the business, he will need to propose a rewriting of the company’s bylaws. “The legal part is easy. It’s the morality part that’s hard, trying to figure out what’s right for this family,” he says.

There’s also uncertainty about whether or not the next generation will be able to work together productively. One of the compromise moments came in 2009, when Blount’s first wife died. He was struggling to run the business and be a single parent, so he proposed renovating a space in the buildings that include the restaurant where he and his children could live.

“That way, I could be at work and at home all the time,” he recalls as his rationale. His sisters thought it was overstepping—a perk—and that there was no way that all the siblings could ever have equal pieces of real estate within the buildings. “I tried to convince them, but I couldn’t, so I didn’t do it. In the end, they were right, and I would have been miserable living so close to the restaurant.”

Grooming the next generation to take over can be a challenge. Blount hopes that his eldest child, Casie, 25, will one day run Antoine’s. She studied business, management and hotel restaurant tourism in college and now works in the catering department of the Audubon Nature Institute in New Orleans.

Though she grew up working in various roles at the restaurant—taking reservations, coordinating banquets and managing social media—it’s critical that Casie gain experience elsewhere, he says. “We need people who have made mistakes, failed and learned from that. Casie can’t make mistakes at our restaurant, because she can’t get fired there. She needs to cut her teeth elsewhere.”

He also acknowledges that Casie could decide to pursue some other passion—perhaps one that doesn’t require managing the expectations of her family members, or that doesn’t require working on Saturday nights. “The restaurant business is tough. You work all the time, and it’s uncertain.”

It’s also possible another leader may emerge among Casie’s cousins, as she is one of the oldest in her generation. But sometimes the best leader rises to the occasion, like Blount’s grandfather Roy Alciatore, the third-generation proprietor of the business.

Alciatore’s two siblings had no interest in running the restaurant, and he was “a geek,” according to Blount. He loved Morse code and wanted to work with ham radios on a steamship, not in a restaurant.

When it fell to him to take over for his father, “he thought it was impossible. He didn’t have any of the personality or passion that his father had. And yet, he was phenomenal at the job. Over 40 years, he took all the pieces that his father and grandfather had built and improved them twentyfold.”

Roy Alciatore brought international acclaim to the restaurant. “It’s not always the obvious attributes in the next generation that turn out to be the decision-maker,” Blount says. “The men who ran this business in the first three generations were totally different people.”

Liz Logan is a freelance writer based in New York whose work appears in local and national publications. 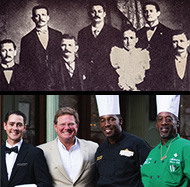 At A Glance: A 175-Year-Old Family Restaurant

Antoine Alciatore, an 18-year-old French immigrant with a passion for his native cuisine, founded his eponymous restaurant in 1840.

When Antoine became ill in the 1870s, his wife, Julie, (opposite page) managed the restaurant. After Antoine died, the restaurant was led by his son, Jules, who had apprenticed at several top kitchens in France. He was chef at the renowned Pickwick Club in New Orleans before taking the reins at Antoine’s. He’s credited for inventing oysters Rockefeller.

In the third generation, Jules’ son Roy took over and ran the restaurant during the Prohibition era, the Depression and World War II. CEO Rick Blount, is Roy’s grandson and the fifth generation to run Antoine’s.