Giving takeout packaging an environmentally friendly makeover may seem like an easy task – until you discover that growing numbers of customers have very strong views on the matter. Just think how quickly straws became a pariah last summer. 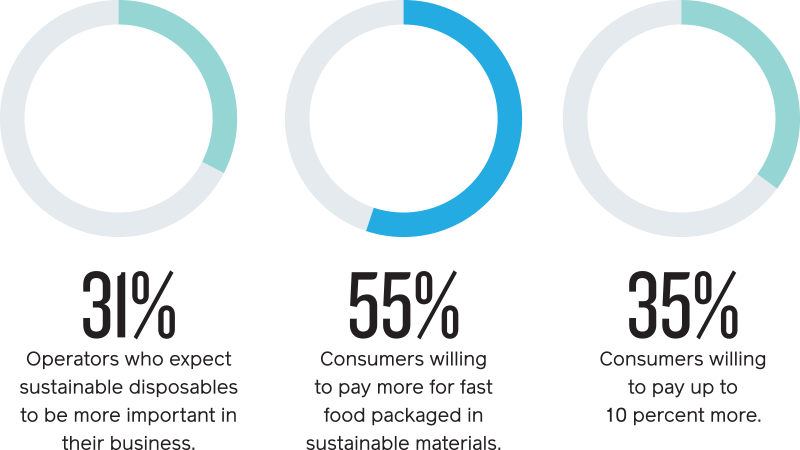 When decisions to go green aren’t made for you (think cities that have banned Styrofoam, such as San Diego; plastic utensil bans in Seattle; and even banning plastic straws at Disney World), an overhaul can be strategic. A plan should entail different approaches, including ones that will resonate the most among core customers. Why? Because building loyalty among those who see sustainability as a concern can impact business. To begin, consider these ideas.

At Ancolie in New York City, salads, cold pasta, eggs and pastries are put in glass food packaging instead of plastic. The cost is built into the food costs, but the packaging can be reused at home or returned to the restaurant for a $2 credit. Salud Juice in Long Beach, California, uses glass for juices that’s tied to a rewards program. Diners who return 10 bottles earn a free juice. Salud owner Angela Almaguer says the $1 to $2 increases she built into the prices were quickly accepted; in part, because the bottles are eye-catching, while the glass itself preserves the subtle nature of her citrus flavors better than plastic.

2. CUT PLASTIC THROUGH A WIDE SWATH

Revival Food Hall, a 25,000-square food emporium in Chicago, has launched an ambitious recycling program that includes discounts for consumers who bring their own cups, a bag-by-request only policy, and a partnership with a local organization called Open Water Aluminum, to serve water in aluminum cans that can be reused or recycled. All 17 food concepts are also required to use eco-friendly and compostable containers. Revival’s general manager Tim Wickes estimates the food hall has reduced 94,000 water bottles over a year, and that Revival’s need for plastics of all varieties has plummeted.

Adam Rosenbaum, CEO of the multi-unit Meatball Shop concept in New York City, puts eco-friendly packages through a gauntlet of delivery tests to ensure they can take the heat. Will a package leak if a driver flips it over? Do lips and lids snap tight? Does it hold food in place, preserving an appealing look? Rosenbaum recommends operators lean on the abundance of different shapes, sizes and bowls, so that to-go customers can experience the same look and feel as in-restaurant diners.

At Mason in Miami, owner Renee Nasajon sends to-go orders out in a blend of bagasse (a byproduct from sugarcane) and wheat straw packaging, which the company claims will often disintegrate in less than 30 days in a commercial composting facility, or 90 days via backyard composting system. Nasajon says the added 10 to 20% cost of the packaging has been outweighed by positive feedback from her eco-friendly customers. At Salud, Almaguer uses compostable bags and plant-based containers that offer the look and durability of plastic.

5. ONE STRAW DOESN’T FIT ALL

Sometimes a strawless cup does the trick. Other times, it depends on the concept. At Noosh in San Francisco, Beverage director Andrew Meltzer found hay straws, which cost as low as 3 cents each, hold up in cold drinks, while Salud buys corn-based polylactic acid (PLA) straws from Ingeo in bulk to pair with its smoothies. But Rusty Pelican in Key Biscayne, Florida, adopted a paper straw-by-request policy and created a straw-free cocktail to honor its link to the “Miami Is Not Plastic” campaign. “You have to take it step by step,” says Wickes. “Not everyone wants to be educated while they are dining, but we can all do some basic things to help out. We can be a kick starter for something good.”