The guardrails on American concepts are coming off, allowing lesser-known spices to score on menus that once played it safe.

Today, a kaleidoscope of spices and spice blends from the Middle East, South Asia and Japan are making headway. It’s OK if a diner does not know what a particular spice is, let alone be able to pronounce it.

Even the standard issue is no longer standard. Take paprika: Do you want it smoked, sweet or spicy?

“When I started in culinary school in the early 1990s, even fresh herbs were hard to get,” reflects Nathan Beauchamp, chef-owner of The Fainting Goat in Washington, D.C. “The world of spices has completely changed for the consumer and the chef.”

Spices and spice blends once rare outside of restaurants serving food of a specific country or region have become so familiar that chefs without cultural allegiances are leveraging these flavors on all parts of the menu – even dessert. Last year, the five fastest-growing spices on menus were star anise, roasted cumin, anise, furikake and turmeric, according to market research company Technomic.

Understanding the commonalities between the flavor profiles of different cuisines should be the guiding principle in effectively using these spices. “The blueprint of spice blends is often the same,” explains Heidi Krahling, chef-owner of Insalata’s in San Anselmo, California. “Take baharat and curry powder: their flavor profiles can be uncannily alike, but each culture takes it to its own place.” Here are five ways to turn up the flavor.

1  Spice Up Seasonal and Local

When San Francisco chefs Gayle Pirie and John Clark took over Foreign Cinema in 2001, they planned to continue cooking with local and seasonal ingredients. But their 18,000-square-foot location in San Francisco’s Mission District, with its bar, restaurant and enclosed patio, was so big that a menu based solely on seasonal food got lost. Their solution: remove muted dried herbs and replace them with a broad blend of spices. 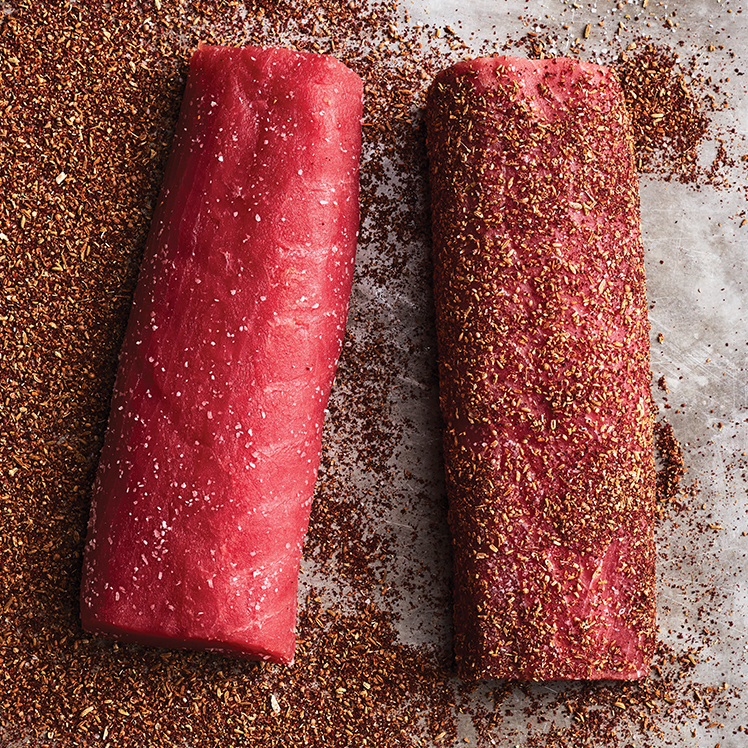 “A Provencal brandade got green chilies and toasted cumin,” Pirie explains. “A traditional seafood stew got a fenugreek broth. We were supplying everyday things with a little twist, a unique kind of bite that you couldn’t put your finger on.”

Today, ras el hanout, a North African spice blend that means “top of the shop,” perfumes quail and Madras curry fried chicken. A mix of four peppercorns (green, white, black and Sichuan) blended with fennel forms a rub for duck breasts. One year, the chefs bought ajwain seeds because of their similarities to cumin and caraway. When a friend gave them a bag of cacao nibs, they were inspired to blend the nibs with ajwain, creating a mole-inspired seasoning for steak.

Instead of overwhelming the local produce, the spices remain supporting actors. Daily staff tastings are essential to ensure some spices – like Sichuan peppercorns – haven’t become overpowering. “The key is how to support the main ingredient and not run it over,” Pirie says. 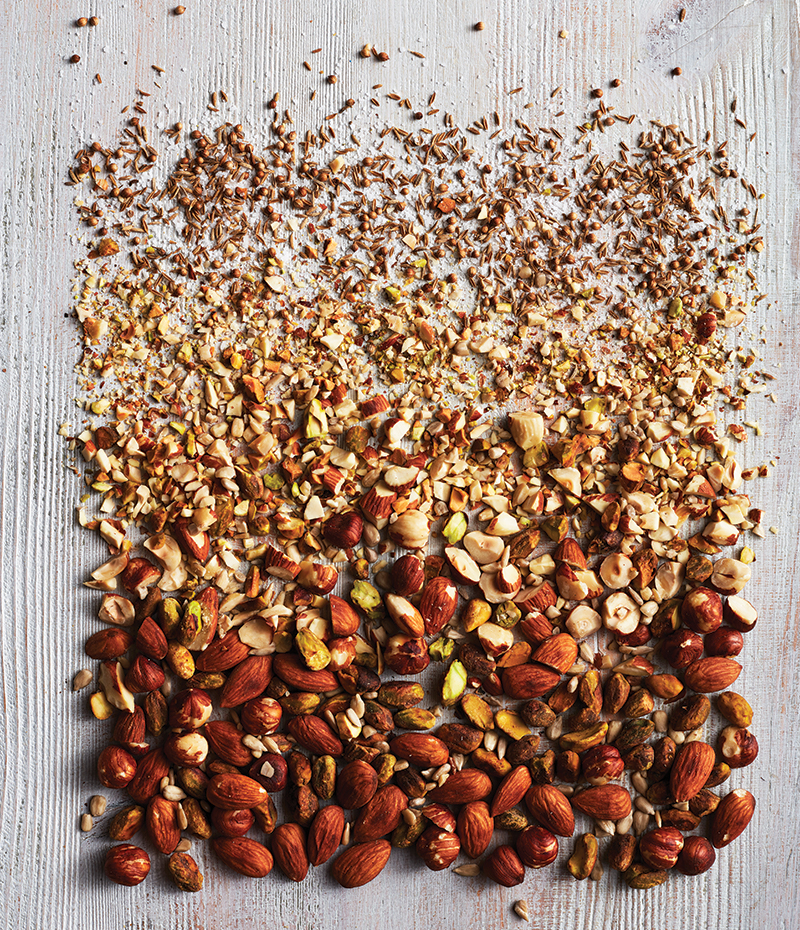 When Sarah Schafer cooked at Eleven Madison Park in New York City, the restaurant shared a backdoor with Floyd Cardoz’s Tabla, allowing her to catch glimpses of the Indian restaurant’s glassed-in spice room and watch cooks working with those seasonings. Some of that spice envy has been remedied at Irving Street Kitchen, Schafer’s restaurant in Portland, Oregon, where she makes her own baharat, a blend of chilies, cumin, coriander and warm baking spices.

Even though baharat is more common in Arabic cuisines, Schafer finds the spice blend works well on her North American menu, where she uses it in a sherry vinaigrette to accent fried Brussels sprouts or drizzles it over flatbreads and lentils. Cooking can mute spices, but the vinaigrette keeps flavors bright, Schafer says. She also ensures that her cooks blend and grind only what they can use, as spices do have a shelf life, especially after they’re ground, Schafer says.

Even though The Fainting Goat is an American gastropub, Beauchamp makes his togarashi—short for “shichimi togarashi,” a Japanese seven-spice mixture—for the same reason Schafer makes baharat: brighter, fresher flavor.

Made weekly, the blend is comprised of orange rinds dehydrated at the restaurant and dried red peppers from a local farm. While traditional togarashi contains sesame seeds, Beauchamp adds benne seeds for a nuttier flavor. He also ups the zing with Sichuan peppercorns. And like Schafer, he uses the spice blend in untraditional ways, sprinkling it over avocado toast or blending it into mayonnaise to complement his perennially popular fried chicken sandwich served with miso pickles. “I like the sweet savory-ness of it, and it’s a little spicy as well,” he says.

Global spices have grown more popular because they draw out the innate flavors of vegetables. 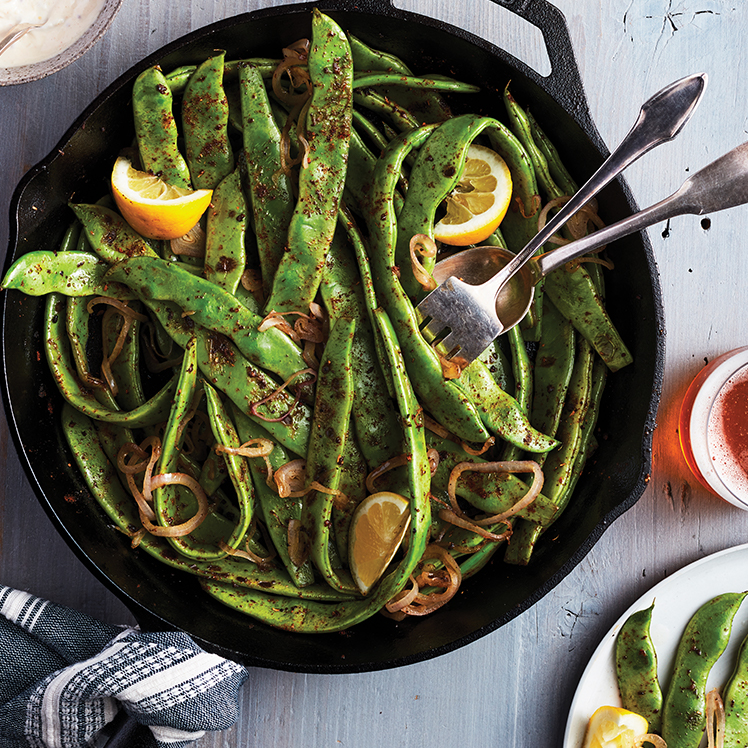 At Bar Beau, an all-day cafe in Brooklyn, Executive Chef Gemma Kamin-Korn created a dish, highlighting carrots, for a special dinner. To pique the interest of diners, she relied on a range of spices: In addition to the buttery carrot purée she serves with udon noodles, she also makes a frico with grana padano cheese, madras curry powder and nigella seeds.

“It’s a velvety, luxurious purée with fun flavorful flourishes,” Kamin-Korn says. “The vegetable is a complement and vehicle to the spices you’re pairing it with – they’re working in tandem.”

At Insalata’s, Krahling main dining room stays true to Mediterranean flavors – she may have a Turkish spoon salad and an Italian pasta on the menu, but not on the same plate. Yet at Insalata’s take-out counter, Krahling can offer more experimental fare, serving Asian-inspired noodles and Italian meatballs next to grain salads accented with harissa or za’atar.

The reason? Variety generates repeat visits. “A lot of our takeout customers are eating from our takeout several times a week, as opposed to the restaurant, where customers might come in every few weeks,” Krahling says.

Parents may order noodles for their kids, then reach for lamb grilled with chermoula for themselves. Like the lamb, grain salads also get a flavorful boost from spices. Housemade harissa – containing peppers, coriander, caraway and cumin – forms the base of a ginger-accented curry vinaigrette used on quinoa or toasted farro, giving the grains a flavorful boost that holds up to refrigeration. “Takeout food needs to be familiar and adventurous,” says Krahling. 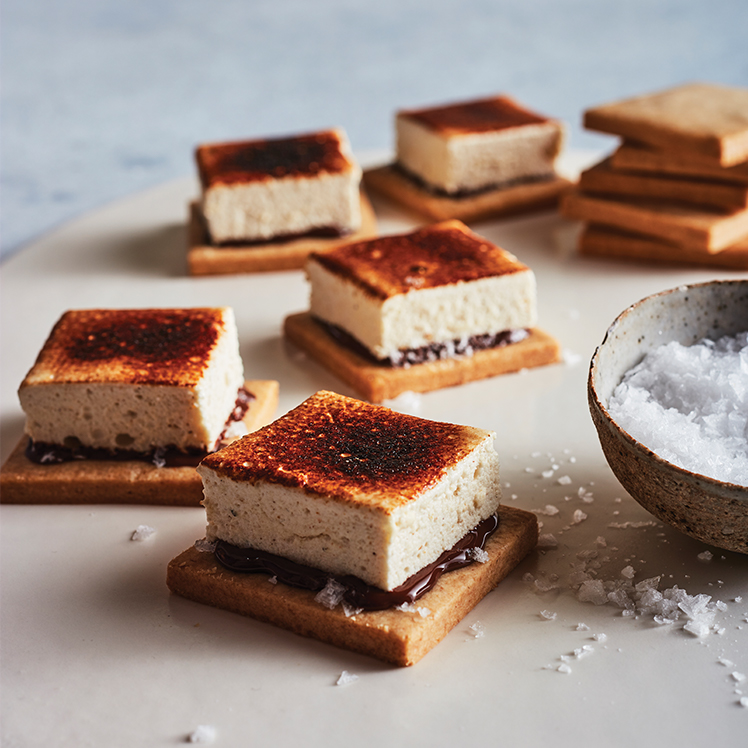 The pastry side of the menu hasn’t ignored the explosion in savory spice blends. At Longoven in Richmond, Virginia, co-owner/pastry chef Megan Fitzroy Phelan was drawn to using ras el hanout in a dessert after honeymooning in Fez, Morocco. There, vendors created different blends for cooking meat or fish – so why not make a blend suitable for dessert?

Inspired by a smoked cinnamon marshmallow she’d made at Daniel in New York, she adds a ras el hanout blend containing spices, such as cumin, ginger, coriander and cloves, to the marshmallow at the end of the mixing process, so she can check the flavor before pouring the mix into a pan to let it set. To complement the sweet-savory flavors, she pairs it with whole wheat sables, smoked milk chocolate and flaky salt. Sometimes adding sweetness unexpectedly to spices such as cumin can bring out flavors you may have not noticed before, Phelan explains – and she hasn’t stopped with marshmallows.

THE GLOBAL PANTRY, FROM ALEPPO TO ZA’ATAR