Once the province of bars and convenience stores, spiced nuts, beef jerky and Scotch eggs are coming out of the kitchen at full-service restaurants dressed up with pimenton or garam masala. Former freebies are now ending up on the check, justifiable with upgrades like warm, citrus-marinated olives and housemade farm bread and butter trifle. On the heels of the small plates trend, diners are shifting away from traditional meals where snacks are enhancing less structured meals. Only 7 percent of revenue comes from afternoon snacks, according to research firm Datassential. But it shouldn’t be written off. “Restaurants need to recognize that appetizers and snacks can be part of a meal or a whole meal,” says Darren Tristano, president of foodservice research firm, Technomic Inc.

Demand for smaller portions and the ongoing increase in adventurous palates have created a dining culture of distinctly American tapas and mezes.

“I don’t think major portions are what people want,” says Executive Chef Chris Whaley, co-owner of The American Local in Portland, Oregon. “We’re putting a lot of great flavors in front of them and they’re going to want more of it.”

Whaley and his partner, Jenny Nickolaus, spent five years planning their concept, inspired by Japanese pubs known as izakayas that serve drink-friendly snacks. Their food, however, is a cultural mashup of dishes like pork belly with Sriracha and maple and flank steak with horseradish and scallion. Snack menus can reinvigorate the back of house like at The Farm House in Nashville, Tennessee, where Chef-owner Trey Cioccia gets to have a little more fun than with his small plates or entree offerings.

“This is the way I eat, tasting things all day long,” he says. Pimento cheese, a Southern staple, transforms into pimento beignets; pigs ears are served crispy, sweet and sour. Placement can make an impact, too. Many chefs are filing snacks into separate headings or weaving them into traditional appetizer or small plate lists. Snacks have replaced appetizers at Bluebeard in Indianapolis with dishes like fruits and vegetables pickled in-house, and nuts that are spiced, candied, smoked, salted and fried.

“They are a good way to start off dinner when you’re meeting up with friends and just starting to think about eating,” says Bluebeard’s Chef-owner Abbi Merriss. “They’re fairly small, so you’re not really going to start filling up.”

Word it right, and you can make bank. At Red Cow in Minneapolis, Executive Chef Trevis Langley says the ahi tuna crisp looks pricier at $11.50 but is one of his lower food cost items. “It’s a small portion, but the perceived value is very high because of the ingredients,” he says. But before servers even hit the floor, a pricing strategy needs to be considered. Snacks also don’t necessarily have to compete dollar-to-dollar against appetizers or small plates. At The Spence in Atlanta, snacks like housemade ricotta with seasonal fruit and grilled bread ($10) and cashew butter with crudites ($9) out price any of the sides, such as $7 fried Brussels sprouts.

Snacks are also a smart place to use vegetables left over from a shift or leftover bacon bits to flavor butters for a special breadbasket. Even a small amount of brisket can elevate a simple rice ball or help stud an order of stuffing with herb puree.

“Food is expensive today, especially proteins and vegetables,” says Whaley. “Starches are where you make up on that. We try to use every bit of what we buy.”

Part of the draw of snacks comes from chefs riffing on familiar staples. Some items, like popcorn—low in cost and labor—can be tough to justify, so it becomes a way to help build a concept’s brand. At Ocean Prime, a Cameron Mitchell restaurant in 11 states including Ohio and Arizona, truffle popcorn served complimentary at the bar adds value and reinforces the seafood and steak concept.

Red Cow, a neighborhood tavern concept, puts a spin on the everyday but uses a local favorite to get customers hooked. The restaurant serves Barrel O Fun corn puffs with a coating of caramel and bacon for $4.50. The snack gained such a following that it has become a signature dish on the full menu. “It’s social and gets the taste buds working,” says Langley. It sits alongside other snack favorites such as Scotch eggs, cheese curds and beef jerky with larger shareables like the artisan cheese board.

Upscale concepts can benefit from squeezing snacks onto the menu. The Spence, for example, serves snacks like smoked egg with crispy rice and green onion ($4)  and manchego cheese with olive oil-fried marcona almonds ($7).

Artisan, a modern American restaurant in Paso Robles, California, draws in the local winery crowd, which means high expectations for solid bar snacks. But not all snacks need to stay at the $6 price point, proven by happy hour quick hits like bacon tater tots ($5) that star alongside wild-caught shrimp tacos ($14).

The Tasting Counter, a Somerville, Massachusetts, prix fixe fine dining restaurant, pulls in revenue with a late night snack menu. On Fridays and Saturdays, the restaurant rolls out $5 items after 10:30 p.m., such as crispy stuffed fried rice and a ginger ice cream sandwich.

“The whole snack idea is more approachable eating,” says Executive Chef Kyle Forson of The Spence. “It gives you a lot of freedom—people want to taste as many items as they can.” 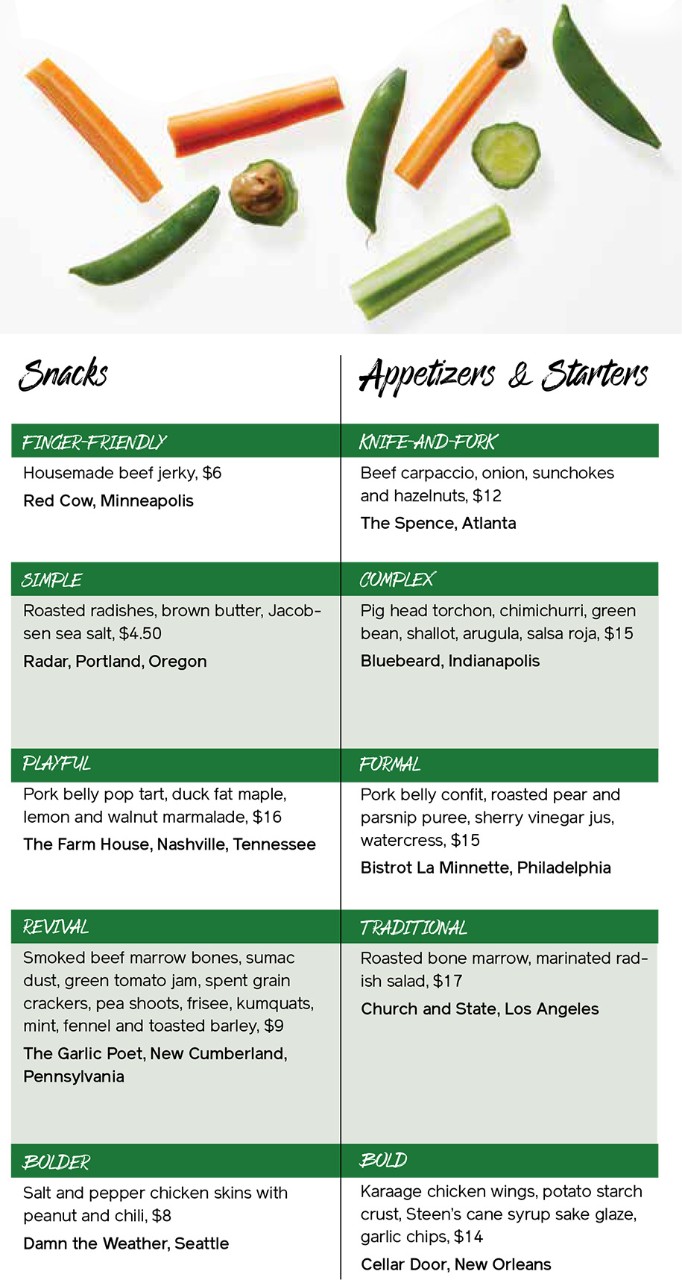