► Nonessential travel and closed borders don’t apply to menus. The essence and flavors of another country can come by way of ingredients – just as they always did pre-pandemic. But perhaps that’s more important now than ever, as a way to inspire servers to sell and customers to order. 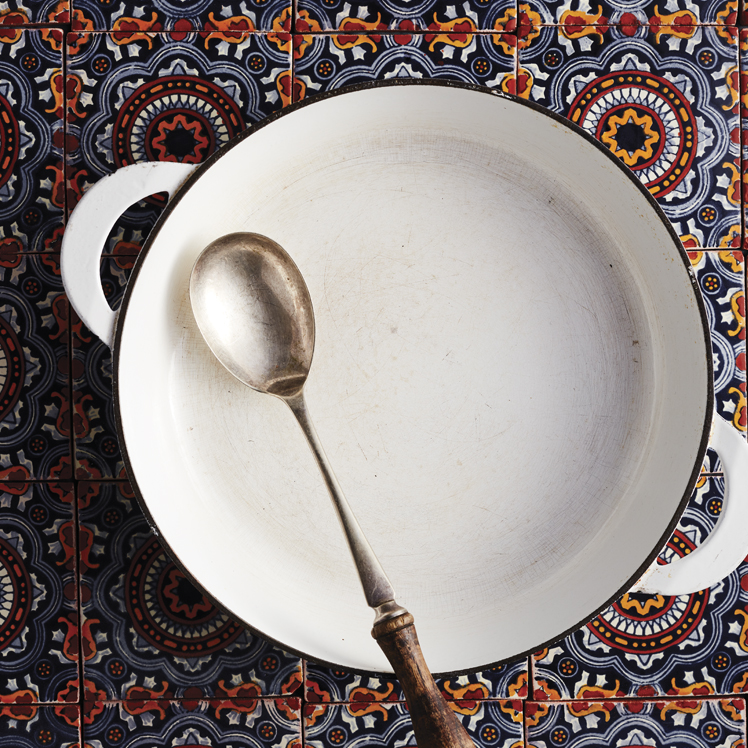 Take Portugal, which is a having a culinary moment. It’s a natural progression. America’s fondness for Italian led to further exploration of the Mediterranean, then Spain and most recently, the Middle East and Israel.

Chefs are expressing such inspiration at new restaurants, including Suzanne Goin—who, despite the pandemic, is scheduled to open Caldo Verde in Los Angeles around late fall. Like other restaurants, she faced challenges, but has been determined to open with a menu inspired by travel before coronavirus.

“The restaurants I went to in Portugal served perfectly fresh fish and seafood, whatever was available, and much of it perfectly grilled, so we are applying that same mentality,” says Goin, whose menu plans to showcase grilled fish, Portuguese sausages and other inspirations from the Iberian coast.

Recipes in this Story

All the Fish in the Sea

During two visits to Portugal in 2019, Marcos Campos, executive chef at Porto in Chicago, sampled an impressive array of seafood offerings rarely found in the U.S. Although there’s plenty of grilled, steamed and deep-fried options, local diners also crave lamprey eels marinated in vinegar and blood, and bread-based seafood stews like acorda de lavagante made with poached eggs, lobster, shrimp and cod.

At a time when American diners are down with seafood small plates, conservas have become open-and-serve novelties. Their brininess inspires beer and cocktail orders. Their handsome tins make for memorable presentations. And their versatility allows for simple or elaborate preparations for dine-in or takeout.

Campos and Bonhomme Hospitality Group continue to pave the way with another Iberian Peninsula-focused restaurant – Mama Delia – which recently opened in Chicago. It includes 60 outdoor seats, allowing for social distancing and an ultramarino (Spanish for neighborhood gourmet market) offering foods he sampled in Portugal, such as the seafood conservas. At Porto, Campos serves 15 different conservas made by Minerva, a Portuguese company that’s been preserving fish, such as zamburinas and mussels in escabeche, the same way for nearly a century. His offerings run the gamut from spicy tuna to his favorite: mackerel in olive oil with pickles.

“It’s a perfectly clean mackerel confit in piri piri-infused olive oil,” he says. “They add some pickled vegetables – carrots, onions and peppers – to add a touch of acidity to cut through the fattiness of the mackerel.” Campos’ conservas are served straight up with crostini, a rarity that has helped him stand out.

Bring in the Tin

It’s telling that Portuguese chefs revere the simple sardine. Even chefs like Eric Banh, who arrived in Portugal with an aversion to them, fly home as born-again converts.

“These were plump and packed in high-quality olive oil, and I fell in love with the humble little fish,” says the Vietnamese-born Banh, who tired of them after eating unending quantities at a refugee camp in Malaysia on his way to Canada.

Because his restaurants Monsoon and Ba Bar in Seattle and other locations are either temporarily closed or operating at 50% for dining in, the menu is streamlined for fewer items. But when sardines rotate in, they’re served the Portuguese traditional way—on cornbread or as a riff on banh mi, with Chinese sausage on a baguette. He also adds sardines to fried rice for their distinctive umami flavor.

In Matosinhos
Marcos Campos recommends the açorda de lavagante, a bread-based seafood soup made with lobster and lamprey.

A Head-to-Tail Way of Life

David Santos of Um Segredo Supper Club in New York vividly remembers helping his Portuguese uncle, who was a pig farmer, choose a pig to slaughter for the first time at age 8. “While the men prepared for slaughter, the women prepared the rice for the morcilla, along with all the aromatics and spices needed.”

At Um Segredo, he boils pig heads to make soups and stews. Then, the ears and snout are grilled and marinated with raw garlic, parsley, vinegar and olive oil. The result is pig’s head salad and pork neck bone platters (ossos).

The braising liquid is saved to cook other meats and vegetables, or as a base for stews. 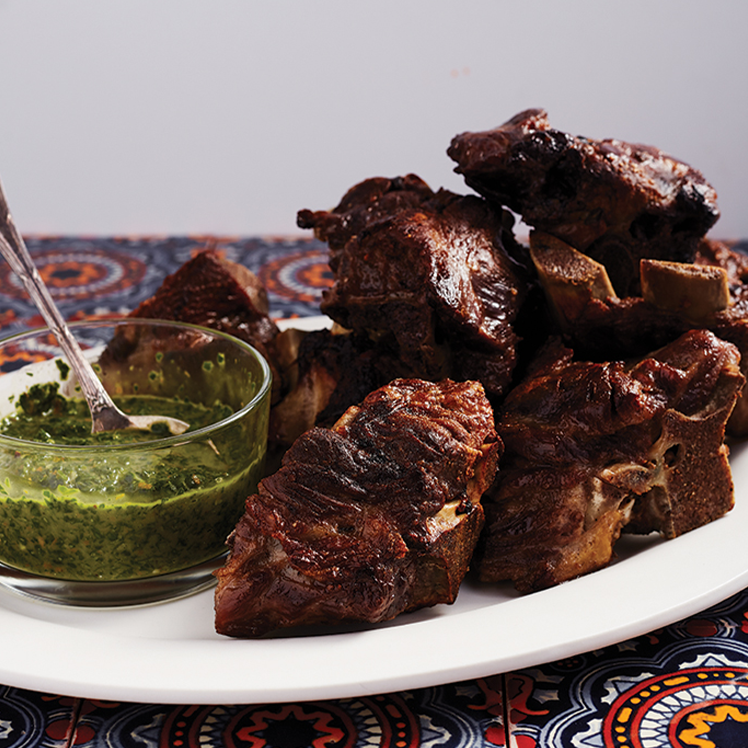 Bacalao: this dried and salted cod, often used in croquettes, can add briny salt and umami flavors to stews and rice dishes.

Tremocos: these brined beans are sold as a salty bar snack or mixed with rice. 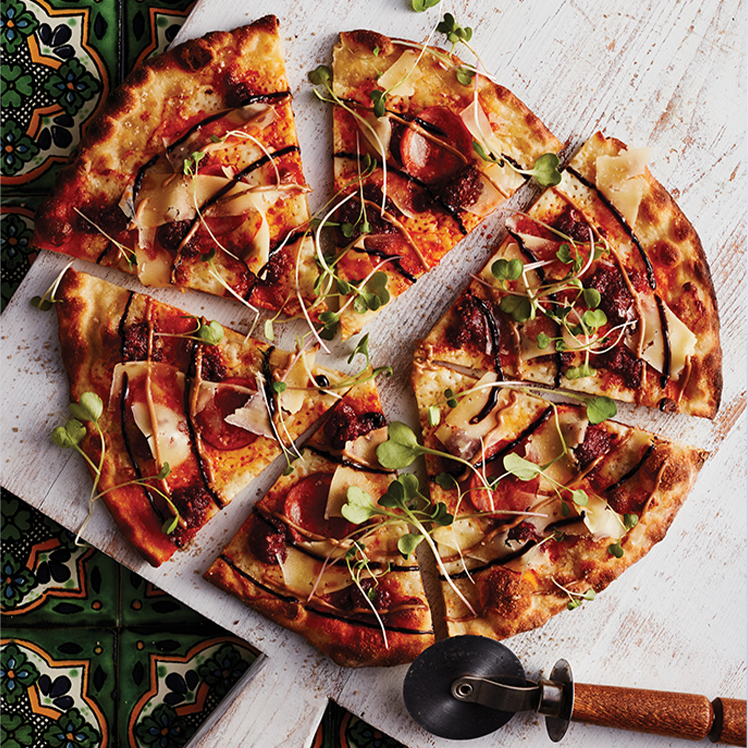 There’s also Portuguese charcuterie, such as garlicky linguica, flour-filled farinheira, or chourico, Portugal’s paprika-heavy chorizo. Or defy convention as LaSalette in Sonoma, California, does with ground chourico to coat day-boat scallops instead of bacon.

Portuguese sheep-milk cheeses – azeitao, nisa or estrella – typically are not cooked with, but that didn’t stop Santos, who has served salt cod mezzaluna (half-moon shaped stuffed pasta) with a Serra de Estrella emulsion.

Since Santos temporarily closed his restaurant because of the pandemic, he’s been cooking private dinners and thinking of how Portugal will influence the next concept. “Like so many others, I can’t wait to go back to Portugal again.”