It’s a brave new world for pork. Chefs hail the nose-to-tail movement forged over the last decade for finally killing off that eye-rolling phrase “the other white meat.” The obsession with bacon and pork belly has peaked at near maniacal levels, while charcuterie and salumi are emerging from dry curing rooms across the country. Even the U.S. Food and Drug Administration gives the thumbs up to cooking chops to a juicy 145 F.

If pork has a problem today, it isn’t demand—it’s supply. A hog has only so many parts, which can be challenging to keep up with demand. “Three pigs only give you six bellies” says Chris Shepherd, chef-owner of Houston’s Underbelly. “Once you run out of six bellies, you’ve got to do something else.”

The solution: Get creative with lesser cuts. In the same way that chefs transformed diners’ views on pork belly, some operators are finding that creativity in the kitchen combined with a good story gets diners on board.

To keep up with the daily rotating menu at Underbelly, Shepherd partners with a local farmer to crossbreed Berkshires and Large Black heritage hogs. The result is a larger breed with good intramuscular fat, which translates into more meat for his money.

In his braised pork dish, thit kho, a tribute to Houston’s Vietnamese population, Shepherd uses pig face. The meat from the skull goes in an immersion circulator for 48 hours before it’s braised in a stock with cinnamon, star anise, sugar and fish sauce. A $20 pig head can yield 30 servings at $14 apiece.

Once you cross that hurdle, the options are limitless. Lesser-used cuts from fresh ham, like pork sirloins or eye rounds, can go on the menu rather than just grinding them into sausage, says Rob Levitt of Chicago’s The Butcher & Larder.

A pork top round, Levitt says, can be used for sandwiches. “You can roast that thing whole like a pot roast and shave it thin like a French dip-style sandwich. You can cut it up for kebabs, or slice it thin and it makes the best schnitzel. And that’s just one cut.”

The eye round, he says, can be used like pork tenderloin, except it’s “way cheaper because nobody knows what it is.”

Be Your Own Butcher

There’s a bright future for “sauce butchers,” says Kari Underly, a Chicago-based third-generation master butcher and principal of niche meat consultant agency Range Inc. The term refers to in-house meat cutters that can do it all: from fabricating a pig and aging charcuterie to making stocks and sauces.

“Chefs want to highlight the skill of having a butcher on-site and being able to say, ‘We make food with our hands, including meat,’” she says.

The trend is becoming popular enough that a nine-month meat academy is in the works. The course will steep students in the art of butchery and certify them for the kitchen, Underly says.

Butchery knows no bounds in Memphis, Tennessee, where Aaron Winters breaks down five hogs each week for restaurants Hog & Hominy, Andrew Michael Italian Kitchen and the cafe at Porcellino’s Craft Butcher. No bit of pork is left behind, whether it’s the bones for stock at the restaurants, or the ears, which go into a Buffalo pigtail appetizer at Hog & Hominy.

“We also sell the bones for people to make the stock at home,” Winters says. “Five pigs a week makes a lot of bones.”

It might sound counterintuitive, but more value and flavor comes from shrinking whole pork muscles. Due to higher water content, pork can’t dry-age as long as beef, but similar enzymatic reactions occur in the meat at shorter lengths of time, boosting flavor.

Winters wraps a percentage of his pork loins in cheesecloth and hangs them in the walk-in for a week to 10 days. With good airflow, they itensify in flavor. They’ll lose up to 10 percent of their water weight, but he can cut porterhouse chops and sell them at $12.99 a pound— two dollars more than his regular chops.

Executive Chef Craig Deihl of Cypress in Charleston, South Carolina, has aged chops up to 20 days.

“The meat structure is really tight,” he says. “The aroma is a little bit nuttier and a lot more porky, as long as we leave the skin on. The fat is protected and shows very little sign of rancidity.”

They’ll sell for $12 a pound at Artisan Meat Share, and at Cypress, with good sides and a finishing sauce, for $30 a chop.

Snacks, appetizers and shared plates are an outlet for experimenting and an easy way to get traction on pork dishes.

“It’s a way to show people these really cool cuts,” says Winters. At Porcellino’s Craft Butcher, carts supplement the main menu. Out of 15 to 20 dishes a night, at least four come from his pigs—anything from involtini to tacos to boudin balls.

He likes to cut out the tender spider steaks, aka the “oysters,” from the round, cook them in a pastrami seasoning and serve them on a bed of braised cabbage. He gets 10 spiders a week out of his hogs, and they sell at $6 apiece. “It’s a neat little plate,” he says. “Maybe two bites.”

These cuts carry a novelty value, but someone has to educate the guest. “There has to be someone to tell the story of the cut,” Winters says. “When someone comes in and sees some of the different cuts, it starts the conversation. Our customers are very curious. Most of them enjoy seeing new and different cuts.”

He likes to cut out the tender spider steaks, aka the “oysters,” from the round, cook them in a pastrami seasoning and serve them on a bed of braised cabbage. He gets 10 spiders a week out of his hogs, and they sell at $6 apiece. “It’s a neat little plate,” he says. “Maybe two bites.”

Michael Scelfo, chef at Boston’s Alden & Harlow, doesn’t need to do the big sell for pigtails and clams, which is among two to four nightly shareable pork dishes. The menu changes daily, but the pigtails have been a constant since he opened last year.

The shellfish is cooked with white wine, garlic, parsley, Calabrian chilies, olive oil and butter. All the ingredients are then folded into the hickory-smoked braised pigtails. Wood-grilled crostini brushed with chili-pesto puree accompanies the $17 dish. Scelfo sells up to 25 per service.

“I don’t think people even do a double take when they see pigtails on the menu,” he says.

Mike Sula is a James Beard award-winning writer and restaurant critic for the Chicago Reader. Follow him on Twitter @MikeSula. 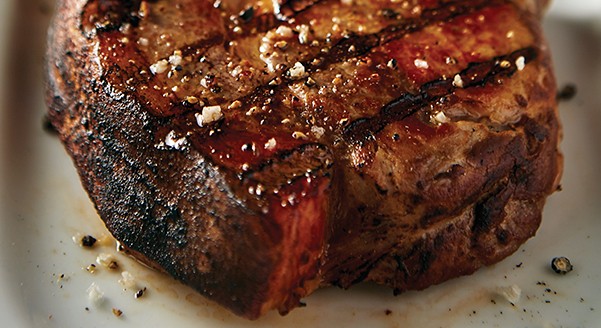 In-house butchering can lead to expansion

Executive Chef Craig Deihl just wanted better meat on the menu when he started breaking down pasture-raised whole hogs in 2007 at Cypress in Charleston, South Carolina.

Soon, he had a lot more pork on his hands than he anticipated, becoming the foundation for the Artisan Meat Share, a charcuterie community supported agriculture (CSA) that evolved into a brick and mortar butchery and restaurant.

“Buying the whole animal … raised food costs over the first year,” he says. “But once stuff was finishing out, we were selling everything off of the entire pig each month. And that’s when food costs started going down. You could have two or three different charcuterie plates like we do now on the menu at Cypress and Artisan Meat Share."