Tourists will drive out of their way to find it. Oenophiles ask for it with a pricey bottle of cabernet. Kids will dig into it, and their grandparents will steal bites, too. If you can make a palatable gluten-free version, you’ll find a loyal audience. And it’s among the highest profit margin dishes in the business. So, why isn’t pizza on every menu?

Still, it doesn’t take a master pizzaiolo to make an honest, profitable and completely satisfying pie.

"Pizza is really important to food cost...I don't think we want to sell all pizza but we feel it's a really profitable item."

Chefs across the country are making humble pizzas shine at trattorias, wine bars and farm-to-table bistros. Beneath the layers of mozzarella and hype, tossing a contemporary pizza is easy under the latest pizza regime.

When Andrew Wilson took over Carneros Bistro and Wine Bar in 2011, the Sonoma, Calif., kitchen wasn’t cooking for the locals, even though they made up 30 to 70 percent of the resort’s business, depending on the season.

“The former chef was not paying much attention to the wood-fired oven, which to me is very wine country,” Wilson says. “They had a couple of pizzas on the menu at the bar, but only because they were on the room service menu.”

Wilson spent a few nights listening to regulars at the bar and repeatedly heard the same request: off-menu pizzas. “We started keeping a journal of the custom pies that the pizza guys were baking for them, which were popular and tasted really good,” he says.

Relying on guest input and the creativity of his cooks, new options made their way onto the menu. “I made a point of letting the locals know how much they had to do with it,” Wilson says. “It got me in with the locals pretty quickly, which worked out well and we sell more pizza.”

Use pizza as a low-cost introduction.

Despite its local and seasonal focus, The Turtle Restaurant in Brownwood, Texas, isn’t in the proper location to introduce foreign dishes or upsell premium ingredients. “Our restaurant is in the middle of Texas. We have extraordinarily conservative eaters out here,” Chef Mary Stanley says.

Still, when The Turtle Restaurant introduced pizzas five years ago, the pies helped draw a cost-conscious clientele that wouldn’t have come through the doors otherwise. “When we opened, the pizzas were the best seller,” Stanley says. “People had been price resistant to our other food, which is more labor intensive.”

That is, until customers started ordering more off the menu, regarding pizza as an appetizer.

Not all kitchens are created equal. Brandon Wolff, chef at the recently opened Tre Soldi trattoria and pizzeria in Chicago, advises other chefs and owners to know their style of pizza and make sure their staff can execute a consistent pie.

“We tried a dough [we didn’t end up using] that was extremely delicate and difficult to produce consistently,” Wolff says. “We wanted to make sure that with delivery, the dough would hold up and still be delicious.”

Tre Soldi owner Jack Weiss knows that consistently good pizza is not only a crowd pleaser, but a moneymaker. “Pizza is really important to the food cost, just as pasta is,” Weiss says. “I’d rather sell pizza than sell steaks or fish. I don’t think we want to sell all pizza, but we feel that it’s really a profitable item.”

Pizza is a blank canvas with endless opportunities to push certain ingredients that customers might not otherwise order. Everything from local Dungeness crab to kale bolognese is fair game—and can come with a premium price tag.

At Carneros Bistro, Wilson has found that customers are willing to pay an extra dollar for seasonal heirloom tomatoes on a margherita pizza.

Despite the regular releases of over-the-top pies at national pizza chains, most independent restaurateurs exercise restraint with their pies. “Don’t overload it,” Wilson says. “If you’re doing a combo, stick to three ingredients max, so it all shines. If you use great stuff and tell a story about it on your menu, [customers] value that.”

Smaller pies also play into current diner preferences for sharing and sampling. “If people want a variety, they’ll buy more,” he says. “Why sell a large for $18 when you can sell three smalls for $13 each?”

Most people already love pizza, so chefs are wary of turning them off with complicated descriptions. Stanley knows that even when she’s using an Italian-style sausage or trying out a special sauce, it’s important to keep terminology approachable.

“You can sneak ingredients in, you just have to learn how to name it so it feels familiar,” Stanley says. “I never use any French words. They have to be pronounceable.”

That’s why regulars often refer to her prosciutto and rocket pie as “the salad pizza.” With no separate children’s menu, The Turtle Restaurant eases kids into the adult menu with simpler pies topped with gorgonzola and Parmesan.

While pizza’s cult following always has room for new converts and even some stuffed-crust-loving heretics, chefs who have perfected their pies share a similar mantra: keep the ingredients simple and fresh.

Kate Bernot, nightlife editor at RedEye Chicago, is always up for a late-night pizza.

Need toppings to turn heads? Check out these takes from the kingpins of pizza: 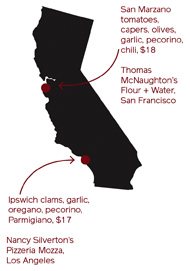 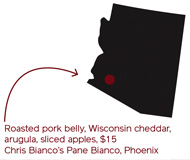