Strange as it might sound, Indian food in India is “blowing up right now.” That’s according to Anita Jaisinghani, chef-owner of Houston’s Indika and Pondicheri. In the old country, chefs are reclaiming regional recipes with seasonal ingredients and new techniques. Indians are falling in love with their food again. So why hasn’t the Indian food revolution emerged stateside yet?

“Indian food today is what Italian food was 30 years ago,” says culinary director Floyd Cardoz of Bombay Canteen in Mumbai and forthcoming Paowalla in New York City. “Most people thought Italian food was red sauce and pizza. Similarly people think that Indian food is only nan and chicken tikka masala.”

Inroads, however, are being made. By drawing upon the country’s vast library of spices, cooking techniques and regional cuisines, some U.S. chefs with strong ties to India are introducing diners to the possibilities of this deep and ancient cuisine.

In the search for authenticity, it might seem daunting to tackle such a massive cuisine. But don’t sweat it. “There is no wrong way to do anything,” says Jaisinghani. “Every family does their own version of each dish.”

The lack of formal structure gives her the freedom to combine Indian and southern cuisines at Pondicheri, like her chai spice-infused custard pie or lentil and rice dosa (crepe) filled with Punjabi baingan bharta (roasted eggplant puree) and paneer.

Speaking directly to her Houston diners, she puts a local riff on the popular street snack known as chaat. Texas shrimp is pickled in a mustard seed, fenugreek and fennel brine then tossed with avocado, pomegranate seeds, market greens, cilantro and crunchy chickpea noodles called sev. “Essentially it’s half salad, half chaat with a lot of foreign ingredients,” she says.

Chauhan’s hot chicken pakoras are an ode to the famous Nashville hot chicken served at legendary joints like Prince’s and Hattie B’s. Cubed chicken is marinated in buttermilk seasoned with garlic, ginger, salt, asafetida (indigenous Indian root), cayenne, black pepper, chili powder and paprika. The meat is then dredged in flour then dipped in a chickpea and wheat flour batter with red chili powder, more asafetida, garlic, ginger and soda water before it hits the deep fryer. At pickup it’s seasoned with a spice salt of jalapeno, cayenne, chipotle, dried mint and chaat masala. A hot sauce of habanero, yellow peppers, orange peel, champagne vinegar and honey accompanies the appetizer ($11).

"Indian food today is what Italian food was 30 years ago."

The restaurant’s saag paneer resembles a steakhouse-style creamed spinach. Housemade cheese retains its soft, lush texture by avoiding overstraining or cooking it too hard. At pick up, it’s added to lightly sauted spinach started with onions fried in ghee, bay leaf, tomato, ginger and garlic. Turmeric, chili powder, ghee, cream cheese and fenugreek leaf compound butter are also swirled in. Housemade nan accompanies the appetizer, making it easy to eat at the bar or share with the table ($12).

Certain regional Indian foods can reinterpret dishes from other cuisines. “What some chefs are doing in America is showcasing how the basic spice blends and masalas of Indian cooking work in just so many applications,” says Chef Akasha Richmond of Sambar in Culver City, California.

Pork vindaloo, a specialty of the Indian state of Goa, inspired her to take Italian porchetta to the Indian spice pantry. Richmond rubs a pork shoulder with chili, coriander, cumin, black cumin, black pepper, mustard, cinnamon, cardamom, garlic and curry leaves, rolls up the meat and lets it sit overnight. The pork is slow cooked, sliced and then crisped in the pizza oven. It’s served with mango chutney and a vinegar based vindaloo sauce ($15).

“You get all the flavor, but you get a completely different texture experience,” she says.

Chef K.N. Vinod of Indique in Washington D.C. looked to a dish favored in his home state of Kerala to create a new twist on Irish shepherd’s pie. He braises boneless lamb with fennel, shallots, garlic, ginger, cinnamon, cardamom, cloves, chili powder, coriander powder, turmeric powder and salt. Then he fries it in coconut oil with mustard seeds, curry leaves and garlic before topping it off with mashed potatoes seasoned with more mustard seeds, curry leaves, red chili and shallots. The dish is baked until browned.

“When people ask how do you define your cuisine, we say it is like a white woman wearing an Indian sari,” says Mehta. “We are so white with our focus, and we have enveloped it and adorned it with Indian flavors. To make it more mainstream you have to sell the idea through an identified product.”

Mike Sula is a James Beard award-winning writer and restaurant critic for the Chicago Reader. Follow him on Twitter @MikeSula. 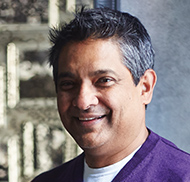 Floyd Cardoz has pioneered Indian food in the United States since opening New York’s Tabla in 1998 (it closed 12 years later). Author of several cookbooks, including Floyd Cardoz: Flavorwalla due out later this spring, Cardoz knows how to make Indian food resonate with diners. The chef-partner at Mumbai’s Bombay Canteen who has a New York restaurant in development, shares his insight.

:: Indian food is much more than you think.

“If you ask 90 percent of the people who eat Indian food what Indian food is, they’ll say chicken tikka masala, which is not even an Indian dish."

:: Indian food should be user-friendly.

“One of the most important things we have to do as Indian chefs is make our food user-friendly. It’s all about balance: spicy, sour, sweet, bitter and salty in a dish. You don’t see that very often.”

:: Indian food is regional, but you’d never know it.

“Most restaurants make this murky mix of ingredients that most people don’t recognize. It’s too spicy. It’s too greasy, and most people either love it or hate it. Unfortunately more people hate it than love it, but that whole trend is changing. People are realizing more can be done.”