The wing shortage that’s hampering availability and driving up costs couldn’t happen at a worse time as the most popular sellers – sports bars, casual concepts with giant televisions – enter an in-person fall game season for the first time since 2019.

To keep profitability up and diners happy, concepts are recreating the experience: nailing the deep-fried, crispy, fatty skin-to-meat-to-sauce ratio that makes eating wings with beer and cocktails so incredibly satisfying. In other cases, it’s simply relying on the craveability of fried food and matching wing replacement with explosive flavor or renditions that scrap chicken altogether. Mauro Cruz, who opened brick-and-mortar restaurant Chef Smokey’s in the Atlanta area earlier this year after a successful 2020 pandemic pop-up serving birria tacos, is up front with guests. He suggests alternatives.

Thanks to the pop-up, Cruz has become accustomed to communicating with his 21,000 followers on Instagram, which allows him to reach his audience fast and to set expectations. In April, a post read: “Due to the chicken wing shortage, we have started selling boneless wings! Come by and try out all of our favorite flavors, and watch the new soccer channels we added!” 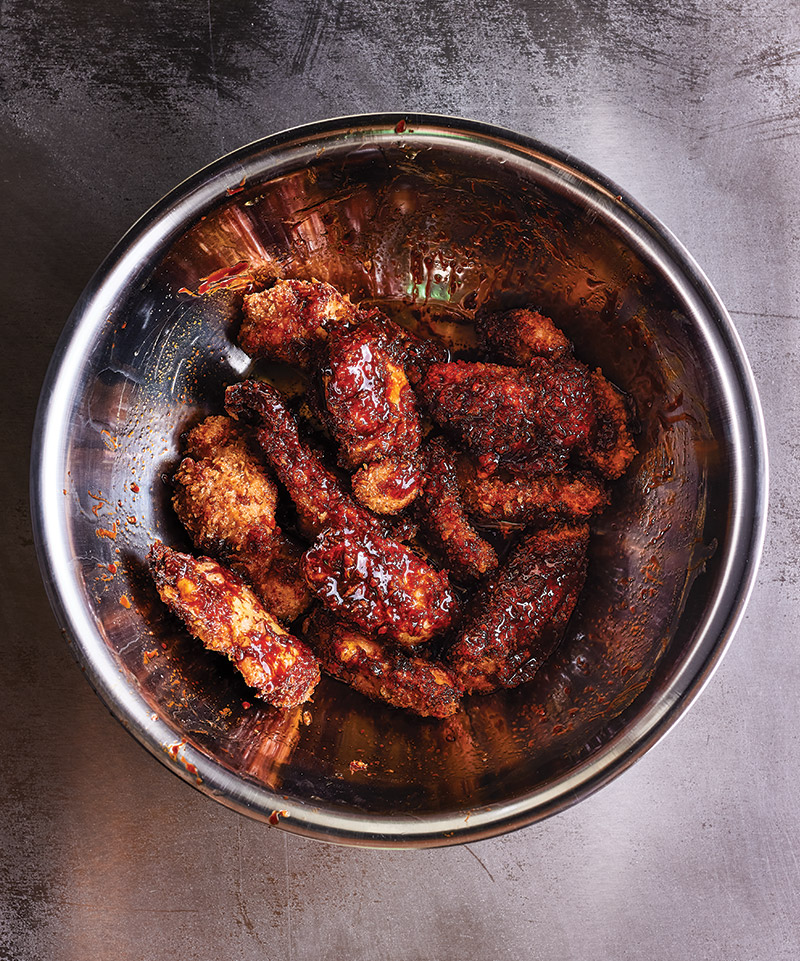 Sauces for wings that he now uses for the boneless ones aren’t uber creative – barbecue, mango habanero and teriyaki – but they are solid. Feedback from customers are thumbs up, telling him he’s on track.

Launching a replacement that satisfies wing eaters and the possibility of becoming a sought-after item is the goal of Thighstop, an online-only effort by the Wingstop chain, making it the largest ghost kitchen in the country. Over the summer, Thighstop recently began selling crispy bone-in, skin-on chicken thighs and boneless thighs (think nuggets) in the style of its wings, replete with the option of its 11 sauces for the same price through a dedicated site and third-party Doordash. Wingstop’s 1,440-plus locations worldwide are fulfilling the orders.

“The demand for thighs and dark meat is not as high as white meat and wings, but we believe that younger generations are more accustomed to and more welcoming of the meat’s juicer and more flavorful attributes,” says Wingstop spokesperson Megan Sprague. “Plus, our sauces that have helped build our brand have a very strong and loyal following.”

In other words, if a protein fried in fat is righteously seasoned and/or accompanied by a bold sauce that contrasts and complements, a winner is highly likely. Take a look at the following concepts known for wings, some of which have already gone boneless.

LAUNCHING A REPLACEMENT THAT SATISFIES WING EATERS AND THE POSSIBILITY OF BECOMING A SOUGHT-AFTER ITEM IS THE GOAL.

If wings become unavailable or price prohibitive, the menu structure gives customers plenty of options at this five-unit fast casual by offering “brined, battered, twice-fried chicken plus sauce” for thighs, wings and chicken strips. Each choice can be customized with five possible “dry” wing seasonings, such as a smoky barbecue rub, coconut brown butter powder with toasted coconut, and four-alarm Carolina reaper chili powder and spice mix that’s accompanied by a carton of milk. Or customers can opt for “wet” wings tossed with the choice of four sauces, including fish sauce caramel, spiced honey garlic or jalapeño cheddar. An additional seven sauces, from sesame miso vinaigrette and ginger aioli to umami barbecue sauce and kimchi cheese sauce, can be purchased for 65 cents each. 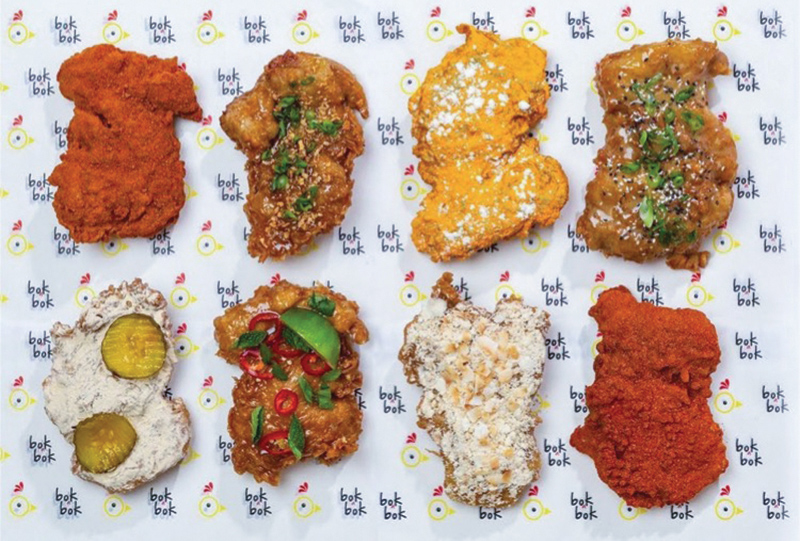 This $15 signature at chef Douglas Kim’s Michelin-star West Village Korean concept typically features five marinated crispy-fried wings tossed in umami salt and served with a deeply satisfying gochujang sauce and seasonal crudites. But as a result of the shortage, a two-piece fried chicken appetizer (thigh and leg) is standing in at $29. It’s dusted with onion powder and accompanied by a yogurt dip and caviar. Diners are ordering the parts and if the replacement continues to sell, Jeju may have a new signature on its hands. And the wings? No decision as of press time. 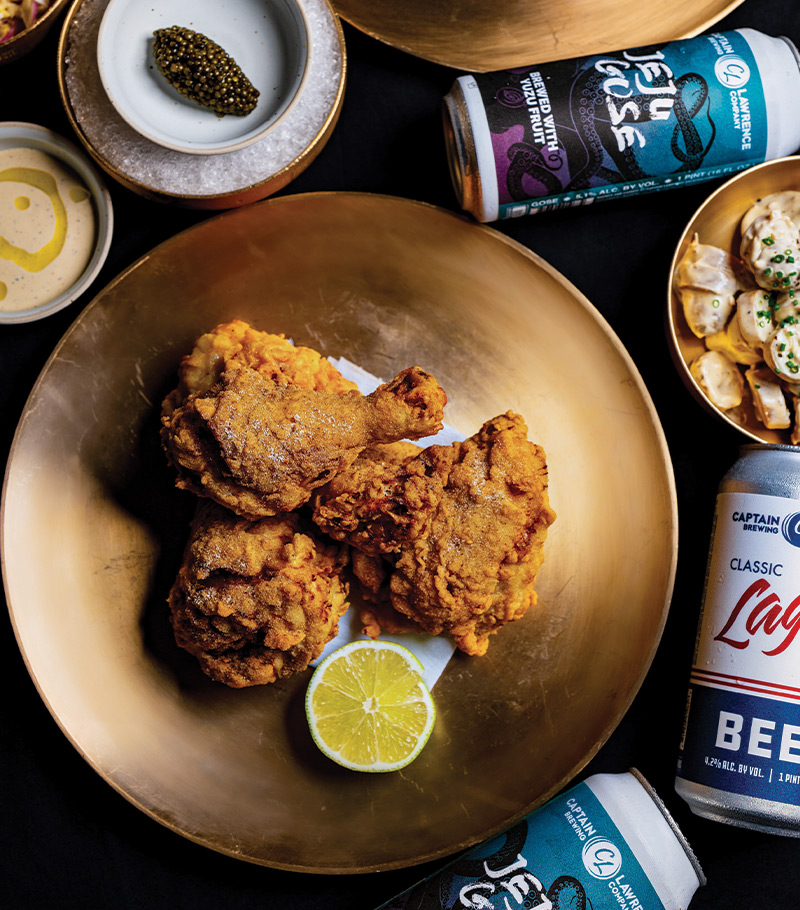 The Monday night five whole wings for $5 promotion might need to be curtailed to meet any supply chain constraints, but the restaurant is in good shape to pivot. Owners Brent Pease and Geoff Mathias offer vegan chicken bites and boneless wings, which can easily step up and can be accompanied by any of the 16 prep-method/wing sauces, such as cereal crust, Mountain Dew margarita or Nashville hot. If the price is right, they could also try smaller drumsticks as an alternative.

The restaurant promotes its 50 beers on tap to pair with food built on the belief that deliciousness goes hand-in-hand with suds. While they have a loyal wing following, a menu with a wide array of on-trend favorites, from bowls and pizzas to plant-based options and empanadas, will help allay any no-wing disappointment. It also challenges staff to hone their selling skills and allows for any undiscovered menu items to surface as favorites. 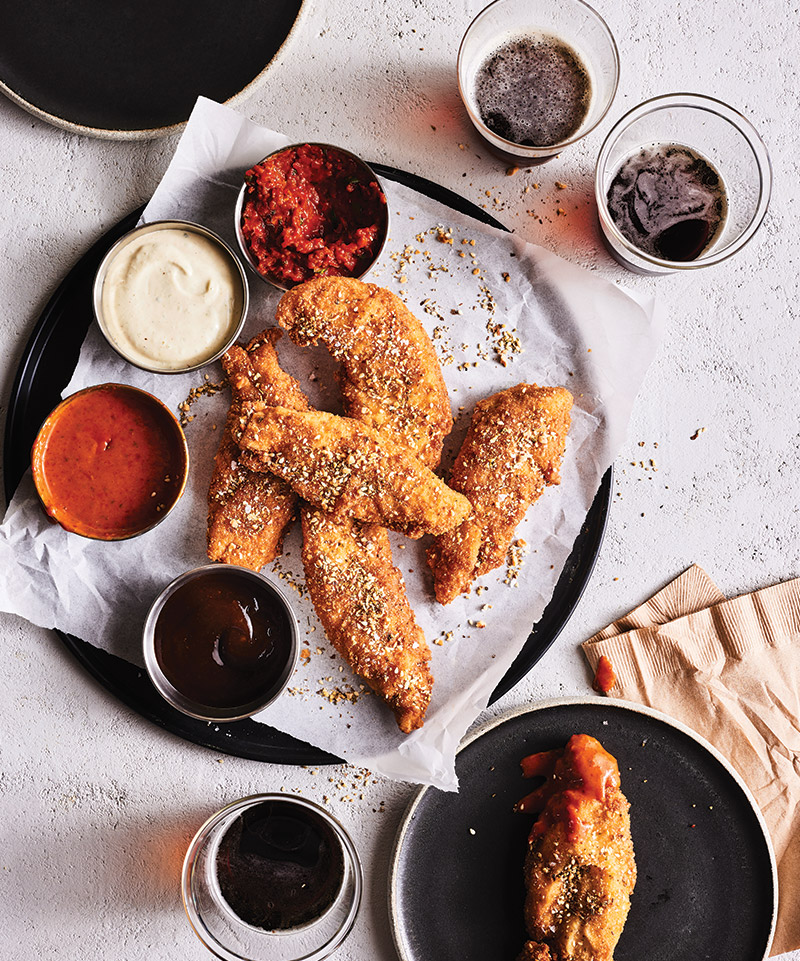 Owner Teddy Bricker and chef Dillon Misonznick also are aware of the undeniable fried chicken and beer attraction, setting up shop outside of Zilker Brewing earlier this year to offer chicken, wings and sides. They’re available with seven sauces, from Korean buffalo to citrus miso, but they can also be paired with boneless wings and cauliflower bites.

Misonznick is well aware that fried anything isn’t always the answer, but they can stand in when wings aren’t available, and the cauliflower appeals to people who don’t eat meat. 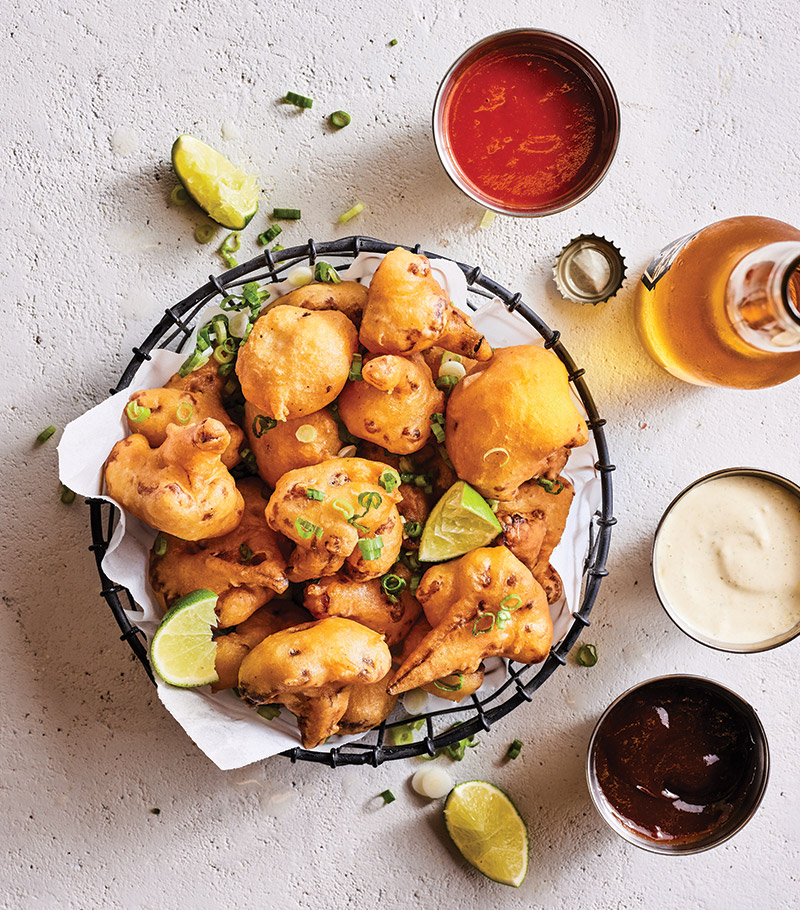 Chicken wing attributes, from its satisfying meat to fatty, crispy-skin ratio to its portability and myriad sauces and seasonings that cross culinary borders, kept the appetizer in higher than usual demand during the pandemic.

But then came labor and supply chain issues, followed by a storm earlier this year in Texas that devastated the chicken population. Prices for all chicken parts have been impacted but nothing like the shortages in the wing category. As simple as it sounds, remind your customers that each bird only has two wings, a fact that always makes them laugh, operators say.

While that explanation may fail to alleviate dismay among all guests, perhaps knowing when their favorite food will be in ample supply again might. As supply chain issues are ironed out, chicken wing availability will remain constrained until the end of the year, according to the National Chicken Council, but that relief will come eventually.