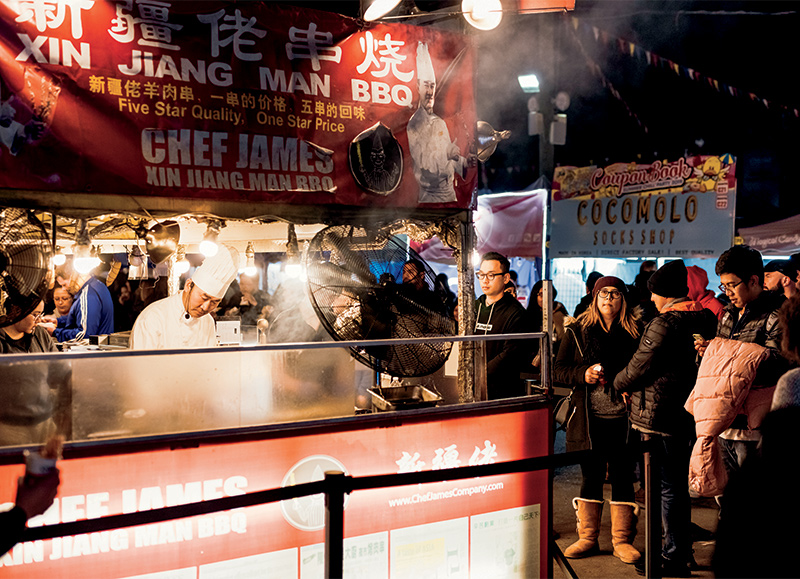 A find and dine expedition of authentic food doesn’t always lead to the country of origin. For Chinese, it’s Richmond, British Columbia.

Largely ignored by food media and undiscovered in the U.S., this nondescript Vancouver suburb is home to more than 200 Asian restaurants concentrated in a three-mile radius. Some are one-dish concepts, such as tofu or fermented soup, while others specialize in a region of China or an ingredient like lamb. Food courts are many, but the city is best known for the Night Market, a weekend seasonal showcase of food stalls that could easily be mistaken for Singapore’s hawker stalls or Hong Kong’s Temple Street food stands.

Situated on Canada’s Pacific coast, Richmond’s unique demographic of majority Chinese and remarkably large numbers of Filipinos and Japanese (about 75% of the 214,000 residents) has evolved into a level of authentic cuisine matched only by the Far East. Hong Kong immigrants and burgeoning wealth from China has fueled much of the suburb’s steady population growth over the last decade, evident by a preponderance of luxury cars that fill lots and jockey for street parking. 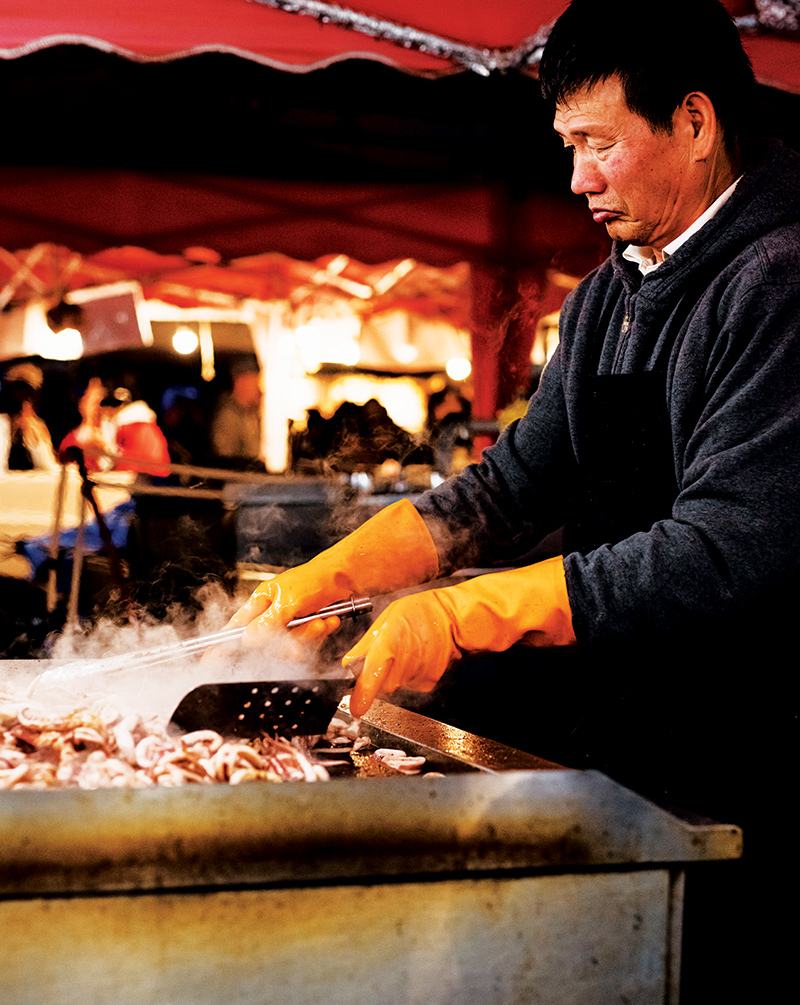 Still, expect no-frills service and the typical Chinese eat-and-leave dining style – but also classic Canadian friendliness ­– from mostly mom-and-pop operators open to answering cooking questions. Speaking Mandarin or even Cantonese makes it easier and yields more details. Don’t be surprised if you are the only non-Asian, and don’t be thrown off by the name of restaurants or the dishes. Blame it on “lost in translation.”

Because authentically prepared Chinese barbecue, from spare ribs to pork tenderloin, and classic Peking-style duck can be found in the U.S., HK BBQ Master is not included on this list, but it certainly lives up to its name. Considering that a local blogger dedicated every day for a year to eating Asian in a different Richmond restaurant, the following dishes are only a glimpse, but at least are representative of the cuisine’s depth. Hopefully, they will fill the hunger for inspiration, ideas and riffing.

Tofu as a Snack or Dessert

❯❯ Soy pudding with grass jelly and maple syrup: silken, amazingly fresh and clean – served either hot or cold. The grass jelly that tops this pudding is made from the Platostoma palustre plant, a relative of mint. It has a slight earthiness and faint bitterness, making it ideal with the ginger syrup served in a condiment. Yeast-risen fried dough sliced into bite-sized pieces is meant for dipping. Other toppings include basil seeds and red beans. The shop sells only tofu products, from fresh soy milk to warm and cold tofu puddings. Six two-tops framing each side of the walls is all that’s needed invite a constant flow of traffic. 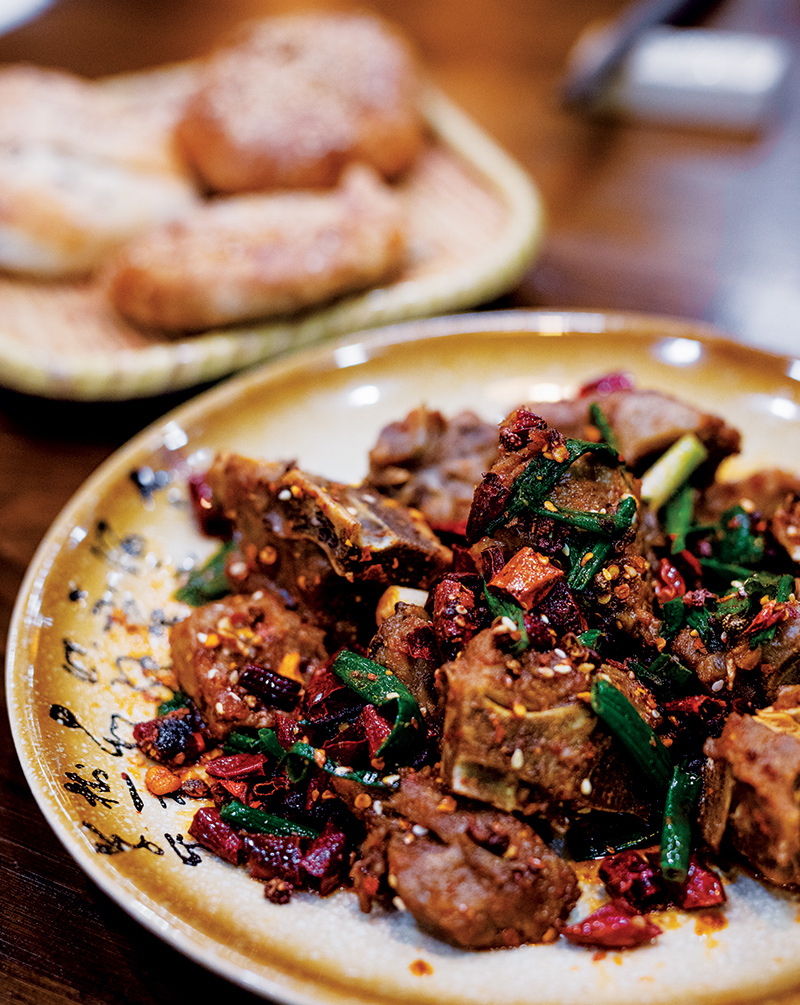 ❯❯ Bone-in lamb stir-fry: dominated by garlic, chili and a balance of five-spice powder. The meat is braised (the liquid saved for soup), air-dried overnight and then stir-fried with plenty of red bird chiles and the green part of scallions.

Buns, referred to as flatbread: flaky and dense (not a yeast dough), filled with an ingredient, such as red bean paste or green onion and ham. Ingredients such as sesame paste or five-spice powder are blended into the dough. Both kinds are brushed with egg, generously sprinkled with sesame seeds and baked. 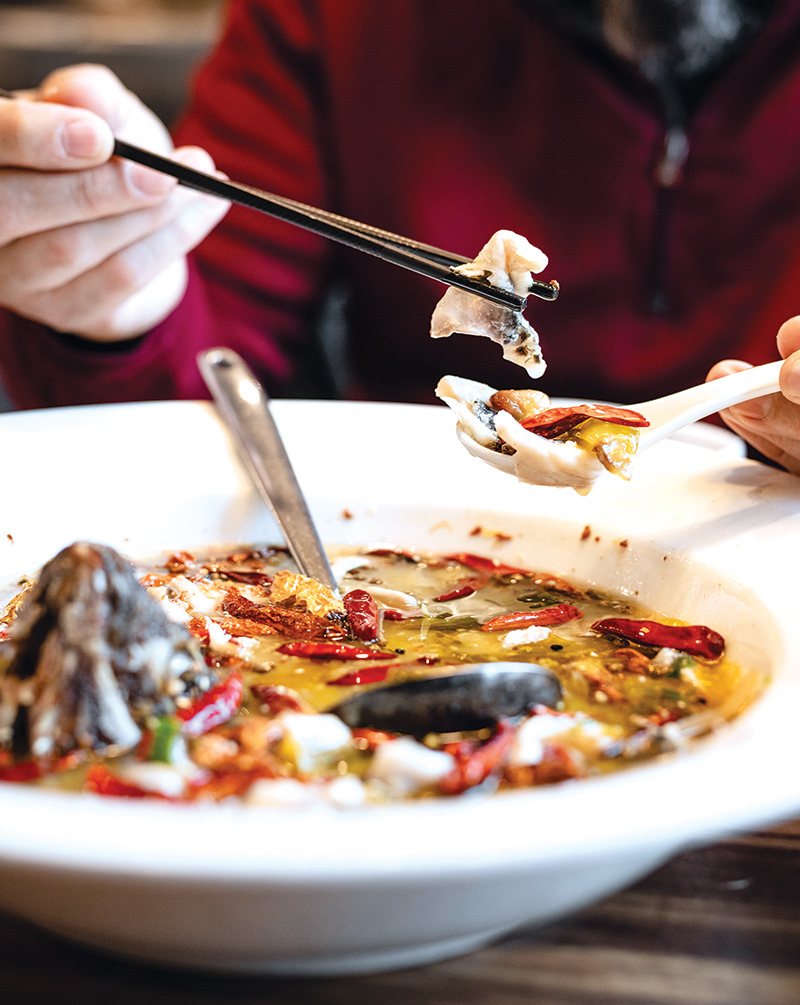 ❯❯ Hot and Sour Fish Soup: a one-dish concept built around a whole fish, fermented cabbage and chili-spiked broth. Richmond’s proximity to the Pacific means plentiful seafood options, including seabass and ling cod. Served family-style, suan cai yu is seasoned with coriander and teaming with chilies, roasted garlic, onions, and green and black Sichuan peppercorns. The dish is rich and balanced with layers of heat and flavor – and could easily be served as an individual main course. More than a dozen three-foot-tall urns filled with fermenting cabbage share the dining room. 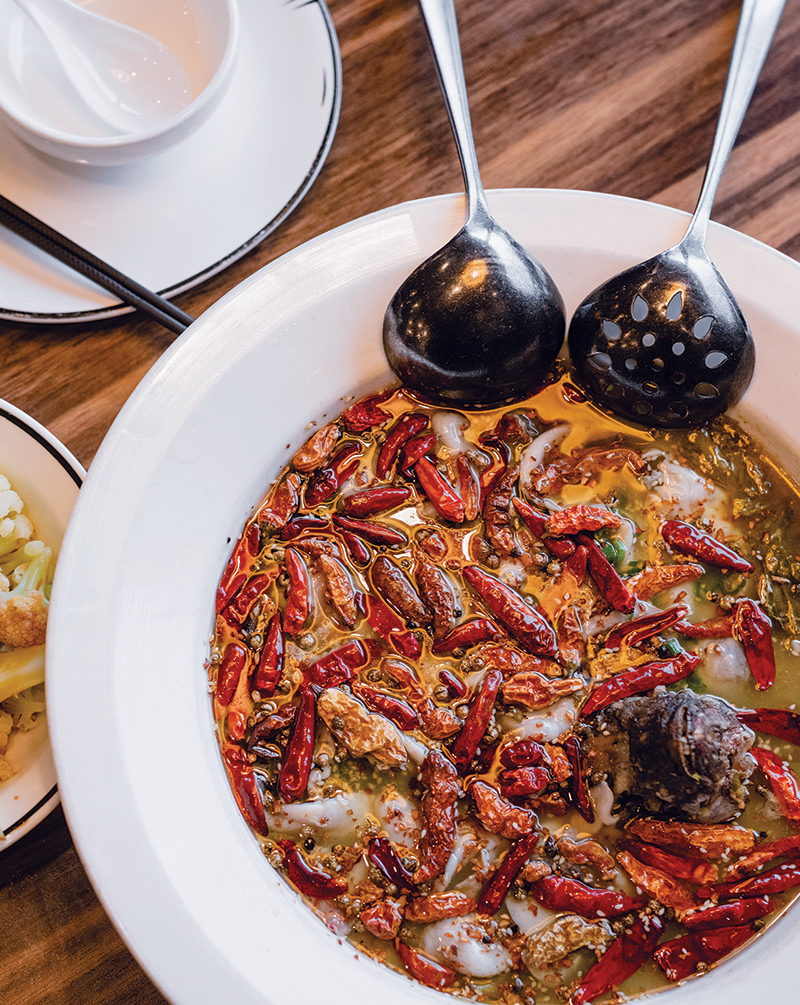 ❯❯ Peppered pork stomach soup with sour vegetables: soaked and expertly cleaned, it’s sliced into strips and braised with onions and Sichuan peppercorns. The sourness of this rich and flavorful house specialty comes from salted and fermented Asian greens and cabbages. While fermented foods only recently have become commonplace in American restaurants, preservation is a hallmark of authentic Chinese cooking.

❯❯ Marinated tofu and egg: an example of the true sublime and simple Cantonese cooking that’s been bastardized in the U.S. Soft housemade tofu and whole peeled eggs are poached in soy sauce and roasted in sesame oil. The eggs, cooked until jam-y inside, are halved and framed by sliced tofu.

❯❯ Lamb with a housemade rice noodle soup: thickened with sesame and peanut paste and topped with bean sprouts, cilantro and a spicy house sauce made from chili and tomato, makes this hearty and filling. Bone broth is evident.

❯❯ Beef bun: described as a Chinese “hamburger” but probably not the most apropos comparison. The bun is made from a dough of flour, water and sesame, resulting in a dense, not yeasty, bread indicative of the north. Inside, it’s filled with sliced beef cooked with abundant amounts of ginger, cinnamon, clove and hints of cumin that are paired with the same chili-tomato sauce as the noodle dish. 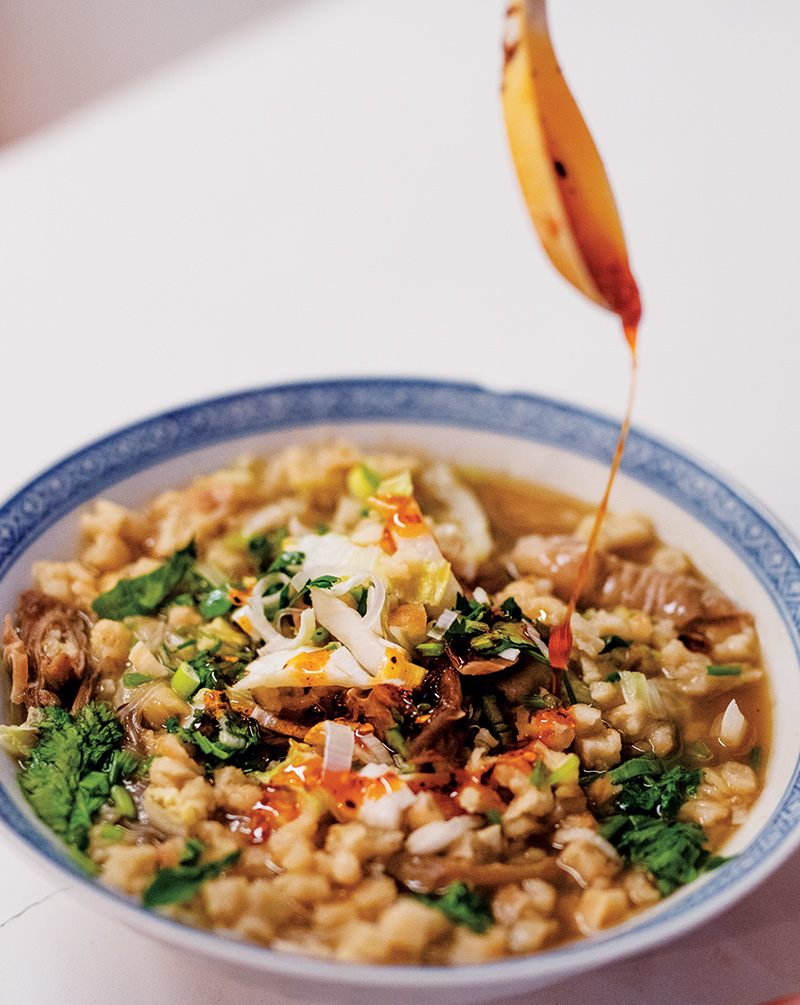 ❯❯ Popcorn chicken with mountain yam: thigh meat tossed in corn starch and plum powder and deep-fried. The protein sits atop peeled yam that’s sprinkled with plum powder and roasted. The result is an unfamiliar but wonderful sweet aroma.

❯❯ Crispy fried fish skin with egg yolk: a dish that checks off of-the-moment needs. It’s shareable, works as a bar snack and appetizer, and fits the nose-to-tail ethos. Moreover, it’s crunchy, salty and full of umami. Northern Chinese cooks are masterful at deep-frying and then wok-frying an ingredient – and this dish, though somewhat labor-intensive, is no different. Fish skin is cleaned, laid out flat and air dried in the cooler for a few days, which helps keep it flat while frying. At pickup, it’s wok-fried and tossed with salted egg yolk, ginger, garlic and soy. 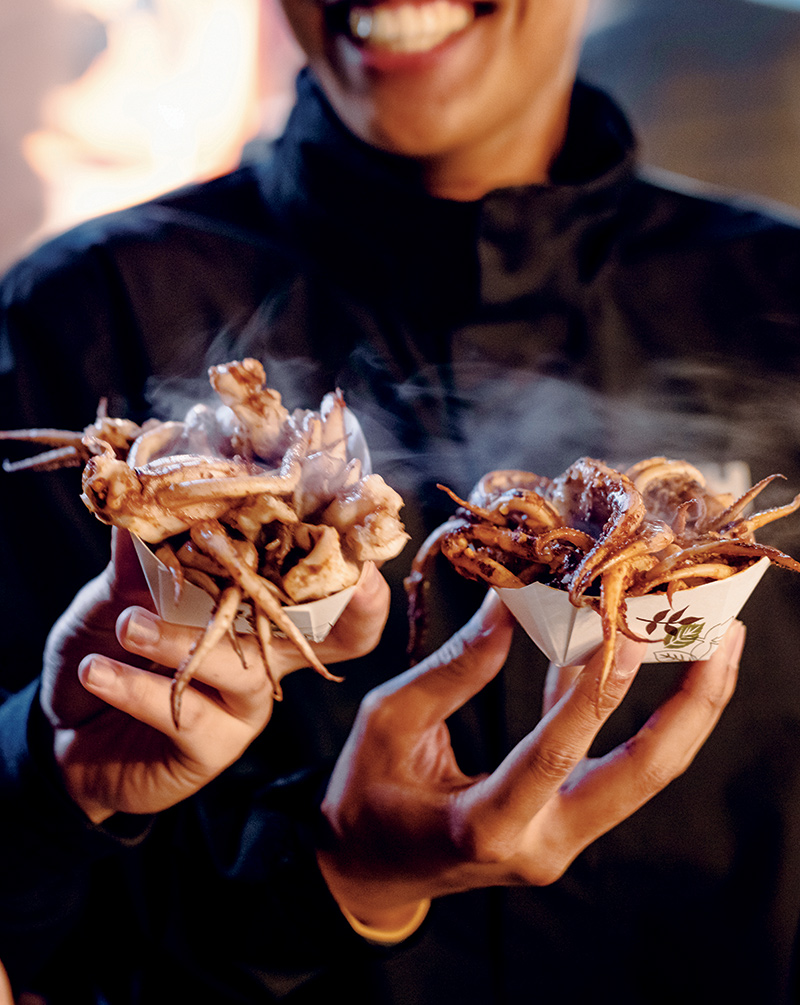 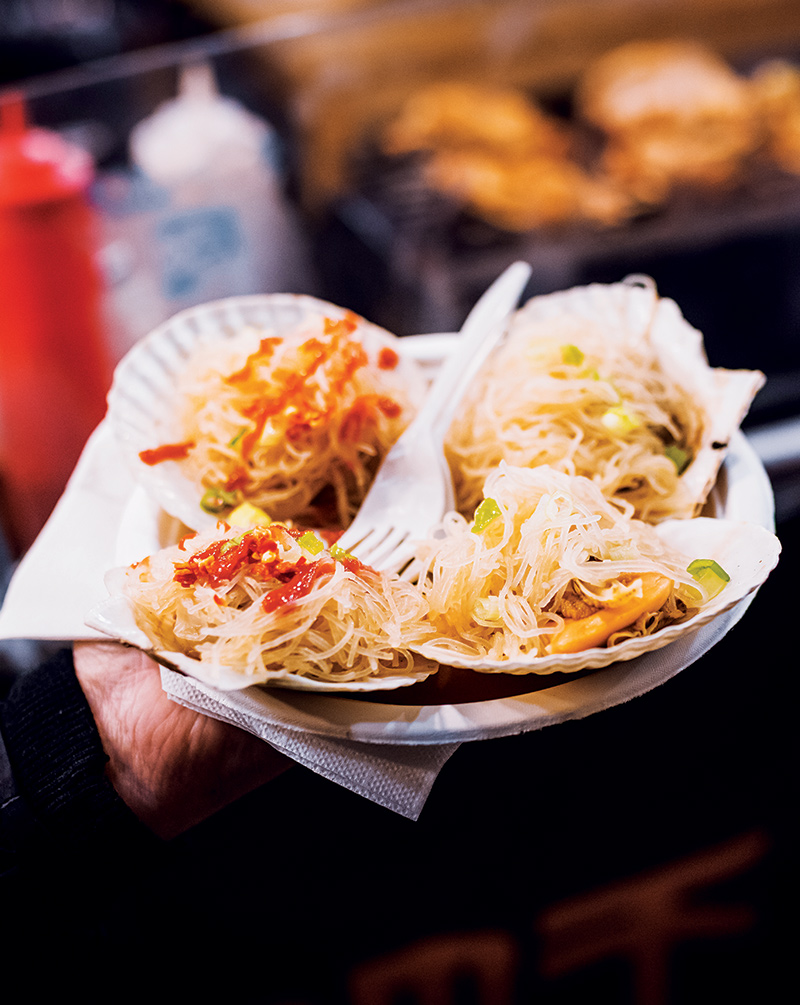 ❯❯ Pulled noodles and pork burger: Not to be confused with U.S. locations of a similar name, this Xi’An Cuisine is a cult favorite on the second level of the Richmond Public Market food. While Xi’an is centrally located in China, the classics have become mainstream. Noodles, which symbolize long life, would never be cut short, but it’s clearly a way to use leftovers. They include chopped thick and dense noodles tossed with sliced beef and equal amounts of napa cabbage, its wavy leaves capturing and efficiently transporting a garlicky soy and ginger sauce along with pigeon peas. There’s also a pork intestine soup with pieces of noodles that resemble spaetzle and broken vermicelli, paired with a scallion. The so-called “pork burger,” seasoned with five-spice powder and ginger, is like a pulled pork sandwich. 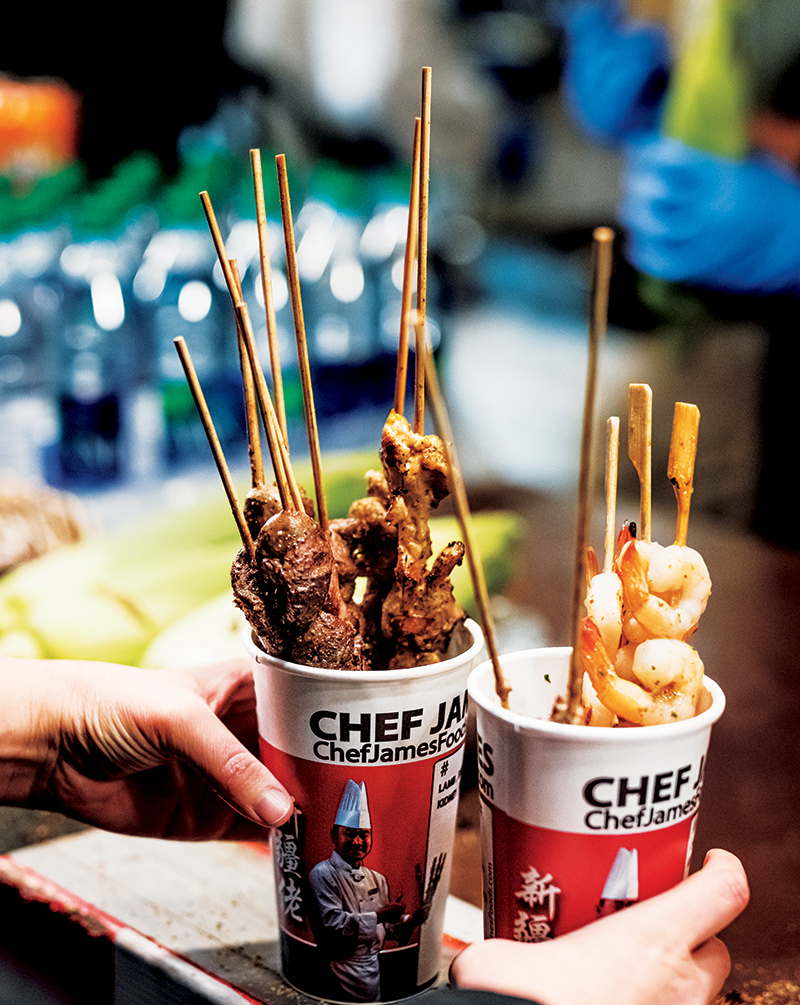 ❯❯ Duality cuisine: With Guangdong (Cantonese cuisine that defined Chinese food in America) to the east, Sichuan to the north and Vietnam to the west, food from the cities within Guanxi take cues from its neighbors ­– namely, varying amounts of fermentation and heat. This particularly applies to noodles, including a Guilin rice noodle dish of marinated pork, beef and deep fried sausage, sour beans and fried peanuts in a deeply flavorful broth. Nanning noodles brings together a fermented broth with romaine, ginger garlic and black beans. The unlikeliest of finds: “exploding pulp chicken” – panko-crusted chicken breast stuffed with a creamy yellow cheese. The owner says it’s a traditional dish of the region.

The Richmond Night Market: Chew and Do

At first glance, a night market of 100-plus food stalls and more than 200 retail vendors hawking Asian trinkets, toys and souvenirs seems like dream food research until realizing that it’s less reconnaissance and more of a culturally enlightening night out.

From mid-May through mid-October, the Richmond Night Market is host to an array of food, reflecting the overall Asian community rather than predominantly Chinese restaurants. It’s worth experiencing, but don’t expect mind-blowingly complex traditional foods, which wouldn’t be easy to enjoy among the tightly packed throngs of people who pack this weekend affair, which runs Friday through Sunday from 7 p.m. to midnight.

Search out live-fire vendors and fresh seafood offerings, such as fried or grilled squid and baked local oysters, which are buried among a bevy of county fair-worthy options like deep-fried cheese, mac and cheese, katsu sandwiches and tornado potatoes.

❯❯ PRO TIP: Avoid the hassle of parking and take the train, which is a short walk to the market. Even if you only visit once, it’s worth buying a fast pass pack of tickets to avoid the long wait times, which can extend to as much as an hour to enter the market located at 8700 McKim Way.

Where is Richmond, British Columbia?