Plant-based foods and protein alternatives have had an immense impact on menus in the last decade. In 2014, this publication reported on grains and nutrient-charged produce becoming culinary superstars, while chefs discussed the growing demand for meatless dishes.

Eight years later, vegetable and grain-focused appetizers and entreés are the norm, and quinoa and kale are pervasive. In 2016, consumers cringed at a “burger that bleeds” when the Impossible Burger debuted, but now their biggest fans are meat-eaters.

Pescatarians, flexitarians, omnivores, ovo-tarians and lacto-ovo-tarians became part of the lexicon. Cobbling together a meal with side dishes became a thing of the past. Today, 52% of consumers are eating more plant-based foods, according to consumer data company NielsenIQ. When 57% of consumers believe their food choices impact the environment and more than half consider climate change to be important – says research firm Datassential – it’s likely that plant-forward dishes and meat analogues (euphemism for fake meat) will continue to grow.

For cell-grown chicken, cattle and shrimp as well as plant-based meat alternatives, taste and price will drive acceptance and proliferation. Protein grown in a lab isn’t available in the U.S. yet, and so far, only one in three consumers think meat analogues are as healthy as traditional plant-based foods, according to Datassential.

But this much we know is true: Consumers are more educated about food than ever, and the youngest diners (the future) are the most receptive to foods that benefit the planet.

When meatless diners no longer need to hunt and peck the side dish offerings to cobble together a meal, the bar has been raised – perhaps permanently. With higher expectations, pizza is one universally beloved food that can do better than marinara as a base and saying goodbye forever to meat and cheese. 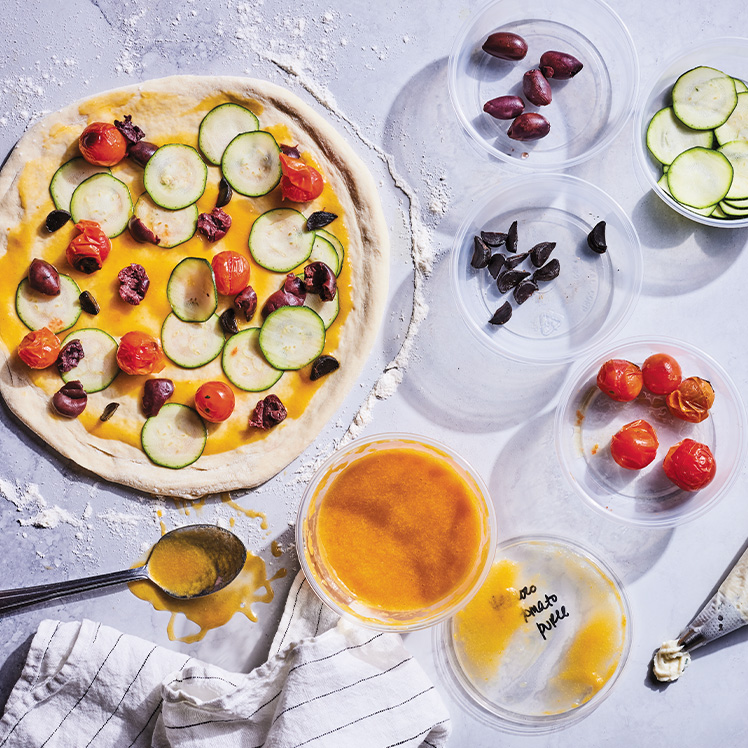 Some pizzaiolos agree. They’re experimenting with a slew of options and working with new plant-based meat and cheese alternatives.

For example, chefs across the country are loving Miyoko’s liquid vegan pizza mozzarella, a plant-based cheese made from cultured cashew milk. They’ve fallen hard for the way it easily melts and bubbles. “It’s easily applied to the pizza, fires well and browns,” says chef Rob Larman of Il Fuoco in Sonoma, California.

At Margo’s Santa Monica, chef Blake Thorson reaches for Beehive’s seitan pepperoni. “Beehive has the closest texture and taste to real pepperoni,” he says. “It crisps up beautifully if you add a little olive oil on top before cooking.” 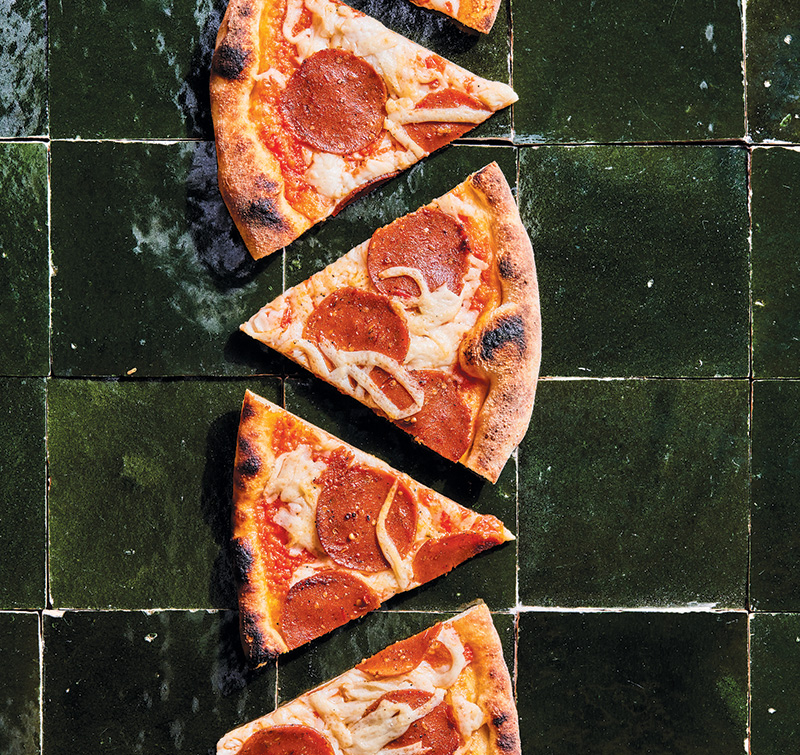 Gen-Z diners are the most likely to opt for plant-based proteins and dairy alternatives no matter the type of food, according to research firm Datassential. But one truism remains for all diners: Just about no one will sacrifice taste.

A vegan pasta dish isn’t any huge feat but a silky, creamy one without the help of butter, eggs or heavy cream is a different animal. No problem, though, if you’re Matthew Kenney, who started building an empire of plant-based food long before it was a thing.

During the pandemic, he opened two locations of Sestina, an Italian vegan pasta bar concept, one in Culver City, California, and one in New York City. Last year, the third location opened in Los Angeles, and more are scheduled to open in the future.

Kenney’s team leans on nut milks and nut-based cheeses for the housemade pastas. Nuts can be ground, giving sauces heft, body and protein in addition to the creaminess that comes naturally from pasta water.

These dishes include truffle tagliatelle, elbows in a vodka sauce with tomatoes, basil and plant-based Parmesan, and English pea ravioli in Alfredo sauce and herb oil.

In Portland, Oregon, recently opened Lilla, an Italian vegan restaurant, makes in-house Parmesan as an ingredient for its smooth pasta sauces that include classic carbonara and alfredo.

At Crossroads Kitchen in Los Angeles, fettuccine carbonara starts with sautéing garlic in olive oil followed by housemade mushroom bacon, white wine, vegetable stock and plant-based Parmesan. It’s topped with what looks like an egg yolk, but it’s made from bearnaise congealed in olive oil that oozes once it’s broken.

A pork-free, plant-based bacon that looks, tastes and snaps like the real thing? Yes, says My Forest Foods, which is amping up production and distribution of the imitation bacon made from mycelium, the root of mushrooms. It contains just mycelium, coconut oil, salt, sugar, “natural flavors” and beet juice for color forged into a block that’s sliced like bacon.

Kids at a Singapore restaurant chow down on the first-ever nuggets made from cultured meat – a protein grown from chicken cells in a lab. Nearly two years later, the FDA and the USDA are still sorting rules for lab-grown products, though U.S.-based Eat Just which makes Good Meat cultured chicken says approval is expected this year.

LAST SEEN: Once approved, you might see lab chicken at a José Andrés restaurant; he joined the board of directors last year.

The Nail on Iceberg’s Coffin

Nutrient-dense leafy salad greens developed by a gene editing technology known as CRISPR are expected to be available next year.

LAST SEEN: Pairwise removed the sharpness from mustard greens to make them more neutral. Expect seedless blackberries, black raspberries and pitless cherries via the same technology from the California-based company.

A plant-based filet mignon is slated to hit the market next year. Made with the same soy protein as plant-based burgers, this cut from Juicy Marbles resembles the real deal with what looks like muscle fibers and strands of fat. A plus: If your line cook kills it by mistake, the faux filet will still have the texture of medium-rare.