This passion for the grill didn’t always transfer to professional kitchens, where grills competed for attention with fryers, broilers, ovens and flat top griddles. In many cases, grill use was perfunctory, to create burn marks on a piece of meat or fish. “Grill marks signified that it was cooked on a grill and it was fancy,” says Edward Lee, chef-owner of 610 Magnolia and MilkWood in Louisville, Ky. “And then it would be cooked in the oven anyway.”

"People think it’s just grilling. It’s basic. But there is a lot of attention to detail prior to putting something on the grill and while it’s on the grill."

No matter the inspiration, the call of the grill is universal, perhaps even primal. “There is this thing about grilling that you can’t get with any other technique, and it’s this smoke flavor,” Lee says. “There is physiologically something in our DNA that is programmed to be attracted to cooking outdoors.”

Here are some global grilling styles that are catching fire and a few hints on how to adapt them to a kitchen:

A Japanese grill used for searing small pieces of meat, fish and vegetables rapidly with the help of white-hot Japanese charcoal.

Japanese chefs pore over every detail of food preparation, and grilling is no exception. Channeling this perfectionist ethos, Chef-owner Gene Kato mans two robata grills at his restaurant, Sumi Robata Bar in Chicago. One is for items he brushes with tare (a thin soy glaze), while the other is for food he seasons with Japanese sea salt, black pepper or sansho (a citrusy Japanese pepper).

The key to this grilling method is the charcoal. Kato uses Japanese white oak for its intense heat, which allows him to sear meat with a high fat content while avoiding flare-ups. Also, its versatility gives him the ability to grill tender parts of tongue meat like steak and tend to more delicate stalks of romaine.

“Sashimi and sushi are very subtle,” Kato says. “Americans are used to stronger, bolder flavors, and robata has a more robust flavor.”

Executive Chef-partner Timon Balloo decided a smokier flavor better suited his Asian- and Latin-inspired menu at Sugarcane in Miami. On one end of his six-foot robata grill, he burns hickory to add smoky layers to dishes such as galbi (thinly cut Korean marinated short ribs) and skewered octopus tentacles brushed with a marinade of soy sauce and aji panca (a dark red Peruvian chile).

“During the winter months, we go for a more robust flavor profile,” Balloo says. “Spring and summer, we lighten it up with neutral woods.”

Rice bowls are the calling card at Bibigo, a 23-unit, fast-casual chain based in Seoul, Korea, with three restaurants in Los Angeles. The most popular toppings, like bulgogi, come off a charcoal grill.

The set-up works well in a counter-service environment. Proteins—beef, pork, poultry, fish and tofu—are marinated, often in a blend of soy sauce, sugar, sesame oil, minced garlic, black pepper and ginger. The protein is quickly cooked to order over high heat before topping the rice.

Along with charcoal and marinade, Korean barbecue success hinges upon butchery, Lee says. “A Korean chef must know how to cut against the grain of meat to get that perfect cross-section of meat.” Too thin and it will fall apart on the grill; too thick and it will be chewy.

Lee draws inspiration from Korean barbecue for the pork belly that garnishes scallops served at MilkWood. Instead of braising the belly until tender, Lee thinly slices raw belly against the grain, then grills it over high heat with a glaze of strawberries, tamarind, honey, sesame oil and brown sugar. “You get the flavor of the pork belly melting onto the scallops,” he says.

Food skewered on a spit rotates around a heat source for indirect cooking.

Spit-roasting is one of the most universal cooking methods, but it’s especially popular in Mediterranean and Latin American countries. Chef-owner Rick Hackett installed a vertical rotisserie at Bocanova, his pan-American restaurant in Oakland, Calif. “It gives you the opportunity to do larger things, like big cuts of meat or fish,” he says.

Hackett’s rotisserie rotates around a gas flame, but radiant heat from the sides cooks the proteins. The rotisserie is used daily to cook meats such as achiote (annatto seed)-rubbed chicken and pork ribs brushed with a guava-chile barbecue glaze. For specials, Hackett prepares whole legs of lamb in the rotisserie, coating the meat with achiote, garlic, breadcrumbs and parsley and roasting for 45 minutes. “The rotisserie gives it a nice exterior caramelization,” Hackett says.

Chef-partner Jim Botsacos wishes he had a rotisserie at Molyvos, a Greek restaurant in New York City. “In the Mediterranean, they spit roast their lamb all the time,” he says. “It gives the lamb its smoky essence.”

To mimic the effects of a smoky rotisserie, he uses the restaurant’s five-foot grill. After seasoning lamb with a classic Greek marinade of lemon zest, olive oil, garlic and oregano, he sears the meat over high heat, simulating open fire by throwing wood chips on the grill. He then cooks the lamb in the oven on a bed of onions and lemon until tender. To finish, he serves it with an Ionian garlic sauce. “It’s working with limitations,” he says.

A barbecue grate placed over hot coals used throughout Latin America to grill meat, from Peruvian anticuchos to Argentinean churrascos.

South America may have more terms for barbecuing than any other continent, and its styles vary from indirect-heat rotisseries to direct-heat planchas (cast-iron griddles). All of these implements may be used at an Argentinean asado (a barbecue party). But at its most basic, Latin American grilling revolves around a parrilla (a wood- or charcoal-fueled grill).

Before grilling comes the marinade or rub, says Anthony Lamas of Seviche in Louisville, Ky. For a Latin-inspired take on shrimp cocktail, he seasons shrimp with aji rocoto (a spicy red Peruvian chile), garlic, cilantro, cumin and coriander.

To marinate skirt steak for churrascos—the iconic skewered meat served at South American steakhouses—Lamas uses chimichurri made with fresh oregano, parsley, cilantro and garlic. “Chimichurri is more of a steak sauce, but I love to use it as a marinade,” he says.

Even without a grill, it’s possible to achieve a parrilla effect. To get grill marks on 10-ounce pork chops,  Executive Chef Brandon Warren of Tortilla Republic in West Hollywood, Calif., uses a cast-iron grill-top skillet.

Before the chops hit the pan, Warren marinates them in an ancho chile brine to ensure they cook evenly without drying out. “There are no coals necessarily, and you can get the marks,” he explains.

Oakland-based writer Kate Leahy earned her grilling chops while working on the line at Terra in St. Helena, Calif.

Words to Grill By

Recent books that dwell on heat and smoke:

"Live Fire: 125 Recipes for Cooking Outdoors"
Michael Chiarello (Chronicle Books)
Chiarello of Bottega in Yountville, Calif., shows how to maneuver in a fireplace, among other hot spots.
Recipe to try: Skewered quail with grape salad and citrus-rosemary salt 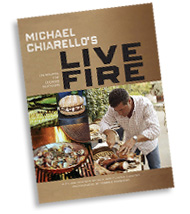 "Smoke: New Firewood Cooking"
Tim Byres (Rizzoli)
The chef of Smoke in Dallas shows how to build your own pig roaster.
Recipe to try: Tejano barbacoa 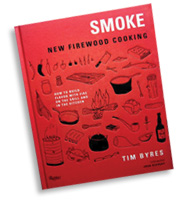 "Smoke and Pickles: Recipes and Stories from a New Southern Kitchen"
Edward Lee (Artisan)
For this Louisville, Ky.-based chef, smoke is as much a taste as sweet, sour, bitter, salty and umami.
Recipe to try: Peach-ginger glaze on anything grilled 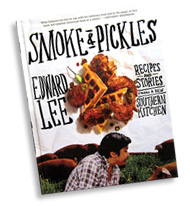