❱ A vegan, paleo diner and a person with multiple allergies walk into a restaurant.

Is this a chef’s worst nightmare or the new norm for Saturday service?

Given the recent uptick in restrictive diets, the honest answer is probably both. More than a third of respondents in a 2018 survey on food and health reported that they follow a “specific eating pattern,” such as paleo, gluten-free, high-protein or ketogenic diet, according to the International Food Information Council Foundation.

“I’ve heard people say things like, ‘Why don’t they just stay home if that’s all they can eat?’” says Jason Vincent, chef-partner at Giant in Chicago. “They want to go out, and we want them to come out. We want to make them what they want to eat whenever possible.”

Knowing how to meet customer needs and expectations – specifically these customers – can pay off handsomely. Given how tribal diners with restrictive diets can be – not to mention how quickly they exchange information via social media –  going the extra mile for one person can generate a ripple effect of positive buzz. And what better way to gain their trust than by being more accommodating than your competitors?

Specialty menus at chains, such as the gluten-free section at The Cheesecake Factory or vegan menu at Buca di Beppo, have set the expectation that smaller independent restaurants can instantly adjust their menus.

But that’s not so easy. To ensure his kitchen is ready for substitutions, Vincent preps two versions of certain dishes.

“When we have anchovy in a dish, let’s say it’s an anchovy vinaigrette, we’ll always have a second vinaigrette with no anchovy in it (for vegetarians),” Vincent says.

The other option is to adopt a “one dish serves all diets” approach. At ArtScience Culture Lab & Café in Cambridge, Massachusetts, executive chef Benjamin Lacy ensures at least one of his offerings will comply with multiple restrictions. “Oftentimes, I’ll move my vegetarian options to be gluten-free, dairy-free vegan options,” says Lacy.

Pick a dish – think soups – that will be as good without the gluten or animal products. Case in point: mushroom bisque and breaded sweetbreads made with rice instead of wheat flour. “No one does this anymore, but bisque is traditionally supposed to be thickened with rice, not flour,” says Lacy. Sweetbreads are dredged in a mixture of dried, locally foraged mushroom grounds and rice flour, which delivers a crisp exterior without gluten. Chicken can stand in for diners who aren’t into offal.

GIVE AND TAKE ACCOMMODATIONS

Harley Peet, executive chef at Sunflowers & Greens in Easton, Maryland, adheres to the motto, “If you can, then do.” But when he can’t cater to particular restrictions – demand for gluten-free bread, for example, is sporadic, and freezing a few loaves just doesn’t work – he makes up for it by offering a free upgrade or add-on, like a gratis bowl of soup or extra ingredients tossed into a salad.

For meatless diners, CEO Elliot Schiffer would rather feature vegetables than meat substitutes at Mici Handcrafted Italian. Even though it might be cost-effective to toss tofu or tempeh onto his pizzas, doing so would subvert the brand identity. “The beautiful thing about (us) is for $10, you can get something that’s really authentic and comes from this long line of family history,” says Schiffer. “Using a protein that’s soy-based is just too far away from the heritage and the culture.”

How do you make sure your diet-focused diners aren’t eating into the bottom line? Executive chef Ralf Schlegel of Plume in Washington, D.C., preserves profit by setting prices with possible accommodations in mind. “During menu planning, we are already putting thought into it, specifically what we can alter to accommodate the usually heavily frequented restrictions,” he said. “Since the same – if not more – effort goes into a dish with special instructions, we charge the same price point for it as that of a regular dish.”

Other times, there’s no profit to be had – which can be OK. “We make no money upgrading people to a gluten-free crust for $3,” Schiffer said. “I think the gluten-free community is so tired of eating bad crust that’s a 75-cent upgrade. I think what we lose in terms of margin on that we gain in terms of loyal customers.”

A Pizza for Every Diet 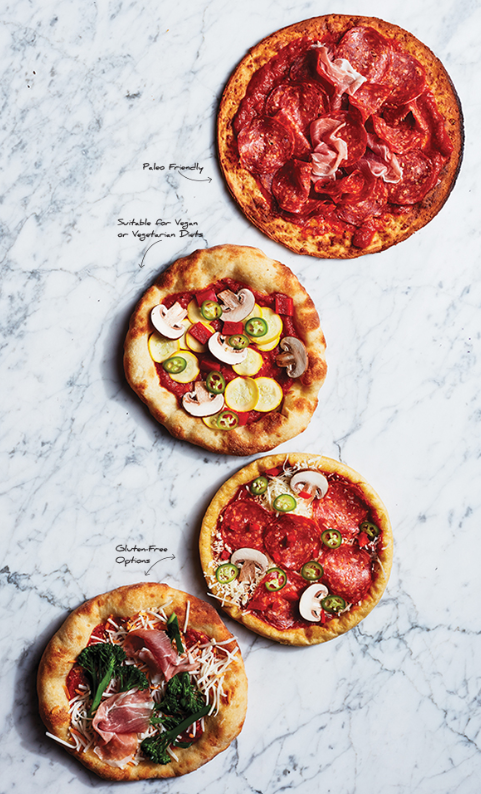 Diners who adhere to a paleo diet avoid dairy, but they welcome vegetables and meat, including pepperoni or sausage. A cauliflower crust can also be gluten-free.

If requests for vegan pizza heat up at your place, offer a dairy-free cheese. Otherwise, stick to sauce, vegetable toppings and a good crust.

To avoid cross-contamination, use different pizza cutters and lay down parchment paper between the crust and the oven.