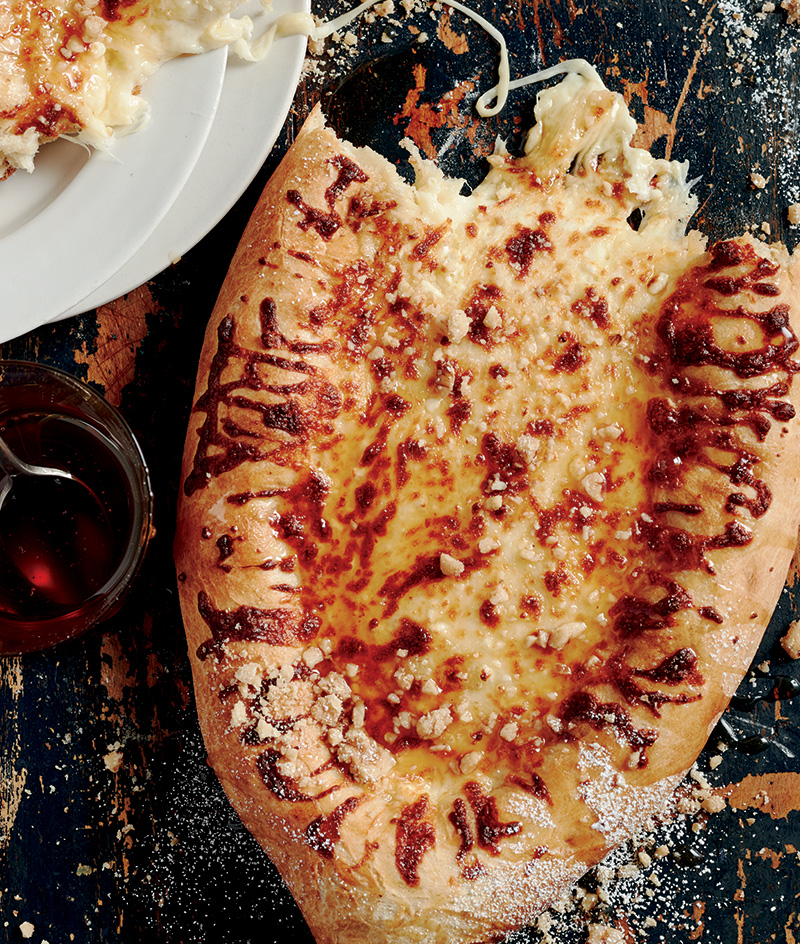 Food from the former Soviet Republic of Georgia is often referred to as the last great undiscovered cuisine of Europe.

But that began to change once U.S. restaurants started pouring Georgian wine and serving khachapuri, a photogenic cheese bread that’s as ubiquitous in Georgia as pizzas are in Italy.

Today, Georgian wines and cuisine have been on a tear. Wine imports to the United States surged 88% in the first half of 2019, according to Georgia’s National Wine Agency, while Georgian-inspired dishes have popped up everywhere from The Brick Shop in Pittsburgh to Imperial Restaurant in Portland, Oregon.

Georgian food is a cross between Middle Eastern and Mediterranean cooking,” says Jonathan Nelms, owner of Supra and Tabla in Washington, D.C., “which draws from the ancient migrations along the Silk Road.” Although Georgian cooking dates back centuries, its spice mixes, fermented foods, vegetable-rich offerings and sweet-sour flavors are resonating on a larger scale and at a rapid clip.

“ IF GEORGIANS HAD COME TO AMERICA BEFORE THE ITALIANS, EVERYONE WOULD BE EATING KHACHAPURI INSTEAD OF PIZZA.”

Netty Davitashvili, the owner of Cheeseboat in Brooklyn, New York, says the popularity of khachapuri – Georgia’s iconic cheese bread – lies in its simplicity. “Everybody likes butter, cheese and bread,” she says. 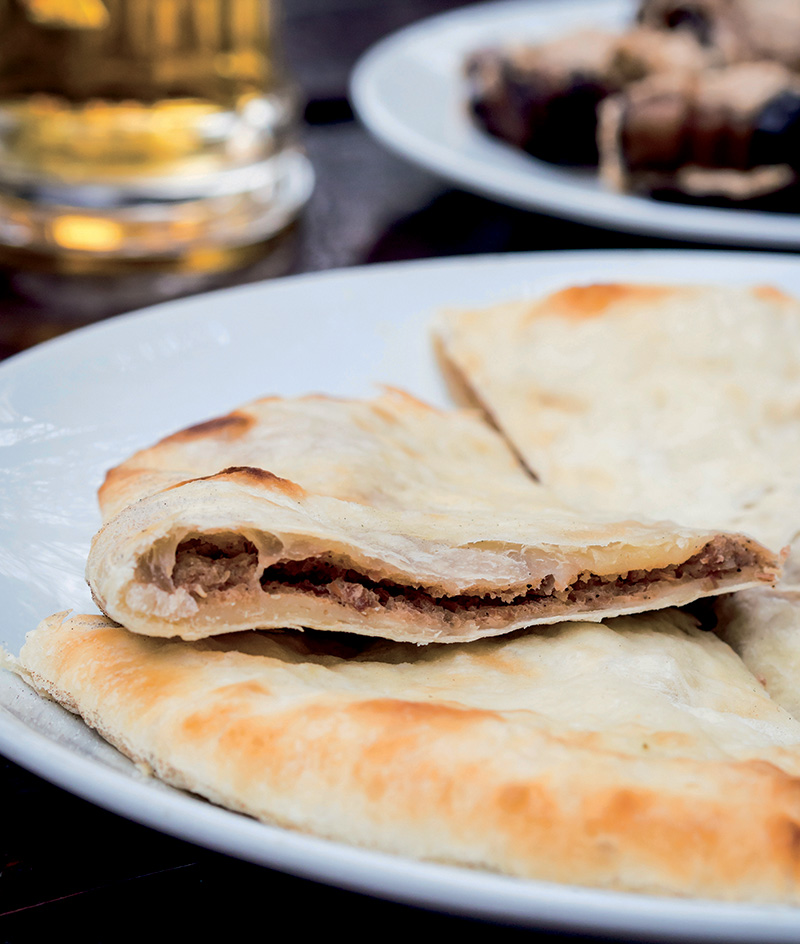 Most American diners associate khachapuri with the Adjarian version: a boat-shaped open-face pie that’s ideal for toppings. Diners can rip off pieces of crust and dip them into its gooey center. Davitashvili uses a blend of Italian mozzarella, feta and brie, and offers Americanized versions – including eggs Benedict khachapuri and shrimp and grits, both of which have turned a low-cost Georgian staple into a profitable brunch novelty.

“GEORGIA IS LIKE BERLIN 20 YEARS AGO: AMAZING FOOD THAT NO ONE KNOWS ABOUT.” 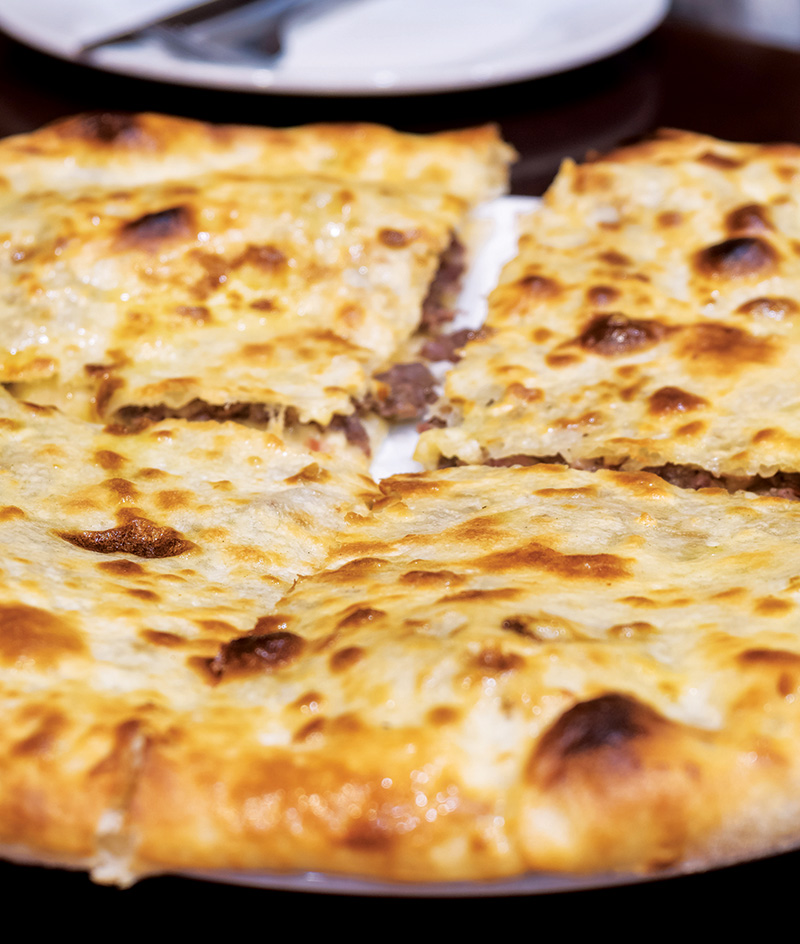 While Supra’s dining room in Washington, D.C. focuses on classics, its happy hour bar menu is full of snacks that encourage guests to sip its low-cost, high-profit Georgian wines. Think ajika-spiced chicken wings in a Georgian cheese sauce or a Georgian-style corn dog. Supra’s kitchen uses kupati (a spicy sausage made with pepper, sumac and tart barberries) and dips them in traditional cheese grits. The
result, says Nelms, is like a sausage-stuffed arancini. “People like that every ingredient in there is Georgian, but they’re never going to find these dishes in Georgia,” says Nelms.

When Georgian chefs talk about saffron (or saphran) they’re referring to ground orange marigold petals, which Chef Zach Engel of Galit in Chicago says can imbue any dish with an aura of spring. “There’s something beautifully sweet and subtle about marigolds, especially when combined with other Georgian herbs,” says Engel, who grows micro-herb marigold plants as a way to cut costs.

He flutters dried marigold petals atop his coal-roasted dukkah carrots for color and sweetness, and channels the Caucasus with his bazhe sauce.

In the spring, the sauce is draped over asparagus, but can be applied to any seasonal veggie, making it a versatile dressing for vegan and vegetarian dishes. 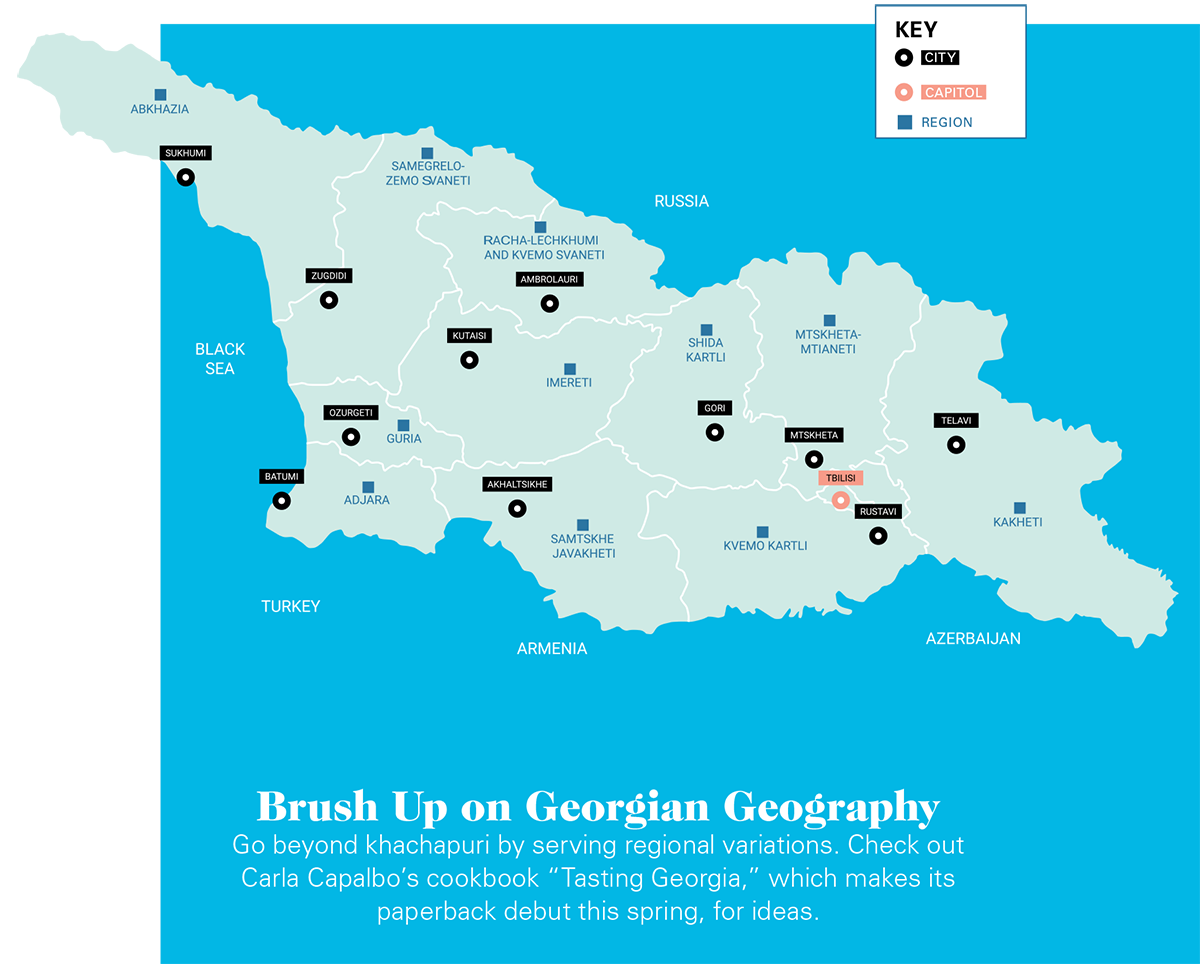 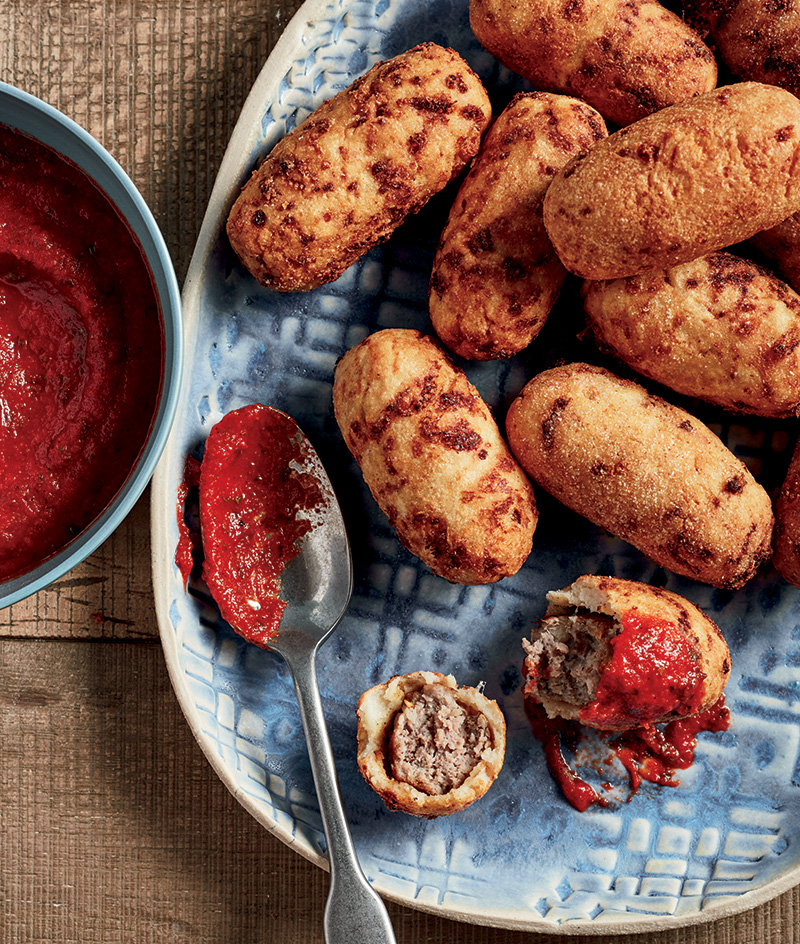 At Chama Mama in New York, owner Tamara Chubinidze relies on traditional shallow clay cooking vessels called ketsi. “Anything cooked in ketsi – meats, potatoes or vegetables – gains a gentle smoke flavor and is 100 times more crispy than cooking on the stove,” says Chubinidze, who bakes her ketsi in the oven.

Everything from her Georgian cornbread to a garlic-sauced game hen called shkmeruli are cooked in ketsi, which appeals to health-conscious diners, because they don’t require oil or butter. “They’re like a magic wand; they’re so easy to cook with,” she says. “All you need is the clay and some heat.” Should operators want to extend the clay theme, consider ordering Georgian clay wine vessels – called piala – which Chubinidze serves exclusively at the bar. 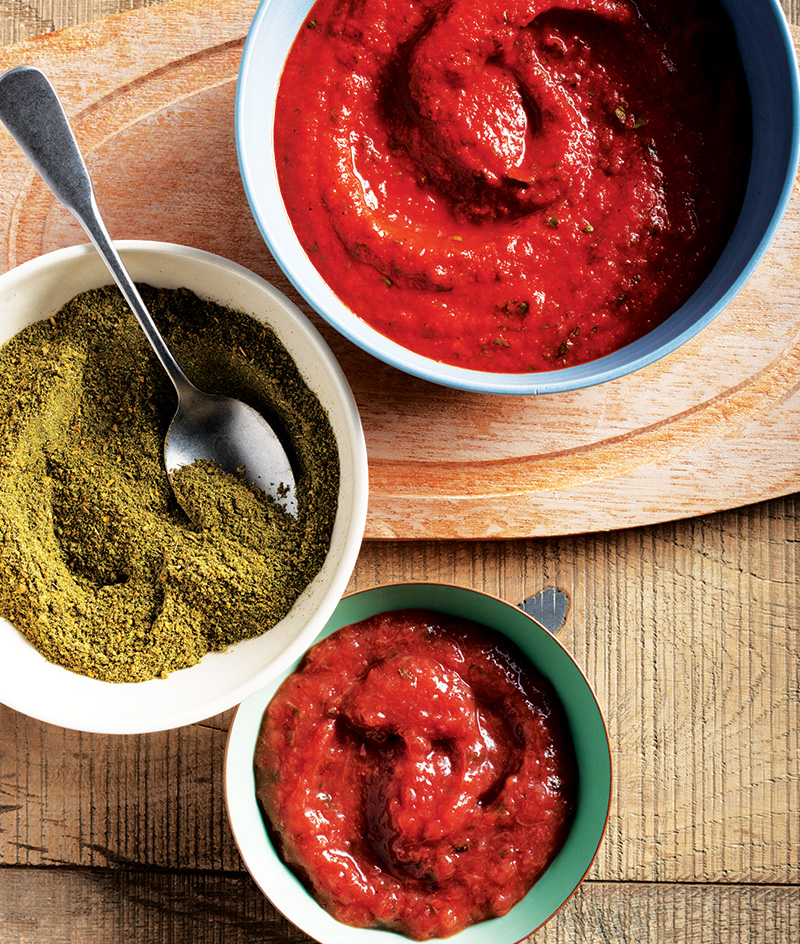 Spread the Phkali: Traditionally, phkali are colorful vegetarian pâtés made with minced seasonal vegetables and spiced walnut paste. At Noosh in San Francisco, however, Laura and Sayat Ozyilmaz inject Middle Eastern and California influences by folding in tahini and kale, and smoothing it out to create a kind of phkali hummus.

Just Kraut It – inspired by Georgia’s love for fermented vegetables, Chef Brandon Blumenfeld of the Brick Shop in Pittsburgh serves a probiotic-rich sauerkraut made with fenugreek, celeriac and paprika.

SPICE IT RIGHT: SPEAK GEORGIAN WITH A SPICE OR A SAUCE.

Tkemali – the chimichurri of the Georgian table, a slightly acidic sauce made from green plums and spices. Pair with grilled meats or short-rib khinkali dumplings, like they do at Odd Duck in Milwaukee. 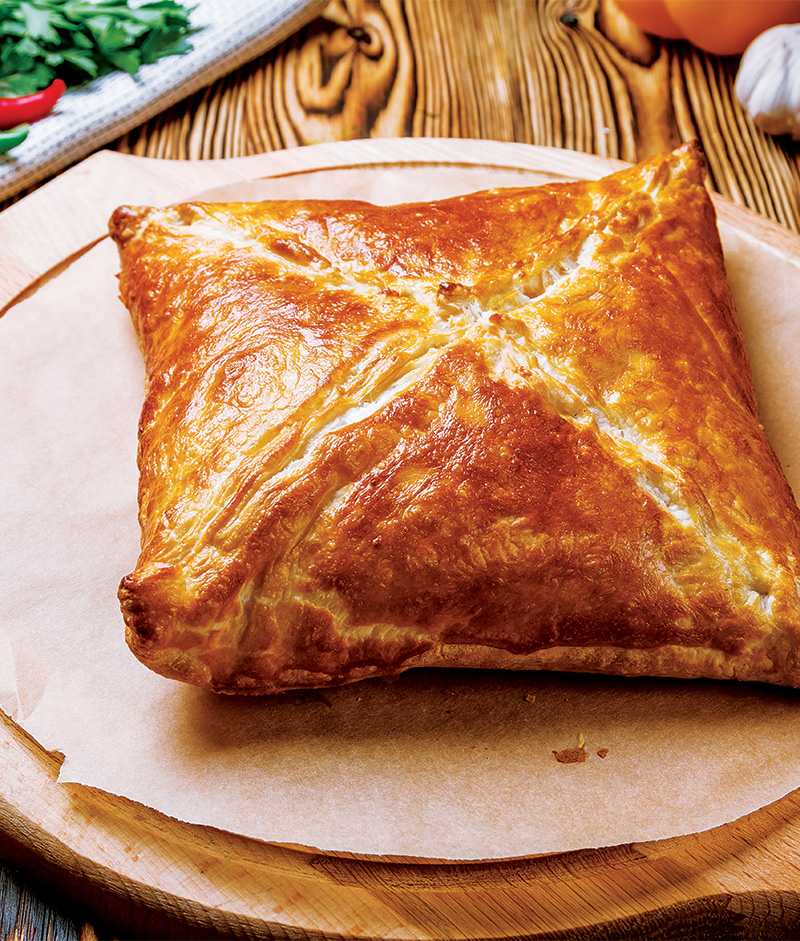 Ajika – Georgia’s beloved hot sauce can be green or red, depending on the peppers. Pair with fish, like Biff Gottehrer’s red adjika branzino at Ripplewood Whiskey & Craft near Philadelphia.