To understand the power of crispy chicken sandwiches, consider who was in line when Shake Shack launched its version last summer only at locations in Brooklyn, New York. The expected hipsters represented and early adopters showed up in force. But others mingling with these locals traveled far from their homes, journeying through tunnels, over bridges, via train—sometimes two trains. Yep, Manhattanites. Together over two days they depleted all the Chick’n Shack sandwiches at the three locations, a supply that took a week to replenish.

And they’re not the only ones who seem willing to do anything, even deigning to travel to an outer borough, for a crispy chicken sandwich. As crazy as people are for fried chicken, they’re even more frenzied for fried chicken between a bun. Chick-fil-A is surpassing KFC in U.S. sales even though the chicken sandwich chain has a fraction of KFC’s locations in comparison.

Chefs all over the country are rolling out their own chicken sandwiches, some inspired by the southern “hot chicken,” and others pairing the deep-fried meat with contrasting flavors and textures. Bite into these examples to get an idea of what’s fueling the crispy chicken frenzy. 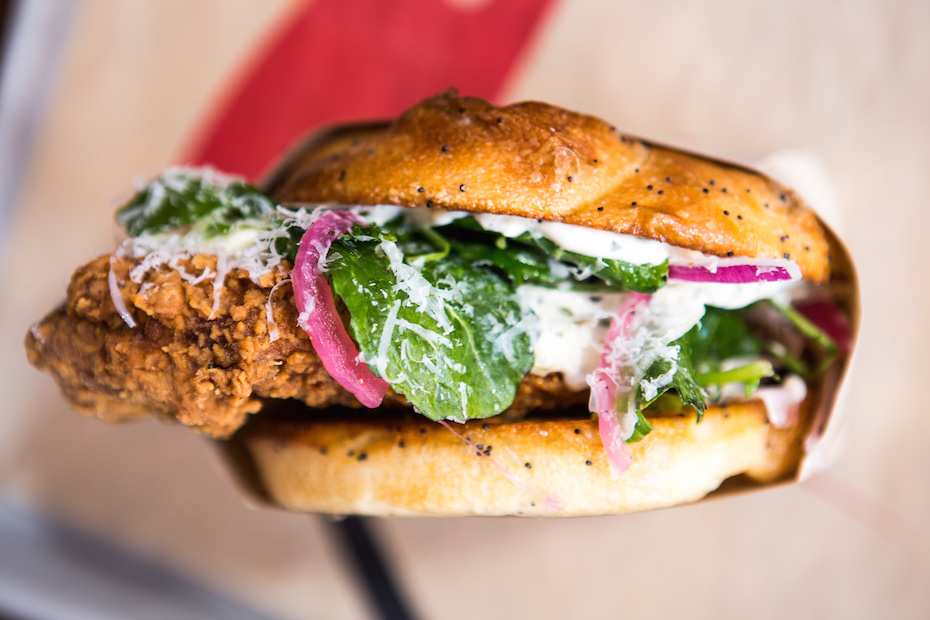 1. COP in a Sandwich

“Top Chef” Richard Blais and his cooking partner Jon Sloan can’t help but to have a little fun with The Crack Shack, their San Diego concept dedicated to chicken and eggs.  Feel free to ask whether the idea for the chicken or egg came first. Their version of the crispy sandwich, called the Brick House ($12), is inspired by a center of the plate sensibility with arugula, fennel and caper mayonnaise.

At Roofers Union in Washington, D.C., “Top Chef" contestant Marjorie Meek-Bradley gives her thigh-only sandwich (pictured above) a couple of doses of East Asian flavor. The fried chicken thigh sandwich ($13) gets a 24-hour marinade of fish sauce and soy sauce and a glazeof a Sriracha honey served on ciabatta. 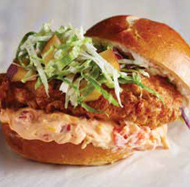 At Artisan Meat Share in Charleston, South Carolina, Chef Craig Deihl adds heat three ways to his Hot Fried Chicken & Biscuit sandwich ($10). It begins with Korean pepper powder in the coating, a black pepper mayo that’s schmeared on a biscuit, and a housemade hot sauce made with melted ‘nduja, a spreadable fiery sausage that’s tossed with the chicken. 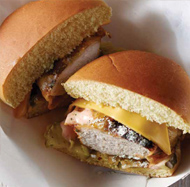 5. Once Is Not Enough

Last fall, the chicken sandwich at Federal Donuts in Philadelphia became a permanent menu item after it debuted as a runaway hit over the summer. The chicken is double fried (the first fry is really sort of a blanch) and seemingly simple to the uninformed eye. But just take a closer look and you’ll see the savory, umami-packed dehydrated buttermilk ranch seasoning that’s sprinkled on the chicken ($6.75).