These are precarious times for chefs, especially independent operators who cannot rely on economies of scale and the resources that larger restaurant groups offer. Streamlining menus and creative adjustments, from ingredient substitutions to production techniques, have been crucial to survival. 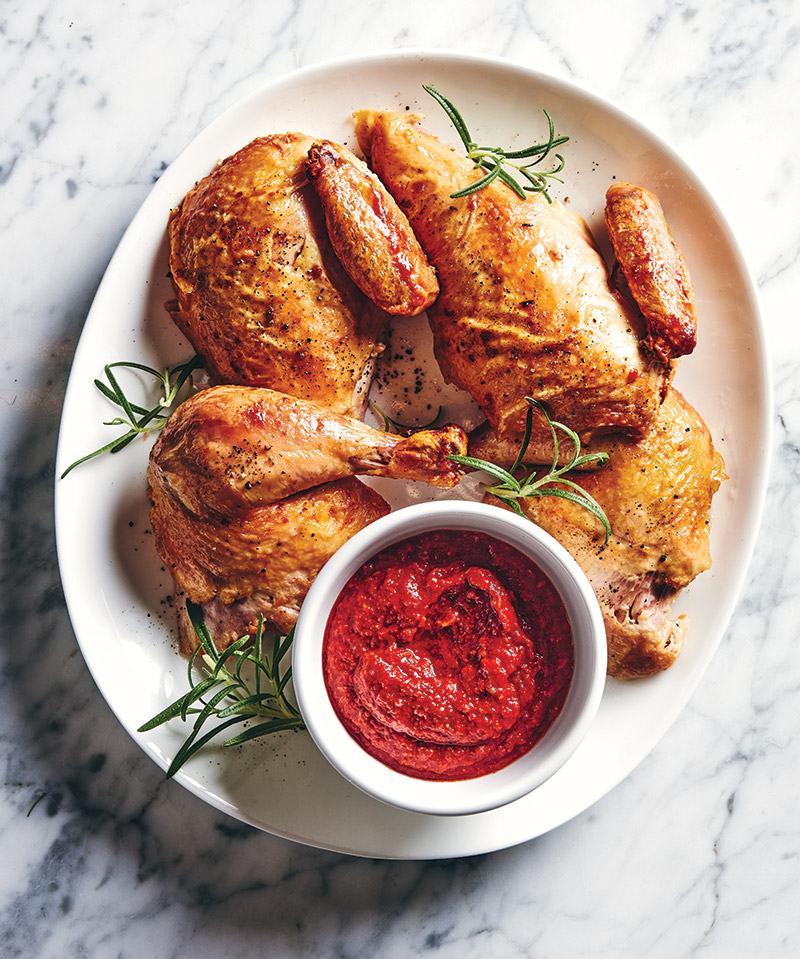 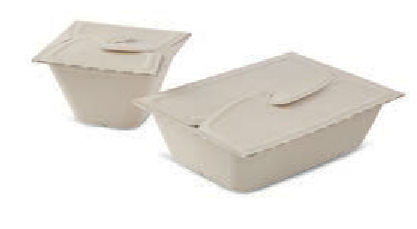 These ingredients, from sauces and condiments to marinades and spice mixes, can be used in multiple ways, chefs say. Because crisis breeds creativity, these chefs are stretching their boundaries and finding new ways to do more with less. Some takes:

At Bulrush in St. Louis, Chef Rob Connoley runs a forage-driven restaurant, with an emphasis on preserving seasonal ingredients to use year-round. A bumper crop, including imperfect produce, means better prices and requires the investment of time up front, but it results in preserved goods that keep – even in a possible pandemic closure. For example, he turns vegetables that might otherwise be composted into liquid amino. A sweet potato amino that he brushes over whole-roasted cauliflower for his bar menu requires just three ingredients – sweet potato, rice koji and sea salt. It packs a flavorful umami punch that Connoley describes as similar to soy sauce, but with more nuance and depth.

The roasted cauliflower is served in a cast-iron skillet with fall foraged mushrooms and an inserted steak knife for a dramatic presentation. “It’s a high-payout dish with minimal effort,” Connoley says. “It’s such an easy recipe – two minutes of hands-on time and then a couple visits to the oven during baking.” Working in a small space with just himself and his sous chef, recipes like this one, which don’t require constant vigilance, allow them to multitask and be more productive.

Chef Sujan Sarkar is also working with a skeleton crew at Rooh’s San Francisco and Palo Alto locations. He’s not cutting any corners, but he’s simplifying dishes to streamline prep for his smaller team in the name of efficiency.

Sarkar continues to make fresh curries every other day, including one for tandoori monkfish, but he’s no longer serving the accompaniment of kadambuttu, steamed rice balls stuffed with monkfish liver masala and topped with seasonal vegetable pickle. The monkfish liver requires a lot of labor and must be made fresh each day, a luxury he can’t afford in a pandemic. 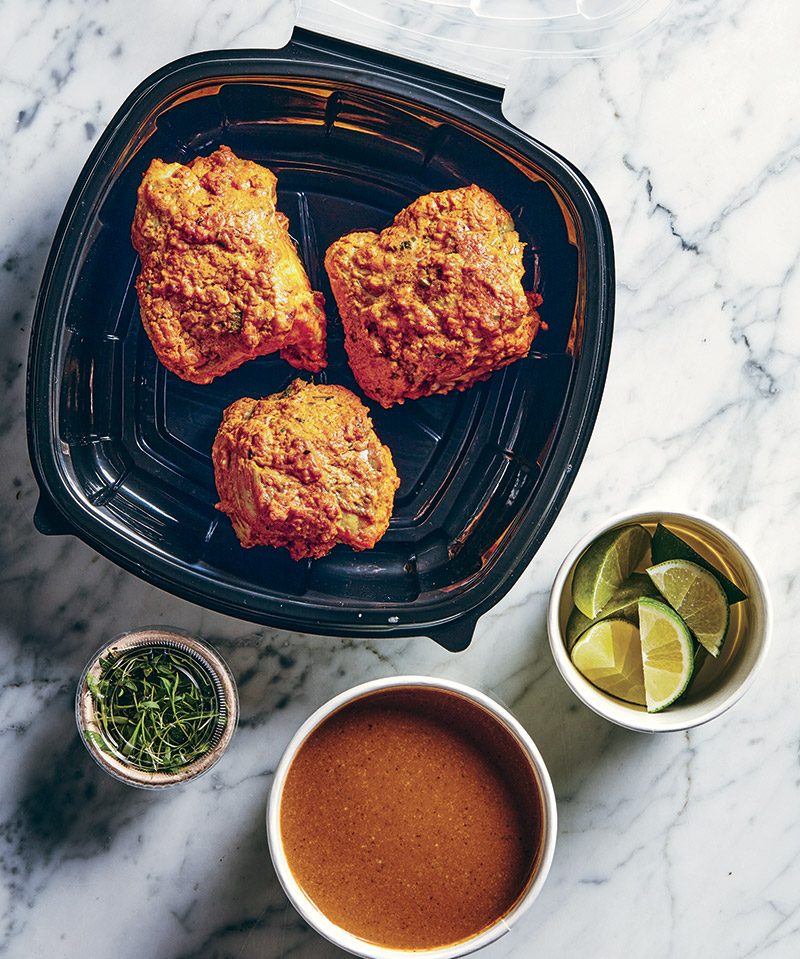 “We are working with less people now, so we can’t handle dishes with so many components,” he says. An ember-roasted sweet potato chaat has replaced a more complex lentil-stuffed spiced potato cake shallow-fried in clarified butter. The snack is still topped with garnishes of crispy kale, tamarind and mint chutneys, but Sarkar is forgoing the shattered raspberry embellishment that requires liquid nitrogen to prepare. “Flavor-wise everything is pretty similar,” he says. “But visually and from the technical point of view, it’s a little simpler.”

The market-style menu at The Lynhall in Minneapolis allows guests to create individually plated dinners, pairing meat or vegetarian entrées with a la carte vegetable and starch sides. Chef Nettie Colon is still serving the full Lynhall menu, but with a smaller team cross-trained to prepare more dishes at once, she has turned to buying some pre-prepped ingredients to save on labor and minimize food waste. For example, she’s purchasing romaine hearts instead of whole heads of lettuce, and chuck flap that’s already trimmed instead of chuck roast. 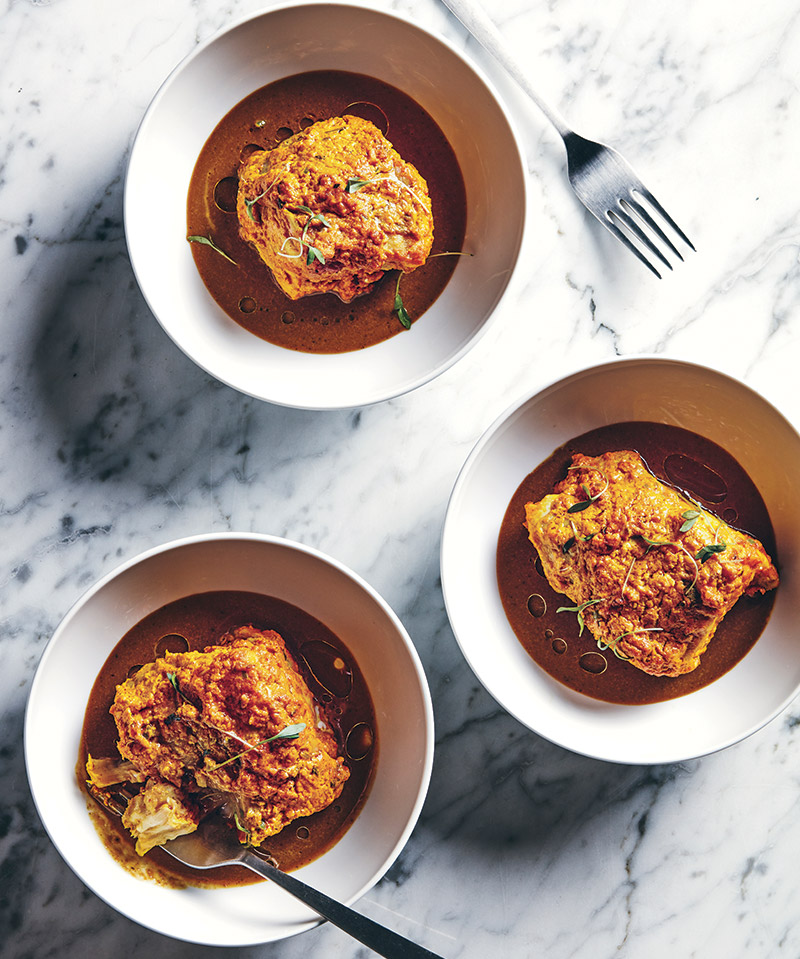 “When we would portion the chuck roast off to meet what we were serving, we would have a lot of waste that turned into a hash for brunch,” Colon says. “When we had to close and brunch went away, we decided that it would be better for us to spend 50 cents more and have a product that had zero waste.”

Colon is still making her piri piri sauce for rotisserie chicken from scratch, but substituting more shelf-stable piquillo peppers for fresh red peppers. Then, with the addition of just one ingredient – toasted crushed almonds – that piri piri sauce becomes a romesco that’s served with green beans. The piri piri can be used as a mother sauce for other proteins and vegetables. And by using it to make a romesco, Colon has created another foundation that works similarly.

While Colon remains committed to scratch cooking, she’s made concessions for the sake of shelf stability. For now, rather than making aioli from scratch with egg yolks and olive oil, she’s buying Hellmann’s mayonnaise and doctoring it with spices. 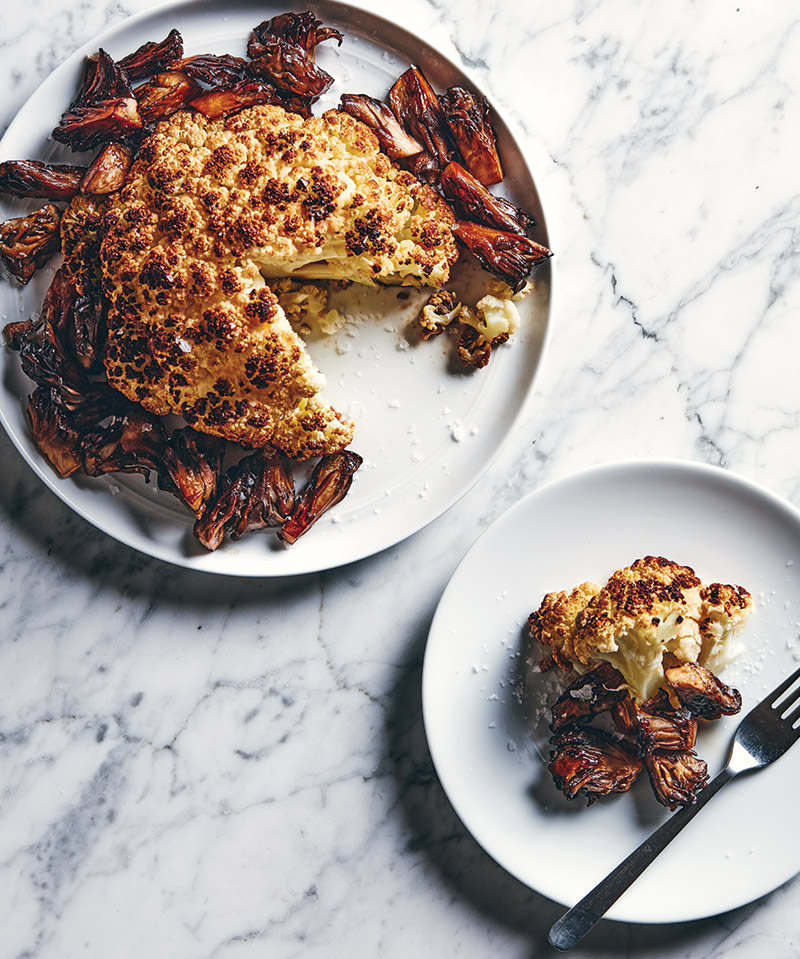 When snapper for a 20-year signature dish became unavailable, and the tableside presentation of cracking a salt crust served with sauce vierge, herbs and ogo became inappropriate under social distancing protocols, Chef Jeremy Shigekane at Honolulu’s M By Chef Mavro, adapted the recipe to use ono or wahoo. He brines the fish to keep moisture and flavor intact instead of baking it in a salt crust, since he is no longer doing tableside service. Shigekane says that this substitution, along with skipping the peeling and seeding of tomatoes for the accompanying sauce vierge, saves him about 70% on both food and labor costs.

“The new prep is very cost-effective,” Shigekane says. “The dish has done well because the flavor and essence is the same, just a little more causal.”

When prices fluctuate because of availability, there’s always a substitution, Shigekane says. For example, a fish may be in season that’s cheaper or the dish can change to include lower-cost items and smaller portions of the higher-priced protein, such as a fish stew with vegetables.

Other times, it’s best to eighty-six the dish. For now, the days of lower-cost dishes making up for high-cost ones are over. “It’s about being more creative than ever to do more with less,” Colon says. 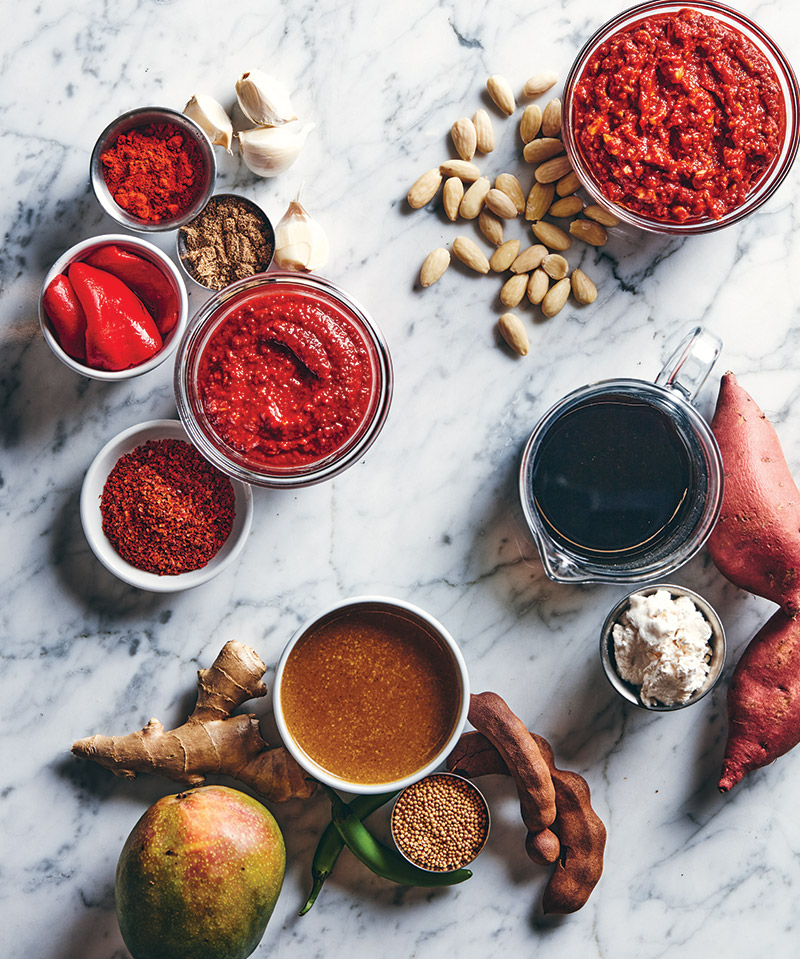 • At Nico Osteria, Chef Tim Graham still makes pasta fresh, but he’s forgoing filled varieties and sticking to noodles like angel hair, tagliatelle and rigatoni to save on labor

• Chef Ken Frank at La Toque is more committed to cross-training than ever, which allows for flexibility if somebody is sick. “Line cooks are spending time in pastry,” he says. “Servers are learning to bartend.”