With safety at the top of consumer concerns, pandemic-era restaurant design will have to pull off a difficult task: creating spaces for diners and workers that seamlessly integrate safety into the restaurant’s look and vibe.

“Make guests feel safe, but also give them a compelling experience,” says Tanya Spaulding, principal of Shea Design in Minneapolis.

When states began easing shelter-in-place orders, many restaurants implemented quick-fix distancing
and cleaning measures: spreading out tables, installing sanitation stations and maximizing outdoor areas. But now they’ll have to make those changes a natural extension of their spaces, so they don’t look like hasty, temporary add-ons. Similarly, restaurant designers say new restaurants will need to consider the new normal.

TURN THE QUICK FIXES INTO A LASTING LOOK

If a restaurant starts seating patrons in its parking lot or other outdoor space, adding greenery and lighting can make the space more hospitable, and even festive, Spaulding says. 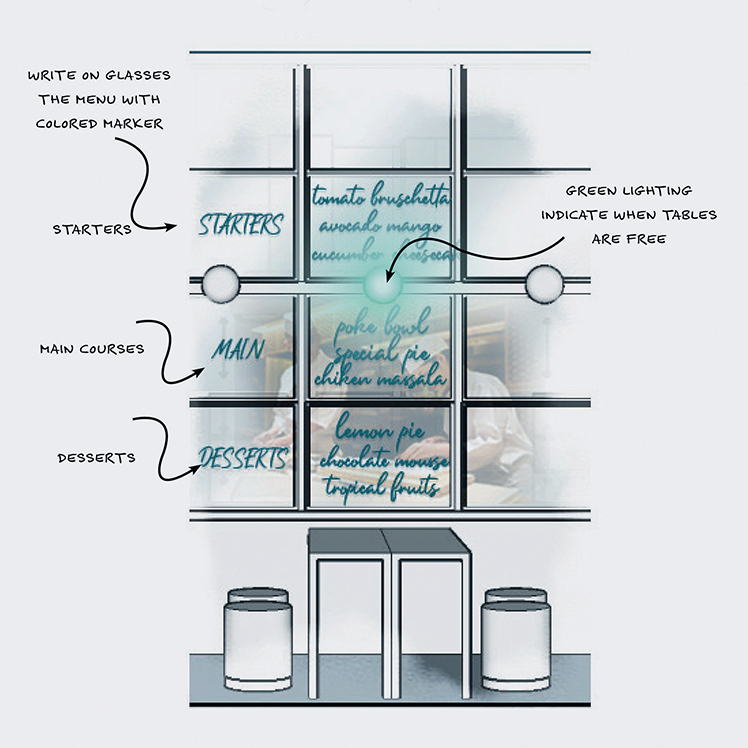 “The goal is to make any modification look like it’s always been there, even though we know it hasn’t,” says Shelley Satke Niemeier, interior designer at SPACE Architecture + Design in St. Louis.

Instead of propping up a curbside table for carryout, some of SPACE’s clients have installed drive-thru-like panels in their storefront windows. “We don’t want it to look janky,” Niemeier says. To maximize efficiency, the panels are placed near the host stand, so hosts can handle both pickup patrons and in-house diners.

Hastily installed sanitation stations will instead need to become permanent fixtures. They could be built with the same millwork used elsewhere in the restaurant. “So it isn’t just some hand sanitizer on a shelf; the station is designed into the space,” Spaulding says.

Tacking up handwritten signs to remind diners to keep their distance from one another probably isn’t that effective – and certainly isn’t attractive. A restaurant can create more engaging visual reminders that use its brand and logo. The messages should be colorful and positive. They might be on chalkboard signs or sandwich boards. “Keep the messaging friendly, simple and on-brand,” Spaulding says.

Likewise, instead of slapping down duct tape onto the floor to indicate how people should move through the space, work the venue’s brand into those floor cues. Embellish them with lights embedded in the flooring, suggests Griz Dwight, a principal at GrizForm Design Architects in Washington, D.C.

Given the higher risk of catching coronavirus in crowded indoor spaces, people understandably feel safer eating and socializing outside. Studio KDA in Berkeley, California turned a street-side parking spot into an outdoor patio for a client – just by using a few water-filled, concrete traffic barriers at about $150 to $200 each. Permanent parklets can cost $20,000 to $40,000, says Marites Abueg, an architect and principal of Studio KDA. “To save money, we designed a parklet with a wheelchair-accessible table on a partial platform, while the rest of the tables are on the street level.”

Relying on an al fresco-only dining concept, however, isn’t a viable option year-round for most restaurants. Operators will need to find ways to bring the outdoors inside. That might mean adding portable heaters or installing more windows that open.

“Bringing more fresh air into the space will be a critical part of the design of the future,” Spaulding says.

Operators might install greenhouse-like pods outside, so each party can sit by itself while feeling visually connected to their environment and their fellow diners. Bonus: Glass pods are easily cleanable. “Restaurants will blur those lines, so customers inside feel they’re outside,” Dwight says. 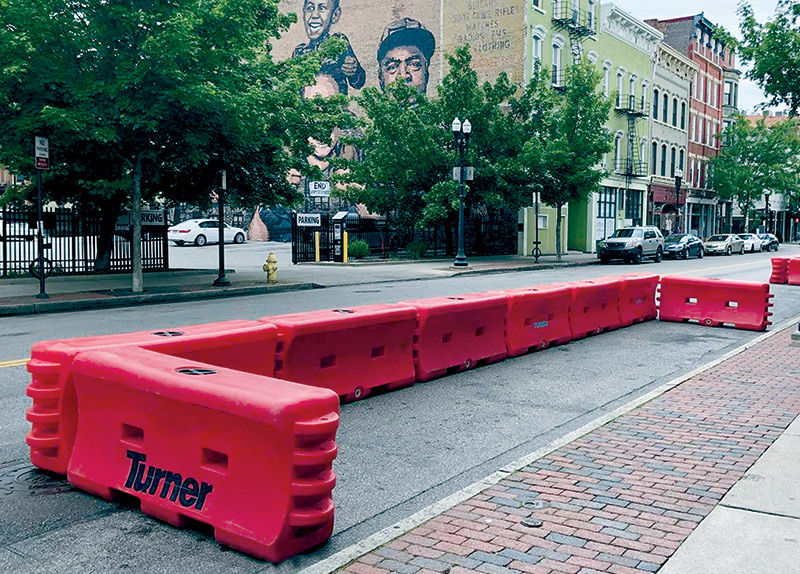 Consider embracing the divider and making it your own by using vinyl film to add color and texture, or even a mirrored film to reflect light. Creating psychological and physical safety while maintaining a sense of hospitality and brand experience is key, she says.

“ BRINGING MORE FRESH AIR INTO THE SPACE WILL BE A CRITICAL PART OF THE DESIGN OF THE FUTURE.”

Whatever divider material a restaurant selects, it will have to withstand regular cleaning. But Wilson Associates has dreamt up a conceptual design where dividers’ cleanability isn’t an issue. That’s because they’re made of water.

Designer Keiko Matsumoto asked a friend who worked in the food industry in Japan which restaurants were doing well during the pandemic. “He said ramen restaurants, because people can go in, eat, get out and not interact with waiters,” says Matsumoto, design director at Wilson Associates’ New York studio.

Taking that as their cue, Matsumoto and her colleagues imagined an establishment where, instead of one central entrance, each party has its own garage-door entrance to its own dining area, with glass panels that only open up to the kitchen when the food is ready. Instead of heavy partitions, waterfalls descend from the ceiling to separate each party. The water walls can be moved to make smaller or larger dining spaces.

Shuffling furniture to create separation among tables is probably the easiest and cheapest safety design measure. Move booths, which typically line walls, to the middle of the space. That way, diners can get in and out on both sides without climbing over each other. Staff can serve from both sides as well to avoid invading their personal space, Dwight says. “It protects the server as much as the diner.”

Restaurants that removed a lot of tables and chairs shouldn’t let all that space sit empty. They can turn it into a small pop-up market to sell some of their own items, like sauces or desserts. They can also fill those vacant spaces with beautiful plants, flowers, herbs and floor lamps.

“Don’t add clutter back in, but make it feel more compelling,” Spaulding says.

And, she adds, when choosing new colors or materials, bear this in mind: Because people tend to associate brighter with cleaner, we might see a shift from the recent trend of dark, lush fabrics and wallpapers.

» Install drive-thru or walk-up panels to windows or entrance.

» Brand safety protocols so they blend with the current design.

» Create carryout and sanitation stations that blend with the host stand.

» Fill empty space with provisions for a better look that also helps increase the bottom line.

» Move booths to the center of the dining room for better flow.