When business slows or grinds to a halt, innovation doesn’t stop. It kicks into overdrive. Just look at pizza. 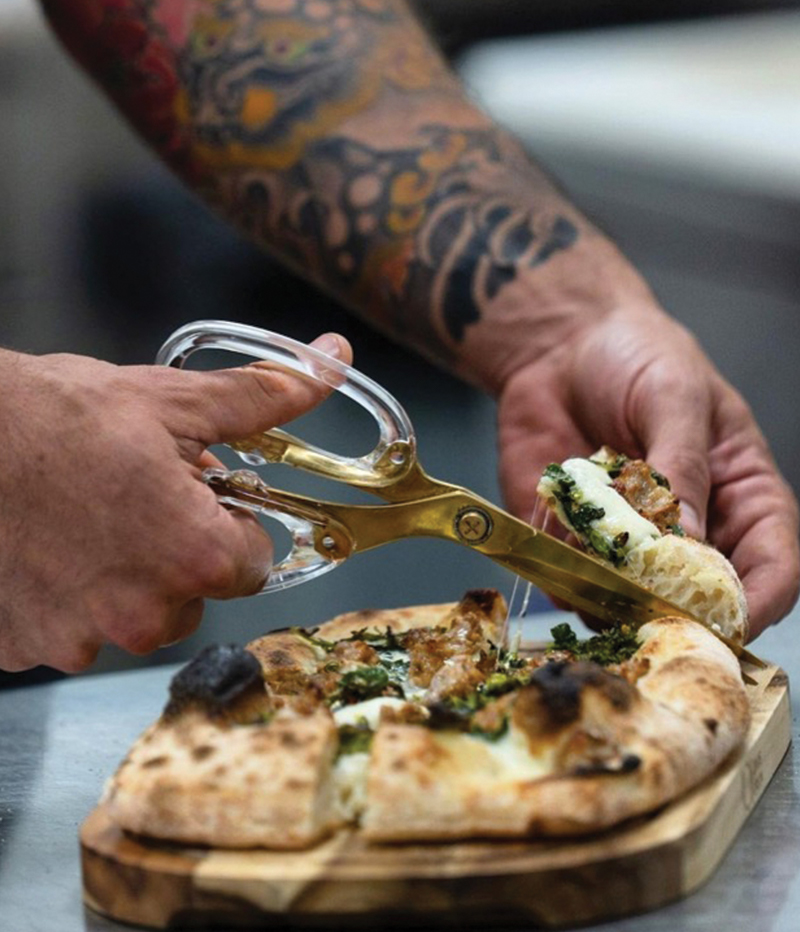 Its low-cost foundation (flour and water), and its standing as America’s favorite comfort food converged as a wake-up call to the potential of sales and profitability. As restaurants emerged from the pandemic this year, dough and pizza toppings crossed culinary borders and became more adventurous, while picking up healthier and meatless options.

For many chefs, like restaurateur Marc Forgione, the youngest winner of the Food Network’s “The Next Iron Chef,” ideas bubbled up from experimenting at home. Other fine dining chefs from David Kinch to Wylie Dufresne opened creative new pizzerias across the country, re-imagining and refining what pizza can be.

The New ‘P’ In Pizza

For years, the industry has been looking for ways to innovate through the dough, from working in herbs and seasonings to stuffing the rim with crust. The innovation to date, however, is all about flavor and texture.

Pinsa is a lower carbohydrate crust that began picking up steam just prior to the pandemic. The dough consists of rice, soy and wheat flours – unlike its traditional counterpart, which typically uses solely wheat flour. Pinsa dough is also more hydrated at nearly 80% water and rises during a long, cold 72-hour fermentation. This process makes the pinsa dough less caloric (compared to traditional pizza dough), and easier to digest, all while yielding a light, airy pizza with a crunchy crust. 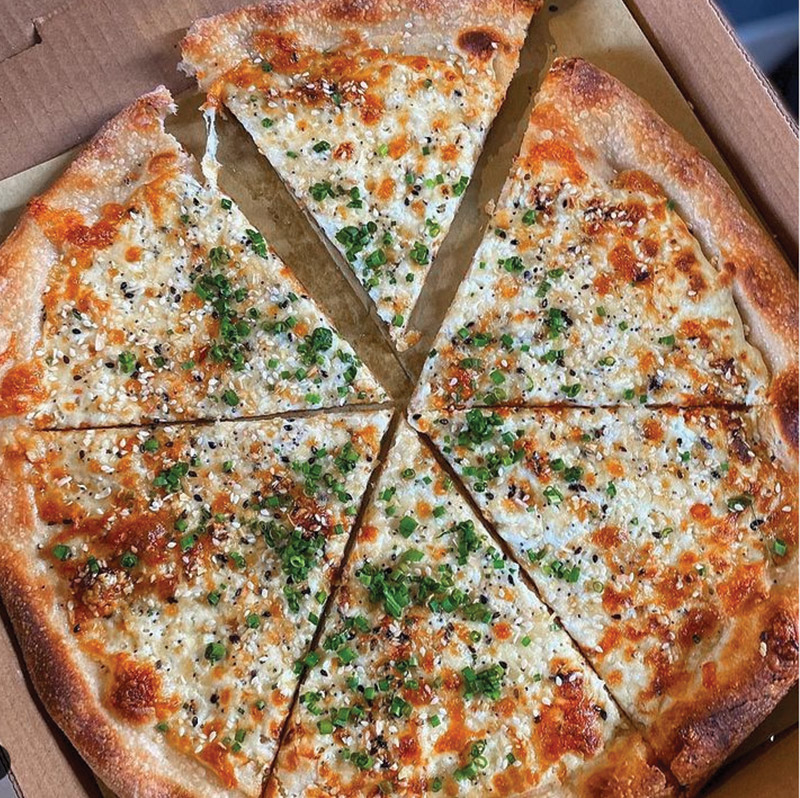 At Civico By the Park in San Diego, chef/owner Pietro Gallo uses the Di Marco flour blend imported from Italy. After a 72-hour fermentation (the dough is shaped into balls on the second day), Gallo takes the pizza balls out of the walk-in four hours before service and lets the balls rise at room temperature. Pinsa flour is extremely sensitive to humidity and change in temperature.

“This dough is very fragile and so full of water that you need to be very gentle,” he says. “It doesn’t need to be stretched like the regular pizza, but we just touch it with the tip of the finger, and it opens up by itself.” After receiving certification from Di Marco, Gallo continued training his team for another month before launching pinsa on the menu, and one year later, pinsa has overtaken pizza in popularity. Gallo says that pinsa typically takes about one minute less than pizza to cook in his Cuppone Donatello electric stone oven. 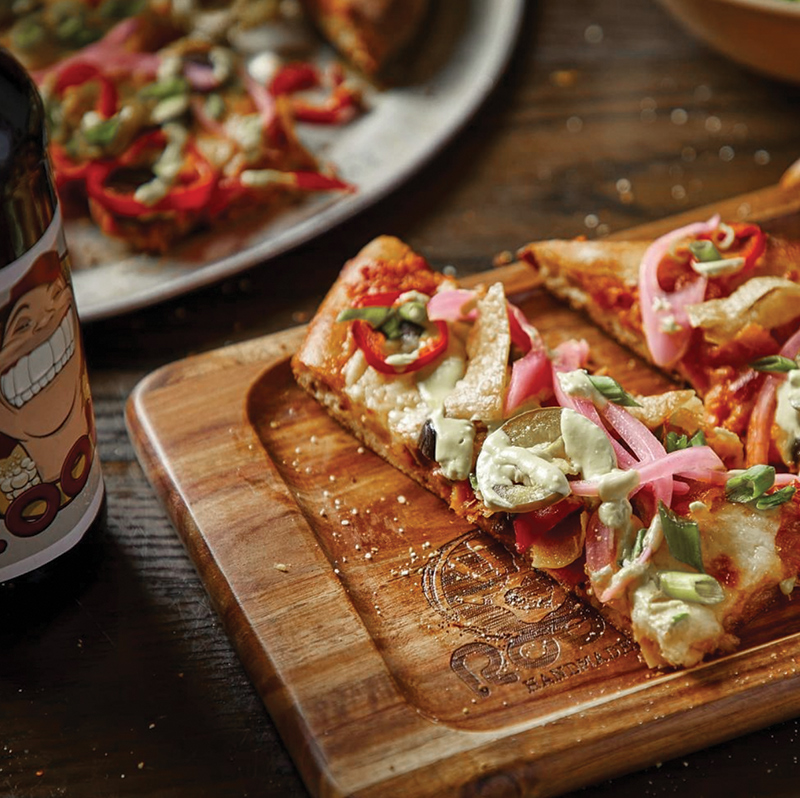 The most difficult part of making pinsa is being delicate enough when working with the dough, which staff easily break. “We don’t want to break the gas that’s inside or it won’t rise properly.” There’s no way to salvage a broken dough or dough that is left too long to ferment. In both cases, once the gas escapes, it’s a lost cause.

Once the pinsa is cooked, Gallo says that it travels better than a traditional pizza and tastes better reheated in the oven the following day because it doesn’t dry out as easily. 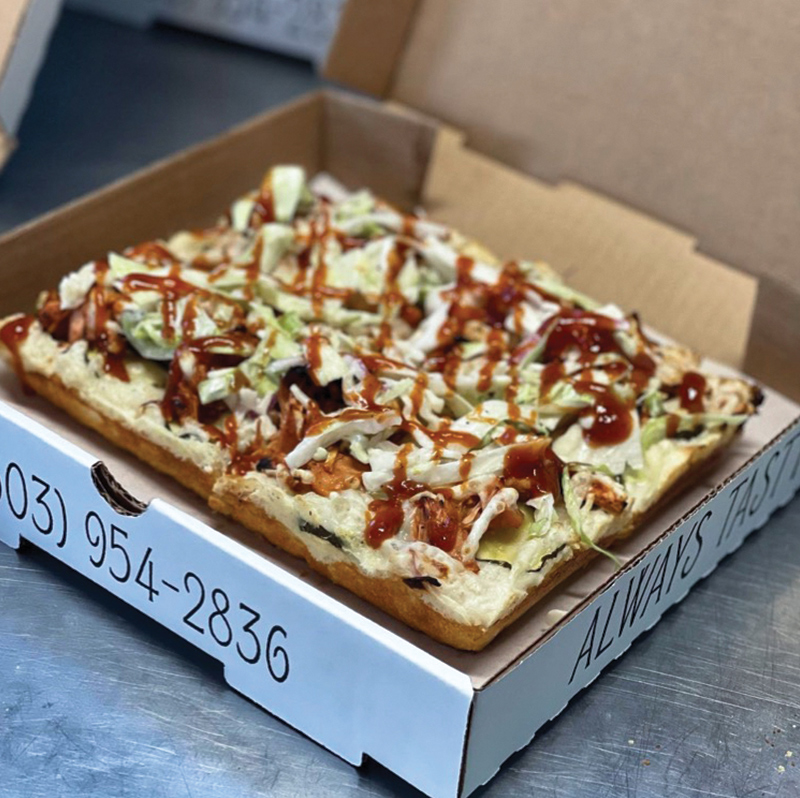 A born and bred New Yorker faithful to the city’s iconic big slice, thin crust style, Forgione wanted to combine that heartiness with Neapolitan pizza, a thinner pizza, but less supportive of toppings. He made an at-home starter to experiment with bread, which led to playing with it as a pizza dough. In addition to his other restaurants, he had recently acquired restaurant, Peasant, in New York City just before the pandemic. The menu currently features a seasonal pizza from the wood-burning oven.

Forgione says he was already working on a pinsa dough with his legendary restaurateur and father, Larry Forgione of American Place. The younger Forgione incorporated the sourdough to the pinsa and introduced it when Peasant reopened over the summer. It features the sourdough starter, olive oil, salt and the ancient grains rice, soy and wheat flours.

The result, he says, is a crust that’s crispy, light and flavorful, in addition to adequately supporting toppings without flopping like Neapolitan pizza. 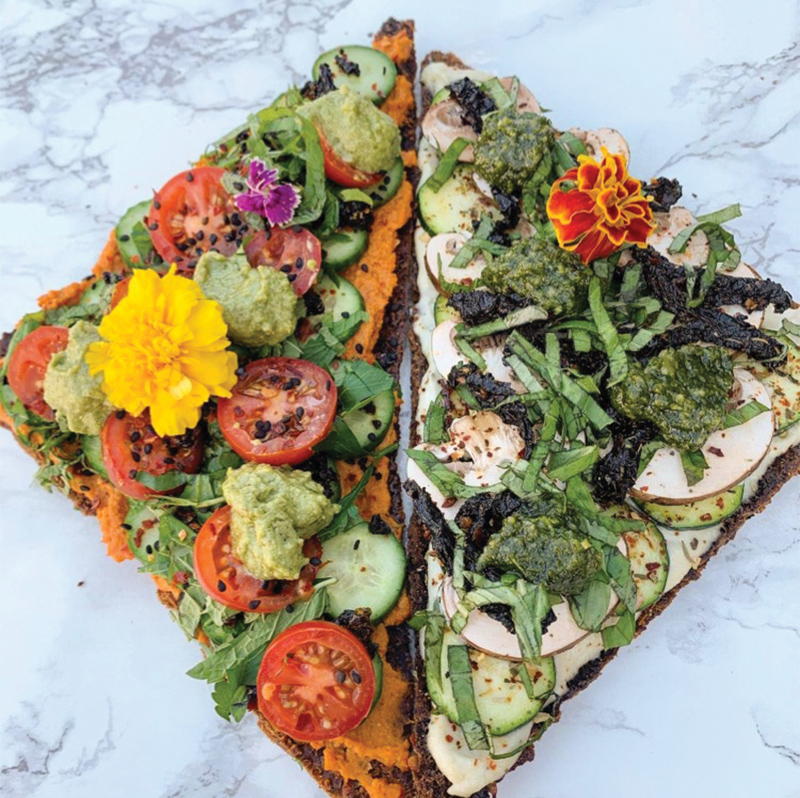 Chef Jason Neroni first encountered Tokyo-style pizza last year at Savoy, the Italian restaurant in Japan. Most memorable was a bluefin tuna and corn puree pizza topped with grated wasabi, which inspired him to begin experimenting more with Asian ingredients atop his pizzas back home at The Rose in Venice, California. His newest creation and current bestseller is the over-the-top Godzilla, a pizza in the style of okonomiyaki with green garlic sausage, pepperoni and bacon flavored with oyster sauce, miso aioli and finished with a shower of bonito flakes. 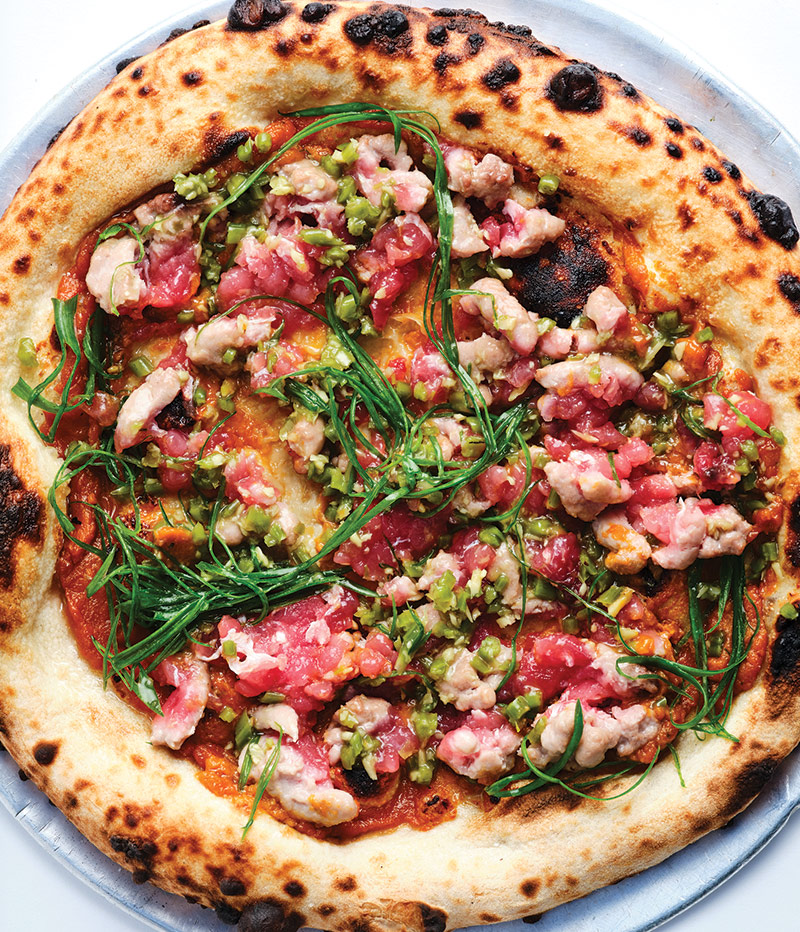 “I’ve always had a proclivity for Asian flavors and cooking Italian food, so why not mash them together?” he says. While the pizza he tried in Japan was similar to a Neapolitan-style dough, Neroni prefers more structure to his pizza, so he adds baker’s flour for a sturdier texture, which holds up to heartier toppings.

“I don’t like doughy pizzas and I firmly believe that you should be able to pick a pizza up and eat it without the ingredients falling off,” he says. He’s still working on the dough for his forthcoming pizzeria, which will be themed like a Tokyo pizzeria with neon rock ‘n’ roll vibes.

Gallo also has his share of untraditional toppings on his pinsa. For the Mortazza pinsa, he begins with a fior di latte base and a pistachio emulsion. It’s then topped with mortadella and crunchy pistachios for contrast and texture. Vegan pinsa is also represented: creamy rice mozzarella and vegan prosciutto made from legume flour that’s imported from Italy.

Pie For All Palates 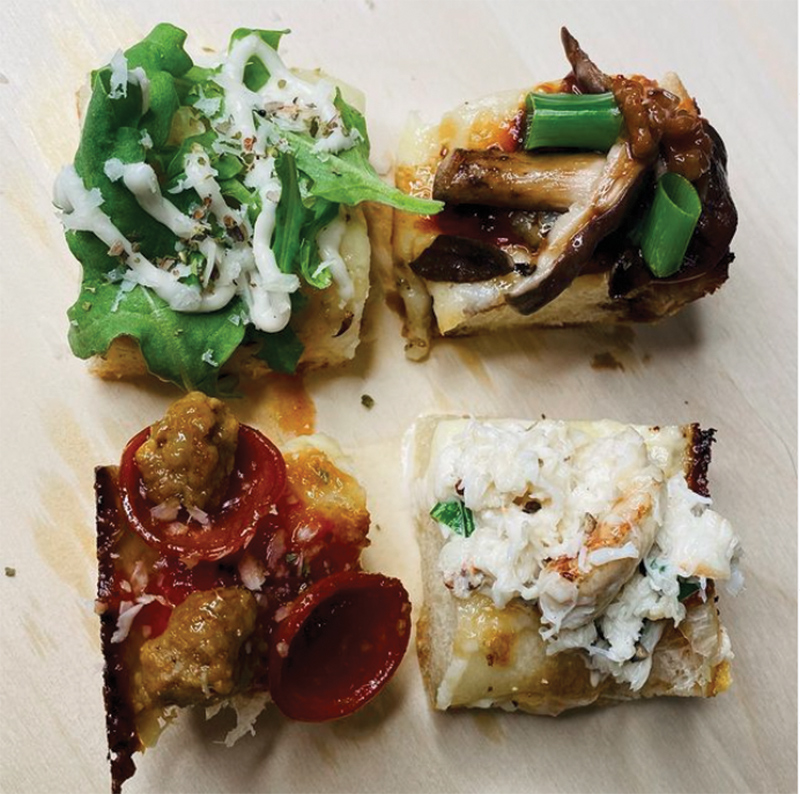 Gluten-free and paleo options are increasingly the norm, often playing off of the strength of ingredients and venturing beyond a low-carb or gluten-free crust.

Housemade cashew mozzarella has led Purgatory in Los Angeles to hone in on the crowd reducing dairy as a lifestyle choice. The menu features combinations such as housemade barbecue sauce, braised jackfruit, red onion and grilled pineapple as well as buffalo cream sauce, marinated cauliflower, red onion, scallions and red pepper flakes as well as a version with a garlic and olive oil base, almond ricotta, sesame seed crust, black pepper and almond parmesan.

“What we’ve noticed is that people just want healthier and they want their pizza,” says Alex Koons, who works on the Purgatory menu. “We can satisfy both.”

STRETCHING CREATIVITY: THE LATEST ON PIZZA

Style: Modernist chef Wylie Dufresne of WD-50 taught himself how to make pizza during the pandemic after rediscovering a pizza oven in his basement. He teamed up with longtime friend Jean-George Vongerichten to open Stretch, an indefinite popup at Breads Bakery that sells only takeout by reservation.

Examples: Everything Bagel Pizza with a thin layer of cream cheese, mozzarella, chives and everything bagel spice. 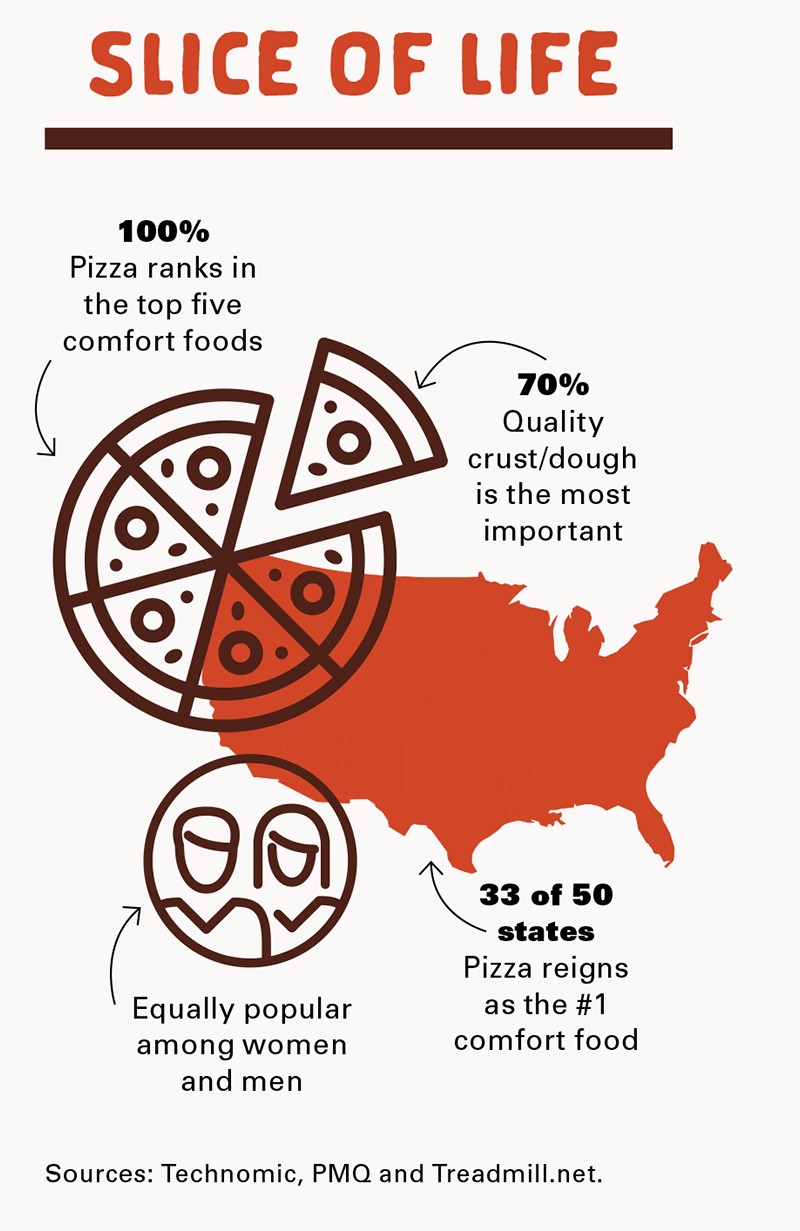