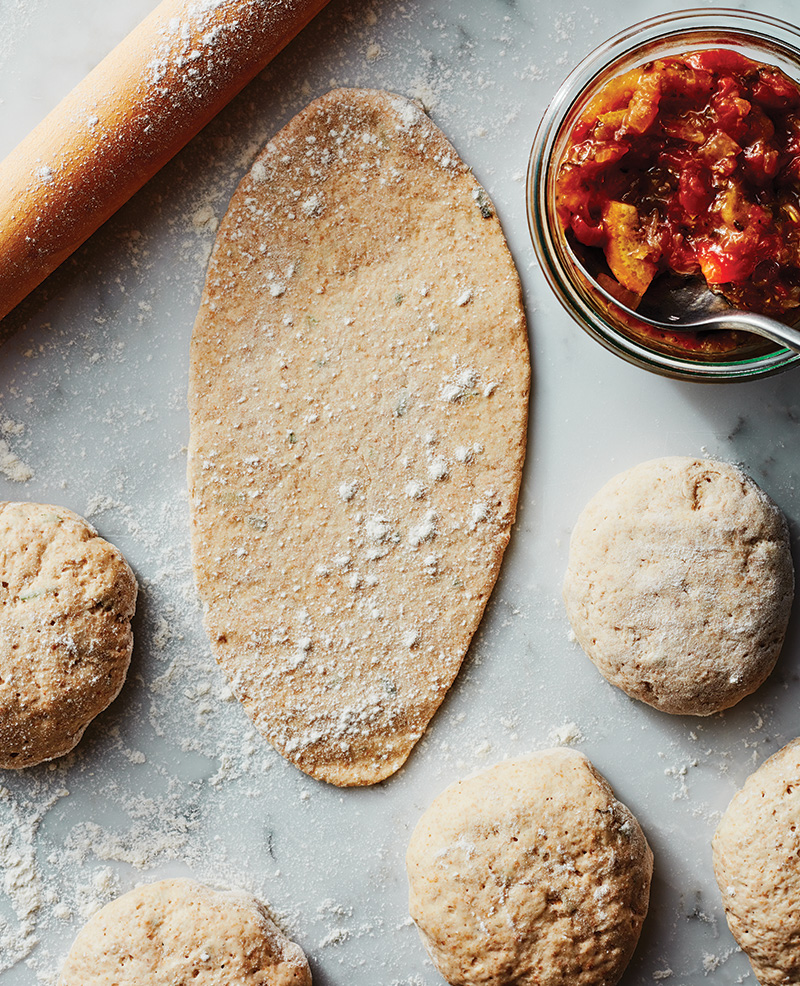 Carbohydrate-dense foods are getting a new life. But like all things banished by diet crazes that return to the fold, they don’t look the same.

Pasta and bread, ostracized by the popularity of low-carb diets and branded as nutritionally inferior, are cutting their carbohydrate load while bulking up on high-protein grains. Pasta made in-house with farro or quinoa, bread fortified with spelt and kamut as well as non-wheat noodles are appearing more often, substantiating the National Restaurant Association’s 2019 forecast on top trends. In addition, better-for-you grains can be fermented, adding new depths of flavor.

Diners, chefs say, get excited when they see pasta and bread that’s unique and different. While 45% of Americans say they would order healthier options, 40% see dining out as a treat and order what they want regardless of health, according to research firm Technomic. Sophisticated pasta and bread programs, which are becoming more prevalent, satisfy both: diners following specialty diets, such as keto or paleo, and everyone else – cheat day or not.

Diners at Steadfast in Chicago are apparently flipping off the low-carb trend: nearly 90% of tables order Pastry Chef Chris Teixeira’s high-profit-margin bread board. For $12, they get six specialty breads, three housemade butters, three infused oils and three types of pickles.

Since Teixeira oversees a bakery operation that’s under the same umbrella as Steadfast, The Fifty/50 Group’s West Town Bakery, he has the economies of scale to experiment for the bread board. The latest types include purple potato bread that’s as soft as a steamed bao bun, a subtly floral lavender pretzel and a fermented oat bread. They accompany oils such as garlic saffron and herb as well as compound butters, like giardiniera and port wine. 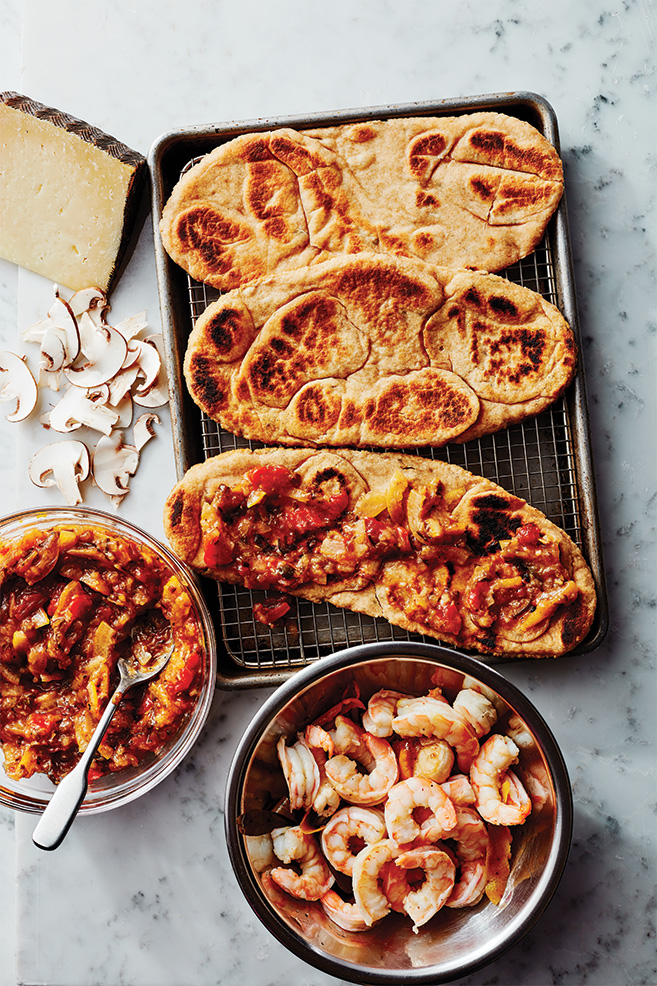 Bobby Schaffer’s fine dining background as a pastry chef inspires Lost Larson, his neighborhood bakery-cafe in Chicago. Customers can watch workers milling flour while staff share information on the benefits of baked goods made with organic whole grains and freshly milled flour, including how his fermented grains can make bread easier to digest. It’s the kind of experience that enhances the eye-catching menu and creates a social media following.

Sandwiches are prepared in the Scandinavian style, served open face on a slice of bread. Options include lingonberry jam, radish and dill on rye or a ’nduja gianduja with pumpkin seeds, ricotta and poached egg on pumpkin seed kelp bread.

His handmade pastas often rely on nutty spelt and spicy rye. The spiciness of rye, he says, complements wintery flavors, such as squash and bulkier butter sauces. Plus, the rye semolina dough produces a soft and silky texture that’s not as chewy as other flours, making it a more pleasurable texture.

Beholder in Indianapolis also sees the draw and benefit of cutting carbs from traditional breads. Chef/Owner Jonathan Brooks makes a naan-style bread by fermenting, dehydrating and then grinding red fife wheat berries into flour. It’s combined with spelt to make a dough that’s grilled and topped with pink shrimp confit and tomato-chili marmalade. “The bright, spicy, acidic marmalade is what ties the ingredients together and makes this dish work,” Brooks says.

“I do think that people trying to avoid traditional carbs are more inclined to order something like this,” he says. “I am wonderfully surprised that most times our more esoteric menu items are some of the best sellers.” 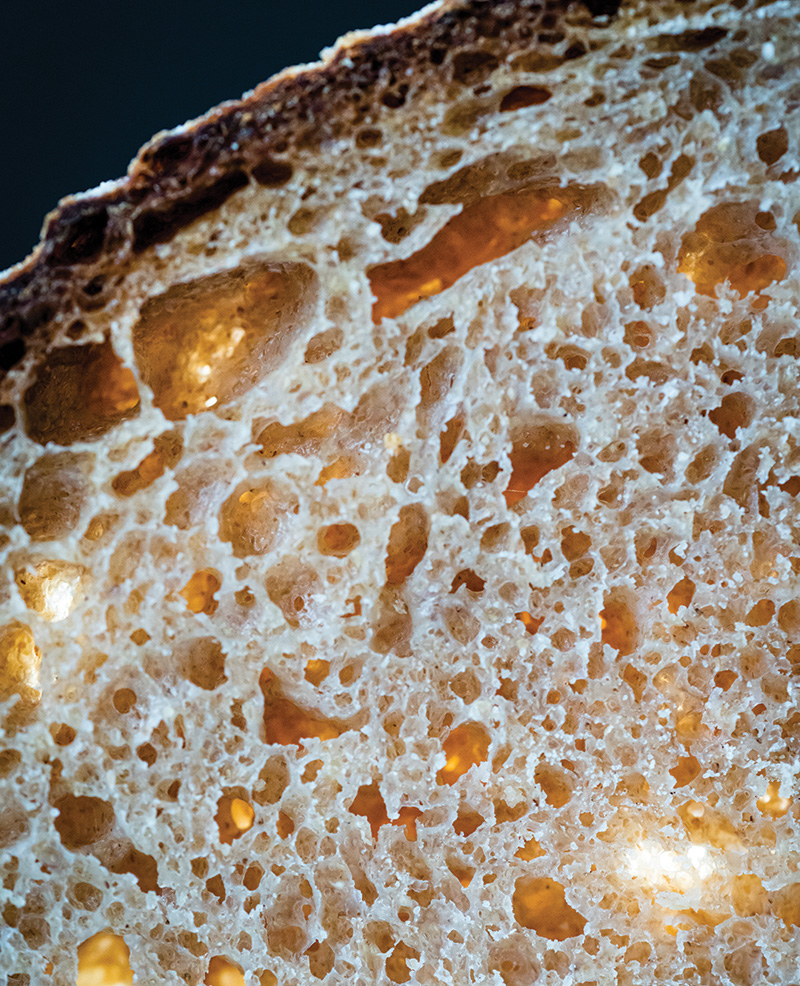 With Saba in New Orleans, and most recently, Safta in Denver, Chef-Owner Alon Shaya has built two modern Israeli concepts anchored by wood-fired pita made to order. Hot and puffy housemade bread is a star at many other concepts, such as Bavel in Los Angeles and Falafel Salam in Seattle.

Three for $21 or five for $35 salatim “salads” offered at Saba and Safta include koosa (zucchini, yogurt, sunflower and mint) and lutenitsa (roasted eggplant, peppers, tomato and garlic), and don’t
need to be eaten with the accompanying hot out-of-the-oven pita. But it’s common that guests request extra ones. Same for the $10 to $20 hummus options, such as Brussels sprouts, spicy chilies, caramelized onion and black garlic; and soft-cooked egg, grilled scallion, za’atar and mint.

At lunch, entrée salads aren’t a focus, but sandwiches get play at Saba and Safta. Pita wraps around ingredients such as amba labneh, grated tomato and herbs for chicken malawach and matbucha and za’atar for Bulgarian lamb kebab. “I love layering lots of flavors on top of a piece of pita,” Shaya says.

NO VEGGING FOR VEGETABLES

If the crowds are any indication, gluten watchers will pay extra to swap out noodles for lower-carb but vegetable-based alternatives. At Boke Bowl in Portland, Oregon, Chef Patrick Fleming charges $3 to substitute shirataki noodles for traditional noodles or rice. The thin, translucent sweet potato noodles are made from the konjac yam imported from Japan. “They are soft and have less bite to them than traditional ramen noodles; they’re more like glass noodles,” Fleming says. “We have a lot of health-conscious diners who come in for a salad but end up with a ramen bowl because of the availability of the yam noodles.”

For pizza, quinoa – with its high-carb, high-protein profile – is giving cauliflower competition as a base for alternative pizza crusts, especially among those looking for an extra boost for an active lifestyle.

At PharmTable in San Antonio, Chef Elizabeth Johnson’s kale pizza with tomato cashew sauce is served on a quinoa crust made with almond flour instead of prized Italian 00 flour. “The crust is a flat dough –  flexible, soft and very filling,” Johnson says. “It feels more substantial than a cauliflower crust.”

Johnson wanted to develop a grain-free crust with complete proteins, so she cross-utilized an ingredient used in her tamales to lower costs. “We sell a lot of meat, because this is Texas,” Johnson says. “But the beauty of this pizza is that there is no need for meat because the quinoa provides a complete amino protein.”

ALL SHAPES AND SIZES

Specialty diets – starting with Atkins in the 90s and most recently with Whole 30 – have singlehandedly altered menus across dayparts and concepts. Some operators say pasta entrees have taken the biggest hit, while others argue that pasta eaters live in the closet. Regardless, chefs are making room in their housemade pasta programs for high-protein grains and more vegetables.

The handmade pasta at Fox & the Knife in Boston is a standout on an already impressive menu, evidenced by early accolades including designation as a 2019 best new restaurant from Eater after opening a few months earlier.

Saffron is infused into the pasta dough for Chef Karen Akunowicz’s take on spaghetti and clams, resonating with a clean, distinct scent of the ocean. The least likely star, however, is the mafaldini made with toasted farro. Its nutty flavor paired with mushrooms and truffle butter exemplifies simplicity.