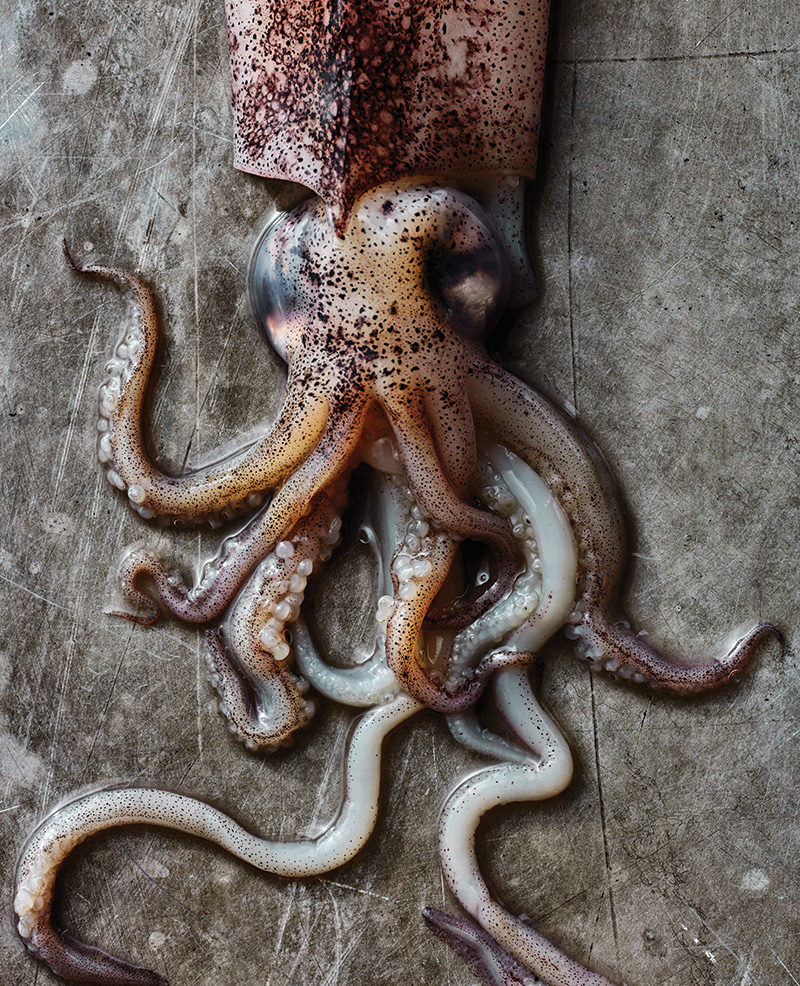 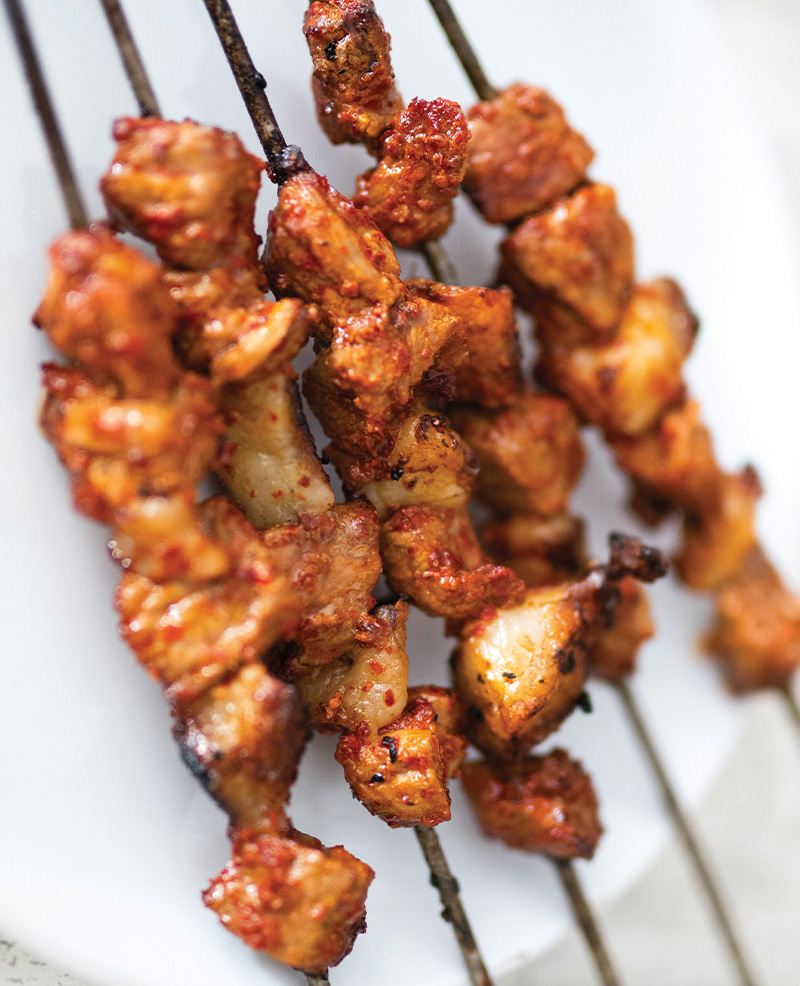 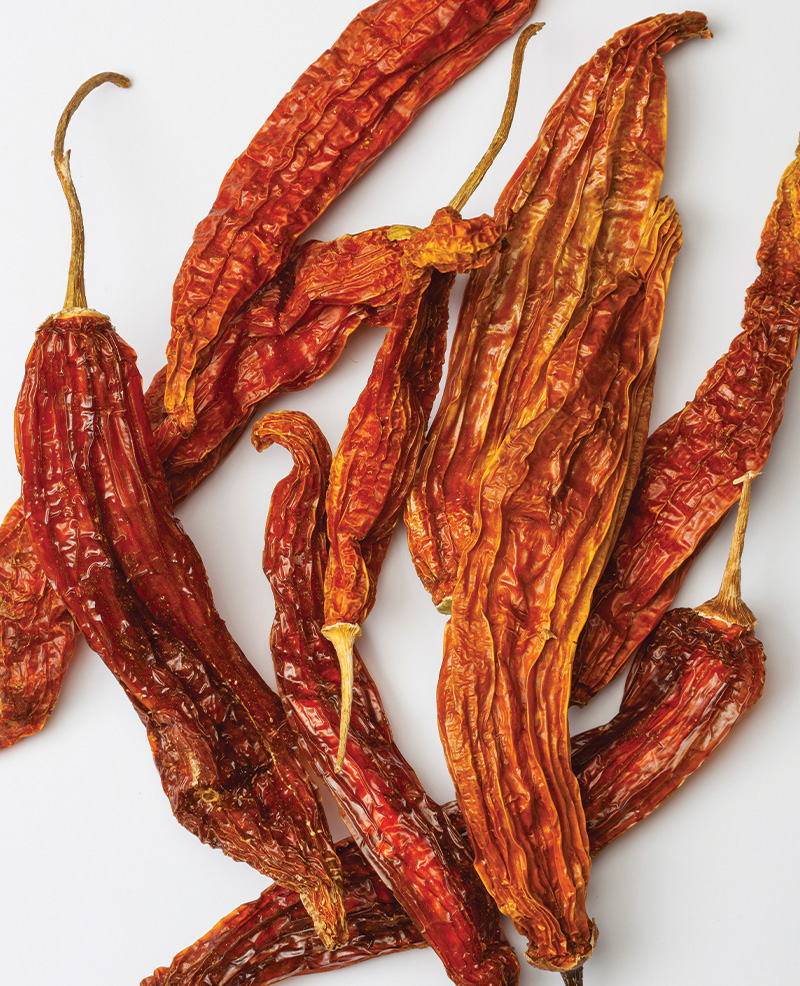 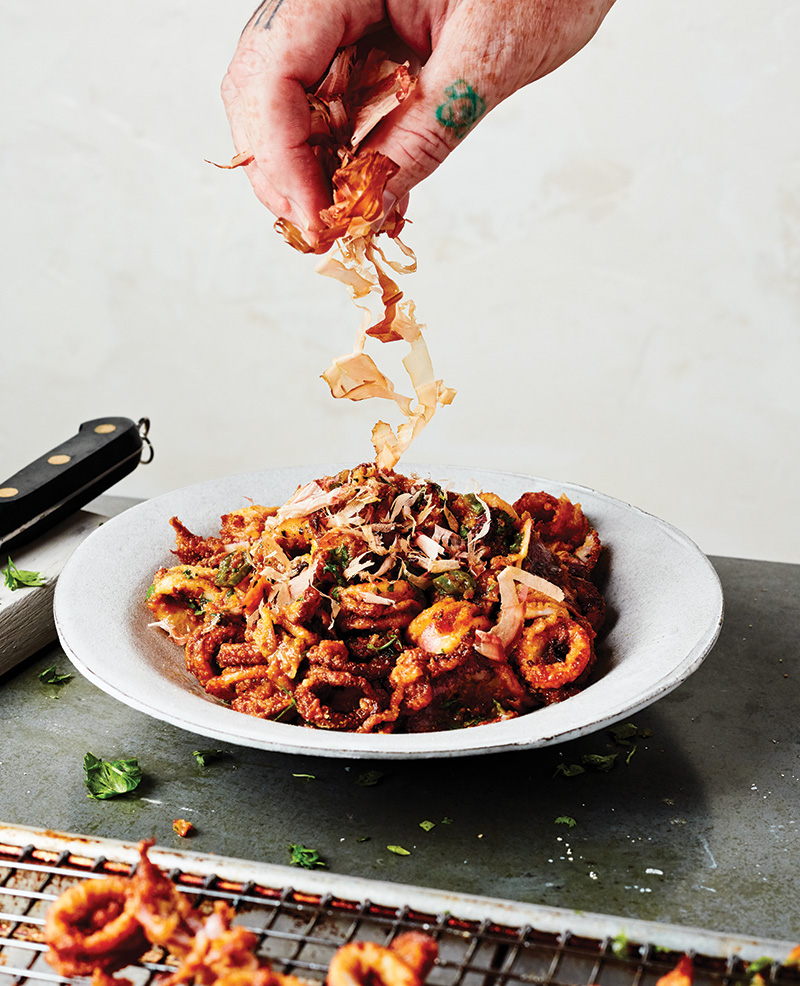 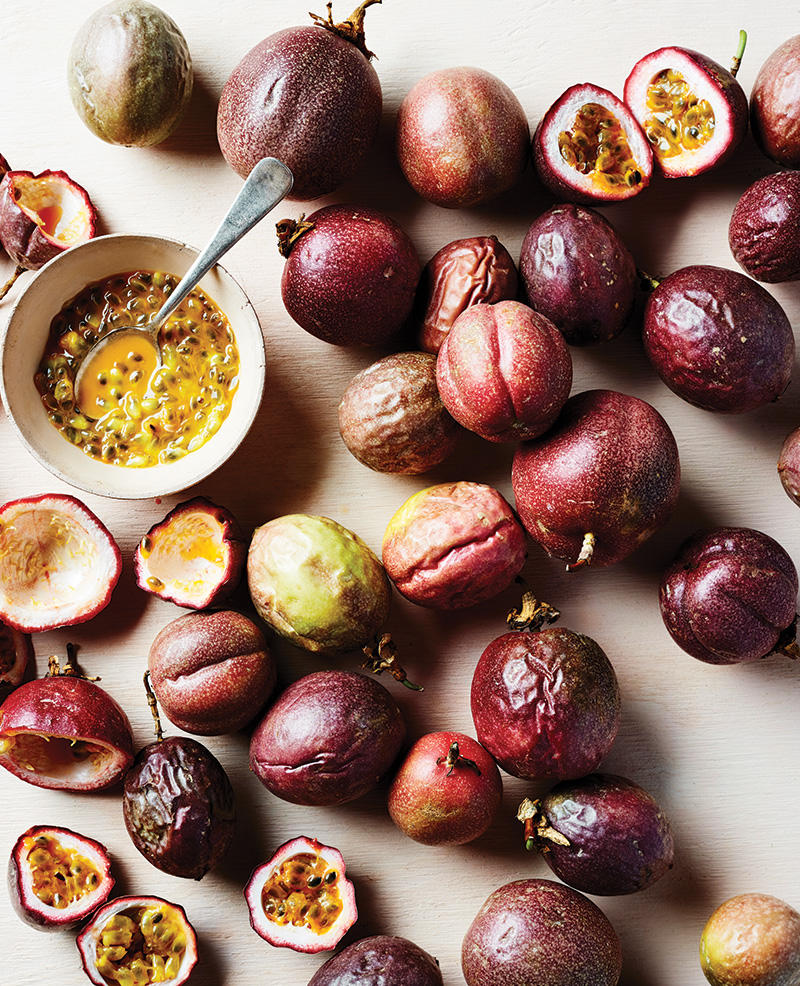 The Peruvian table is set with flavors that American diners are already familiar with: smoky, fruit-forward peppers, richly spiced hams and sausages and citrusy marinades.

“That’s what makes Peruvian food so approachable – it doesn’t feel foreign to most people,” says Peter Platt, the owner of Andina in Portland, Oregon.

With a foundation of familiar tastes in place, borrowing from the Peruvian pantry gives riffing a head start. According to the research firm Technomic, 53% of diners say they haven’t tried Peruvian fare but would like to, making now the time to join the Peruvian revolution. 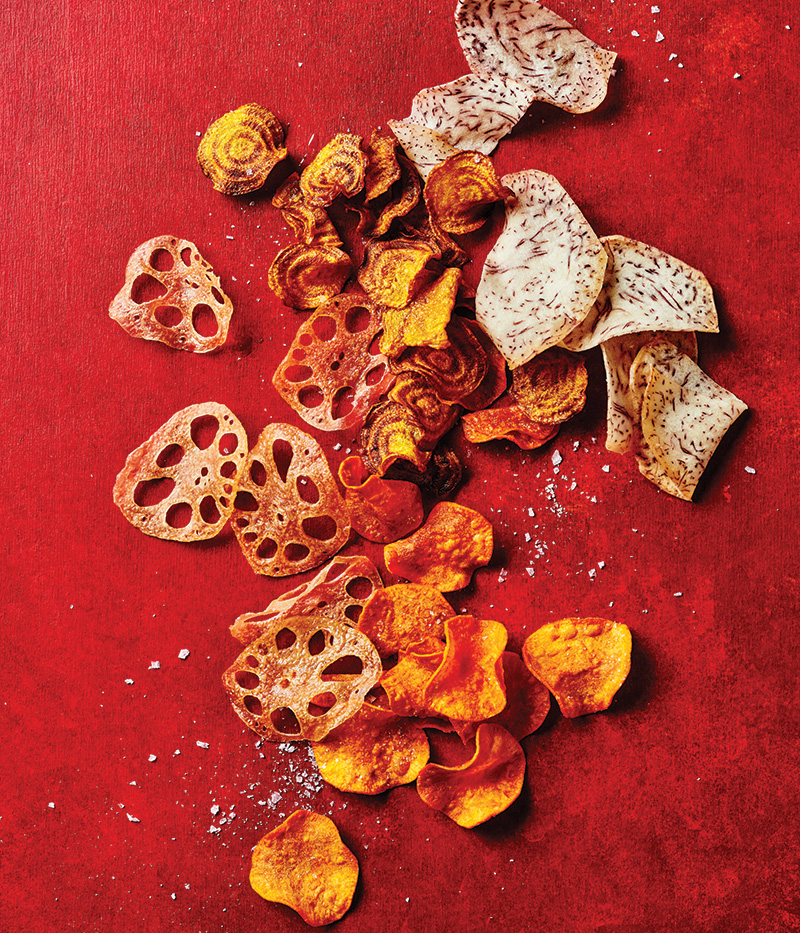 His play on a classic butifarra includes jamon del pais (a Peruvian country ham rubbed with annatto oil) and salsa criolla (peppery onion relish) plus a honeyed twist: sweet potatoes. Ramirez also offers
a Peruvian breakfast biscuit layered with fontina, egg and huacho sausage made from pork shoulder fatback and aji panca peppers. “Peruvian food was developed mostly by poor people,” says Ramirez, “so don’t be afraid to use off cuts. If you can execute them, they can be really profitable.”

At the Pan-Latin TORO Kitchen in Snowmass Village, Colorado, mountain-inspired Peruvian comfort foods are trending, in part because skiers will spring for carb-heavy dishes they’ve never encountered. Chef Jay McCarthy sticks with the staples, but leans on his saucing skills. “Everyone wants unadulterated foods and clean flavors,” he says. “And that’s precisely what Peruvian cooking provides.” His Cusco chicken and potatoes is draped in a huancaina sauce (a Peruvian fondue made with panella cheese, evaporated milk and saltine crackers), while his poached Spanish octopus is topped with three colorful sauces – an aji amarillo vinaigrette, a peanut-habanero sauce and cilantro purée. “Peruvian peppers work well in the winter months,” he says. “If you cook them right, it’s like roasting peppers instead of chestnuts over the open fire.”

In Peru, restaurants fill the normally fallow period between lunch and dinner with lonche offerings (“too late for lunch, too early for dinner”).

Miguel Montoya and his wife, Iole Revilla, of Panca in Oceanside, California, found they also click with busy professionals and time-strapped flyers heading to the airport. They offer Peruvian leek tarts and stuffed quinoa cakes but found the most success with empanadas. Dusted with powdered sugar, they’re stuffed with meats usually served as entrees, like aji de cordero (a Parmesan chicken in a pepper sauce) and seco de cordero (cilantro lamb stew with carrots, peas and potato). Since fillings are already made for dinner, the empanadas are especially profitable. “Lonche is built for people who live a much faster lifestyle,” says Montoya. “They want something to eat on the run but want it to be homemade, not another Big Mac.” 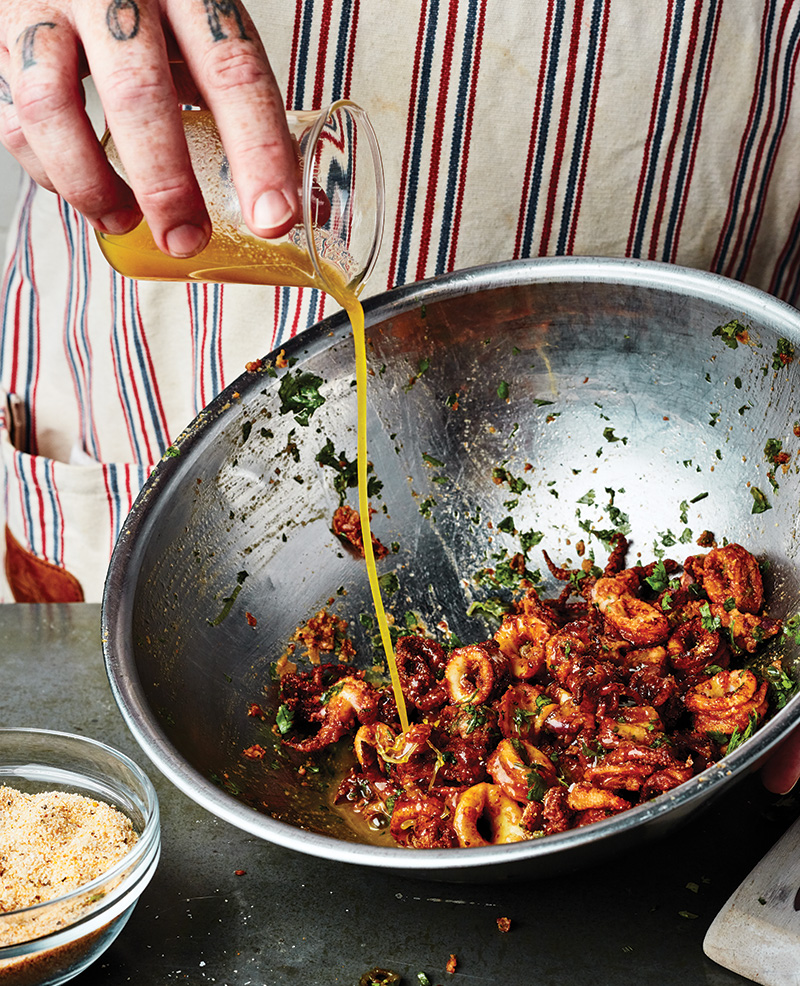 “The cider gives the dishes a bit of sweetness – almost like a vanilla flavor,” he says. He converted a classic a chupado soup made with river prawns, rice, egg and Peruvian black mint into a dry powder, sprinkling it over bucatini along with Peruvian pesto, queso fresco and a tomato-based aji panca sauce. The unbridled novelty of these dishes makes them bestsellers, even at $33 for the pasta and $59 for the short rib.

“Peruvian food is so versatile,” says Chef Tom Berry of Ruka in Boston. “You can easily keep the spirit of the dish while adding your own local touch.”

For years, Nikkei-style cuisine – which applies Japanese techniques to Peruvian ingredients – was unheard of outside of Peru. That changed when Nikkei concepts started landing in New York and California over the last few years.

TIRADITOS / Think of a tiradito as a marinated sashimi that’s been blasted with South American flavors. At Kaiyo in San Francisco, chef Michelle Matthews laces scallops in a passionfruit leche de tigre sauce and a sweet potato purée, and offers ceviches with different dipping sauces, including spicy aji rocoto and guava, and a nut milk with dashi.

ANTICUCHO / Skewers are gently roasted on a robata grill over Japanese binchon coals as they
are in Japan, but Chef Mina Newman of Sen Sakana in New York wraps proteins around cremoso cheese (similar in texture to mozzarella) or marinated tomatoes.

STREET FOOD / At Ruka in Boston, Chef Tom Berry integrates East Coast staples with Peruvian street food. All it takes, he says, is one familiar element to draw diners into the unknown. His salchipapas smashes together Boston hot dogs with sauced togarashi french fries, while his Lima-style calamari is crowned with a garlicky leche de tigre sauce and hot peppers in a Nikkei play on Rhode Island-style calamari.

If you offer these items, try the Peruvian versions to differentiate your menu.