Branzino, the flaky, mild, ideal-sized, widely appealing fish has been riding a wave of popularity for the last few years. Reasonably priced and most often served whole, the fish is missing only one attribute: It’s not wild.

That’s because nearly all branzino consumed in the U.S. is farm-raised. As seafood prices are more likely to rise than fall, and sustainability is more important than ever, farmed seafood is getting respect from diners and chefs.

It’s more environmentally friendly, thanks to better advancements in aquaculture and land-based closed-loop farming that consumes fewer natural resources, and generates less pollution by raising plants and fish in a symbiotic ecosystem. Farmed seafood also isn’t handcuffed to a season. 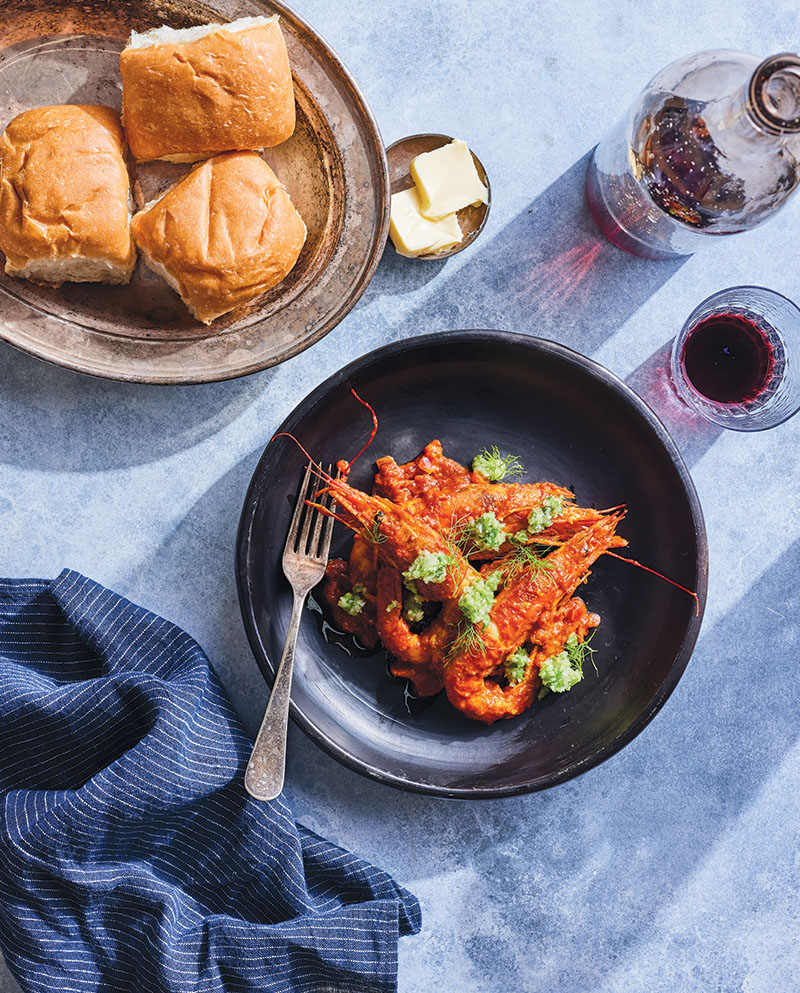 “I believe people always want to hear that their fish is wild, but when you explain to them why you are using farmed, they feel good about it,” says New York-based chef Bryce Shuman. He’s been purchasing farmed branzino since he worked at Eleven Madison Park, and will continue using the fish at his new project, Sweetbriar. For Shuman, farmed branzino is the obvious choice when wild branzino is widely over-fished, not as consistently available, cost three or four times as much, and is on the Marine Stewardship Council’s avoid list. “Price and quality drive my purchasing decisions,” he says.

Chef William Dissen at The Market Place Restaurant in Asheville, North Carolina, also has met diners who have misconceptions about farmed seafood: that it’s raised like commodity chicken in tight pens and poor living conditions, and pumped full of antibiotics. 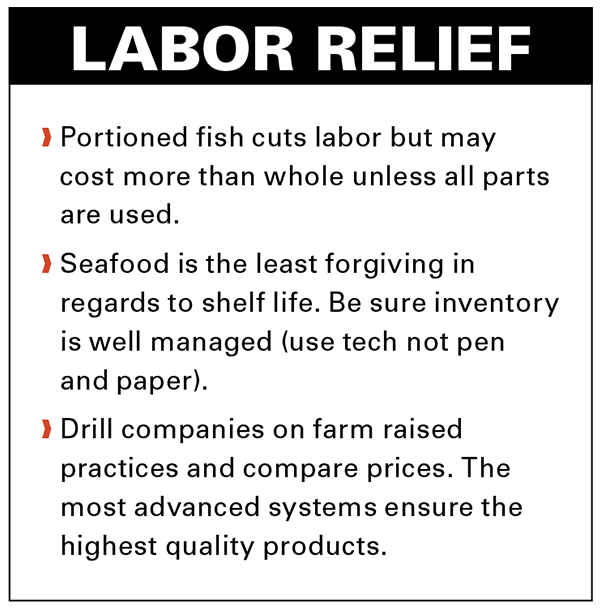 “There have been a lot of poor farming practices with species like Atlantic salmon,” Dissen says. “On the flip side, there are many highly sustainable farmed seafood species like oysters and clams.” Dissen has been working with Sunburst Trout Farm in Canton, North Carolina, for more than a dozen years and credits the crystal-clear, ice-cold water from Shining Rock Wilderness for the trout’s sweet flavor. “This is some of the best farmed trout on the planet,” he says. 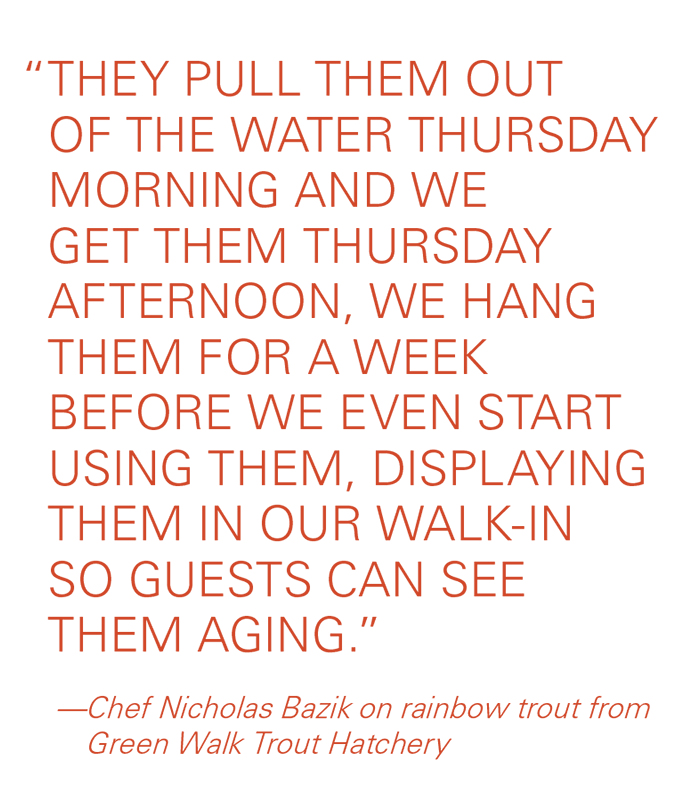 “Bangs Island mussels are larger, sweeter and much firmer texture than your standard Prince Edward Island mussels,” Bazik says. They’re available year-round, so he always has mussels on the menu, but updates the accompaniments according to what’s in season, transitioning from a mussel escabeche with cantaloupe, sherry gastrique and dried chili peanuts in summer, to a pickled mussel tartine with marinated pumpkin, pumpkin seed aioli and toasted pumpkin seeds in the winter.

The rainbow trout that Bazik receives from Green Walk Trout Hatchery are so fresh that they are still in rigor mortis. “They pull them out of the water Thursday morning, and we get them Thursday afternoon,” he says. “We hang them for a week before we even start using them, displaying them in our walk-in so guests can see them aging.” Bazik orders 14- to 16-inch trout so he can portion three fillets from each fish. Aging the trout for a week gives the fish a softer texture and dries out the skin, so it’s crispier when cooked. The price he’s paying might be more than larger trout fisheries in Idaho, but to Bazik, the integrity of the product, buying directly from a local hatchery and doing what’s better for the planet are worth it. Plus, he hasn’t faced the same price spikes as with other commodities this past year. The smoked trout bodies also make a great fumet, which is used throughout many other dishes.

Even if local aquaculture options are not available, if sustainability is important, it’s easy to check the credentials of farmed fish against sustainable seafood advisory lists like Monterey Bay Aquarium Seafood Watch and the Marine Stewardship Council. Last year, there were more than 18,000 MSC certified sustainable products available worldwide.

Specific species on the Seafood Watch app or website can be searched for ratings, from “best choice” and “certified” to “good alternative” or “avoid.” 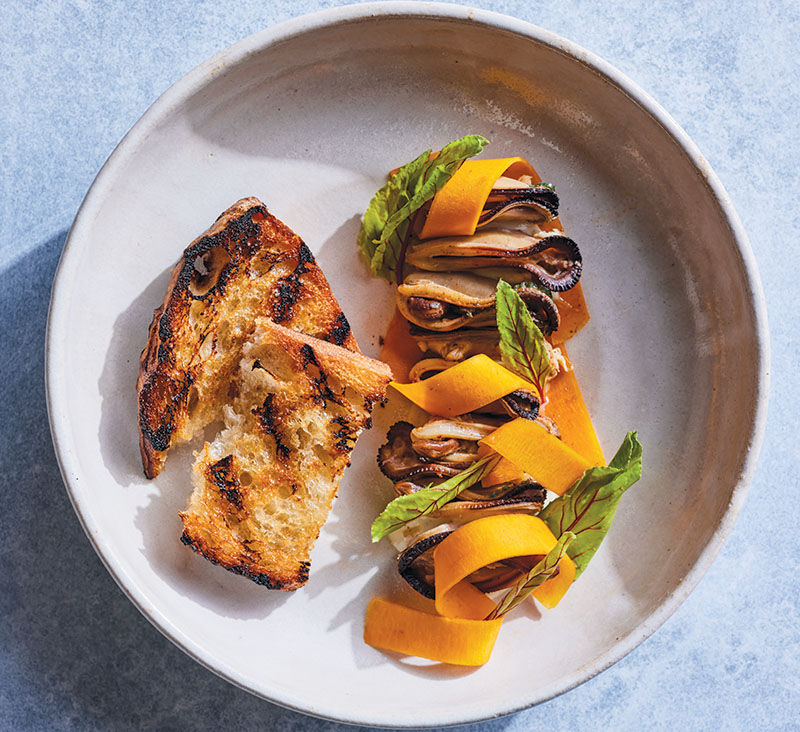 Even top sushi chefs are turning to farmed fish for species like Spanish bluefin tuna, Japanese snapper and ocean trout. Chef Otto Phan still sticks to wild-caught fish only for Kyoten in Chicago, where omakase menus are $500 per person. However, at Hinoki Sushiko, his larger and less expensive restaurant, Phan uses Ora King salmon, Petuna ocean trout from Tasmania, and Pequot sablefish farmed in Canada. As for the prized bluefin tuna, his auction-grade tuna from Toyosu market is around $200 per pound, compared to $35 per pound for farmed bluefin tuna from Spain.

“It takes an experienced palate to tell the difference between wild and farmed,” he says. “The future of fish is surely farmed, especially when taking into consideration value and freshness.”

Just because farmed seafood is more affordable, available year-round and more consistently available and better for the environment when raised properly, doesn’t mean wild should be shunned.

Wild seafood fetches top dollar, and its FOMO status brings in customers and drives sales. Just be sure to sufficiently promote it, and manage waste and food costs. 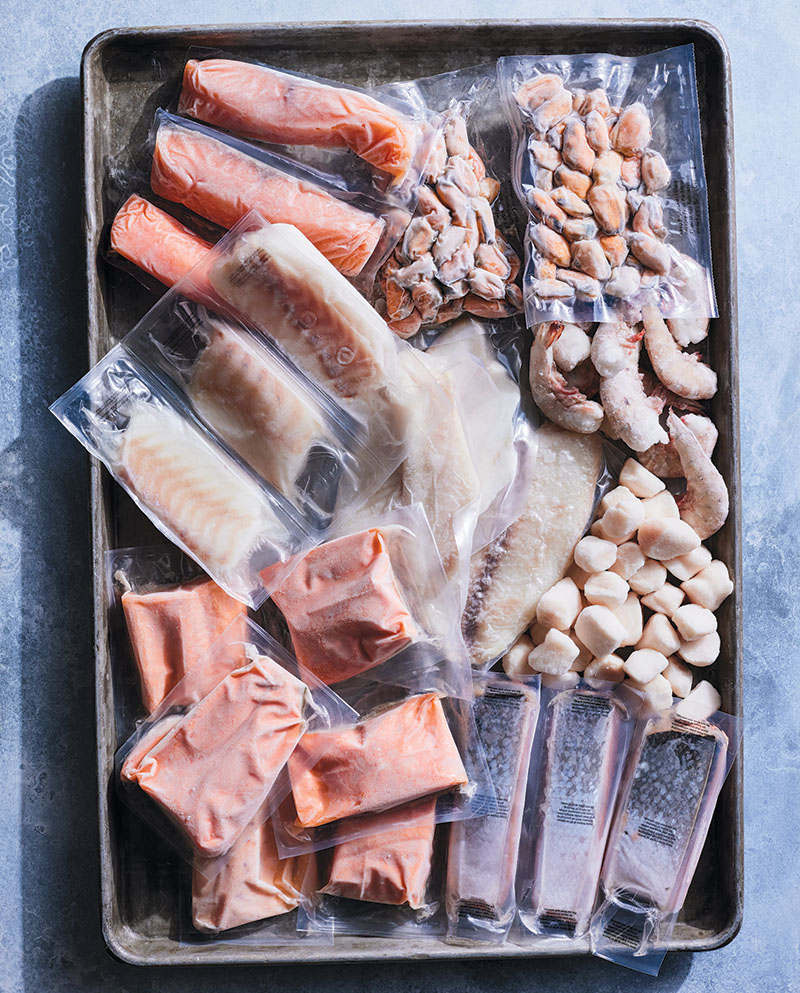 Subbing seafood is so 80s

Chef Sujan Sukar of Baar uses farmed prawns from Ecuador that are quick-frozen and cost less than half of what fresh wild-caught prawns would cost. “The consistency of the frozen farmed prawns is much better because of the micromanagement supervision,” he says. “It’s difficult to differentiate between wild and frozen farmed in a blind taste test.”