When the Texan sparkling water brand Topo Chico announced a partnership with Molson Coors to break into the hard seltzer market, the consumer response was immediate. According to market research firm IRI, in the first four weeks after launch earlier this year, it racked up $6.2 million in sales and secured 3.1% of the booming national hard seltzer market. 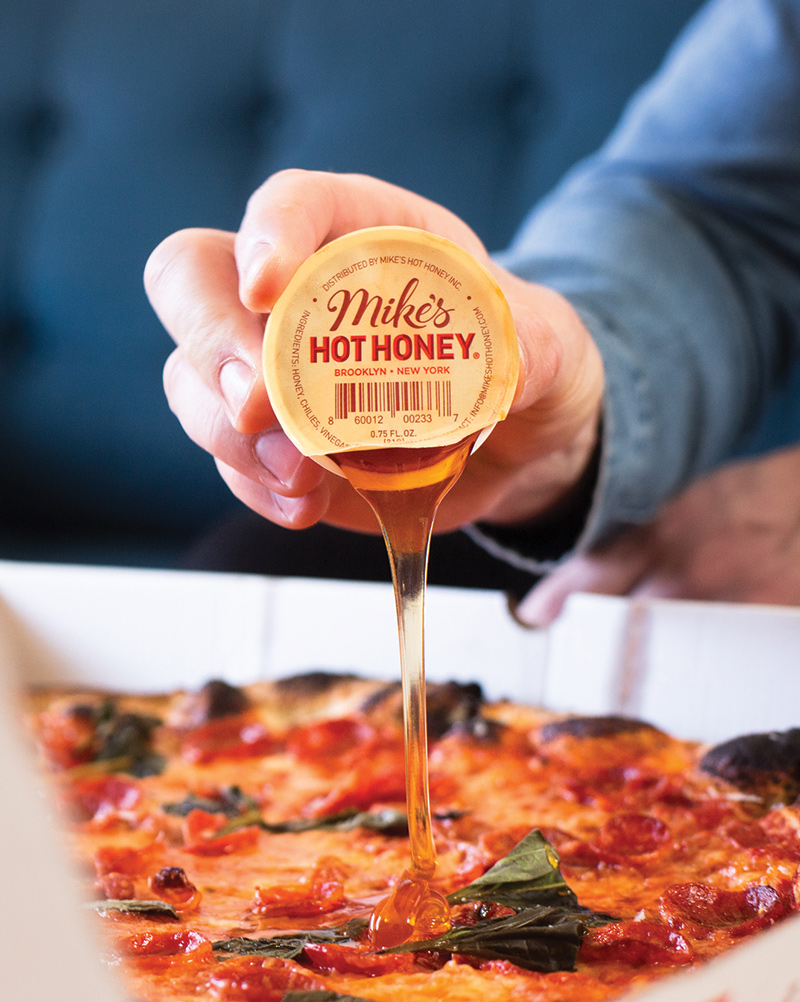 Topo Chico is far from the first label to capitalize on its branding power in the beverage space. From Harpoon Brewery’s annual Dunkin’ Donuts-branded Dunkin’ Coffee Porter, which comes in cans decorated with the East Coast chain’s design, to Yuengling Brewery’s Hershey’s Chocolate Porter, plenty of breweries have leveraged brand recognition for hype.

While restaurants have traditionally been less inclined to lean on big-name brands, an increasing number are doing so – with impressive results. With the meteoric rise of delivery apps during the pandemic, restaurant owners can no longer rely on a trendy location or eye-catching interior design to lure new customers. Familiar brand names with robust followings can help a restaurant’s menu stand out on Caviar, Grubhub and Uber Eats. When choosing which brands to place on a menu, however, it’s important to be selective. By aligning themselves with brands that embody the restaurant’s ethos, chefs and owners can strengthen their image and boost business.

Avocaderia partnered with Impossible because their ethos align.

For Paul Giannone, owner of the Brooklyn-based pizzeria Paulie Gee’s, bolstering a local brand helped raise the profile of his whole business. In 2010, when Giannone first met Mike Kurtz, the young entrepreneur was trying to sell his new chili-infused honey at a neighborhood market. After Kurtz started picking up shifts at the pizzeria, Giannone allowed him to hone his product in the restaurant’s kitchen. A few trial batches later, Mike’s Hot Honey ended up on the menu and the rest is history.

“We put Mike’s Hot Honey on a pie called the ‘Hellboy’ and it became a cult favorite,” Giannone says. “It wasn’t long before we were selling twice as many of those pies as any other.”

Fast forward a decade and Mike’s Hot Honey is a household name with shelf space in Whole Foods and other high-end retailers around the country. It also appears at Paulie Gee’s pizzerias in New York, Baltimore, Chicago, New Orleans and Columbus, Ohio, on multiple pies. At one point, Giannone even had a special ice cream sundae drizzled with Mike’s Hot Honey on the dessert menu.

“We definitely helped each other out,” Giannone says.

“WE PUT MIKE’S HOT HONEY ON A PIE CALLED THE ‘HELLBOY’ AND IT BECAME A CULT FAVORITE. IT WASN’T LONG BEFORE WE WERE SELLING TWICE AS MANY OF THOSE PIES AS ANY OTHER.”

Another New York restaurant that proudly lists Mike’s Hot Honey on the menu is Harlem Shake, a retro burger joint. Not long after the restaurant opened, chef and journalist J. Kenji López-Alt threw a pop-up event featuring a double-fried dark meat chicken sandwich drizzled in Mike’s Hot Honey. Jelena Pasic, Harlem Shake founder and CEO, decided to keep the sandwich on the menu permanently, because of the taste and because the concept’s brand identity is rooted in its local surroundings.

From the Blue Marble ice cream in the milkshakes to the Mama’s One Sauce on another fried chicken sandwich, Pasic strives to highlight brands by local food entrepreneurs like herself. Vy “Mama” Higginsen is the force of nature behind the Mama Foundation for the Performing Arts, which teaches gospel, jazz and R&B vocals to local youth, and a portion of all sales from Mama’s One Sauce go toward the foundation. Pasic had been friends with Higginsen for years and felt that the partnership was a win-win – she could support a product that she believed in on her restaurant menu, while at the same time emphasizing Harlem Shake’s ties to the community.

“Mama Higginsen is a local matron in Harlem because she brought so many children into gospel singing,” Pasic says. She is quick to point out that she would never showcase a brand if she did not believe in the quality of the product. For the smash burgers at Harlem Shake, for instance, she knew she needed richly flavored beef that had never been frozen to attain the desired crispy exteriors, but she didn’t want a brand that would force her to charge $25 to turn a profit.

“I envisioned a simple approach, but with top-quality ingredients,” Pasic says. In the end, she opted for a well-known brand found at steakhouses across Manhattan. “We didn’t want to use organic beef or anything that would be prohibitive price-wise for our neighborhood of Harlem. We decided to use Pat LaFrieda because that’s a butcher where you know you’re getting good quality meat.”

Alessandro Biggi, founder of Avocaderia, a fast-casual restaurant in Brooklyn, also thinks that quality has to carry just as much weight as a brand’s name recognition. When he was looking for a meat alternative, he and his staff conducted a taste test before settling on Impossible Foods. The faux-beef now appears as meatballs in a branded Impossi-Bowl and in the vegan chorizo Impossible Tacos. So far, both items have been a success.

“It’s not our top seller, but it definitely performs very well, especially on delivery,” Biggi says. “It’s difficult to prove, of course, but I think it’s likely that people see those items on our menu, connect it to the Impossible Burger, and are more inclined to buy that product.”

Given the media frenzy surrounding the Impossible Burger since 2019, the brand carries serious clout. For Biggi, it also felt like a good match for Avocaderia because it aligned with the health-conscious, environmentally conscious values that he associates with his restaurant. “We really admired the vision of Impossible as a company,” Biggi says. “They’re having a big impact on sustainability and reducing our carbon footprint, which I believe is really important.”

Ultimately, the brands that a restaurant features on its menu are an extension of its own. If a brand mirrors a restaurant’s reputation and projected values, it can help cement those concepts in the minds of prospective customers. While it might be tempting for owners to reach for whatever products are trending at the moment, the best long-term strategy is to find ones that fit organically into a broader identity.

PAIRING UP: WHAT TO LOOK FOR