On the verge of burning out from 80-to-90 hour work weeks in New York City, Shuai Wang and his wife, Corrie, had to get out of Dodge.

Shuai had been chef de cuisine for four years at Chez Sardine (now Bar Sardine) in the West Village, while Corrie worked long hours as a nightclub manager and then a bartender in the city’s East Village. Their careers were on track, but their lifestyle didn’t feel healthy. So, in 2015, they headed south.

They had planned to help a friend open a restaurant in Charleston, South Carolina, but when his plans fell through, the couple had to improvise. Three weeks after landing in a city in which they had no roots, the couple opened a Japanese-leaning food truck called Short Grain. Since then, Shuai has been nominated for a James Beard Award, appeared on Zagat Charleston’s 30 Under 30 list and landed on Bon Appetit’s Best New Restaurants list. He has also been dubbed an Eater “Young Gun.”

“We moved down here because we thought it was pretty, but so did everybody else,” Corrie jokes. “We’re all moving out of the big cities because we can’t afford it. Everyone’s testing out these new places.” 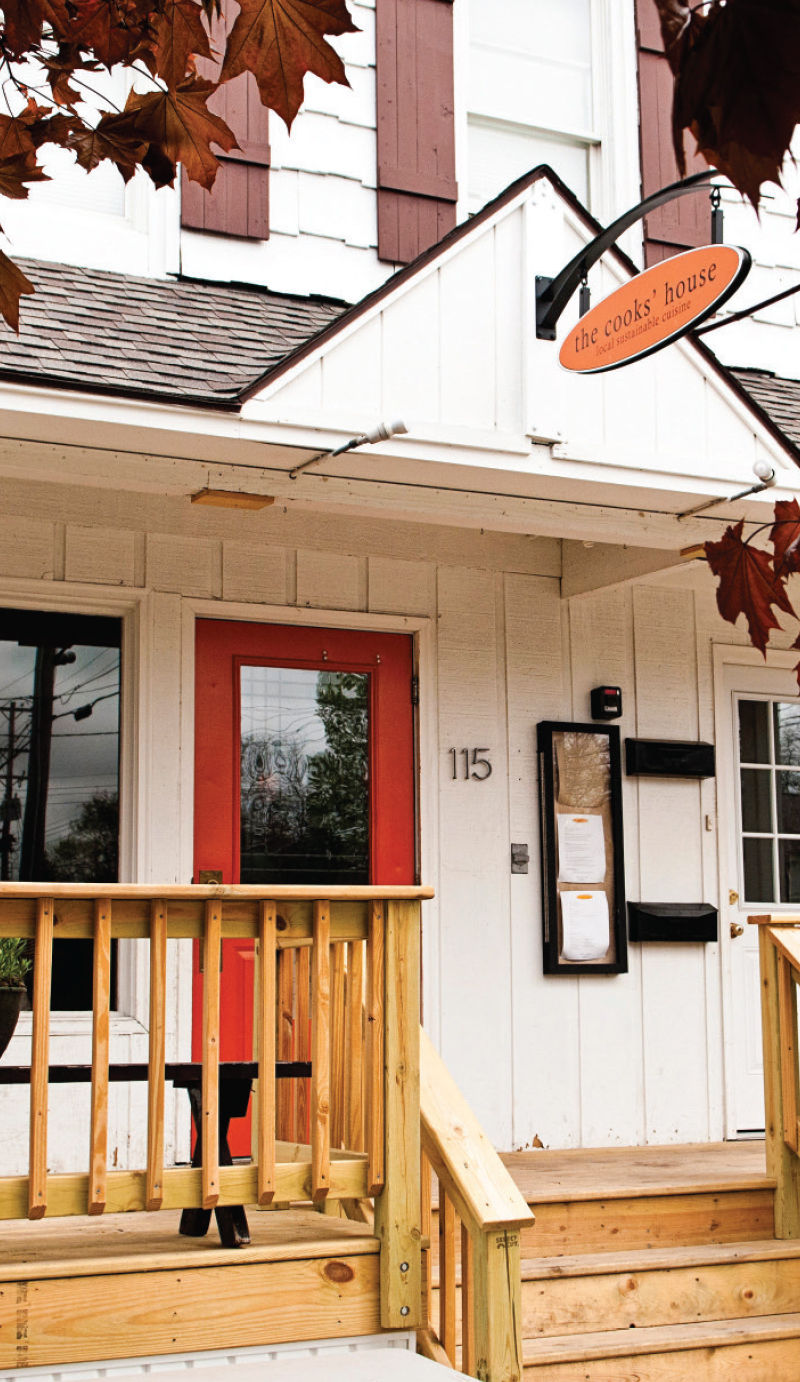 The Wangs moved to improve their quality of life – and they know they’re not the only ones. Chefs from New York City, Los Angeles, Las Vegas and other major dining cities are realizing the possibilities that small markets offer. But the restaurant business remains tough – and operating outside a major metropolis presents its own set of challenges.

What’s on the menu?

Developing a menu in small-town Narrowsburg, New York, isn’t like planning a menu in Brooklyn. “We knew that this town needed a restaurant, but we weren’t quite sure how people were going to respond,” says chef Paul Nanni, who co-owns The Heron in Narrowsburg with his partner, Marla Puccetti. Nanni had worked at Aquavit and Maggie Brown in New York City, while Puccetti was an executive producer for TV shows. The couple left the city in 2011.

Their restaurant has a core menu of about eight dishes, but Nanni has gradually worked in more adventurous offerings, such as tripe, tongue and octopus. Customers are on board when such ingredients are prepared perfectly and sold confidently by front-of-house staff, Nanni says. Food sourcing, however, can be tricky. Narrowsburg is surrounded by farms that supplement what Nanni can grow in his home garden, but finding purveyors for specific ingredients took time.

“Coming from the city, you get a delivery every day,” Puccetti says. “Up here, the delivery schedule is crazy. The reps for beer and stuff don’t come around at all.”

Making phone calls and personal visits to local farms has helped. But for Indian spices, the couple drives two hours back to the East Village to see their spice guy.

For Curate, chef Katie Button had to ask suppliers to carry certain products, such as Iberico de bellota and boquerones, for her Spanish tapas restaurant in Asheville, North Carolina. She does the legwork to find the importer, then tells the distributor.

But chefs considering a move to a smaller city shouldn’t assume that their customers will be unadventurous or averse to new ingredients. “We can be as creative as we want. People are there to eat your cooking; you don’t have to stick to this rigid menu,” says Short Grain’s Corrie Wang.

“There’s a lot more creativity than a smaller scene allows for.”

Small towns can make for a thin labor pool, but they can also tend to yield a loyal staff.

“Very talented cooks are hard to find,” says Shuai Wang. “Everyone’s trying to open a restaurant here, so they’re offering really competitive rates, starting people off at $16 an hour. Small businesses can’t keep up with that kind of thing; big restaurants with a lot of money behind them can.”

The current staff is solid, but labor for front and back-of-house has been their primary struggle, says Nanni and Puccetti.

Nanni’s brother moved from Detroit to work at The Heron, and the restaurant takes chances on younger, less-experienced servers.

“They’re the best ones, because you can get them before they have bad habits,” Puccetti says. “It’s been exciting to see kids experience some of our food. They try chicken liver mousse for the first time, or lamb. You see them taste it, love it, and then when they’re servers, you hear them talking about it.”

“I envisioned success as having a restaurant that was profitable and enough to give our family a salary that we can live on and enjoy,” says Button, whose Heirloom Hospitality Group also owns Nightbell in Asheville. She’s been either a finalist or semi-finalist for James Beard awards on numerous occasions and was named a Food & Wine Best New Chef in 2015. 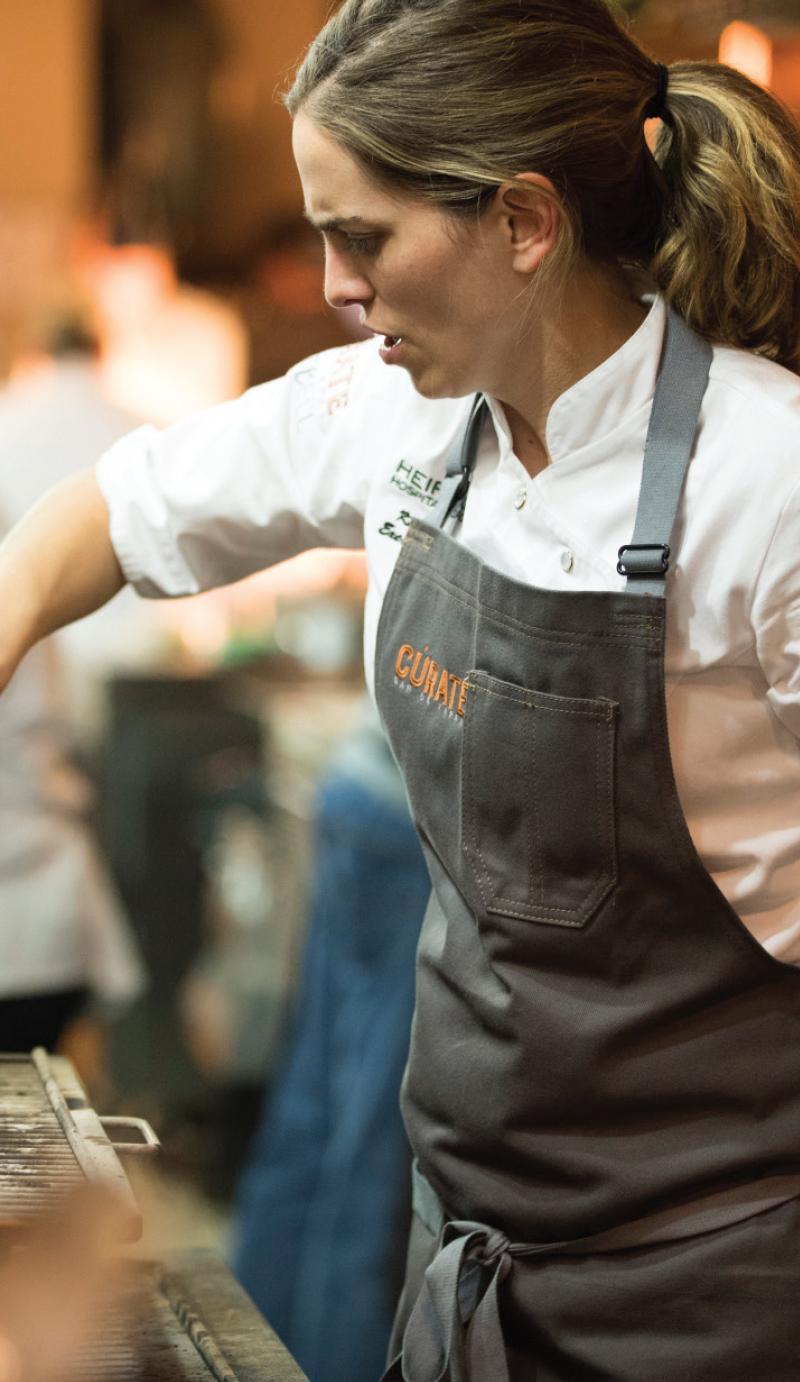 Part of securing that success was the result of purchasing the building that houses her restaurants. “It’s a safety net for you. If things don’t work out, the bank has more than just your business to lean on,” she says. “That to me was the biggest benefit to moving."

After stints at El Bulli, Jean Georges and Bazaar by Jose Andres, Button says owning the building more than makes up for what she misses about large cities.

“I miss all the possible things to do, even though you maybe never did them all,” she says. “In fact, I did really little because I was always so busy.”

The most common and perhaps least tangible benefit that chefs cite in moving to smaller cities is the cooperative nature of the industry. Relationships can pay off when the unexpected happens.

When the computer system at Button’s restaurants double-booked a private party room, she immediately called neighbor John Fleer of Rhubarb restaurant. His private room was empty, so he hosted the party, supplied two servers and allowed Button to walk her food down the street to Rhubarb.

“Make friends. Go be a regular at a couple places in the city,” says Shuai Wang. “When it comes to small towns, you have to come really humble and not with a big-city attitude.”

“We’ve seen some big names come down and leave within the year, because they didn’t check their ego at the door,” Corrie Wang adds. “You came for a reason, right? So just be nice.”

Restaurateurs who have made the move