In this Instagram-obsessed age, espuma clouds, sloppy sauces and boring blobs have no place.

Striking visual appeal with structure, color and precisely patterned garnishes make plating a “go big or go home” proposition. After all, the more times a plate is posted and shared on social media, the more momentum the dish, chef or restaurant gains. Here’s a wake-up call.

CREATE A SENSE OF PLACE

If a menu or particular dish was inspired by a food culture or region of the country, re-create in a physical form, the actual terroir of that environment. 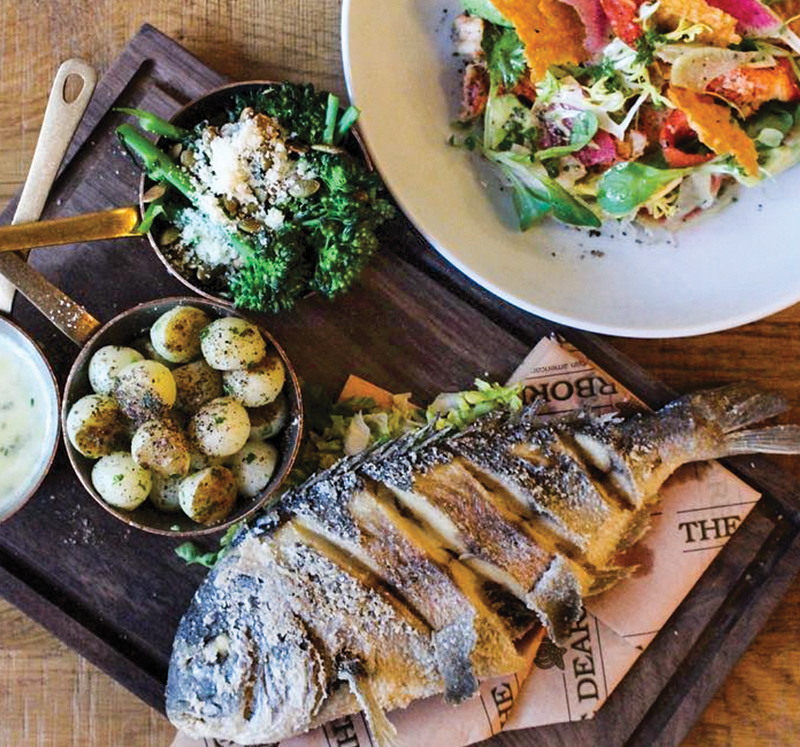 McCaskey says his tea-cured quail egg with beluga lentils, maitake mushrooms and black garlic dashi was plated to look like it sprouted naturally from a forest or along the Eastern coastline. “As I thought about the dish,” he says, “I was reminded of my own backyard in Maine.” The plate is surrounded by actual rocks, Deer Isle granite, lichen, moss and seashells, which allows diners to touch and see his inspiration, in addition to tasting it.

It’s like an edible terrarium, which doubles down on the idea of dining as a form of armchair travel. It’s still personal but also strikingly approachable and photogenic, which is why McCaskey’s plates often receive thousands of likes on social media, especially when they’re shared by the Michelin account and other fine dining influencers.

Jamie Simpson, executive chef liaison for the Culinary Vegetable Institute at The Chef’s Garden in Milan, Ohio, uses negative space to create a sense of movement and motion. For this savory take on a sea urchin ice cream (set on a black sesame sponge cake), Simpson evokes the sense that an urchin is crawling along the ocean floor, sweeping up flavors as it scooted along. 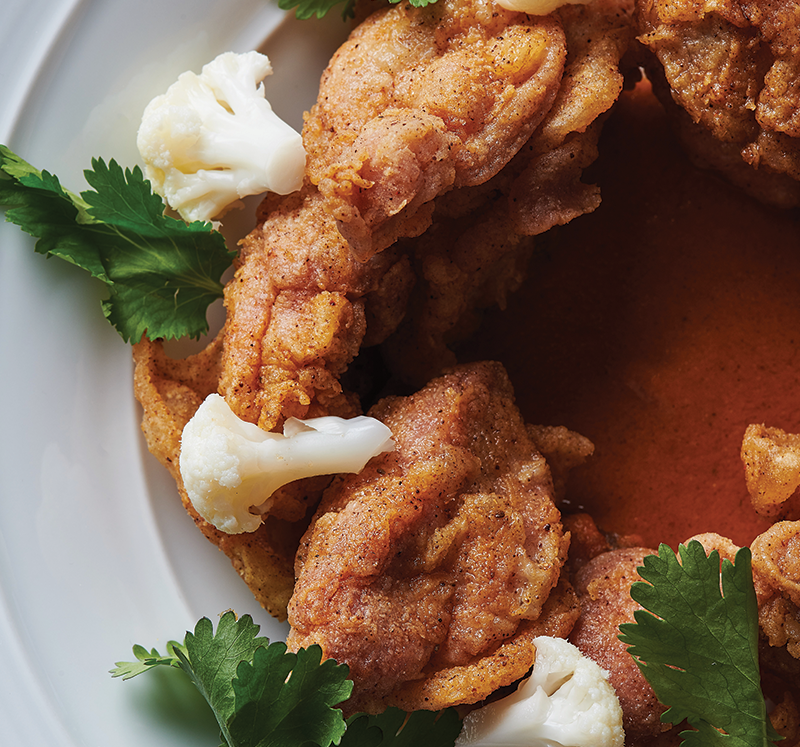 “I wanted to capture a snapshot of sea urchin with a perspective looking down from above through a lens, focused like a microscope,” he says. It’s an offering meant to tell a story about the ingredients and flavors on the plate and capture a freeze-framed moment in time.

“We start with the canvas, which is the baseline and undertone for the dish,” Simpson says. In this case, freeze-dried marine phytoplankton is sprinkled on the plate. Homemade stencils, ring cutters, squeeze bottles and tea strainers are then used to carve out unique shapes from bits of green apple, hibiscus, nasturtium, sweet potato, fennel, basil, black sesame and nori. The result is something that evokes wonder on Instagram – everyone is curious what the dish will actually taste like – but it also proves there’s still a reason to keep a pair of tweezers in your kitchen. 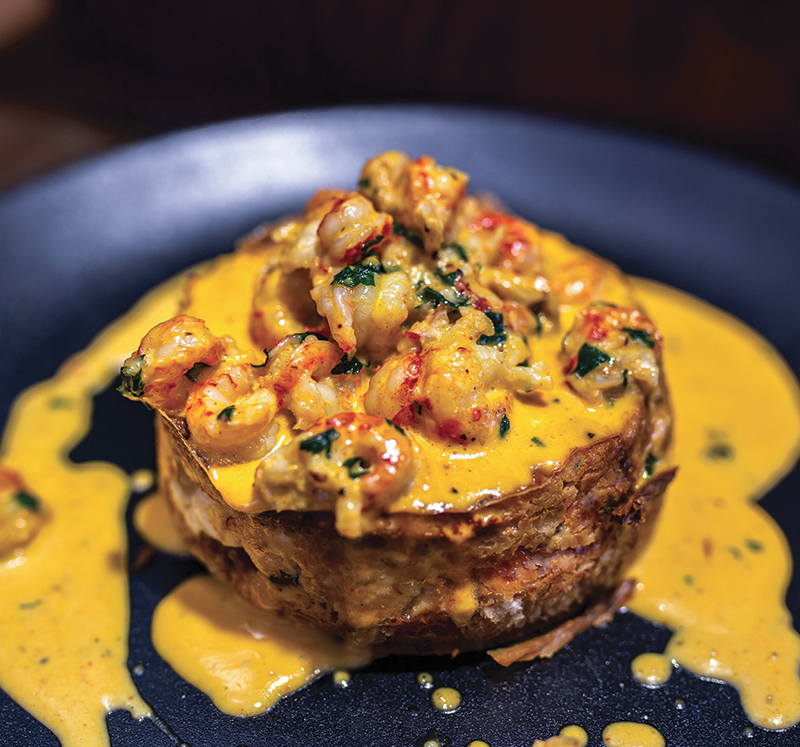 “The varying shades of yellow create a harmony between the ingredients, along with representing simplicity,” Austin says. “I want diners to focus on the taste and texture of the cheesecake, so I opted for a simple presentation.”

Austin’s crawfish cream sauce supplies the vibrant color, which is spooned over the cheesecake, followed by a simple garnish of thinly sliced green onions and greens that add a subtle color contrast to each bite.

The meaty smoked gouda and garlic cheesecake is rich, dense and meant for sharing. “The way the dish is presented makes it easy for guests to divide up and enjoy, without worrying who got the biggest or best piece.”

Peruvian Chef Ricardo Zarate is convinced that symmetrical dishes – composed of ultra-clean lines – never go out of style. “Humans are instantly attracted to symmetry,” Zarate says. “So I always like to use straight lines or a pattern of some kind to make the dish more artistic.” 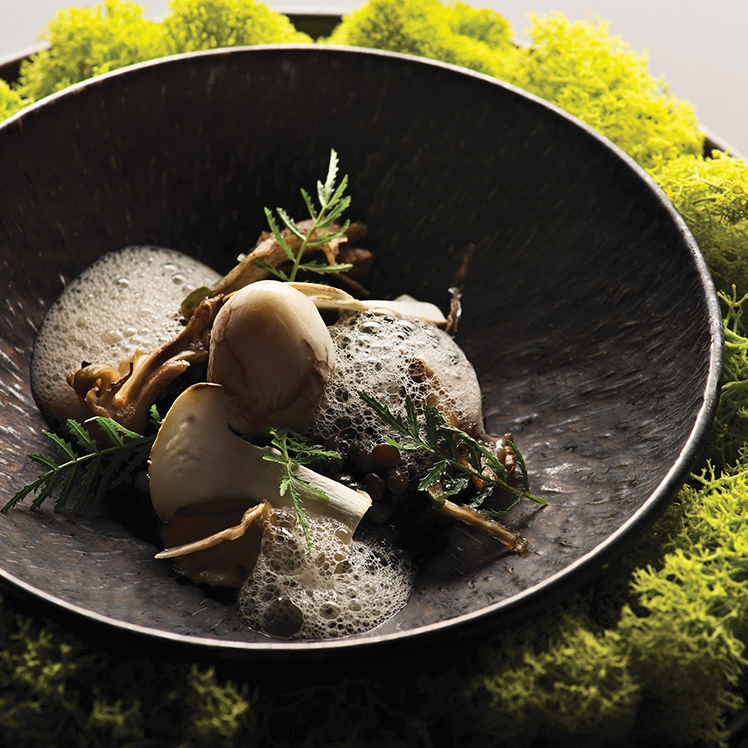 In unskilled hands, overly complex platings can be disorientating, as diners have to root around to find the right flavor combinations. Zarate prefers a more predictable progression – say protein, veggies, protein – along a straight axis, which provides diners a better sense of where they’ve been and where they’re going.

At Rosaline in West Hollywood, California, Zarate’s ensalada de beterraga (beet salad) begins with a vibrant stripe of magenta-colored beet purée. “The rest of the dish is a consistent pattern of burrata, beets and microgreens that are all placed the same distance apart so it’s all very clean and angular,” Zarate explains. “The scattered, popped quinoa was my way of making an otherwise symmetrical, angular dish more interesting.”