When so-called “ghost kitchens” started appearing on the dining scene, they seemed like an enterprising solution to several nagging problems: the tight labor market, rising costs and the public’s growing appetite for delivered meals. 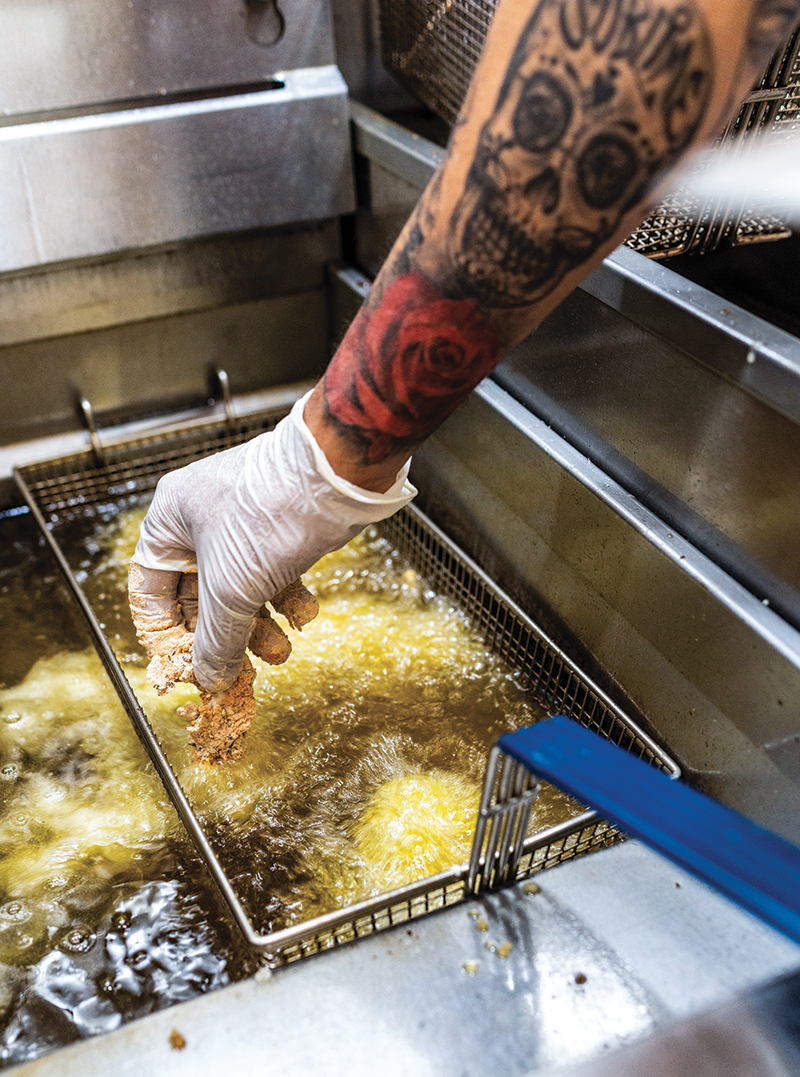 WHAT IS A GHOST KITCHEN?

Ghost kitchens – typically remote spaces rented by existing restaurants to handle delivery and takeout orders – are not for everyone, but they can open a new revenue stream, boost profits and grab more market share.

Originally launched as commissary ‘shared kitchens’ in off-site locations, many restaurants are starting to explore the option of running a virtual kitchen in their existing brick and mortar. The emerging option, using your own brick and mortar, involves picking a new menu type concept that uses many of your existing ingredients and building a separate digital brand. This option removes the overhead cost of a shared remote kitchen, while enabling the restaurant to serve food from their current concept, and a new cuisine type with low competition in the area. US Foods® recently launched Ghost Kitchens program provides operators with everything they need to launch.

Most operators launch a ghost kitchen to capture more of the hot delivery segment. U.S. food delivery sales topped $19.4 million in 2019, and Euromonitor recently estimated that ghost kitchens could potentially top $1 trillion in revenue by 2030. Restaurants that aren’t equipped to handle high-volume delivery may face certain challenges – but those that are equipped stand to make a big profit from the seemingly permanent shift to off-premise dining caused by COVID-19. 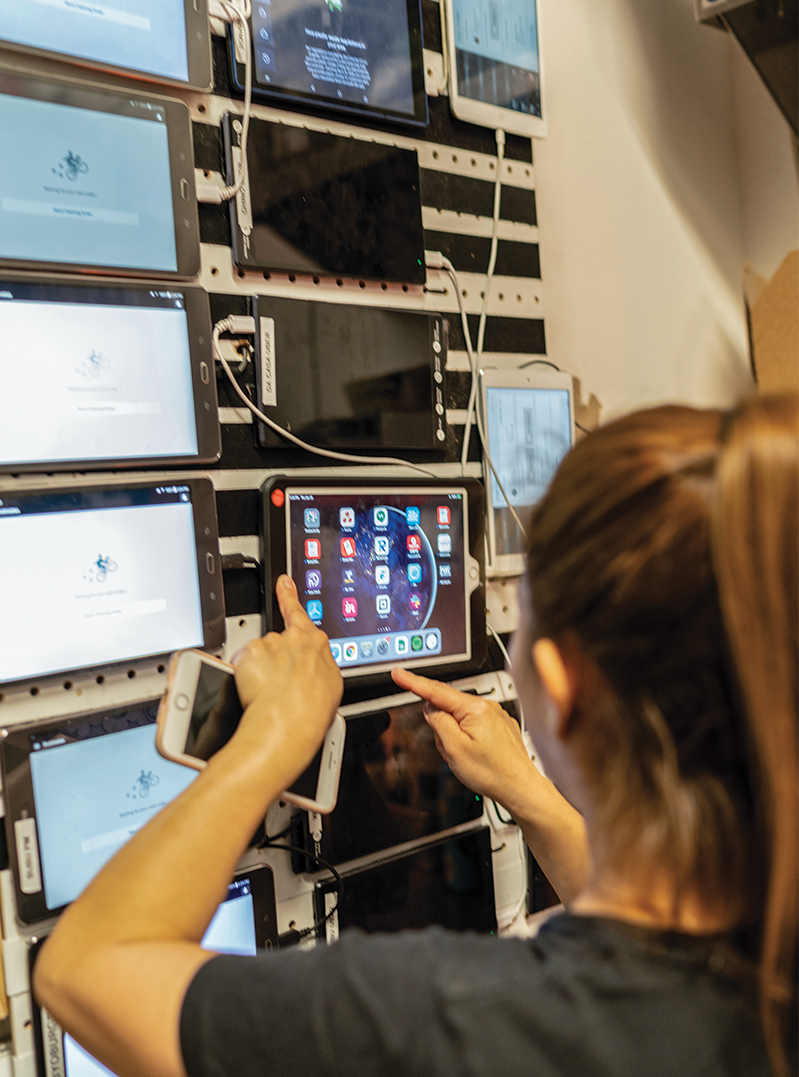 Terri Bloomgarden, co-owner of Canter’s Deli in the Fairfax neighborhood of central Los Angeles, says kitchen logjams drove her to open an off-site commissary dedicated to delivery orders. “We do a lot of takeout and delivery, and if you don’t have a separate area for that, customers don’t understand what you’re doing when they are in the restaurant, waiting in line,” she says. Reaching a potential new market – downtown Los Angeles – factored in as well.

For Terri, the off-site kitchen was the answer, but restaurants with larger kitchens, and those who are currently operating on limited dine-in capacity, can go ghost in their existing kitchen. The ghost kitchen concept can be turned on at the times most convenient and profitable for the operator. 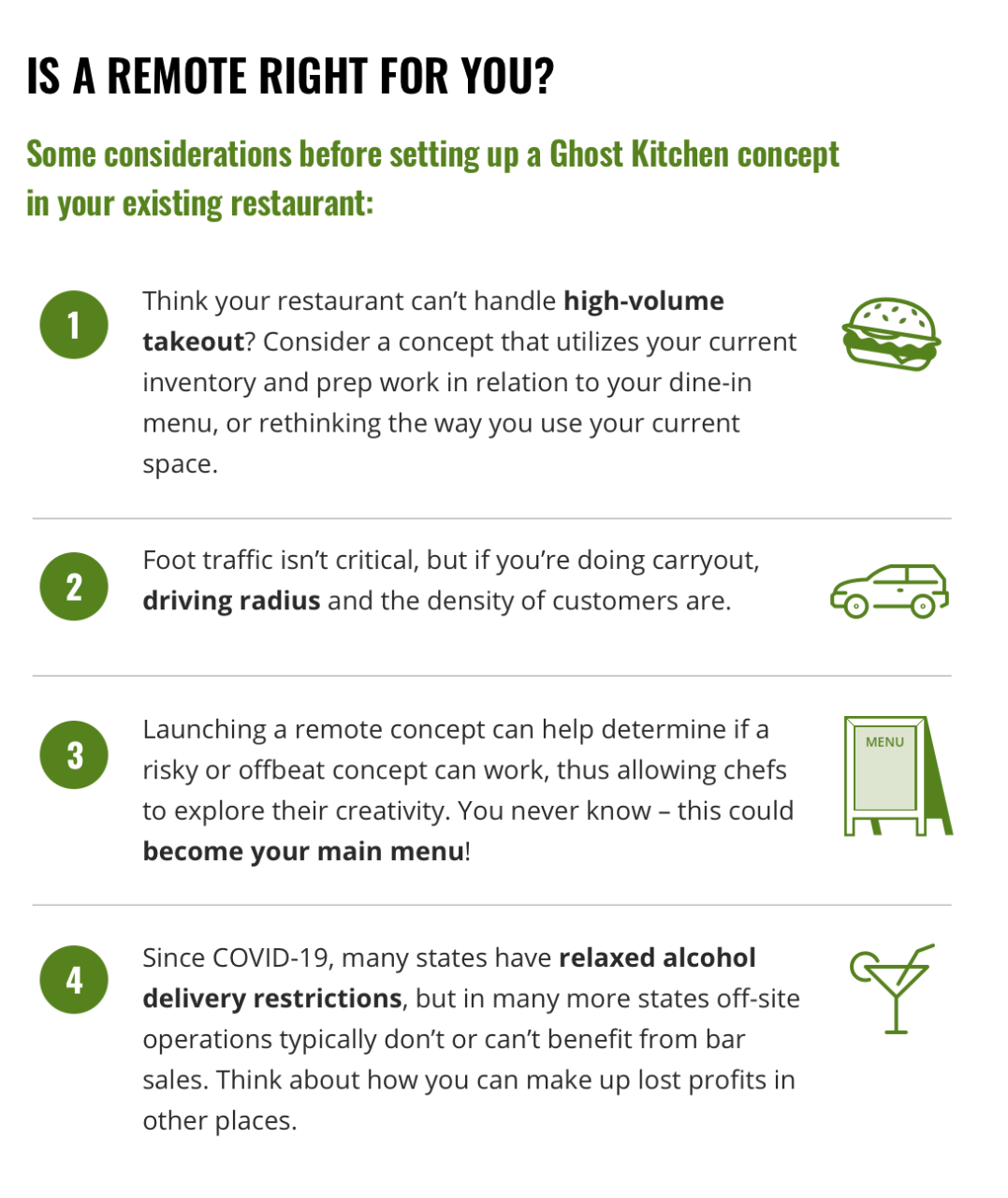 Leasing and equipping a commissary-style ghost kitchen is a bargain compared to building an entirely new restaurant, but using your existing equipment costs almost nothing to get started. Owners typically face $750,000 to $1.2 million in expenses to open a small restaurant in a high-demand urban area. Compared to $50,000 or so in initial fees for hiring, training and other opening costs can land a leased, fully equipped facility like those run by Kitchen United. With the new US Foods program, operators can launch a new concept in their existing kitchens for around $5,000, with very little additional labor and food costs required. 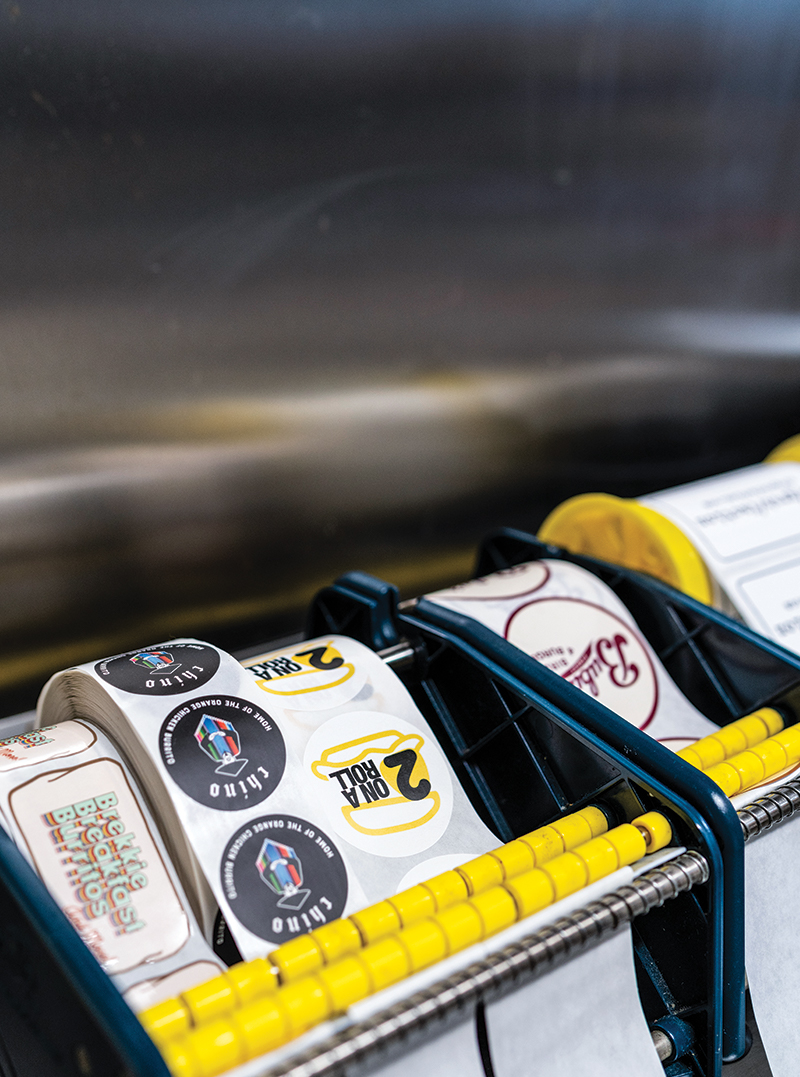 Unused space also can be devoted to building out a separate identity as a ghost kitchen concept. Will Gilson, co-owner of Boston’s Puritan & Co., converted a storage area into Puritan Trading Company, a takeout/delivery concept. The move has allowed him to explore global flavors. Instead of braised lamb shank and mushroom cavatelli, Puritan Trading customers can order banh mi sandwiches, fish tacos and seafood dumplings with piri piri sauce.

“The first week we were doing about the same volume that were doing out of the restaurant,” Gilson says.

Rich Levy co-founded three ghost kitchen concepts in Chicago – Cluckson’s, Butterclaw Lobster Co., and GuacDog. Leaving behind traditional restaurants, he targeted a specific niche, corporate catering – then set a 10-person minimum for orders. Levy, a partner and one employee handle all orders, and if more help is needed for events, he finds it. “In catering, the only time you have to be on is when the phone rings, and when you show up to deliver and present the food.”

Eric Greenspan, a Food Network regular and former chef at Patina and the now-closed The Foundry in Los Angeles, also doesn’t miss the pressures of a dine-in operation. He launched Alt/Grub/Fraction to allow for a more stress-free lifestyle. It’s a virtual food court that’s incubated four concepts: Chino (Latin-Asian fusion), Bubu’s (fried chicken and burgers), Brekkie (all-day breakfast) and 2 On a Roll (breakfast and deli sandwiches). “I can shift concepts and hours of operation on a dime,” he says. “With a [dine-in] restaurant, I have to be open and completely fleshed out. Now, if I change my hours, I’m not inconveniencing anyone. I can add and take away concepts, change menu items and see what effect that has on my business.”

Greenspan is eyeing the conversion of at least one brand into a growth vehicle for brick-and-mortar locations, but he plans to continue with delivery-only concepts. “The landscape is changing dramatically, and I think this is a good way to mitigate those changes,” he says.

If using your existing restaurant, the who-knows-how-long loss of dine-in capacity – and during winter months, outdoor dining – can be reversed by offering a ghost kitchen concept. This allows you to recover lost revenue, while using your existing equipment, staff, and many of the same ingredients. 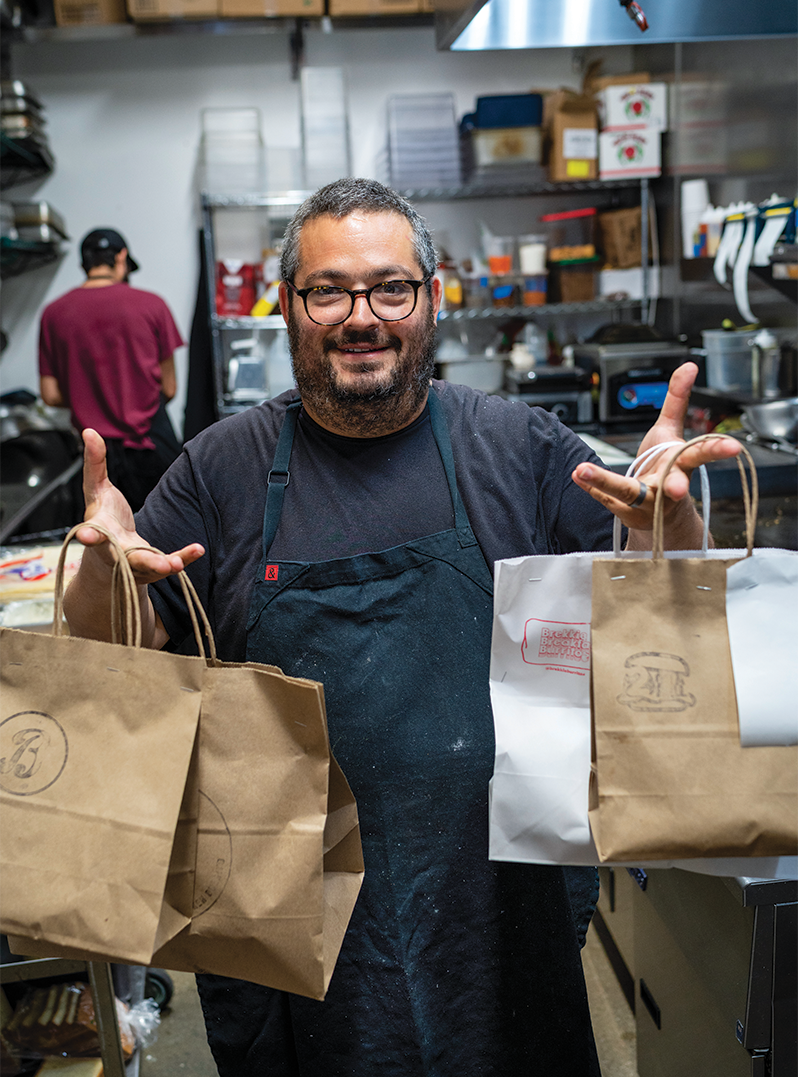 THE DEVIL IS IN THE DETAILS

Ghost kitchens come with their own set of challenges, says Lettuce Entertain You Enterprises chef-partner Tim Hockett. In 2017, he launched a ghost restaurant, ASAP Poke, out of a kitchen that serves two other Chicago brick-and-mortar concepts: Naoki Sushi and Stratford on the Park. “If you don’t do it with another restaurant there, you don’t have the benefit of dine-in or alcohol sales, which really drive the bottom line,” he observes. A ghost operation on-premise allows the staff to pitch in as necessary. Scoping out a high-demand area supported by digital natives is paramount, says Jim Collins, CEO of Kitchen United, which is growing and eying New York, Chicago, San Francisco, Los Angeles, Seattle, and some college and university towns – “where there is very deep penetration of delivery.” Ghost kitchens, he says, make the most sense in cities densely populated with millennials and Gen Z'ers, who order delivery several times a week.

Ghost kitchens, for better or worse, depend heavily on third-party delivery services, such as ChowNow, Uber Eats, Postmates and GrubHub, which makes it tough to forge a personal connection with diners. “It’s almost at the point where you can’t take it on yourself,” Greenspan says. “It used to be people would look at restaurant websites when they wanted to order food. Now they say, ‘I’m hungry,’ turn on their favorite delivery app, and start to scroll through to decide what they want to eat.” Initially, you may need to depend on third-party marketplaces for customer acquisition, due to hefty commission charges on some platforms – but once you’re more established, working with ChowNow on a flat rate can keep your business growing.

Cannibalization of an established restaurant’s business is also a risk. A potential workaround? Operate delivery-only as a “sub-brand,” separate from your flagship operation, offering either different food or a scaled-down version of the on-premise menu. The latter is probably advisable, since so many delivery orders are placed via mobile devices, where simplicity is a plus.

If operating as a separate brand, be sure to establish a strong brand presence via a website, social channels and Google Business, to gain diners’ trust. The US Foods Ghost Kitchens Program helps operators build a digital presence with industry-leading marketing solutions and expert support. With takeout becoming a fact of life, especially during and after the pandemic, ghost kitchens can help restaurants prepare for what’s inevitably on the horizon. “If people want it delivered, they’re going to have it delivered,” Canter’s Bloomgarden says, so make sure you’re ready to take the order.