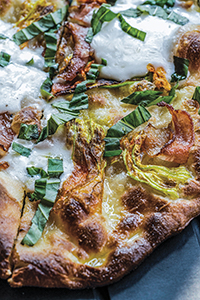 To some, the Triple Threat at Joe’s Rotisseria in Roselle Park, New Jersey, is pure pizza heresy. “A lot of old timers don’t like change,” says Chef-Owner Joe Brignoni. “They don’t want to see new innovations in pizza.” On the other hand, throngs of people actually do, as pictures of pizza are extraordinarily tempting to social media users. Take the Triple Threat: a bronzed calzone bordered by garlic knots that rise over a crescent of cheesy pepperoni pizza. Last May, a 110-second Thrillist video featuring sensuous close-ups of the “pie” racked up 4.8 million views on Facebook in a month. And now hundreds of people visit the restaurant’s Instagram account, “liking” and commenting on photos of other unorthodox pizzas, like buffalo chicken pinwheels and Oreo-cheesecake pizza on a Sicilian crust. “My goal was to post every single day something I wanted to eat,” says Brignoni. “I knew one day one pie would eventually go viral because all these pies are so different.” Brignoni belongs to a new class of pizza makers who are disrupting the pizza paradigm by leveraging social media, culinary creativity and technology to redefine what constitutes pizza. For them, pizza is a canvas capable of accommodating any of-the-moment trends, cuisines or dietary restrictions their guests demand.

A Canvas for “Anything Goes” 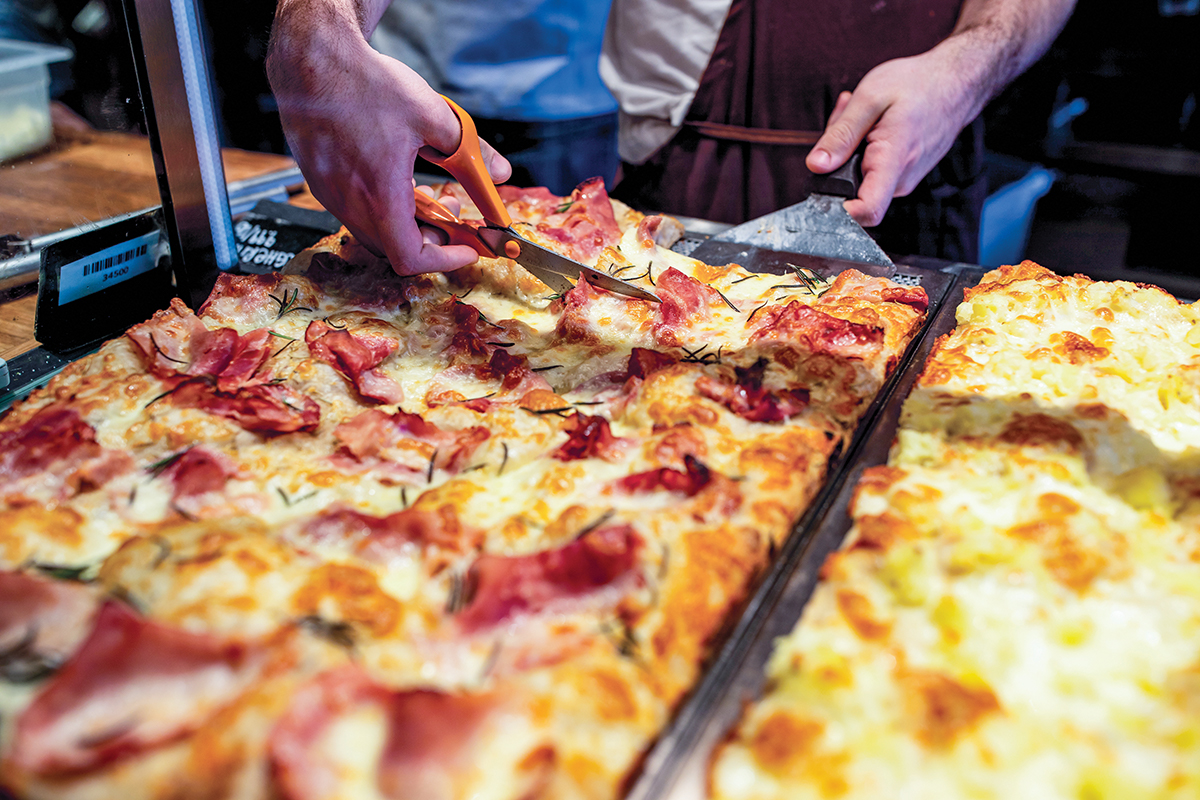 “Every culture has something that’s similar to a pizza,” says Chef de Cuisine Andy Dombrowski of Cowell & Hubbard in Cleveland. Which may explain why his pizzas are topped with a global array of ingredients, from barbecued pulled pork, Chihuahua cheese and jalapeños to chicken confit with fontina, mushrooms, goat cheese and truffle oil. At Krave It in Bayside, New York, Chef-Owner Vishee Mandahar takes a similar approach. His list includes a Greek lamb gyro pizza with tzatziki on a pita crust to the “Homer Simpson” – meatballs, bacon, glazed donuts, maple syrup and cheddar. He belongs to what he calls “the new age pizza” movement. “I think pizza is the gateway to everything,” he says. “No matter what culture you’re from, everybody loves pizza.” 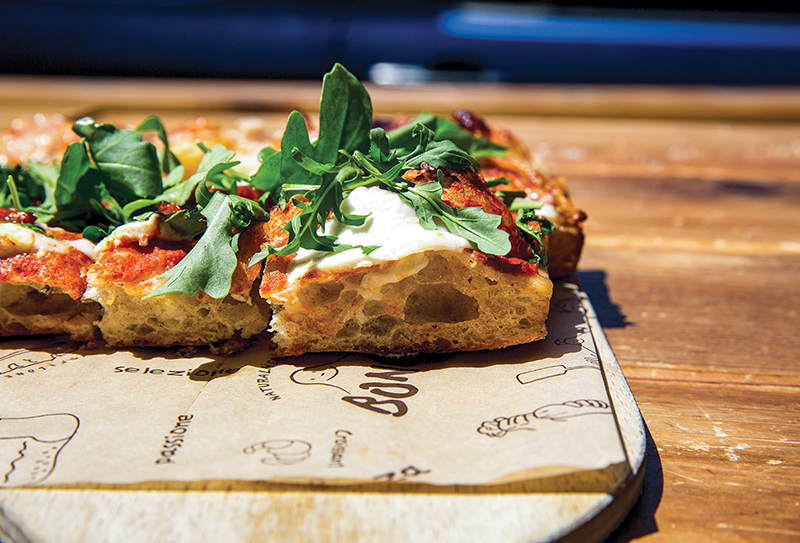 To make your mark in crowded market, zero in on a memorable theme. Chef Meghan Shaw of Pop + Offworld in Detroit bakes the kind of New York-style pizzas “that you would make if you were 17 and stoned.” They’re large and flat so she can sell them by the slice, but her toppings are unabashedly gonzo. One of her bestsellers is the coco curry, a vegetarian pie bedecked with yellow vegetable curry, a mozzarella and provolone cheese blend, crispy chickpeas and spicy cilantro chimichurri. There are ways to actively engage fans of these crazy pies on social media. At Paulie Gee’s in Chicago, owner Derrick Tung’s staff creates a meaty and meatless special every other week. Options run the gamut from the house’s Chicago hot dog pizza (yellow mustard base, pan-fried hot dog coins, grilled onions, pickled cherry pepper relish, hot dog breadcrumb mix) to the “Bechamee Mootzo” with vegan meatballs. At the end of year, Tung posts a Google survey, so customers can vote on their favorite pies. The winners are brought back into rotation.

As a franchise owner of the original Brooklyn Paulie Gee’s, Tung keeps some flagship combinations, but some of his most popular pizzas are adaptation of Detroit style pizza, with thick, cheesy, caramelized crusts. After making a pilgrimage to the original Buddy’s in Detroit, which is credited for inventing the style, he produced a Detroit-inspired riff with thicker cheese edges than you’d find in the Motor City. “Drawing off memory hasn’t allowed me to re-create the exact recipe,” says Tung, “but something that is truly our own thing.” At Gather in Berkeley, California, Chef Anthony Lee takes an unorthodox approach to forming his dough, which doesn’t often yield neatly circular pizzas. “We do not overmanipulate it,” he says. “We’re just simply taking our body weight down to the center of that dough with our palm and allowing gravity to do its work as the dough stretches off the side of our board,” he says. “We’re not throwing pies in the sky – just stretching it without molesting it.” 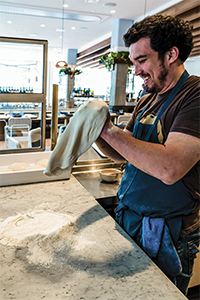 Catering to gluten-free diners has become a prerequisite in large markets. Trouble is, pulling off a crispy gluten-free crust is notoriously tricky – as it won’t rise like a regular pizza. “As a businessman you have to do it now,” says Erling Wu-Bower, executive chef at Chicago’s Pacific Standard Time. Bower found success by using a corn and rice flour blend, a heavy dose of yeast and experimenting with hydration levels, eventually lowering the amount of water and increasing the flour. His cooks wear gloves when they make the gluten-free pies to avoid cross-contamination with the regular pizzas, but guests are informed that both pies share the same oven. At Paulie Gee’s, gluten-free pizzas are stretched on a separate line with a dedicated oven. At Krave It, Vishee Mandahar avoids the problem by ordering frozen gluten-free crusts. It’s more proof that new ideas – and creative solutions – are boundless in the new age pizza laboratory.

INVEST IN THE PIZZA OVEN THAT’S RIGHT FOR YOUR RESTAURANT 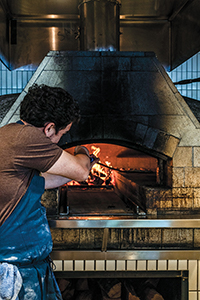 Oven: TurboChef high-speed conveyor
It’s awesome because we serve slices, we have to get them out really fast and we get super busy at night. It’s extremely user friendly and very fast.”
– Meghan Shaw

THE PROS AND CONS OF PIZZA DELIVERY

“In the beginning, we didn’t have a big customer base, so it was kind of tough to make a profit because these big services take 20 to 30% out of your pocket. But now things have grown, and they do bring us customers. It does work out in the end because you don’t have the headache of hiring delivery drivers. They also bring in a lot more traffic.”
– Vishee Mandahar, Krave It

“If you don’t participate, you’re just missing out on clientele that used to have to come to the restaurant. Quite honestly, there’s just not much of a choice these days.”
– Erling Wu-Bower, Pacific Standard Time

“Only in a 2.5-mile radius to control the quality of the temp. I’m getting robbed blind. When I was smaller, they helped me, but as a bigger company it’s starting to affect me more. When I was starting out they were charging me 9 to 10%, but the more money you make the more money they take – almost 18 to 20% ”
– Joe Brignoni, Joe’s Rotisseria

“Some operators think that if they offer delivery then no one’s gonna come. We found that was not the case. If anything, people got the delivery and said, ‘Oh it’s really good I wanted to come in and try it in the restaurant instead.' ”
– Derrick Tung, Paulie Gee’s