Tell Royce Burke that his carrot tartine or his twist on the breakfast burrito is genius, and a he’ll give you a knowing grin.

Since opening vegetable-focused breakfast and lunch spot Yarrow Cafe in Los Angeles over the summer, the carrot tartine has emerged as a signature dish.

He boils and purées carrots and drizzles in olive oil, which provides a pleasant richness, though the root vegetable can stand on its own. If the carrots are roasted, which concentrates the sugars in the vegetable, a splash of apple cider vinegar will round out the sweetness.

Before the purée is spread generously on a sizeable slice of grilled sourdough bread, it’s sprinkled with rosemary salt and topped with seared beech mushrooms, julienned beets, crispy-fried leeks, carrot top greens and a dusting of fennel pollen. It’s an antidote to avocado toast, which is overplayed, Burke says. Other vegetables, such as carrots, can also generate excitement and offer lower food costs. Finishing the dish with chopped carrot top greens adds another dimension, and uses a part of the vegetable that’s usually tossed.

The Burrito on 5th has also gained a strong following. Breakfast burritos are ubiquitous, but Burke applies a few twists that makes them stand out. The purée that’s used in the tartine also appears in the burrito, along with a lemon romanesco, which takes scrambled eggs and vegetables to another level. Those flavors are further amplified by the simple approach of wrapping a slice of Monterey Jack cheese on the outside of the burrito and searing it in the grill. The toasted cheese changes the flavor exponentially compared to comingling with the eggs inside the burrito.

Sizable and filling, the breakfast burrito, carrot tartine and other a.m. dishes blur the line between the morning and afternoon meal, contributing to the growth of breakfast while sales for lunch remain flat, according to food research firm Datassential. 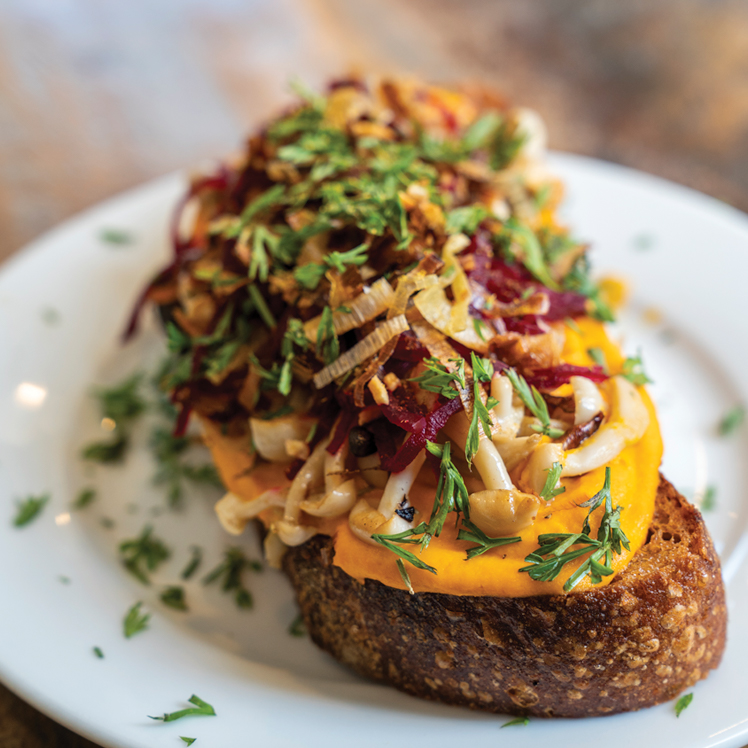 Heat a sauté pan with olive oil, and sear mushrooms, season with salt; set aside. Clean and trim leeks, julienne and fry. Drain and season lightly with salt.

To plate, grill the bread, spread the carrot purée generously on each slice. Top with the mushrooms, beets (like an elongated nest), followed by leeks, carrot greens and a dusting of fennel pollen. Makes 4 servings.