In times of uncertainty, people crave comfort foods. This was true after 9/11, during the 2008-2009 financial crisis and prevails today. At some point, everyday diners will seek meals that can transport them back to less-stressful times or provide relief from the constraints of sheltering in place. 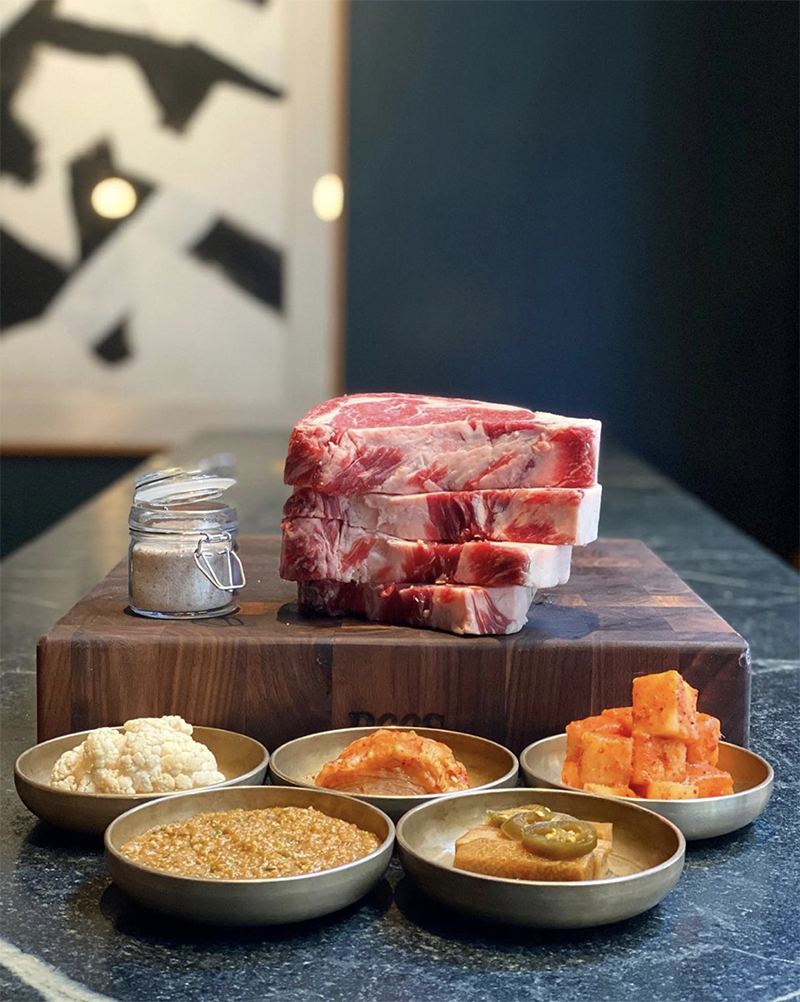 But not just any kind of comfort. Offer a complex mix of ingredients for dishes they can no longer find or offerings that demand kitchen skills beyond their reach. Soon, old friends and perfect strangers can become future regulars.

Different concepts can fill these needs in different ways. Some independent fine dining restaurants are surviving by abandoning tasting menus in favor of to-go dishes with an aura of exclusivity, like Beef Wellington and Coq au Vin. Others are offering meal kits that provide a mix of customer favorites and at-home kitchen entertainment. Familiar comfort foods such as Pasta Bolognese, pizza or pancakes – which blow away store-bought sauces and grocery store alternatives – are also popular. 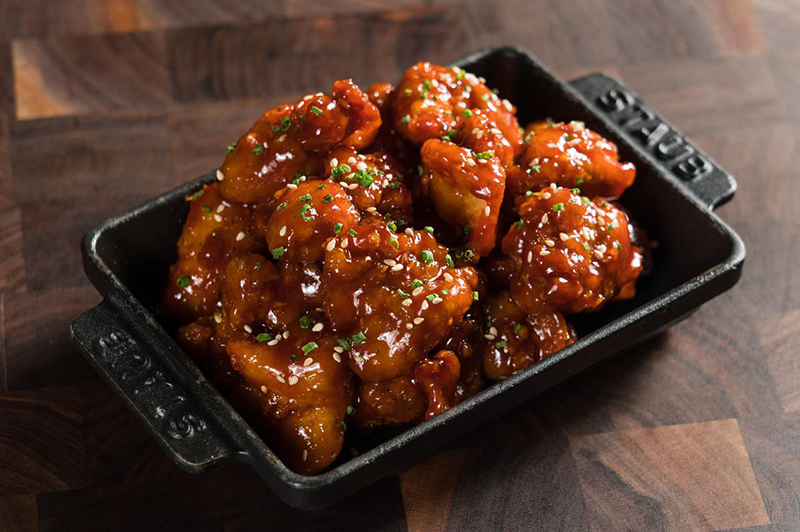 “We never did delivery before,” says Simon Kim, owner of the Michelin-starred Korean steakhouse Cote in New York City. “I would have laughed if you told me a year ago, but we immediately launched our steak package (see photo, right) to sell off inventory. I’m keeping all of my salaried employees at full pay and coming up with different avenues to do that.”

Here are some examples of how operators are fighting to stay alive. 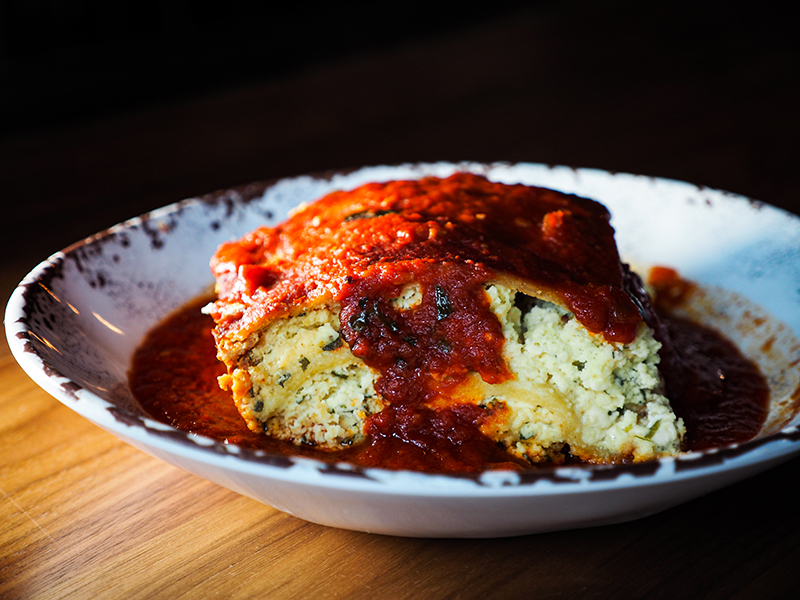 After Illinois issued shelter-in-place orders in March, The Fifty/50 Group closed 10 of its 13 restaurant locations in Chicago. Its three Roots Pizza locations could stay open because the restaurant group had an established infrastructure in place, which included drivers, online ordering capabilities and apps for delivery. Co-founder Scott Weiner says his delivery business more than tripled, but they’re still not making much money. “All I’m trying to do is make sure we’re relatively cash-flow neutral,” he says, a sentiment echoed by every chef and operator interviewed.

"More people are ordering dessert, too. “We sold out of pies on Sunday at all locations."
—Scott Weiner, co-founder of Roots Pizza

He says his initial wave of orders centered on popular items, especially pizzas and mozzarella sticks. But returning guests, some of whom place multiple orders a week, are diversifying toward pasta and sandwiches. “People are ordering five sides of ranch (dressing) like they’re stocking up,” he says. Plus, more people are ordering dessert, too. “We sold out of pies on Sunday at all locations,” he says. “Our pies are really good and have always flown under the radar, so I’ve been happy to see that.” 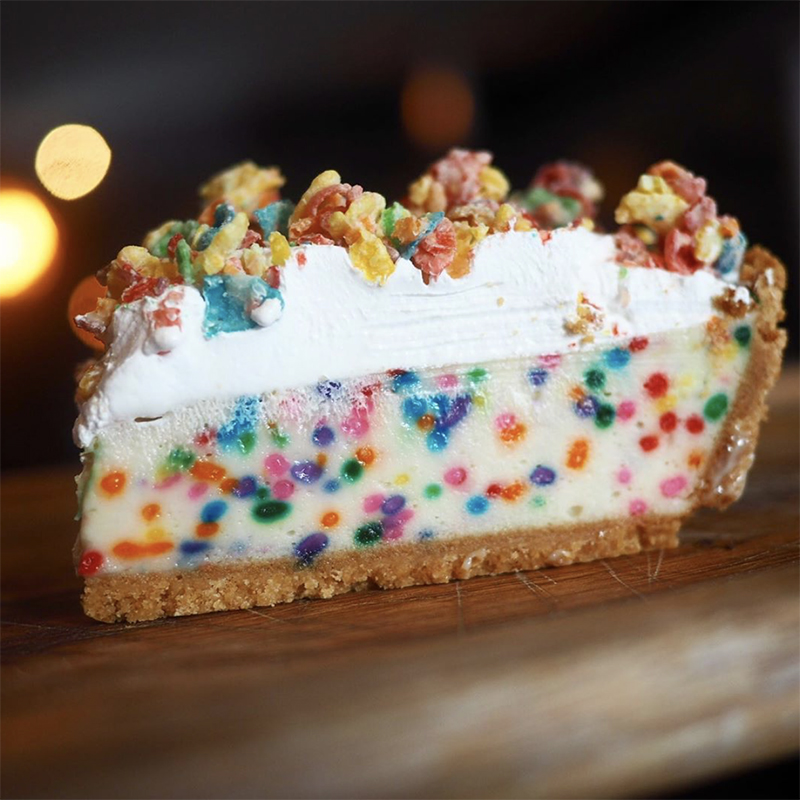 Weiner reports that GrubHub has been “pretty much worthless because everybody is on them,” which is why he’s relying on email blasts to his 22,000 subscribers and those who’ve ordered from Roots Pizza in the past. “I think social media has a small part to play,” says Weiner, “but it’s been going to our lists and reengaging people that we’ve collected over the years.”

Before COVID-19, George Chen, owner of China Live in San Francisco, restricted selling items that might not taste as stellar at home as fresh out of the kitchen in his restaurant. But now, his staff is making small alterations and providing instructions for items that don’t typically travel well. He’s seen a direct benefit: Much of the $5,000 a day in takeout and delivery orders comes from Peking duck pockets and sheng jian bao dumplings to-go, nibbles that allow diners to sample a portion of the large feasts they once enjoyed inside his restaurant.

For his duck pockets, he serves housemade hoisin sauce and kumquat glaze on the side and suggests toasting the sesame biscuits at home before assembling. “We torch the duck skins a bit more just before packing and punch holes in the box top so it doesn’t steam up and ruin the texture,” he says. “We suggest folks at home use a creme brûlée torch if they have one and touch it up a bit to get it even crispier.” 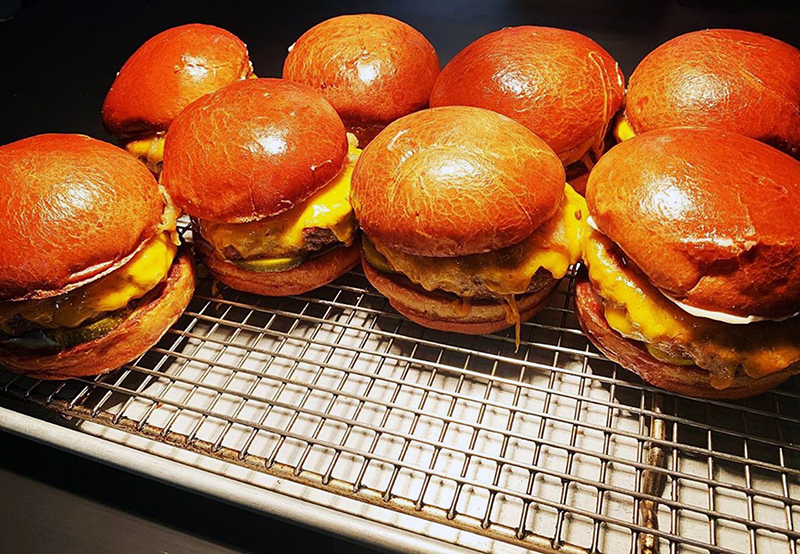 Instead of serving soup dumplings, which would collapse during transit, Chen switched to sheng jian bao, which are traditionally warmed in a cast-iron pan. He’s adjusted the recipe so they can be warmed in a microwave for 15 seconds if diners lack a cast-iron pan. “I’ve cut down the gelatin part that’s made from pork stock,” Chen says. “When you bite into it, you want that juiciness, but I’ve reduced that down a little bit, because when it gets cold it can be less enjoyable.”

Stick With What You Do Best 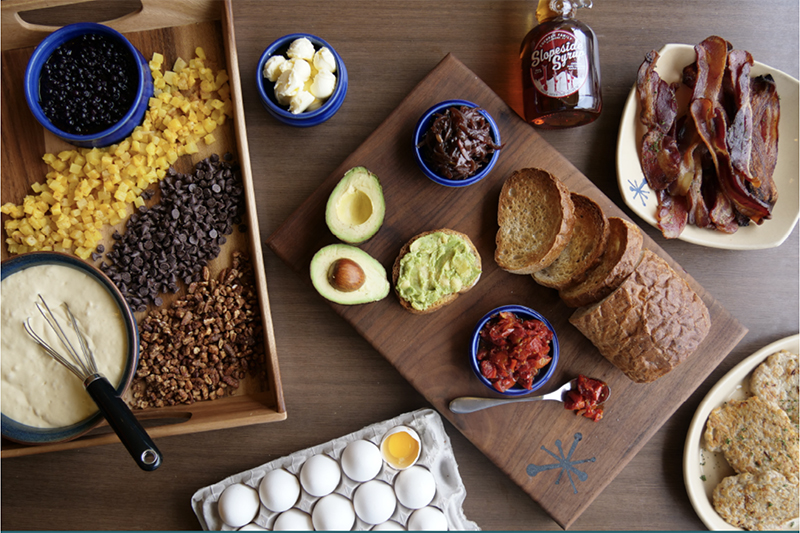 With 41 locations in six states, Snooze A.M. Eatery had begun experimenting with delivery at a few of its locations before the COVID-19 crisis hit. “Instead of testing systems, we just had to go,” says regional chef Jon Schwartz. His advice? Stick with your beloved brunch staples. His pineapple upside-down pancakes and green chili-smothered burrito were top-sellers before and continue to be top- sellers now. “Our guests are eating more comfort foods than thinking about healthy foods,” says Schwartz. “People are looking for something familiar and safe that’s going to sustain them.”

Grandmother’s Bolognese is still a bestseller on the streamlined takeaway and delivery menu at family-owned Pasta Sisters in Los Angeles. Burrata and bottarga have become impossible to import, but they’re still making fresh pasta daily. “The secret is our Bolognese simmers for more than nine hours,” says CEO Francesco Sinatra. “It’s always been a comfort food for me, and I think our customers feel that same comfort during these times.” Sinatra is also encouraging guests via social media posts to buy fresh pasta to cook at home or order an extra lasagna to freeze for later, which has bolstered to-go check averages. 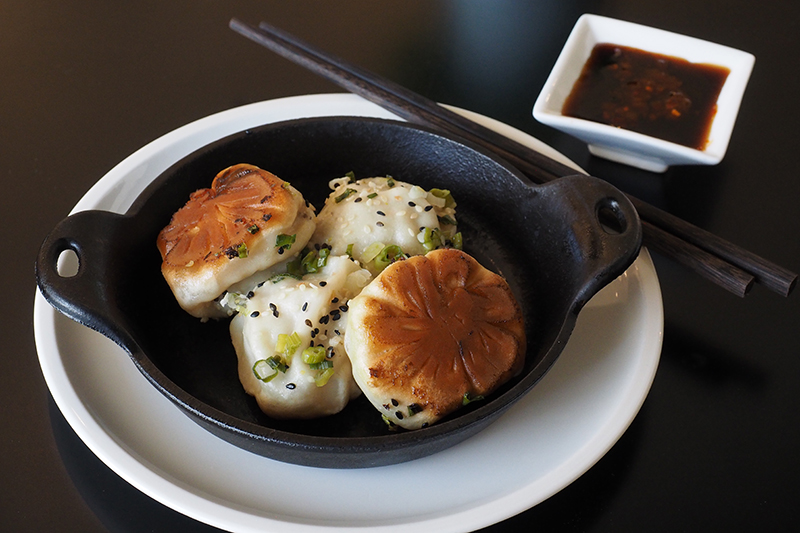 Many Michelin-star restaurants have opted for family-style prix fixe menus while others, like Acadia in Chicago, are serving lobster rolls and burgers from their bar menus. Cote is serving updated bar favorites, like sweet and tangy chicken nuggets, along with rice bowls for the first time. The butcher’s cut bowls feature three different cuts of steak served with kimchi, pickles and rice, a condensed single-serving version of Cote’s best-selling butcher’s feast. 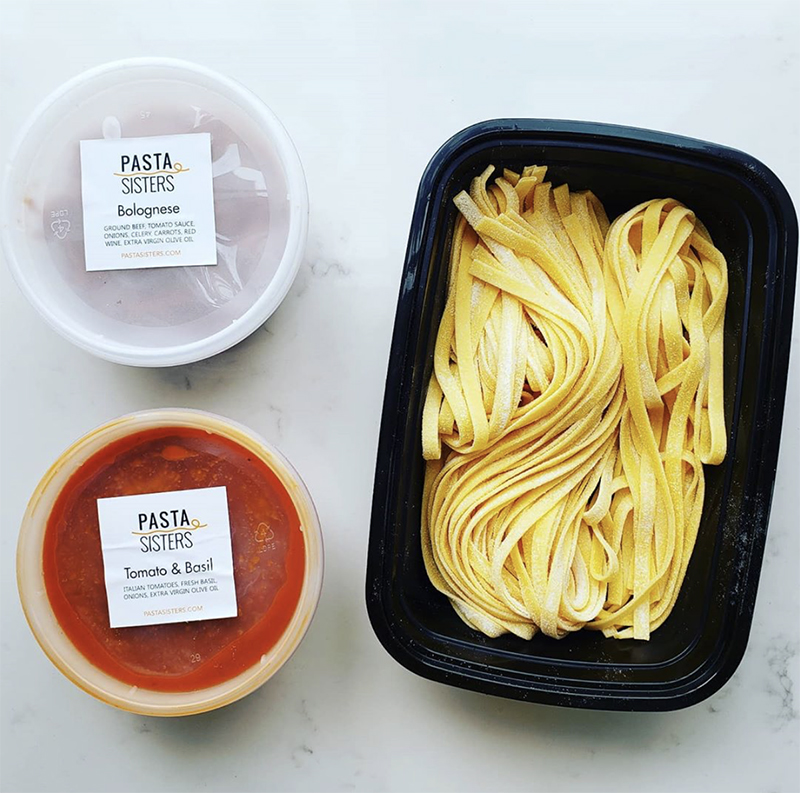 “Our customers aren’t just ordering Cote to fill their stomachs,” Kim says. “They’re at home, kind of bored, and I want to give them something to look forward to.” Kim was surprised their $48 steak and eggs – hand-cut filet mignon tartare with golden Osetra caviar and milk toast – has been such a hit, but he assumes it’s allowing people to splurge at home. Cote is also offering a $200 wine package that includes a rare bottle that would normally be priced for $400. Beverage director Victoria James selects a bottle to pair with the meal along with tasting notes and descriptions, which provides the restaurant a way to liquidate their wine inventory at retail prices.

To show his appreciation, Kim has been tagging regular guests on Instagram posts, thanking them for their orders and including extra dishes on the house, a fine dining hallmark. “They’ll tag us back, and we’re able to engage with our customers in a real way,” he says. “It’s become a fun communication tool, almost like a love affair.”

How to Build a Shelter-in-Place Menu

Until a vaccine is widely available or shelter-in-place measures are uniformly enforced across the country, most experts predict COVID-19 hotspots will continue to pop up and force foodservice closures or abbreviated hours. To be better prepared, operators can benefit from their peers’ early efforts:

Make It A Meal Kit 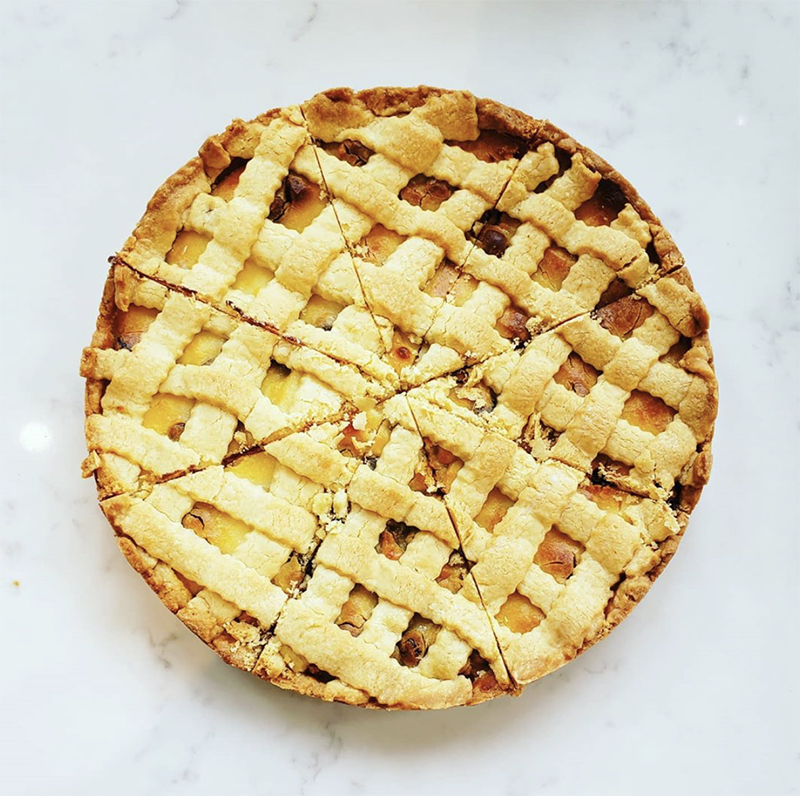 Netflix, puzzles, games, books and virtual meetups can become repetitive. That’s why meal kits that allow for engagement are so appealing and potentially profitable for restaurants, especially when customers cannot source the same level of ingredients. The contents are prepped, ready to mix and cook.

❱ BRUNCH IT OUT: Snooze A.M. Eatery offers pancake party kits for $45 with 32 ounces of buttermilk batter, chocolate chips, seasoned pineapple, blueberries, candied pecans, maple syrup and butter so diners can do brunch at home. The kit also comes with ingredients for Bravocado Toast, which pairs smashed avocado with red onion honey jam and roasted tomato atop rustic bread with some additional fixings. It feeds four to six people, which helps diners to see the kit as a real value. Snooze’s bravocado toast is $13 and pineapple upside-down pancakes are $9 on its dine-in menu.

❱ STRETCH IT OUT: Farmhouse at Roger’s Gardens in Corona del Mar, California, offers a kid’s $6 take-and-make pizza kit that includes dough, mozzarella and housemade marinara sauce. Pepperoni or fresh veggies can be added for a $2 upcharge.

❱ BIG BOX: Dan Barber of Blue Hill at Stone Barns in Tarrytown, New York and Stone Hill in New York City, is selling out of a build-your-own hotpot box stuffed with ingredients from his farm, some of which are ready to eat and others to be prepared, all for $160. They include eggs, vegetables, locally raised meat and charcuterie, turmeric broth, yogurt, granola, jam and heirloom grain bread. All the proceeds go to paying staff.

❱ ONE NOW, ONE LATER: Pho Bac in San Francisco is offering $10 pho to eat upon delivery and for another $10, ingredients to make another at home – an approach that any ramen or noodle place can offer.