Call it the Eataly effect or the next-generation food hall, but the new-style slashie—multiple concepts from one owner all under one roof—is helping restaurateurs maximize profits while feeding consumers’ craving for abundance and variety.

“It’s a challenge to what’s normal, but I like that dynamic,” says David Spatafore, principal of Blue Bridge Hospitality. “I went to Eataly three or four times at different times of day to watch the customer patterns—the tourists sitting at the wine bar or pasta bar, other people trying to get sundries to take home. It’s utter chaos, but no one seems to mind.”

So when Spatafore launched Liberty Public Market in San Diego earlier this year, he added his own brands to the mix of 20-plus vendors, including ice cream shop Scooped by Mootime, wine bar Grape Smuggler, Crafted Baked Goods and Mess Hall, a full-service restaurant featuring produce and ingredients available inside the market. The restaurant, which sits where the Navy Training Center’s mess hall once served sailors in the 1920s, has a menu primarily sourced from the vendors inside the market. “We try to use the market as our distributor and the vendors as the basis of our dishes, so we can continuously change what we’re serving,” he says. “Just like a mess hall in the Navy, diners never know what they’re going to get.”

And, in some ways, neither does Spatafore. He calls the mashup of a sit-down restaurant amid food stalls and grocery stations experimental. “There’s no textbook definition of what it means for this to be successful because there’s no precedent for it,” he says.

But the group format and synergy among the concepts position them for success. They can share resources and talent while appealing to a wider audience. The approach is an advanced form of the slashie, which typically features a full-service restaurant along with a smaller side operation, such as a bakery or fast-casual concept.

“With restaurant groups, the only question of having multiple concepts under one roof that matters is: Does it work?” says Brendan Sodikoff, a Chicago-based restaurateur. “Sometimes there’s a reason it doesn’t make sense, but oftentimes you can get economies of scale, with labor and staffing, and efficiencies in construction by combining things.”

For Sodikoff, it’s 3 Greens Market, launched earlier this year, featuring the greatest hits from his wildly popular restaurants. The 5,000-square-foot space is made up of burgers from Small Cheval, barbecue from Green Street Smoked Meats, doughnuts from Doughnut Vault, and an extensive selection of entrees, side dishes and salad ingredients.

Extend the Rush—and the Revenue

Rare is the butcher that’s bustling at 9 p.m. or the full-service restaurant at 5 p.m. But by combining those two concepts along with a bar and party space in one building, Kensington Quarters in Philadelphia stays busy for a much wider window of the day. “We have a decent lunch crowd, when the butcher shop tends to be more quiet, and then the butcher shop gets busy during the week right before the dinner rush, when locals are shopping on their way home,” says General Manager Tim Kweeder.

3 Greens Market does its briskest business in coffee and housemade pastries during the morning commuter rush. Later in the day, the heavy foot traffic shifts over to the massive salad bar and grab-and-go counters. “You’ve got to look for ways to stretch your appeal, to draw in a different demographic,” says Sodikoff.

Bagels and coffee may not sound like giant moneymakers, but that sales bump can be enough to move your margin. “So much of what you’re selling is to get your base costs, like rent and management, covered,” he says. “Often, those last dollars are the most important. If you can add some concept that pulls in an extra $1,000 a day and you’ve already got your base covered, you might get to keep about 40 percent of that.”

“In San Diego, a standalone restaurant that’s experimental would probably fail,” says Spatafore. But nestling 50 seats and an evolving menu inside a food hall, with more guaranteed sales from staples like ice cream and pastries? “It’s like an insurance policy to walk that line of experimental,” he says. “We don’t have to be as concerned with having something on the menu for everybody.” If Joe Everydiner doesn’t like the white bean prosciutto parfait or the cauliflower steak with zaatar, let him eat at any of the options vying for his attention.

Multiple concepts in one place generate more revenue than one when the options are diversified and balanced, Spatafore says.

Sell Beyond the Belly

Upselling dessert to a diner who’s sated can be challenging, but slashies have the advantage of selling food to take home. At Mess Hall, for instance, servers are trained to tell diners about the ingredients sourced from the surrounding vendors. “Whether it’s talking about the beer from the retail shop or the plated pasta dish sourced from the pasta stall, it all ties back to the take-home element,” says Spatafore.

In San Francisco, Local Kitchen and Wine Merchant is a slashie that houses a wine cellar with communal seating for tastings and a full-service restaurant. “You might think two concepts would make things more expensive, but it’s actually more streamlined into one fluid program,” says Dylan Peters, the beverage director. For example, diners are offered 50 percent off any bottle of wine to take home from the cellar.

In fact, giving diners easy access to produce and pantry items increases traffic, sales and the customer base, says Kweeder. Customers who dine at Kensington Quarters’ restaurant once a week or less shop multiple times a week for staples like ground beef, chicken stock and bacon.

“As the modern consumer has a greater appreciation of sustainably raised animals and organic produce, we are a great outlet for that customer,” Kweeder says. 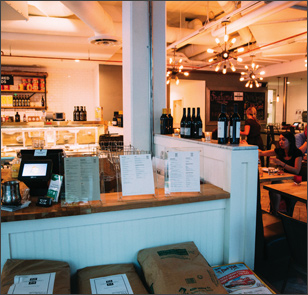 Avoid these pitfalls for launching a single-building multiconcept.

Self-competition: Separate concepts under one umbrella? Genius. Overlapping concepts yoked within one brand? Confusing. For example, don’t serve a fried green tomato dish at one spot when there’s already a separate Southern concept.

Standard Seating: Instead of a uniform setup that would appeal to every demographic, offer diverse seating options, with four-top tables in one section and comfy sofas in another.

Random Selections: Track best-sellers week to week, and consider all the possible factors, such as the day of the week and time of the year, to determine what customers like the most. 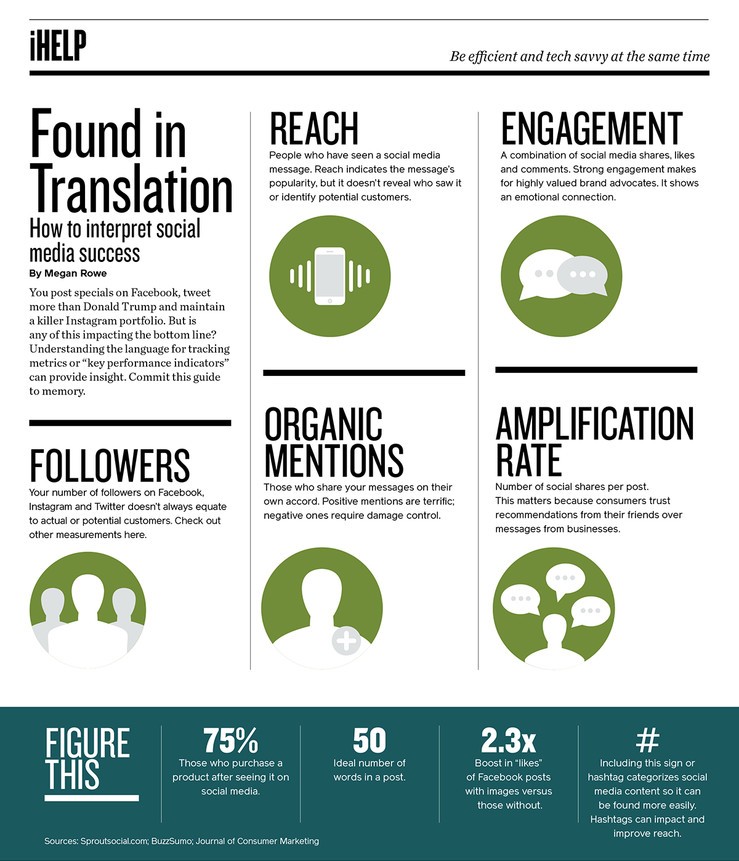 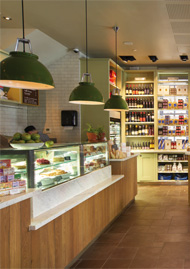 THREE MORE SLASHIES
THAT ARE KILLING IT

Carluccio's Italian Cafe and Market: With more than 100 locations worldwide, this Eataly competitor opened its first U.S. location in Alexandria, Virginia, last year. Diners can polish off their pancetta and egg sandwiches in the restaurant, then pick up imported staples, left,
to cook at home.

Field Table: This Madison, Wisconsin, slashie has been slammed since it opened earlier this year. It includes a coffee bar, a cheese counter, a full-service restaurant and a produce market.

Summer House Santa Monica: Chicago’s Rich Melman is a multiconcept pioneer, launching Foodlife, an amalgam of unbranded concepts in Water Tower, 25 years ago. In recent years, the restaurants under his Lettuce Entertain You
umbrella have launched first-wave slashies like M Burger inside of fine-dining temple Tru. Summer House is the latest, featuring a bakery and Stella Barra Pizzeria.