For far too long, the suburbs have been type-cast as the place where innovative restaurants go to die. The sprawling expanse of strip malls and chain restaurants seemed an improbability for chef-driven restaurants that dominate busy city neighborhoods. No population density? No foot traffic? No significant lunch crowds or food-obsessed diners? No chance—until now.

The suburban dining scene is transforming into a land of opportunity, from Boston to Chicago to Portland. Pockets of food communities are popping up in suburbs as diners tire of schlepping to the city for a memorable meal.

“The casualization of fine dining has changed everything,” says Mary Chapman, senior director of product innovation for food industry research firm Technomic. “Suburban diners don’t see dining out as a special occasion anymore. So if you can give them something unique and affordable that’s closer to home, they’re more likely to try it.” 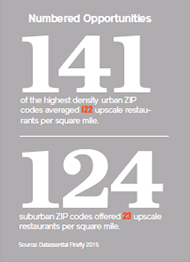 The suburbs are a relief for operators exhausted by the challenges of owning an urban restaurant: skyrocketing leasing rates, astronomical operating costs and fierce competition among chef-driven concepts.

“It’s not uncommon to see rent cost half as much in the suburbs as it does downtown,” says Dan Simons, founding partner of Farmers Restaurant Group, which runs three Founding Farmers restaurants and Farmers Fishers Bakers in the Washington, D.C., area. “The question to ask is, ‘Can you double the business downtown that you would in a suburb?”

That depends. While many suburbs have the usual rows of mega chains, the spending power and cultural values can change from place to place. For owners of city restaurants, heading to affluent communities where their diners live can be a sound bet. For example, Geoffrey Zakarian of “Chopped” fame, is planning a Greenwich, Connecticut, location for his New York-based The National, this fall.

“There’s plenty of room for the smart restaurant operator in suburban locations,” says consultant Mario Ponce of Chicago-based Partners in Hospitality. “The restaurant operator will have an advantage if they understand that the value-price relationship is driven by excellent good food and drinks with a strong culture and ambiance to match.”

Four years ago when Simons wanted to expand his health-conscious Founding Farmers concept, he searched for area locations flush with chiropractors, alternative-medicine clinics and personal trainers.

"...with all the competition in the city, the suburbs are where you can find a niche and stand out from the crowd."

“We were looking for communities that had an interest in health and nutrition,” he says. “If we made a vodka and orange juice, we wanted to find people who cared that we use fresh-squeezed orange juice and organic vodka.”

His strategy paid off. The second location in Montgomery County, Maryland, was an instant hit, becoming the foundation for launching a third in the D.C. suburb of Tysons early this year. Dirt-cheap real estate also lured Chef Pascal Chureau to the suburb of West Linn, Oregon, to open his restaurant, Allium, which cost about one-third less than the price tag in nearby downtown Portland.

Instead of competing with the many farm-to-table restaurants in Portland, Chureau tapped into West Linn’s many locavores. Reduced portion sizes and lower prices worked for his customers’ budgets, while simple bar bites and more sophisticated dinner fare appealed to their taste buds. “I was the first one in the area to try something like this,” Chureau says. “And that made a real difference.”

Suburban diners are becoming more adventurous, but value and variety remain the top menu priorities in most markets.

“Today, it’s not unusual to find people going out to eat two or three days a week,” says Chef Dean James Max of Parallel Post in Trumbull, Connecticut. “Suburban diners want to eat well, but still stay within their budget.”

Pricey steaks and expensive seafood options guarantee returns for special occasions, but Max says creative entrees in the $13 to $15 range can generate rapid repeat visits. Dishes like a $15 wahoo and short rib faro “fried rice” hit the right price, while also differentiating his restaurant from nearby chains.

“In the suburbs, you have to work up to that ‘I trust the chef moment,’” Hozinksy says, adding that diners are hooked once they taste a dish.

In the city, small restaurants with tight dining spaces and minimal curb appeal can make it on volume. In suburbia, bigger can be better. After success in Dallas, Chef-owner Kent Rathbun turned to the Texas suburb of Plano to build an outpost of Jasper’s, a barbecue concept that ranges from Dr Pepper-braised lamb shank to wood-rotisserie prime rib. Rathbun built an 8,800-square-foot behemoth packed with themed rooms, including an outdoor patio, an enclosed re-creation of a typical suburban backyard deck and a dining room guised as a picnic area.

“We wanted to go where there was a lot of chain restaurants so we would stand out,” Rathbun says. “In these outlying communities, (Jasper’s has) become their gem.”

Jasper’s concept and location appeals to local families, but the area’s large concentration of corporate campuses, such as J.C. Penney and Cinemark Holdings, has increased private dining. Jeremy Fitzgerald also hit the mark after opening his first successful Bar 145 in Toledo, Ohio, four years ago. He launched four others in Ohio, including a Columbus suburb and a community outside of Akron. The locations allowed for the space to fuse together three concepts: an upscale burger shack, sports bar and a live music venue.

“I want to go into areas where I can fill a void,” Fitzgerald says, “And with all the competition in the city, the suburbs is where you can find a niche and stand out from the crowd.”

Peter Gianopulos is a critic for Chicago magazine, an adjunct professor and freelance writer.

Far From the Maddening Crowds

2. Park It: Free parking is an essential, but valet parking and spacious, brightly lit parking lots create a sense of safety and convenience for older diners and families.

3. Show Off Your Chef: The more your executive chef gets out of the kitchen, the better. Engage diners with table visits, cooking classes and custom recipes for special events.

4. Get Social: Determine which social channels your customer base prefers and jump in, whether it’s Instagram photos of your daily specials or exclusive offers for Facebook followers.