What’s the quickest way to lose a chef’s respect? Use a garlic press, a hard-boiled egg slicer or other lame single-use gadget.

How to impress? Take an existing tool and repurpose it, making it better and more useful, such as hammering a spoon into a spatula. Flat, it stirs like a champ and picks up just enough of a dish for sampling.

Maybe it’s the inner MacGyver that itches to create something outrageously useful out of the unassuming or just an innate refusal to be homogenous. These five chefs “hacked” their way to kitchen innovation and couldn’t be more pleased with themselves.

Combs blows through two pounds of garlic per day at his Italian trattoria. He needed a better, faster way to slice the cloves. A truffle slicer solved the problem.

“It’s kind of a chef’s secret,” Combs says. “It’s consistent and cuts the amount of work in half.” The tool, which looks like a miniature mandolin, is perfectly designed to tackle paper-thin slices. While this kitchen hack works wonders on garlic, Combs suggests a separate slicer for truffles. 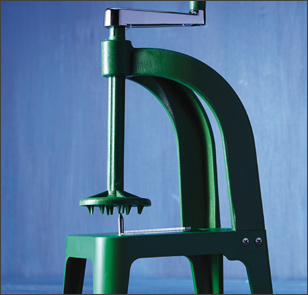 The cooks use hundreds of ingredients and garnishes to turn out intricate modernist dishes for their tasting menus. One dish features a fried potato net fashioned out of countless thin potato strings that accompanies buffalo tartare topped with microgreens from the restaurant’s indoor hydroponic farm.

But those potatoes aren’t cut by hand. “We have a Japanese spiral cutter,” explains Farina. “Normally, you crank it and it takes forever.”

Farina, an experienced wood carver, came up with a quick fix: replacing the slicer’s handle with an electric drill and going to town. “Stuff that would take 10 minutes takes 10 seconds,” Farina says. The repurposed tool can also cut other ingredients into long ribbons, such as carrots for the restaurant’s carrot “pasta.”

Hill turned his equipment hack into a patented product. “In the restaurant kitchen, 30 seconds of time saved is an eternity,” he says. Shaving cooking time inspired The Chef’s Press, a stainless steel vented meat and seafood press that now retails nationally.

“It’s the renewal of a very old idea: pressing food,” says Hill. Frustrated with soggy results from the cooking presses that collect steam on the underside of a flat, solid device, Hill teamed up with a metalsmith friend in San Francisco for a custom design. Turns out, it was a shortcut worth selling.

The key is proper weighting, a built-in handle and vents that let steam escape from the food as it’s cooking. It allows the crisping of skin on fish and helps cook steaks and chicken breasts faster and more evenly. “It acts like a spare hand,” Hill says. “It holds that protein flat and gives you more time to prepare your vegetables.” 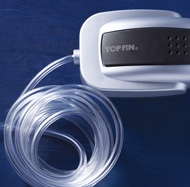 McCaskey has been making bubbles, foams and espuma for years. “The easy way is to use a stick blender and add soy lecithin to make it bubble. Once the foam bubbles, add some xanthan gum to make the bubbles more stable,” he says. But the foam must be made right before plating the dish, which isn’t efficient.

The prospect of constant bubble and a tip that Spain’s mastermind Chef Ferran Adria had been experimenting with air pumps led McCaskey to an aquarium store. An aquarium bubbler, it turns out, makes perfect froth on demand. “We take whatever we want to froth, leave it in a little metal pan and drop the hose down to the bottom.” It’s easy to clean, inexpensive and makes the kitchen run faster.

Churning out innovative food in a kitchen the size of a shoebox is already a huge challenge for Carlisle and his team. But spending more than $100,000 to tunnel through seven stories of the building for a stovetop’s ventilation? Unfeasible. “To put in a hood would have cost me twice as much as we spent to build the entire restaurant,” Carlisle says.

A makeshift flat top makes his restaurant possible. Four surplus warmer burners purchased from Quiznos topped with conductive baking steels from Modernist Cuisine create a cooktop. “Without this, we can only put one pot on a burner at a time. But if we put this thing on, we can run six pots at a time,” Carlisle says. Total investment? About $1,000.