Spaces where multiple food vendors share a roof are nothing new in Europe or Asia. So why all the stateside interest now?

Part of it stems from the evolution of modern dining: giving people innovative options in a casual environment. The crowds that gather at food truck parks in cities like San Francisco, Austin, and Portland, prove that putting a critical mass of local food businesses within a space where people congregate is a winning formula.

While interest in food trucks exploded during recession years, today’s rebounding economy has introduced opportunities for entrepreneurs to get in on brick-and-mortar places. For real estate developers, a food hall is like offering a new building amenity, and many are willing to make terms more favorable to attract restaurant operators.

A prolonged wait for building permits on a depressed block of Market Street in San Francisco prompted Tidewater Capital & Warhorse Development, a private investment and real estate development firm, to use the space as a temporary food hall in the interim. After partnering with Mercer Restaurant Group to manage vendors, the developers opened The Hall in October 2014. In the first year, 150,000 people visited the operation.

“The shared economy is a growing trend that transcends the food world,” says Matt Semmelhack, owner of Mercer Restaurant Group, adding that the food hall may find a permanent home nearby. “The idea of having a critical mass of options in one place, that won’t go away. That’s not a newfangled trend. It’s a proven idea.”

Curated food options can raise the profile of retail spaces. Flagship Commons, a food hall with farm-to-table concepts, replaced the dated food court at Westroads Mall in Omaha, Nebraska, to give shoppers more reasons to visit the mall.

“The whole angle here is to create a more social experience,” says Nick Hogan, CEO of the Omaha-based Flagship Restaurant Group, which runs Flagship Commons. “[The mall owners] are making terms more favorable to restaurant guys. It is a shift. It’s surprising that it’s taken so long to happen.”

Kate Leahy is a San Francisco-based writer and cookbook author who would never pass on an opportunity to eat at a food fall. Follow her on Twitter @KateLeahy. 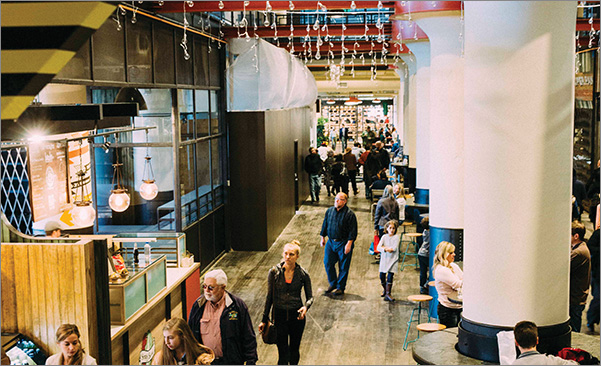 The number of food halls in the works is extensive, from Portland, Oregon, to Portland, Maine. Some deals have been inked, like one in Dallas, but a build-out hasn’t started. Here are some of the latest.

New York: Gotham West Market. With outposts of hotspots like Ivan Ramen, the popularity of this new late night food hall proves that there is plenty of room in New York for more like it. 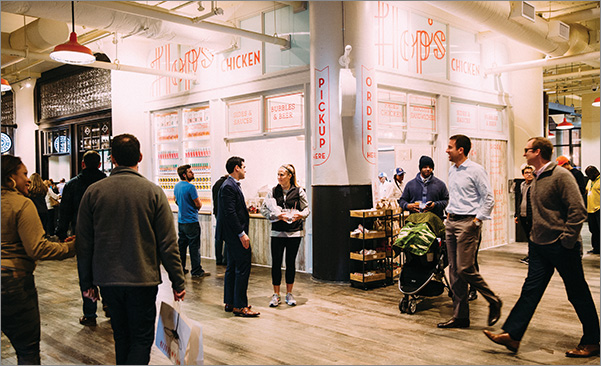 The Guts of a Food Hall

No single formula provides the success to food halls, but these components keep operations running and people coming back for more.

Diverse options and homegrown ideas draw customers for multiple visits. At the newly opened Central Food Hall at Ponce City Market in Atlanta, concepts by James Beard award-winning chefs from the South, such as Linton Hopkins and Sean Brock, headline the options.

Delivery issues? Leasing questions? Cleaning crew oversight? These are some of the matters that a market manager, such as Tiffani Emig of the Boston Public Market, juggles daily.

Vendors need to be prepared for operating in tight spaces, like 300 square feet with limited appliances. A communal kitchen can help ease prep pressure.

Food halls often require vendors to share large appliances like ice machines. Cooperation becomes key. When the machine goes down, Rappahannock Oyster Bar at Washington, D.C.’s Union Market has a fix: Its manager orders a truck of ice for other vendors.

Decades-old food halls, like the Ferry Building Marketplace in San Francisco, require vendors to provide seats for guests. Newer food halls have a range of private and communal seating options. Friends can buy food from different vendors but eat together.

Drawing customers into the kitchen can get people more excited about food and build a community of cooks. In Las Vegas, DW Kitchen & Market, a food-hall offshoot of restaurateurs Bryce Krausman and Dalton Wilson’s DW Bistro, reserved part of its 7,721-square-foot space for a hands-on teaching kitchen.

Food halls encourage people to hang out, so a bar can help draw crowds. At San Francisco’s The Hall, the bar is staffed by the management team, Warhorse West Hospitality, which tailors the wine and beer menu to complement the vendors’ menus.

Food halls are all about a sense of place. A defining characteristic of the Boston Public Market is to offer food grown or made in Massachusetts or the rest of New England. Market organizers work with prepared food vendors to find ways to source locally.