If you’re curious how advances in AI and robotics might fundamentally transform the restaurant industry, consider what happened at a CaliBurger location in Pasadena last summer.

In the restaurant’s kitchen, a machine named Flippy—using thermal sensors, cameras and special attachments—cooked a hamburger almost entirely by itself. First, a cook placed an uncooked burger onto a grill. Flippy flipped it over as it monitored its internal temperature, and then alerted one of its human “assistants” it was time to apply a slice of cheese and send it on its way.

“We wanted to show that it’s possible to leverage technology to leave the dull, dirty work (in restaurant kitchens) to robots and free up chefs to work on tasks that improve the dining experience,” says David Zito, CEO of Miso Robotics, the California startup that created Flippy.

But this is about more than just flipping burgers. Restaurants are beginning to use robots to measure ingredients, toss salads and spread marinara sauce on pizza dough in hopes of cutting costs and creating backof-the-house efficiencies.

Thanks to the growing interest in everything from driverless cars and drone deliveries to cashless operations and selfordering kiosks, it seems almost inevitable that robots will impact foodservice as well.

Deepak Sekar, founder and CEO of Chowbotics, the San Francisco startup that created a salad robot, believes that food will be at the heart of the next industrial revolution. “Today, several industries have become more efficient by using automation. One of the last major industries that has not seen these improvements is foodservice,” he says.

The question being pondered now is just how much help—if any—tomorrow’s kitchen robots will need from their human sous chefs.

Evaluating the Impact
Contrary to the media hype on robots replacing humans, only a handful of operators are using advanced automation in their kitchens. Typically, they’re small pilot projects used to test feasibility, often for food prep.

Chowbotics started taking pre-orders for its salad robot this spring; Miso Robotics went back to the lab to tweak Flippy after its proof-of-concept shift at CaliBurger and is targeting 2018 for its commercial rollout. Meanwhile, startup companies like Zume Pizza are testing robots in single-unit restaurants while Eatsa, a self-ordering, automat-like fast-casual quinoa bowl concept, has been tweaking its menu.

“There are certain less-skilled tasks in the kitchen that have to be done to prep for service and that kind of repetitive prep work can be taken over by machines,” says Karen Malody of Culinary Options, Oregon. But Malody questions whether a surge of fully automatic innovations will occur soon.

A recent report from the McKinsey Global Institute supports that idea, noting that less than 5 percent of occupations could be fully automated using current technologies, but almost every occupation has the potential to be partially automated. Even partial automation, the report notes, could save almost $15 trillion in wages.

Still, Sekar believes widespread adoption of robotics in foodservice is not far off. “In the next five years,” he says, “we expect many foodservice establishments to begin using robots to make their operations more efficient.” 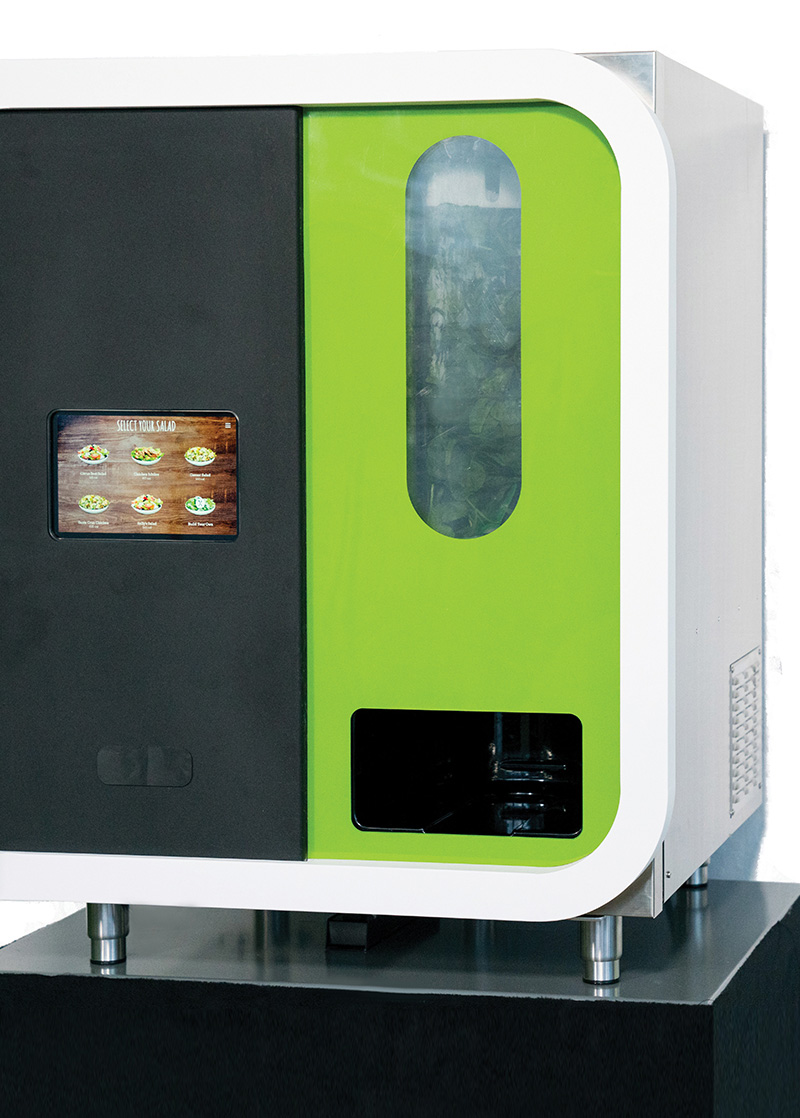 Change Comes at a Cost
Current robotic innovations tend to focus on completing specific tasks, such as making a salad or flipping burgers. The singular focus of these machines means operators would need to invest in multiple pieces of equipment to automate the entire kitchen.

Though companies declined to provide specifics about the costs of their robots, Malody estimates the innovations price tags are upwards of $30,000.

“You need enough capital to invest in this kind of technology,” notes Malody. “But if you have a high-volume business, you could see a return on investment very quickly, especially in the back of the house where robots can improve speed and efficiency.”

It’s not just the cost that needs to be considered. Robots won’t need breaksor have to call in sick, but Zito admits software malfunctions and repairs might be needed. He estimates it will take
years before foodservice robots are 100 percent reliable. 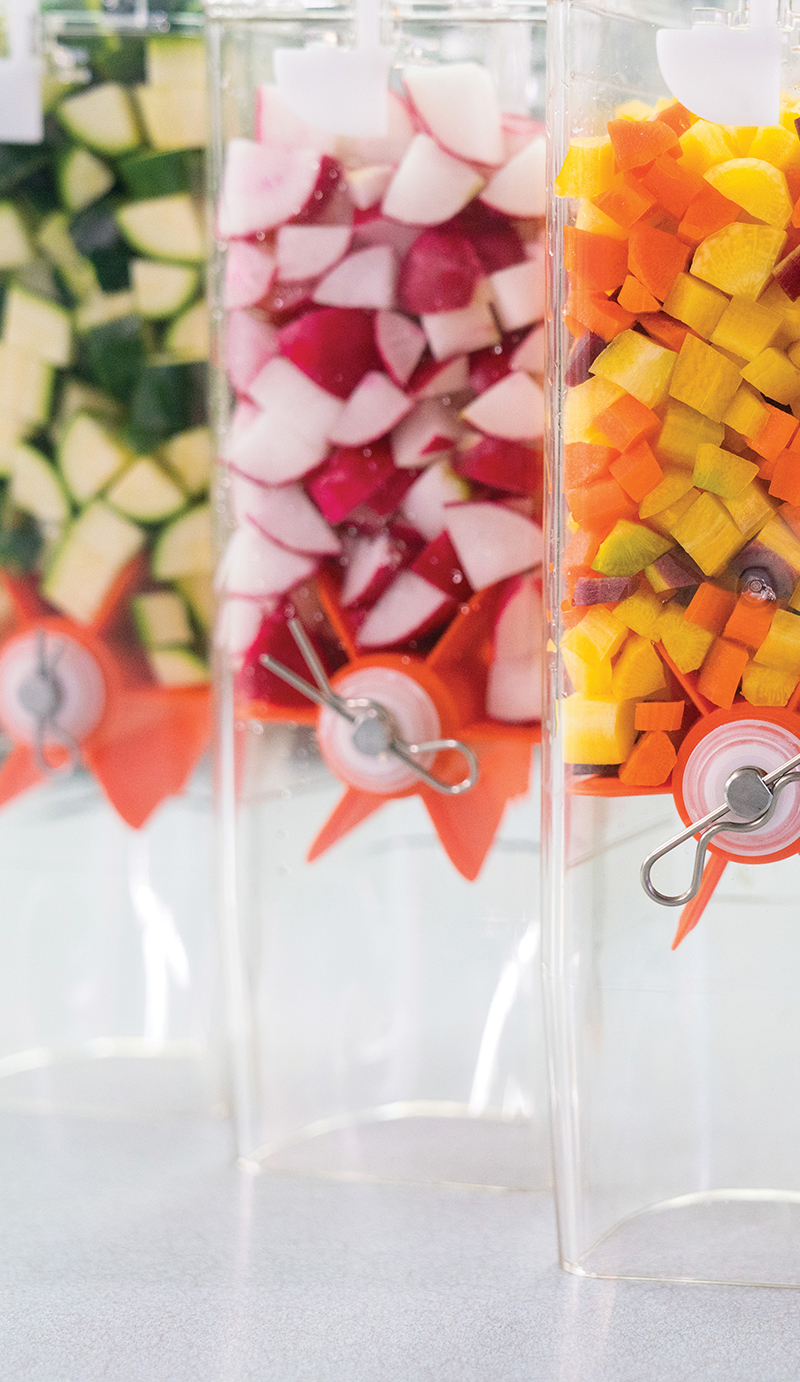 “Because wages are rising so fast, there is a lot of pressure on fast-casual restaurants to automate the customer experience,” says Anil Bathwal, who opened The Kati Roll Company in 2002. Bathwal has used technology to track revenue and expenses, while also adding online ordering and selforder kiosks. “If the restaurant can run better through technology, it makes sense to adopt it.”

But Bathwal’s street food concept is more complex than tossing a salad or flipping a burger, leading him to believe that robots wouldn’t have a place in his kitchens.

“We’ll need to use some automation for scale, but our entire concept is based on making our food by hand,” he says.

Even if robots become standard in the back of the house, Zito believes restaurants will always need talented staff in the kitchen to experiment with new ingredients, create menus and taste dishes—at least in the foreseeable future.

“With AI, the hype is so far ahead of the technology,” he says.