Seating customers cheek-to-jowl during peak hours only goes so far as a way to grow revenue. To take full advantage of square footage, some operators are breaking down walls, learning new business models and serving entirely different experiences—on the side.

Creating a restaurant within a restaurant isn’t uncharted territory, but it’s proving to be a fiscally savvy move.

In some instances, the success of an offshoot eclipses the original. When Chef José Andrés turned the second floor of then-restaurant Café Atlántico into his experimental Minibar by José Andrés in 2003, snagging one of its six seats became the hardest reservation to score in Washington, D.C. (Café Atlántico reopened as pop-up restaurant America Eats Tavern this year.)

“Oftentimes, the space is the opportunity and you create something that works within it.”

Several advantages come with opening a restaurant within an existing infrastructure:  shared kitchens, bathrooms, and dish rooms. New staff hires are minimal. And the concepts can often share one liquor license.

“There’s a real way to capture every bit and sell it,” says Chef-owner Greg Hardesty, who runs two restaurants, fine-dining Recess and casual Room 4, out of the same location in Indianapolis. “You’re always chasing that tiny margin, so if you can expand your margin without spending more money, you do it.”

Hardesty learned the value of running a casual concept adjacent to a fine-dining restaurant when working for Chef Dieter Puska at The Glass Chimney in Carmel, Ind. Puska allocated prime cuts for The Glass Chimney while turning trimmings into stews served next door at his casual place, Deeter’s Nasch & Nip.

Offshoots also provide chefs with creative outlets. “We’re always looking for ways to express ourselves, and for new concepts to develop,” says Tim Hockett, a division chef-partner at Chicago-based Lettuce Entertain You Enterprises. Hockett has opened several restaurants-within-restaurants for the company, including casual Pizzeria Via Stato in the former bar of Osteria Via Stato. His biggest recent hit is M Burger, a burger counter that first opened in the pastry kitchen of the fine dining restaurant, Tru.

For restaurateurs interested in transforming unused space, concept is key. Extensions make sense (Italian restaurant with an offshoot focusing on pizza) or juxtaposition of opposites (such as fine dining and quick service). The concept also has to make sense and be clearly different from the existing restaurant—but with a caveat.

“You need to do whatever feels authentic and organic to the team involved,” Hockett says. “I wouldn’t try to force a sandwich or sushi place in a restaurant just for the sake of doing something different. It’s about the team and what they are good at.”

On the menu: pork carnitas with onions, avocado, queso fresco, and salsa verde

Room 4, Chef Greg Hardesty’s casual restaurant was born from the idea that two restaurants in a space are better than one.

Before Hardesty opened fine-dining Recess in 2010, he signed a lease comprising three storefronts. He remodeled two spaces, turning them into one, and left the third, a former convenience store, vacant. Eight months after paying rent on a room full of cobwebs, he broke down the wall, added 22 seats and a small kitchen with a flat-top griddle and four burners. Thus, Room 4 was born with a menu Hardesty describes as after-hours chef grub.

“At the end of the night, chefs want salty, spicy, substantial food,” he says. “It’s my take on coming home and opening up the refrigerator.”

Fifty percent of the food cost is shared between both restaurants. Remnants from sea bass at Recess become fish tacos while meat trimmings are ground for burgers or cooked into carnitas. The fryer, oven, and dish room are shared.

This year, Hardesty expects combined revenue for the restaurants to top $1 million. He’s also thinking of moving Room 4 into the larger dining room to better accommodate a growing number of regulars. “It has opened up my demographics,” he says.

On the menu: M Burger (hamburger served with bacon, cheese and special sauce)

Tim Hockett’s epiphany came in late 2008 while sitting at the chef’s table in the 800-square foot pastry kitchen at Tru, a destination restaurant in Chicago’s Gold Coast.

Fine dining restaurants everywhere were feeling pressure to fill seats during the recession, and Hockett was brainstorming ways to use the pastry space more effectively. While watching crowds walk by during lunch, a spark flew. What if this corner of Tru was converted into a lunch space?

“At the time, I had just fallen back in love with burgers,” Hockett explains. Because it would be an unexpected move for a restaurant known for its tasting menus, “a burger concept would grab a quick audience and deliver a shock to the neighborhood.”

M Burger (M for Chicago’s famed Michigan Avenue) sold nearly all of its first 500 burgers opening day, and now griddles 1,200 burgers daily, along with hefty amounts of fries and shakes.

The quick-service burger concept required a modest remodel (a wall dividing M Burger from Tru, which is partially glass, as well as construction of a street entrance) and an investment in new equipment, such as a griddle and fryers. Tru accommodated spillover food storage, moving its pastry department to the restaurant’s main kitchen.

Hockett believes that the symbiotic relationship between burger counter and haute cuisine is mutually beneficial, adding that business has picked up at Tru.

“The chef at Tru, Anthony Martin, he watches out for us," Hockett says. "And we watch out for him.”

On the menu: duck rillettes with croutons 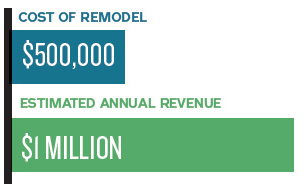 For years, One Market used an atrium adjacent to the restaurant to accommodate large private dining events. But the space lacked the polish of the Michelin-starred restaurant. When the building’s landlord asked Michael Dellar, founder of San Francisco-based Lark Creek Restaurant Group, for ideas on transforming the area, Dellar took the bait.

“Oftentimes, the space is the opportunity and you create something that works within it,” Dellar says.

Dellar decided the 1,700 square-foot atrium was better suited for retail than a restaurant. At the same time, he wanted a space that would draw people but maintain the essence of the establishment.

The solution became Wine & Wall, a retail wine shop, wine bar and art gallery, which opened in June. The remodel required new walls to display art, cubby holes to showcase wine and wine-related merchandise, card-operated wine dispensers, and a bar and lounge area. The restaurant group hired two employees with gallery and retail wine experience, and in the evenings, the space still accommodates private events, up to 100 people.

At Wine & Wall, bowls of almonds and olives and rounds of cheese are displayed alongside a rotating selection of wines, all of which feature artistic labels. Terrines and pâtés are made at One Market and served next door.

“There’s synergy between Wine & Wall and One Market,” Dellar says. “We tell our guests that if you’d like to follow your wine tasting with a meal, step 100 feet to the door.”

Kate Leahy is an Oakland, Calif.-based writer. She has written three cookbooks, including The Preservation Kitchen, with Chef Paul Virant.