Within a decade, the majority of seafood will come not from open waters, but from fish farms. And not just the kind most diners think. Some of the best-tasting and most sustainable seafood in the world is currently raised on land. As awareness grows among environmentally minded chefs and restaurants, land-based aquaculture is poised to explode.

“The processors and distributors get their fish the same day they’re harvested,” says Steve Summerfelt, director of aquaculture systems research for Freshwater Institute, a nonprofit aquaculture operation and pioneer in land-based fish farming in Shepherdstown, West Virginia – some 60 miles inland from the Chesapeake Bay. “The biggest selling point was that it was local,” he says.

While great strides have been made to address overfishing in the face of increasing demand, seafood watchdog groups like Monterey Bay Aquarium say that the world’s oceans are still being depleted. Aquaculture produces about half of the world’s seafood – a figure which will only grow, now that it’s the fastest-growing form of food production in the world, according to the National Oceanic and Atmospheric Administration.

Land-based and farm-raised aquaculture operations, sometimes called tank farms, have been in production in North America for many years. But last year, land-raised seafood hit a milestone: Monterey Bay Aquarium’s Seafood Watch gave its coveted “Best Choice” sustainability ranking to Atlantic salmon raised in land-based closed-containment farms, making it the only category of Atlantic salmon to receive the honor. This is a big deal, considering that salmon is among the most popular fish to eat in the United States.

Shrimp is America’s No. 1 seafood, evidenced by the fact that the average American consumed more than 3.6 pounds of the crustaceans in 2013. To meet demand, land-based tank farms look increasingly like the future, offering a sustainable, domestic alternative to shrimp sourced from environmentally detrimental aquaculture operations in many parts of the world.

What advantages do closed-containment seafood farms have over the conventional open-net kind? As the name suggests, they’re fully self-contained, eliminating the controversial environmental and biological contamination found in massive coastal aquaculture farms around the globe, including Asia and South America.

These recirculating aquaculture systems – as they’re referred to in the industry – reuse up to 99 percent of their water, compost their fish waste and are sealed off from the natural watershed. The other upside? Land-based operations have the potential to take the notion of “locally sourced seafood” to a new level.

“One big advantage is that you can actually locate them as close as possible to their market,” says Jenna Stoner, a campaign manager at Living Oceans Society, a marine conservation nonprofit.

Closed-containment-raised seafood is poised to give conventionally farmed and even wild seafood a run for its money.

“Typically, when someone mentions farmed fish, I think of a handful of species, all of which taste like corn,” he says. “But this salmon melts in your mouth and has a mild, buttery flavor.”

Regan says his only worry about the product is that the price, which currently falls between organic farmed salmon and conventionally farmed salmon, will likely jump because of increasing demand. “I’m waiting for the other shoe to drop,” he says.

Chef Sean Sanders sings similar praises of the land-raised shrimp he buys for his Chicago restaurant, Browntrout, from a closed-containment aquaculture farm in Indiana.

“They’re able to purge the shrimp before shipping, so you don’t even have to clean them. You’re just getting nice, beautiful live shrimp.” Sanders, an advocate of sustainable agriculture, thinks land-raised seafood could be a boon, particularly for Midwestern chefs like him.

“When you’re a restaurateur in Chicago, getting seafood that’s both local and sustainable can be a big challenge.”

Is land-raised seafood the way of the future? “Some analysts believe that eventually all new fish farming operations will be on land,” says Jo Mrozewski of the land-based aquaculture operation Kuterra, in British Columbia. “And that open-water fish farming will diminish and disappear.”

Until that starts to happen, challenges remain. One of the hurdles for fully sustainable closed-containment aquaculture is changing misperceptions about farmed fish – for example, the incorrect notion that farmed fish is genetically modified. Salmon like those raised at Kuterra or the Freshwater Institute are genetically no different from Atlantic salmon that have been fished in the wild for generations.

Another challenge? “Scaling up production,” says Mrozewski. “We just can’t keep up with demand.”

David McAninch is a freelance writer and contributing editor for Rodale’s Organic Life magazine. Follow him on Twitter @DMcAninch. 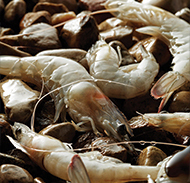 THE ARGUMENT FOR SUSTAINABLE AQUACULTURE