Diners have crossed over to the dark side and chefs couldn’t be happier. The desire and appreciation for authentic global food, many of which construct dishes specifically with dark meat chicken, has been on the rise. So it’s not surprising that chicken thighs have shown the fastest growth on menus compared to other cuts – up 105% over the past four years and 27% over the past year alone, according to food research firm Datassential. That’s welcoming news, especially for chefs who deride chicken’s white meat for being pedestrian and typically costing more than dark meat. For them, dark meat is juicier, deeper-flavored, more versatile and kinder to the bottom line.

But to help diners who remain sheepish about chicken that’s not white, they know it’s on them to continue the trend. Whether it’s jerk chicken, Peruvian pollo or karaage, the Japanese version of fried chicken, making further in-roads lies in showing diners what they’ve been missing for so long.

WE USE THE WHOLE BIRD AND FIND WAYS TO UTILIZE ALL OF IT IN DIFFERENT WAYS.
—Chef-Owner Jimmy Bannos Jr., of the Purple Pig in Chicago

At the Poulet food stall in New Orleans’ Pythian Market, Chef Marlon Alexander uses dark meat to amplify the flavor of his chopped chicken salads and creates chicken versions of traditional Middle Eastern kofta meatballs. “Preparations that require a higher fat contact, like a chicken meatball, need a blend of both white and dark meat to maintain moistness in the cooking process,” Alexander says. “It allows a chef to create moist and flavorful combinations that really shine.” At the Purple Pig in Chicago, Chef-Owner Jimmy Bannos Jr. takes the fat further by confiting thighs and drumsticks to create potent flavors that rival the intensity of flavorful beef. “That part of the bird has the best flavor,” he says. In addition, chicken thighs can add a twist to one of the trendiest – and perennially profitable – offerings: small plates. Dark cuts work better for cold and cured items, like rillettes or the pâtés Chef Tim Keating serves at Urbain 40 in Orlando; it’s also essential for his chicken sausages. “You can stretch profits through the right techniques,” says Bannos. “We use the whole bird and find ways to utilize all of it in different ways. Turning the dark meat into sausage, rillettes or pâté is a great way to show technique and also have a profitable dish.” 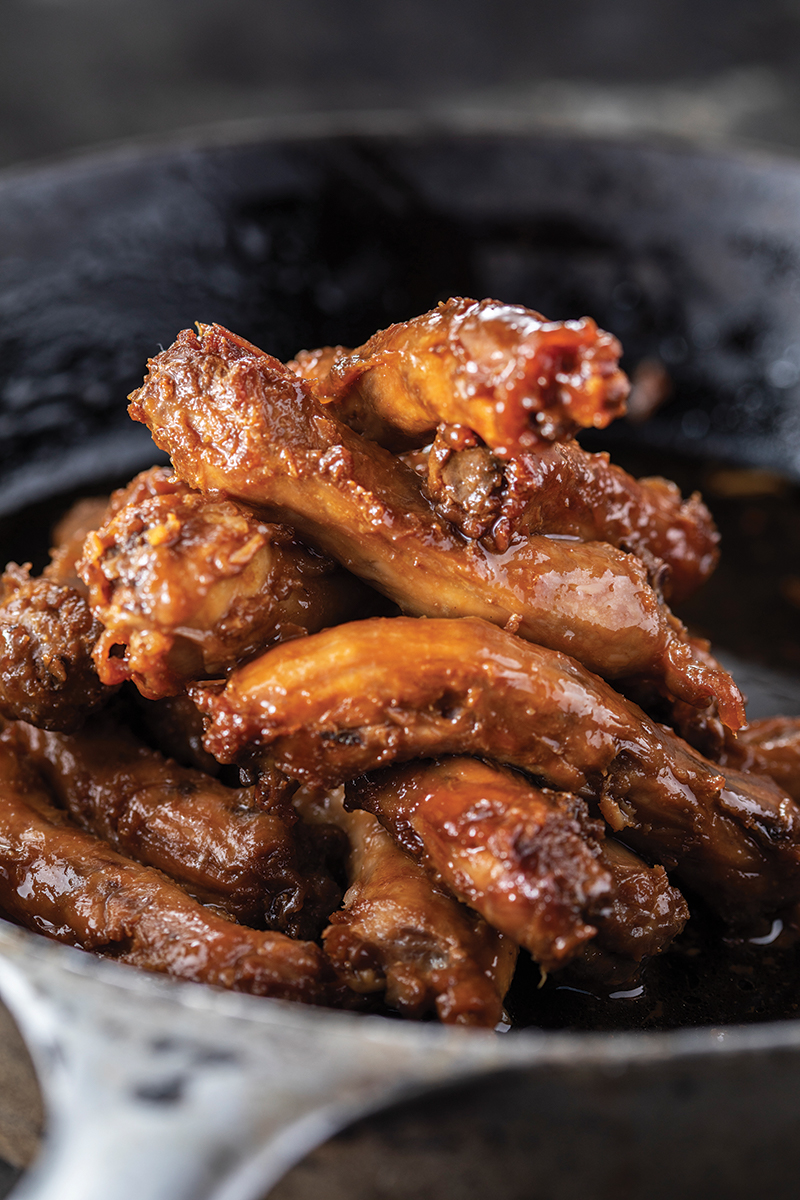 When it comes to dietary considerations, arm servers with evidence that white meat is not always the healthier choice. “We relay to our clients that dark meat has a higher nutritional content and quite a bit more flavor than white meat, with only a negligible increase in fat,” says Parind Vora, chef-owner of Lockhart Bistro and Restaurant Jezebel in Lockhart, Texas. Highlighting a type of chicken, such as air-chilled, which results in a superior flavor and texture, or a particular breed can also be a differentiator. At Jezebel, Vora gilds her lobster risotto with smoked chicken gizzards and poached Silkie chicken thighs. Otherwise known as “black chicken,” Silkies have naturally black skin that, Vora says, produce a unique mushroom-like flavor. “Dark meat is loaded with iron, zinc, B6 and B12,” says Alexander. “If a customer is taking a rounded approach to healthy living, dark meat should definitely be on their radar.”

Chicken thighs have an affinity for smoke, long braises and stews, which make them an easy sell for diners looking for an authentic taste of international classics. At Alto Bajo in Portland, Oregon, where Oaxacan-inspired cuisine reigns, Chef Bryant Kryck uses thighs for his chicken tinga offerings. “Chicken thighs and dark meat take up more of that smoky flavor, and I don’t have to worry about the smoke drying out the chicken as much,” says Kryck. Thighs also allow chefs to experiment with South American dishes without breaking the bank. Peruvian cooking and dark meat chicken, for example, go hand-in-hand, as evidenced by dishes like pollo a la brasa and arroz con pollo. The former is a staple of Chef Brandon Carter’s at Farm in Bluffton, South Carolina. Roasting the hindquarters rotisserie-style showcases the succulence of the dark meat, he says. And at Pisco Rotisserie & Cevicheria in San Diego, Emmanuel Piqueras uses drumsticks for his arroz con pollo with cilantro-beer rice. “Dark meat works better for stews, soups and braising or roasting,” he says. “Most of the time, using these methods with just white meat can easily result in dry meat or lack of flavor.” 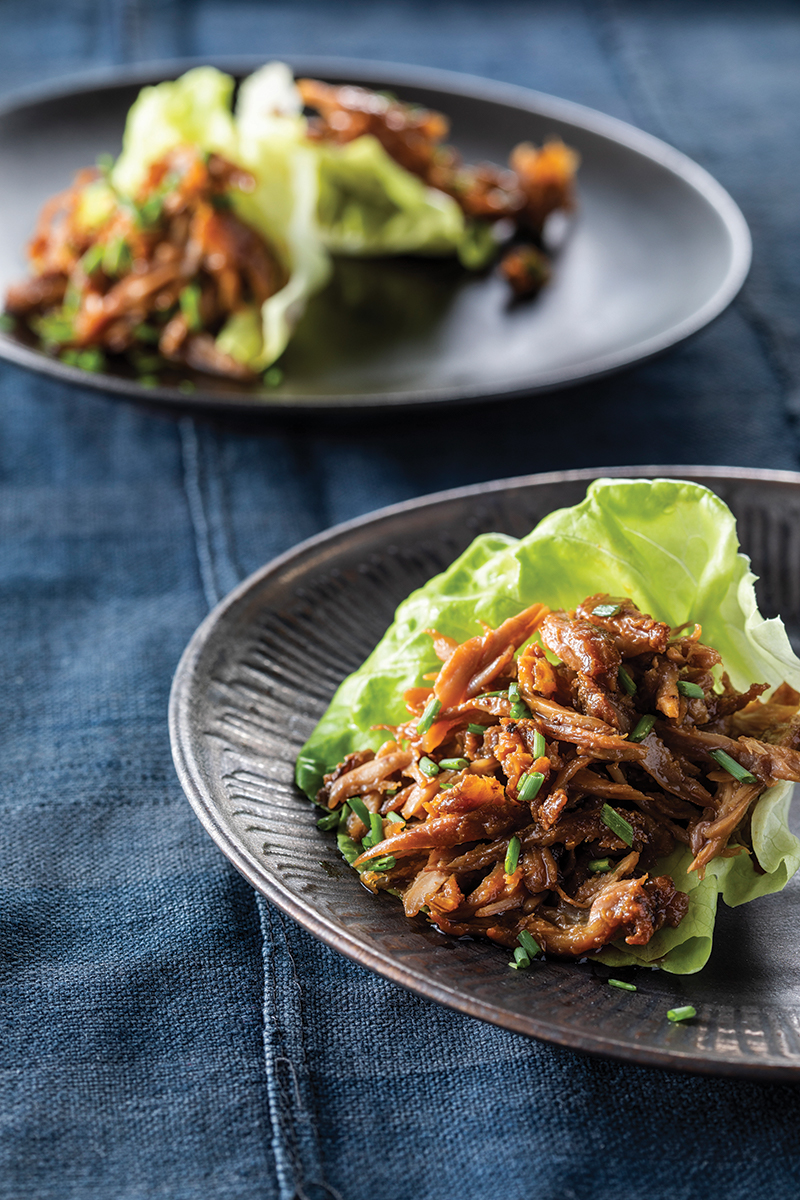 Home cooks tend to appreciate the ease of preparing chicken breasts. Unlocking the tenderness of the harder-working muscles of dark meat takes more skill, which can have a snowball effect on supply and demand for the industry. “Many places lean on the grill and quickly cooked white meats,” he notes. “With greater demand for white meat, it makes the dark meat more affordable,” says Norman Van Aken of 921 by Norman Van Aken in Mt. Dora and Three in Miami. Take fried chicken, for example. Koji and Satori Hagihara, the husband and wife duo at ROKI in New York City, use chicken thighs for their karaage because they cook quickly and yield crispier skin. The same goes for Neal Brown, chef-owner of Indianapolis’ Ukiyo, who prepares karaage with dark meat, in part because “white meat doesn’t respond as well to marinades, becoming more fibrous and tough.” Thighs also tend to retain their flavor when shredded and folded into other dishes. At San Diego’s eclectic Rustic Root, Chef Marcel Childress often smokes and then braises chicken. After they’re cooked, he shreds them and uses the meat to bolster the flavor of everything from salads and pastas to his classic pot pies. Giving thigh real estate on the menu, as the main protein or part of a dish, is essential for engendering change, Childress says.

Now that diners are becoming more accepting of dark meat, why not move further into the dark side? There are benefits of adopting a beak-to-feathers approach (gizzards, bones and back meat) – cutting costs, reducing restaurant food waste and delivering one of-a-kind flavors.