❯ As far as Scott Campbell is concerned, meat fat is a kitchen superstar for basting, boosting flavor and enhancing texture.

“It never disappoints,” says Campbell, the executive chef at Butcher & Banker in New York City. “A little duck fat or tallow, it’s like having the 64-color box of crayons. There’s nothing it can’t do. But for a while, it wasn’t something diners wanted to know about. Fat was a little scary.” 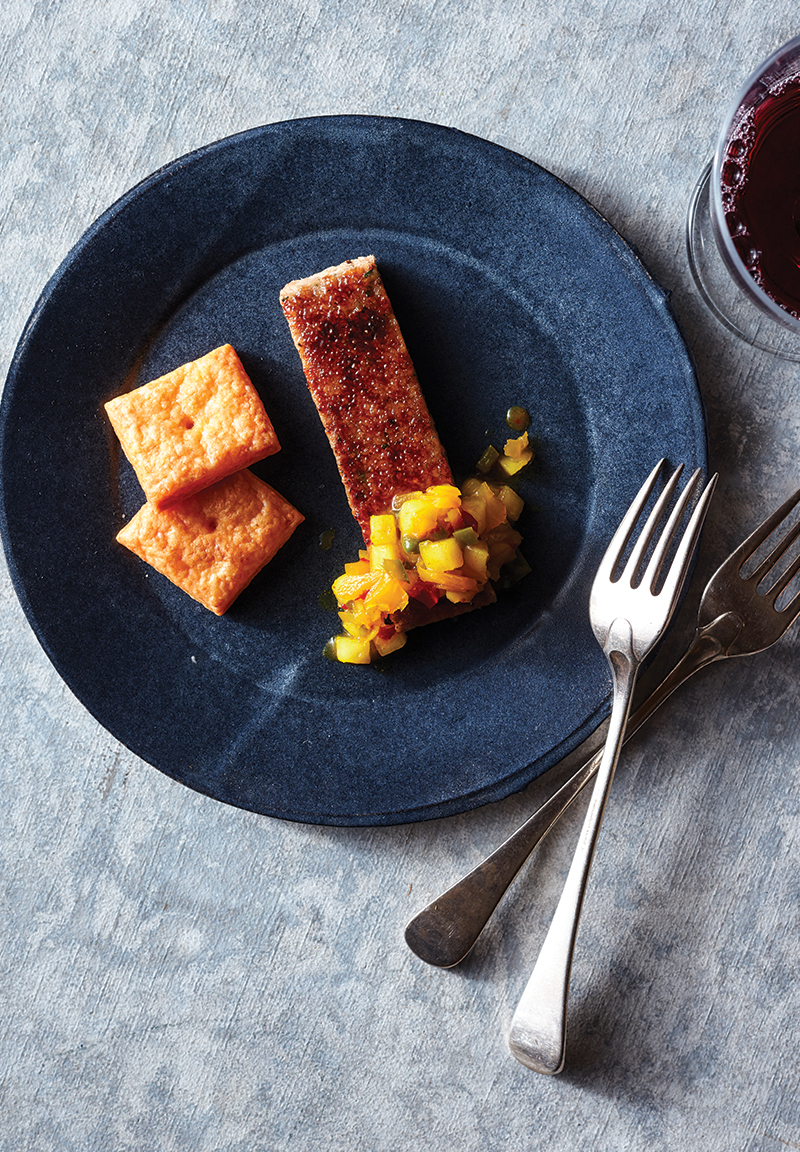 After some nutritionists declared fat as verboten, many diners shunned it, too–while olive oil became the new golden child. “You couldn’t even say the word ‘lard.’ much less use it,” recalls Campbell, who calls on it with abandon. He renders tallow from the trim of aged prime beef for basting and glossing steaks, caramelizes onions in schmaltz, and makes “pulled” short-rib tacos in smoked beef fat, almost like rillettes.

Thanks to nose-to-tail eating and a spike in high-protein, low-carb diets, chefs across the country are once again experimenting with everything from marrow to duck and goose fat–as well as lard, schmaltz, tallow, suet, drippings, caul and even lamb fat. Whether it’s Chef Isaac Toups’ confit chicken thighs with collards at Toups’ Eatery in New Orleans, or Chef Ori Menashe’s roasted bone marrow spinach gnocchetti with citrusy bread crumbs and aged balsamic at Bestia in Los Angeles, fat is producing deeply flavorful and richly textured dishes that appeal to the carb-conscious and carnivores alike.

Pick a Fat, Any Fat

Gio Osso, chef of Virtu in Scottsdale, Arizona, can’t imagine not taking advantage of meat fat. “It’s a flavor bomb that explodes in your mouth,” he says. “We’ll do grilled asparagus tossed in 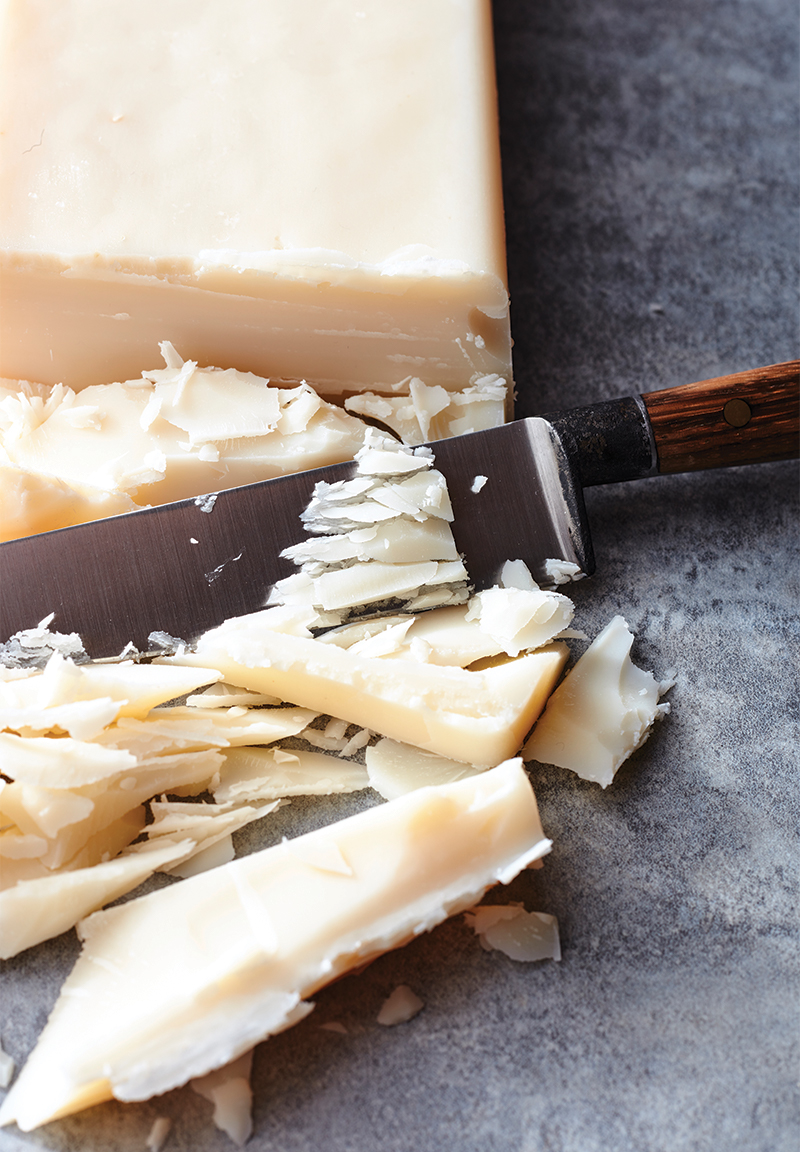 garlic butter and topped with a duck egg, candied bacon and foie gras hollandaise.” His spin on eggs Benedict relies on foie fat rather than butter for its silken finish. He also confits short ribs in beef tallow. “It gives a beautiful texture and really beefy flavor,” notes Osso. “Guests say they taste beef instead of braising liquid.” He’s also served lamb braciole, which is stuffed in a traditional Neapolitan way and then cooked in rendered lamb fat. “I didn’t order enough last time,” he says. “We ran out halfway through Saturday night.”

New to Osso’s lineup is fat rendered from duck breasts that have been house-smoked over hay, coffee beans or fruitwood. He uses it for a dressing, mixing it with sherry vinegar. “It’s great with swordfish collars, cut with a bone to look like tomahawk steak,” he says.

Trevor Hoyte of Machine, in Chicago, also reaches for foie gras to enhance a seemingly simple preparation of mussels in broth. “The foie melts and brings roundness and complexity. It doesn’t hit you 100% that it’s from foie gras, but it takes the dish to another dimension, bringing an almost umami-like quality.” To keep the richness in balance, Hoyte finishes the dish with pickled fennel. “The acidity adds balance,” he says.

At Geraldine’s in Austin, Texas, Chef Stephen Bonin’s pig face candy bar has been a surprise hit. A rustic, country-style pâte made from pig head is formed into logs and cut in little uniform rectangles. A bruléed sugar finish adds a bittersweet counterpoint to the rich base. 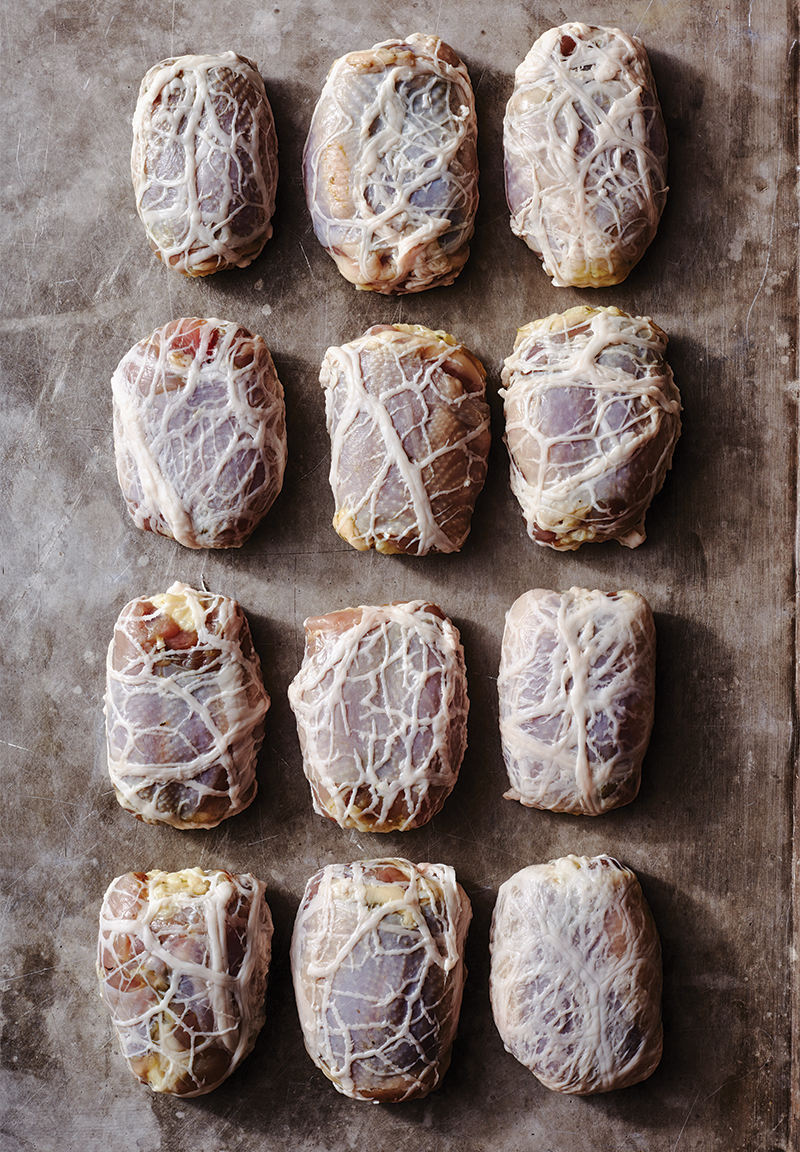 Erik Niel, chef-owner of Easy Bistro & Bar and Main Street Meats in Chattanooga, Tennessee, wasn’t taught to work with anything but butter in his early years, but when he made a pie crust with leaf lard, he became a convert. “As a Southern boy, it’s hard for me to say this, but even my mother taught me wrong,” he admits.

Inspired by Emeril Lagasse’s “fat is flavor” mantra, Niel often uses lard and tallow, in part because they’re by-products of the butchering he does at Main Street Meats. He also uses duck fat to make simple sautés and wraps proteins in lacy sheets of caul fat. “I love what caul fat does, melting entirely into the sausage, leaving incredible flavor,” he says. 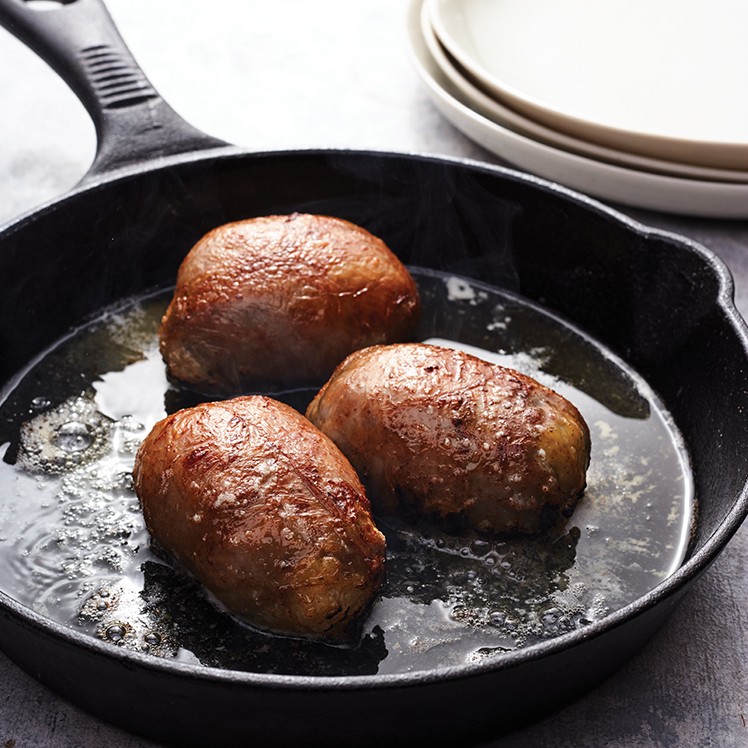 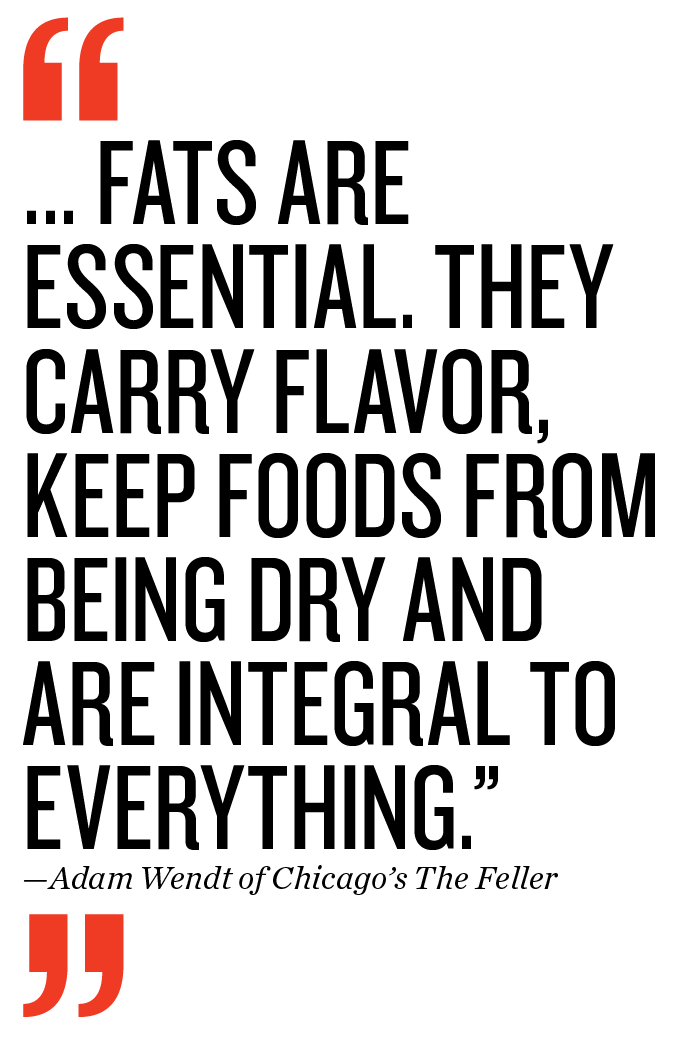 Meat fats aren’t limited to preparations. Chef Adam Wendt’s fried duck fat chicken nuggets served with garlic-ranch and honey-Dijon dipping sauces were an instant hit when The Feller, inside the Spilt Milk Tavern, opened in Chicago. “They’re super moist and juicy, with strong poultry flavor. The duck fat puts them exactly where we want them to be,” Wendt says. He also adds duck fat to sherry-onion jam that tops cheeseburgers, while rendered tallow is earmarked for gussied-up gorditas. “Thing is, fats are essential. They carry flavor, keep foods from being dry and are integral to everything,” says Wendt. “For chefs, meat fats are right up there with salt as an indispensable ingredient.”

Deneb Williams, CEO and chef of WM Restaurants in Sacramento, California, including its flagship restaurant Allora, is such a fan that he describes animal fat as both as an ingredient and technique. “When you talk about infusing foods with flavor, good culinary fat really is the best,” he says. “It’s worlds better than hydrogenated oils, purer and healthier. Any day of the week, I believe people want real food. It leads people back to what is natural, and that’s always better.”

As a Matter of Fat

The saturated fats found in meat have long been blamed for a litany of health problems, but Nina Tiecholz, adjunct professor at New York University and author of “The Big Fat Surprise,” insists it’s largely unfounded hooey.

“Saturated fats have been unfairly vilified, and do not cause heart disease the way they’ve been portrayed,” she says, adding that this hypothesis, which emerged in the 1950s, hasn’t been scientifically proven, despite testing in rigorous trials. “But we’ve believed it for so long that there is a whole system of recommendations around it.” Indeed, a 2014 article in the Annals of Internal Medicine concurred, saying it had found no evidence to support guidelines that say people should restrict saturated fat consumption to lower their risk of heart disease. 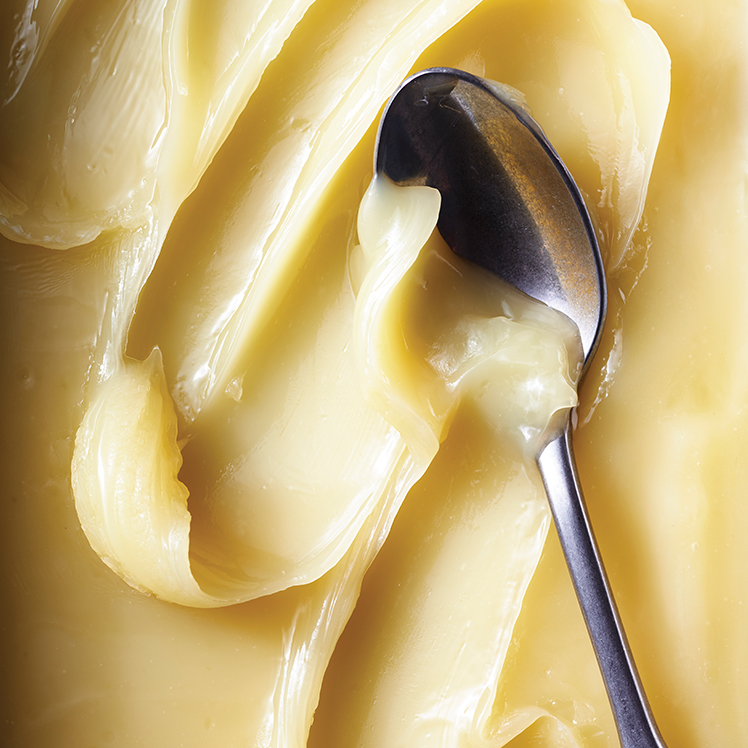 Whether it’s wise to call out specific fats on a menu has always been up for debate. While duck fat fries always seem to draw crowds, Butcher and Banker’s Scott Campbell doesn’t specifically mention that his steaks are basted in beef fat or that his short ribs are confited in smoked fat: “If someone asks, our servers describe the preparations and ingredients. But the truth? Sometimes they’re happier if they don’t know.”

Easy Street’s Erik Niel says if you don’t see it on the plate, it doesn’t have to be mentioned on the menu: “I’m old school. If there’s something you don’t put in your body, you tell me rather than the other way around. I’m here to make it good.”