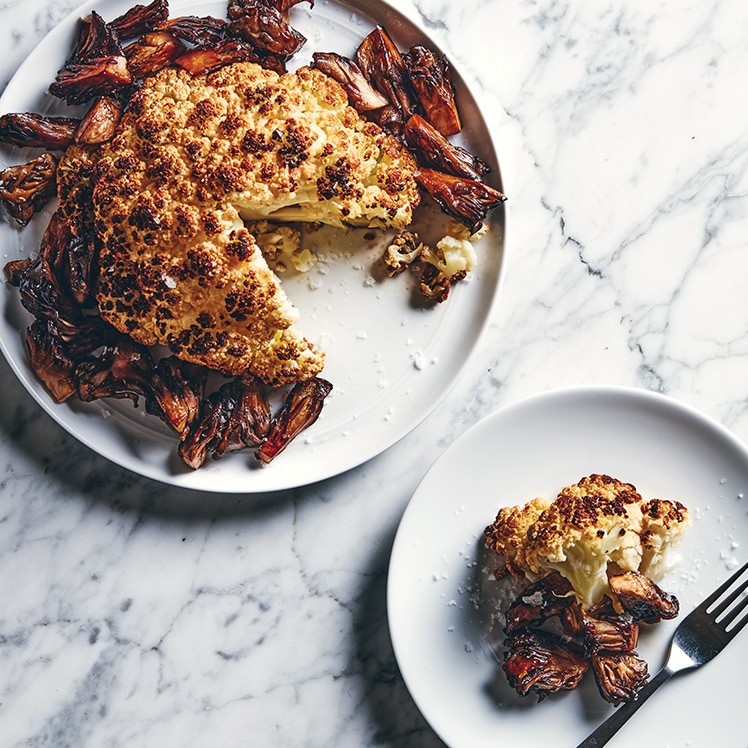 Gently core cauliflower to remove the stem while keeping florets attached. Liberally brush with amino liquid. Coat the bottom of a cast-iron skillet with oil and set the cauliflower in the center.

Roast in a preheated 425°F oven for 45 minutes or until pierced entirely without resistance. While roasting, baste cauliflower with sweet potato amino every 10 minutes.

After 30 minutes, add the mushrooms to the skillet, encircling the cauliflower head, drizzling any remaining amino over the mushrooms. Once the cauliflower is baked through, increase heat to broil for 5 minutes or until a dark crust forms. Rest 10 minutes. Finish with flake salt.

To make sweet potato amino: roast 500 grams sweet potatoes in a preheated 400°F oven until cooked through. Cool, peel and discard skin, and combine flesh with 500 grams rice koji and 50 grams sea salt in a mixing bowl. Using a meat grinder, run the mixture through with medium die and gently toss to fully incorporate. Move the course mixture to a nonreactive container covered with a towel. Store in a cool dark space for at least 3 months.

*We make our own misos and amino acids as part of our extensive zero-waste program. For a faster alternative, you can purchase amino sauces at most health food stores, including the most common from Bragg. Amino sauces are umami-packed ferments that have similar characteristics to soy sauce.