Turkey gets a bad rap. Still. Just as chefs get creative with brining, smoking and blending grinds to ensure moistness and flavor, fallout from the Avian flu outbreak could cause shortages and higher prices.

What to do? Stay updated through the U.S. Department of Agriculture, take a “this too shall pass” attitude and be ready to take off with different approaches on turkey—like the ones that follow. 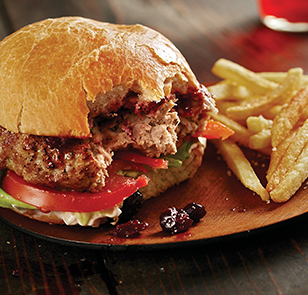 “I wanted to give a burger the complexity of an entire Thanksgiving meal,” says Executive Chef Peter McKnight.

The Xmas Burger, with a stuffing center and a cranberry topping, combines the food-centric holiday flavors in a package that diners can really sink their teeth into.

McKnight starts with fresh turkeys from Hayter’s Farm in Dashwood, Ontario, and grinds together half white and half dark meat. “You need a good amount of fat for any burger to have flavor, and the dark meat has both the fat and the flavor,” he says.

He hand forms the patty, leaving an empty core for the stuffing. The stuffing is a traditional mix of day-old bread, carrots, celery, onions and sage cooked in butter. Once the burger is stuffed, the whole creation goes into the oven. “We roast it because it’s a bit delicate,” McKnight says, “and it gets a good caramelization on both sides.”

The burger is then topped with a bourbon-cranberry compote. The rest of the burger is traditional: lettuce, tomato, onion, mayonnaise and a side of hand-cut fries.

This dish is a byproduct of perfectionism and boredom. “We had a great chicken sandwich on the menu, and it had won a few awards,” says Chef Greg Bastien, “but the dish was losing appeal because it had been on the menu a long time.” Instead of reworking the chicken, Bastien switched to turkey.

He starts with locally raised Gunthorp Farm bone-in turkey breasts. “Anything that’s roasted or smoked on the bone is juicier and tastier than anything removed from the bone,” Bastien says.

The breast is brined with salt, sugar, roasted garlic, sage, thyme and other herbs for 12 hours. Then, it’s smoked with applewood chips for four to six hours and cooled overnight. The skin is pulled off, and the meat is separated from the bones.

The sandwich is served with housemade tomato jam, lemon aioli and arugula. “When we composed this dish, it was just on the cusp of winter,” Bastien says. “I wanted to be able to use canned tomatoes instead of fresh tomatoes, because fresh in November isn’t so great.” The jam combines garlic, onion, wine, vinegar and sugar. The dish has become so popular that it’s now a mainstay. 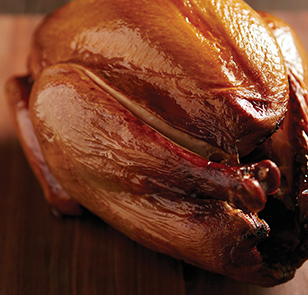 Fulk starts with turkey breasts off the bone—fresh if he can get them, frozen if he has no other choice. Then comes the brine— buttermilk, rosemary, sugar and salt. “Turkey is a very lean meat, so it loves to dry out,” Fulk says. “Brining raises the moisture level of the turkey.”

He brines the bird for less than 24 hours before it’s smoked at 200 F in post oak, native trees to Texas. When the bird hits the halfway mark, it’s submerged in butter, which also sits in the smoker, to finish cooking.

Sauces are available, but Fulk says the finished product doesn’t need anything extra. “The turkey is a sponge of moisture—it’s epic,” Fulk says. “The turkey fight is all about keeping as much moisture in the bird as possible, and that (brining, smoking and butter bath) gets it done.”

Hill Country offers the breast year-round, but for Thanksgiving it’s served as an entree and as to-go meals with classic sides. Last year, they sold 300 birds to-go.

More Ways to Serve Your Bird