Executive Chef Chris Pandel thinks his family meals have improved at Swift & Sons since his modern steakhouse opened in Chicago two years ago—an impressive feat considering the restaurant provides two staff meals a day for 120 employees. It’s a group effort from the entire staff in making it work, including the front-of-the-house, to create dishes such as mac and cheese and pho.

“We try to make it diverse and please everybody,” says Pandel. “It’s not easy, but it’s worth it.” 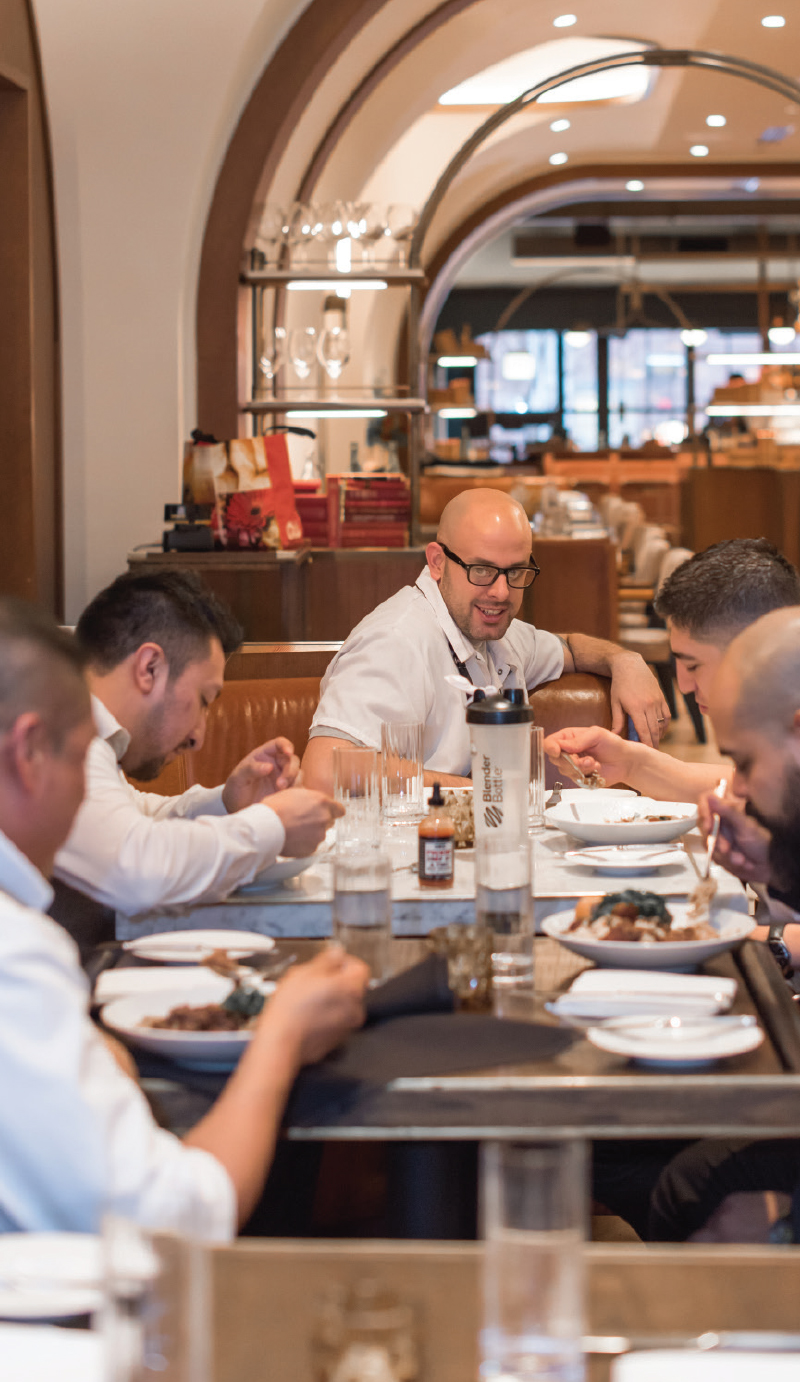 To keep up with costs, he implemented a tracking system for items that go toward the family meal, similar to those used to track waste, voids and comps. Making the most of available ingredients, whether it’s less-than-perfect vegetables or trim from proteins, is a given for Pandel, who buys whole animals to make use of cuts that won’t make the menu. (Beef and bone marrow pie, anyone?).

Planning is streamlined through a family-meal schedule written at the beginning of each month by the chefs, followed by Friday meetings to discuss the details and needs of the next week. Morning prep cooks will often make their own meal, while one of the sous chefs will handle the pre-dinner one. “It’s an ongoing process and everyone has a voice and is involved,” says Pandel.

“My team and I can crank out pizzas and fit that into our daily prep so well that it doesn’t become a burden,” says McCrady’s Tavern pastry chef Katy Keefe. “The best part about pizza is that it’s a great way to feed a lot of people and fill them up.”

Executive chef Ashlee Aubin is always on the lookout for ways to use ingredients already in the restaurant for family meals at Chicago’s Salero and Wood. A sheet tray in the walk-in dedicated to family meals help to make the most of on-hand ingredients, as does a strict deadline as to when items are no longer suitable for the guests. Leftover mise en place makes a great pizza topping, while trim from beef tenderloin is ideal for tacos. “There are a million ways to repurpose mashed potatoes,” he says.

When Jacobs opened DanDan two years ago with fellow chef Dan Van Rite, providing the family meal was a given. But that also meant setting budgets, roughly $5 a day per person for staff meal for the operation’s 22 employees. Making use of excess ingredients helps keep costs in check.

“If we have extra chicken thighs, then it’s fried chicken sandwiches, or if we have extra eggs, it’s breakfast for dinner,” he says. To save time, they make the staff’s favorite ranch dressing in 4-quart batches once a month.

More than a meal

Along with feeding staff, a family meal offers other benefits. Not only does it allow operators to test out potential menu items, it also gives staff members an opportunity to showcase their creativity. One of Aubin’s cooks from Turkey, for example, created a carrot slaw dish from her mother’s recipe for the staff that ended up on the menu.

“It’s practice for the real world and an exercise in putting a dish on the menu,” says Executive Chef-owner Erik Niel of Easy Bistro & Bar  and Main Street Meats in Chattanooga, Tennessee.

While creating staff meals a la minute from mostly in-house products is more often the norm, prepping large pans of lasagna, shepherd’s pie or baked ziti ahead of time helps save on precious labor during busy periods. Same goes for the long physically demanding hours ahead.

“That way everybody is still eating, but it’s not a production,” he says. “If you aren’t taking care of your people, it’s hard for them to take care of your guests.”

The family meal was originally a part of the community vibe at health-driven Los Angeles restaurant Botanica when it opened in 2017. But co-owners Heather Sperling and Emily Fiffer quickly realized that if they wanted to stay in business, they needed to trim front-of-the-house labor costs. The fact that the city’s $12 minimum wage doesn’t differentiate between tipped and non-tipped employees coupled with the state’s tricky labor laws tugged at the restaurant’s bottom line, leading the team to schedule staggered start times and, in the process, say good-bye to its pre-shift family meal.

Instead, staff are now offered a 50 percent discount on food when they are working and 25 percent o the entire bill on their days off. Whenever a new dish is added to the changing menu, servers always get a taste. And at the end of the night, the kitchen serves the evening’s leftovers for the staff. “It’s a nice way to end the night,” says Sperling.