For a standout taco, simplicity once ruled. Pack a housemade tortilla with carne asada inspired by su abuela, add salsa or chopped onions and cilantro. Done.

Then, Chef Roy Choi started the taco revolution, famously turning his popular Korean Kogi taco truck into an empire of brick-and-mortar restaurants in Los Angeles. Tacos moved beyond their origins, requiring more than that perfect three-bite expression of the Mexican table to turn heads.

“Tacos are a great platform for flavor,” says Matt Drummond, executive chef at Loco Taqueria & Oyster Bar in Boston. “They’re composed dishes. Pretty much anything you can put on a piece of china or porcelain, you can put on a corn tortilla as well.”

Taco offerings on restaurant menus have risen 32.4 percent from 2010 to 2015, according to a recent Technomic survey. Once-exotic offerings like carnitas, carne asada and Baja shrimp tacos are now commonplace.

Chefs are proving tacos are as much global as they are seasonal, seeking regional influences from the homeland and beyond. Unusual proteins and seasonal ingredients fill the shell—which is not always corn. Made in-house, tortillas can be creative, too. 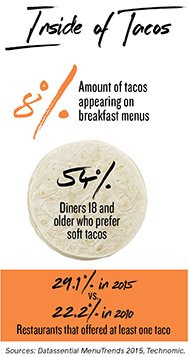 The fusion gambit worked because Hernandez balanced Southern flavors with Mexican techniques, developing a jalapeno-lime mayonnaise for his fried chicken tacos and tequila barbecue for his Memphis smoked pork. Hernandez now operates five locations in Georgia. By scaling up, he’s able to keep prices around $3 a taco.

“My suppliers trust me,” Hernandez says. “They know I’m going to order a lot from them on a regular basis, so they give me the best products at the best prices.”

“Sometimes people don’t want to sit outside on a sidewalk with a paper plate,” says Armstrong. “They want a nice restaurant with great tacos and cocktails and an exciting dining room. People will pay for an experience.”

Fresh tortillas made in-house and higher-end ingredients mean price points are higher than the average taco. A pair can range from $14 to $22, but he says diners rarely complain.

Chef-owner Troy Guard at Los Chingones in Denver sees pricing differently. He’s committed to local ingredients but also to keeping prices low by using inexpensive, flavorful cuts. His steak tacos, for instance, are made from the tips and ends of butts and hanger steaks. His menu often includes beef cheek tacos with green chilies and locally grown Olathe sweet corn or lamb neck with onions and pasilla chilies.

At around $4 per taco, diners tend to order more and splurge on his extensive list of tequilas, margaritas and cocktails. On most nights, Los Chingones enjoys an enviable 50-50 split between food and drinks.

To fit the summertime vibe when the thirst for tequila is high, Chef Tom Dunklin of Three Degrees Waterfront Bar & Grill in Portland, Oregon, opened the seasonal taqueria, TD’s Pop-Up. It runs only during the summer when he can build a menu around seasonal produce and seafood.

Instead of a traditional grill, Dunklin opted for a wood-burning one. He found it imbued the tacos with an undercurrent of smoke, ideal for his richer salsas paired with tacos such as smoked adobo salmon with jicama cucumber relish and local pork belly with shrimp, green papaya slaw, fish sauce and chili oil.

“When it comes to tacos, how you cook a meat or protein can be important,” says Dunklin. “It’s a way to redefine classic flavor profiles.”

The foundation is just as important as the fillings, which is why some chefs are rethinking the tortilla. Alex Stupak, chef-owner of Empellón Taqueria and other New York restaurants, published “Tacos: Recipes and Provocations” (Clarkson Potter) last October with a chapter on other types of tortillas, such as vegetable juice (carrot, beet and spinach) instead of water. He also swaps out corn for other grains like rye and buckwheat.

"People will pay for an experience."

Los Chingones’ Guard infuses carrots and carrot juice with masa he makes in-house to accentuate the tortillas for his seasonal “garden” taco, which include roasted carrots, avocado, cotija cheese and guajillo sauce.

At Publico in St. Louis, Chef Mike Randolph is committed to an authentic taco but also wants the shell “to have the pliability of a flour tortilla with the flavor of a corn tortilla.”

To achieve that delicate balance, Randolph uses imported corn from Uruapan, Mexico, cooks it in a solution of water and ash—a process called nixtamalization—and then hands it over to his tortilla-maker who grinds the corn into masa before hand-forming each tortilla.

At Hecho en Dumbo in New York, Chef Danny Mena has captured a similar sense of exoticism by importing ideas from his native Mexico. His tacos campechanos—filled with salt-cured steak, chorizo and chicharron (pork rinds)—were inspired by a taco sold around the bullfighting arena in Mexico City. His tacos gobernador with smoked sablefish, octopus and shrimp riff on marlin-filled “mayor” tacos.

Part of Hecho’s success, says Mena, also a co-owner, comes from offering tacos that are difficult to find elsewhere. When he sees a familiar taco around New York, he swaps it off his menu for something new.

“Tacos in a sense are like sandwiches,” Mena says. “Sometimes you have to ask yourself what would this be like with a different meat, a different cheese, a different bread? Once you start playing with flavor combinations, the possibilities are endless.”

Peter Gianopulos is a restaurant critic for Chicago magazine, an adjunct professor and a freelance writer. 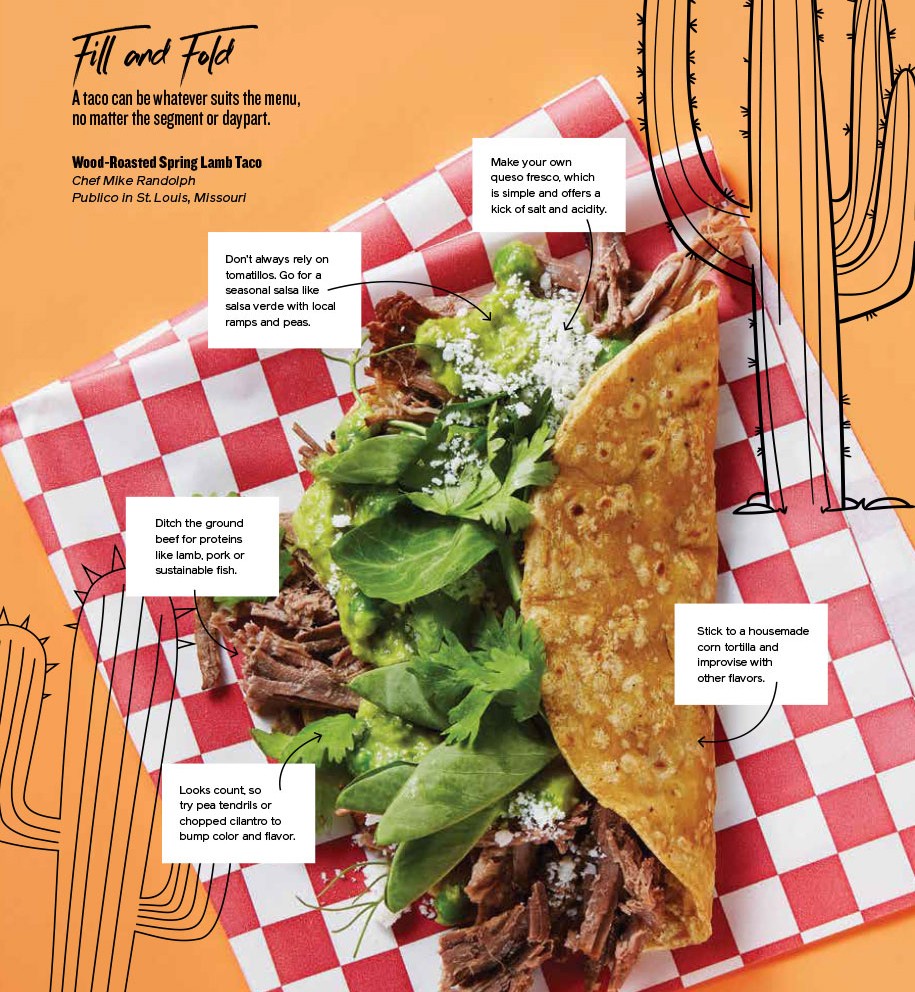