Everybody believes that the barbecue they were born into is the best. Be it Texas brisket, Memphis ribs or Carolina whole hog, the magic that happens when smoke meets meat inspires fierce regional loyalties.

But several chefs, many with fine dining cred, are taking cues from barbecue legends, tinkering with tradition and building a barbecue renaissance. They’re smoking unconventional meats, offering creative sides and starting unique regional traditions in places where there were none before.

Holland opened B-Side three years ago because she says she couldn’t find good barbecue in the Bay Area, though the neighborhood was once a thriving barbecue row. Her approach is different from those long-gone takeout joints, offering table service, a craft cocktail program and a broad-minded approach to barbecue.

In Washington, D.C., Chef-owner Rob Sonderman combined his fine dining past with his love for barbecue to create DCity Smokehouse, a six-seat takeout spot that gained a fierce following after opening in 2013.

Sandwiches figure prominently at DCity Smokehouse. Sonderman stacks chopped brisket and red chili coleslaw on a potato bun as well as chopped pork, cheddar and jack cheeses and crispy fried onions. Then there’s smoked turkey and pork belly with smashed avocado, tomatoes, chipotle aioli and cilantro ranch on Texas toast. He also sells meat by the pound or the rack, always with sauce on the side.

Traditionally, smoking meat was a way of making tougher, more unpalatable cuts tender, delicious and preservable. If you had cows and oak trees, you smoked brisket. If you had pigs and hickory, you smoked pulled pork and ribs. “You bloom where you’re planted,” says Chef Tim Byres, who owns Smokein Dallas and Plano, Texas.

Today, chefs in regions with no history of barbecue are making it with the resources they have on hand. Blue Smoke, which has two locations in New York, works with hickory, maple and oak. At Fette Sau in Brooklyn, owner Joe Carroll uses white oak, maple and beechwood, which are native to the region and impart sweetness to the meat.

“I wasn’t looking to do Memphis ribs or Texas brisket,” Carroll says. “I wanted it to be its own thing. I wanted it to speak to a northeast sensibility; take the technique of barbecue and put it into a vernacular that somebody in New York would understand without much explanation.”

I wasn’t looking to do Memphis ribs or Texas brisket. I wanted it to be its own thing

Texas-born Cody Taylor and wife (and former K-Pop star) Jiyeon Lee prove there’s no limit to what goes in a smoker and comes out barbecue. They draw on their respective cultures at Heirloom Market BBQ in Atlanta, rubbing pork with the Korean chili paste gochujang and injecting brisket with miso, which adds salinity and tenderizes.

At Austin’s Freedmen’s, in the heart of Texas barbecue country, Evan LeRoy smokes beets for a starter, bananas for pudding, oranges for cocktails and tomatoes for Bloody Mary mix, all alongside his briskets, ribs, chickens and pork shoulders.

Where There’s Smoke, There’s a Smoker

Different types of smokers are used for barbecue. In Texas, it’s typically a horizontal indirect heat pit with a firebox separated from the cooking chamber and a chimney for exhaust. At Freedmen’s, LeRoy uses two smokers made from 500-gallon propane tanks.

Wood-fueled vertical smokers feature large cabinets with a box at the base to build the fire and rotisserie racks to rotate the meat.

“It’s as or more complex as anything I’ve ever been involved in,” says Sodikoff, a French Laundry vet. “And it involves just a couple ingredients.”

Some vertical pits are gas- or electric- assisted, using a power source to ignite smaller amounts of wood. Purists frown on them, but they’re easier to regulate than other smokers, and in cities like New York, the fire codes won’t allow any other kind.

In restaurants that smoke multiple meats, brisket is invariably a top seller.

Sodikoff estimates his smoker turns out 3,500 to 4,000 pounds of brisket per week, a necessary volume that compensates for shrinking margins due to ever-rising beef costs. Given the time smoked brisket requires (usually 12 to 16 hours) and the period it needs to rest (two to four hours), predicting the amount to smoke can be tricky. “It’s a very funny business,” he says. “It’s like hurry up and wait.”

Analyzing sales patterns helps to reach that sweet spot of not running out too early but having enough to last through service. Leftover meat can fortify sides like beans, chili or Frito pie.

At Heirloom Market BBQ, Taylor puts leftover smoked turkey in his miso-rice vinegar collard greens. Sodikoff occasionally surprises staff at his other restaurants with a family meal made from leftovers.

The Price of Barbecue

There’s an entrenched historical perception that barbecue is cheap food, so chefs are loath to raise prices in the face of shrinking margins. That’s especially true if the meat is naturally and sustainably raised, like at Barrel & Ashes, Tim Hollingsworth’s chef-driven barbecue and bourbon restaurant in Los Angeles.

Or when you have a loss leader like The Big Rib—the fourth, fifth and sixth bones on a beef rib—served with hominy casserole and fresh herb chimichurri at Smoke.

“Those are so expensive now (that) it’s a dish we really don’t make any money on,” Byres says. “We just do it because people love it.”

Serving breakfast helps balance food costs. “There’s more margin in eggs and bacon, and we sell a lot of bacon down there,” he says.

Sodikoff counts on his guests to help offset food costs. “Your percentages are smaller, but your volume is huge,” Sodikoff says. “The diners benefit from that. They get great quality food at a lower price because they’re doing part of the work, bussing the tables. You get it back (because) it takes one person to smoke 2,000 pounds of meat. There’s no other ratio like that in the restaurant business. Ever. We can serve a thousand people with about 12 people working.”

Mike Sula is a James Beard award-winning food writer for the Chicago Reader. Follow him on Twitter @MikeSula 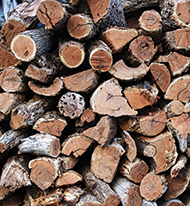 Wood Is It Good For?

Wood is the way when is comes to adding layers of flavor to barbecue. A crash course:

Apple: fruity and sweet; burns hot and slow; good for fish and poultry; has a soft perfume

Peach: mild and sweet; burns hot and slow; good for fish and poultry

Mesquite: burns hot and fast; strong, smoky flavor that can over- whelm; good for grilling