Farm-to-table is fueling a new dimension of fresh and local.

Call it a California revival, multiethnic-inspired or hyper local. It’s a way of thinking about ingredients that has evolved since Alice Waters opened Chez Panisse more than 40 years ago in Berkeley, California. She woke the nation with the premise that fresh, organic, locally grown and ecologically sound farming produced cleaner and better-tasting food.

The seasons started to drive menu trends and chefs began sourcing locally, which gave rise to the farm-to-table movement. Farmers’ markets exploded, quadrupling over the last 20 years, according to the USDA – a menu trend that has led to greater interest in fresh, local and organic foods. Such factors greatly influence purchasing choices, according to various surveys, including 69% of consumers in a Nielsen survey. 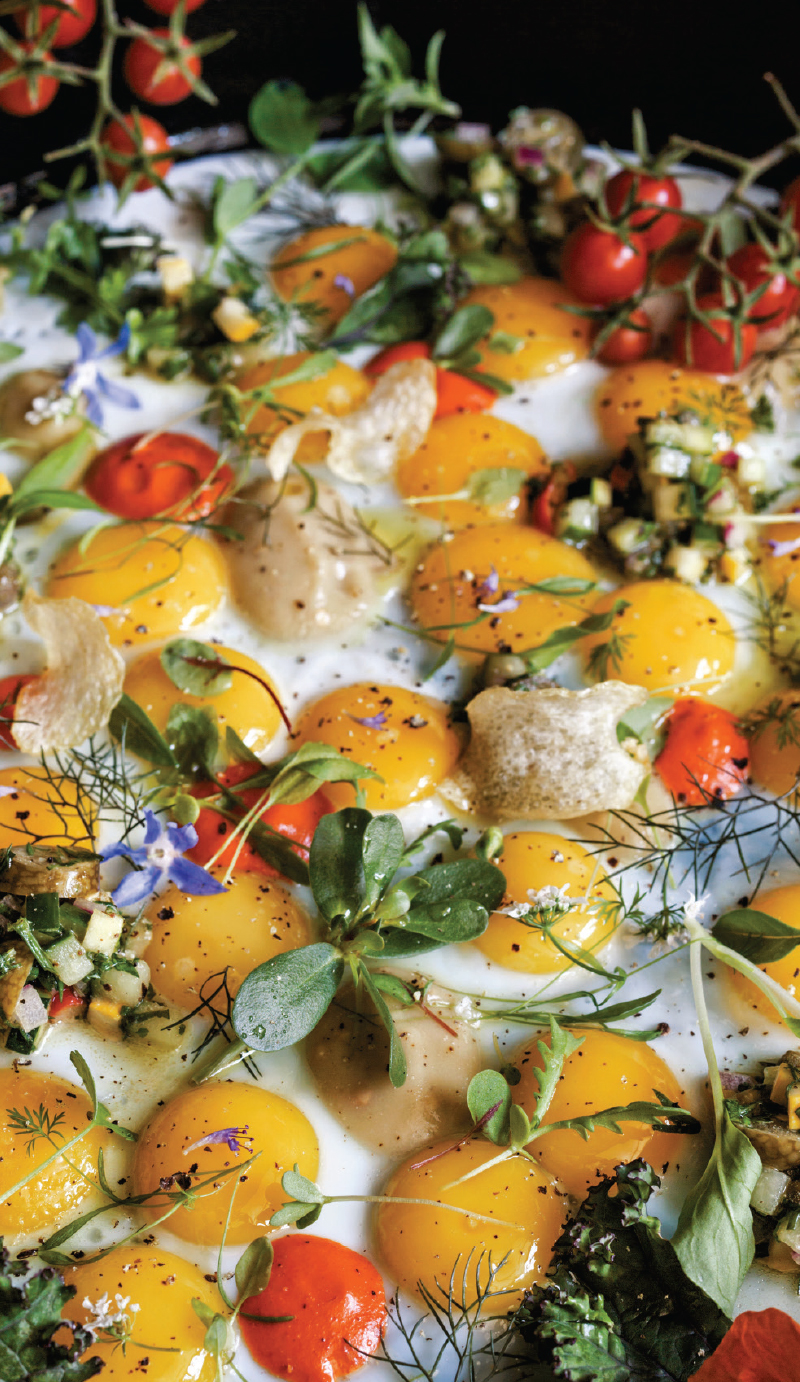 Today, the concepts of seasonal, fresh and locally grown are commonplace, a starting point that has given way to a new handle on farm-to-table. Chefs across the country are zeroing in on deceptively simple, healthful, globally inspired and sustainably grown seasonal food that the Golden State laid claim to years ago – but in an image that reflects their own style, from the vibe to the menu.

You Are What You Eat

Chef Justin Smillie made a name for himself in New York City under the tutelage of Jean Georges Vongerichten and Jonathan Waxman, among others. But when restaurant impresario Stephen Starr approached him to open his own place, Smillie reached back to his roots. Growing up in southern California, backyard grills and simple, fresh produce played crucial roles in many family meals. If a meal had steak, it would be sliced to share and served with a big green salad.

The chef interprets this casual style of eating at Upland, the concept he developed with Starr and the name of the town where he grew up.

“We wanted to have a place that people felt was their place, where they could spend quality time,” he says. But it’s also casual, where you can dress up or down and feel welcome. “It’s come as you are.”

At the New York location, murals of California produce, such as figs, artichokes and citrus – along with natural oak and copper accents – support the casual and fresh vibe. The Miami location is similar, with gallon jugs of preserved lemons stacked on shelves in the dining room, acting as storage and decor.

Dishes take a similar casual approach, highlighting some of the ingredients California is best known for, such as avocados, little gem lettuce and walnuts. But Smillie also showcases local foods. In New York, duck from Long Island is paired with local apples, kohlrabi, labneh and root chips.

Smillie’s approach also aligns with his home state’s fondness for lighter foods. For example, he cuts the richness of ingredients such as short ribs by changing the texture, and how they’re served.

Instead of braising the meat, it’s steam-roasted, giving the beef a texture that is “a cross between a pastrami and a churrasco,” Smillie says. The meat is smeared with a rich paste of black peppercorns slow-cooked in olive oil, an elevated nod to the seasonings of classic grilled Santa Maria tri-tip. It’s sliced and served in a salad, often little gem lettuce, instead of root vegetables on a platter to share between two for $82.

“The short rib is not meant to be for one person. It’s to sit down and share together. And share a couple of salads, which is how we build that California table,” Smillie says, referring to a convivial setting that features dishes that convey simplicity and freshness.

Greg Denton and Gabrielle Quinonez Denton of OX in Portland, Oregon, can trace their culinary lineage back to Puck. He brought Hiro Sone, a chef from Japan, to Spago. Sone met his wife, Lissa Doumani, at the Los Angeles restaurant, and the couple later opened Terra in St. Helena, California. That’s where the Dentons met, cooking on the line while executing Sone’s blend of French-Italian-Japanese flavors on the menu.

“It’s utilization of more global flavor profiles,” says Quinonez Denton, referring to how their experiences have impacted their cooking preferences.

When they developed the menu for OX, they started with Quinonez Denton’s memory of growing up eating Argentinean barbecue in Southern California. But they also knew they wanted to highlight vegetables – a departure from classic Argentinean barbecue, but something deeply ingrained on the West Coast.

The answers came in carrots prepared with the same respect as meat, glazed with maple syrup and seasoned with salted pistachios, tarragon and a dab of goat cheese – as well as roasted cauliflower florets paired with a soy-garlic golden raisin vinaigrette, which the Dentons say tastes like a cross between Chinese sweet-and-sour and Italian agrodolce.

In 2011, when Stuart Brioza and Nicole Krasinski launched State Bird Provisions in San Francisco, they had no idea whether their no-menu, dim-sum style of serving ever-changing small bites from carts would work. They also had no allegiance to a specific cuisine.

They did, however, know that the basic tenets of farm-to-table – local purveyors, such as the farmer who supplies the signature state bird dish (quail), cooking seasonally and acting sustainably (canning surplus produce and using scraps or leftovers to inspire other dishes) and incorporating global flavors – would be the cornerstone. 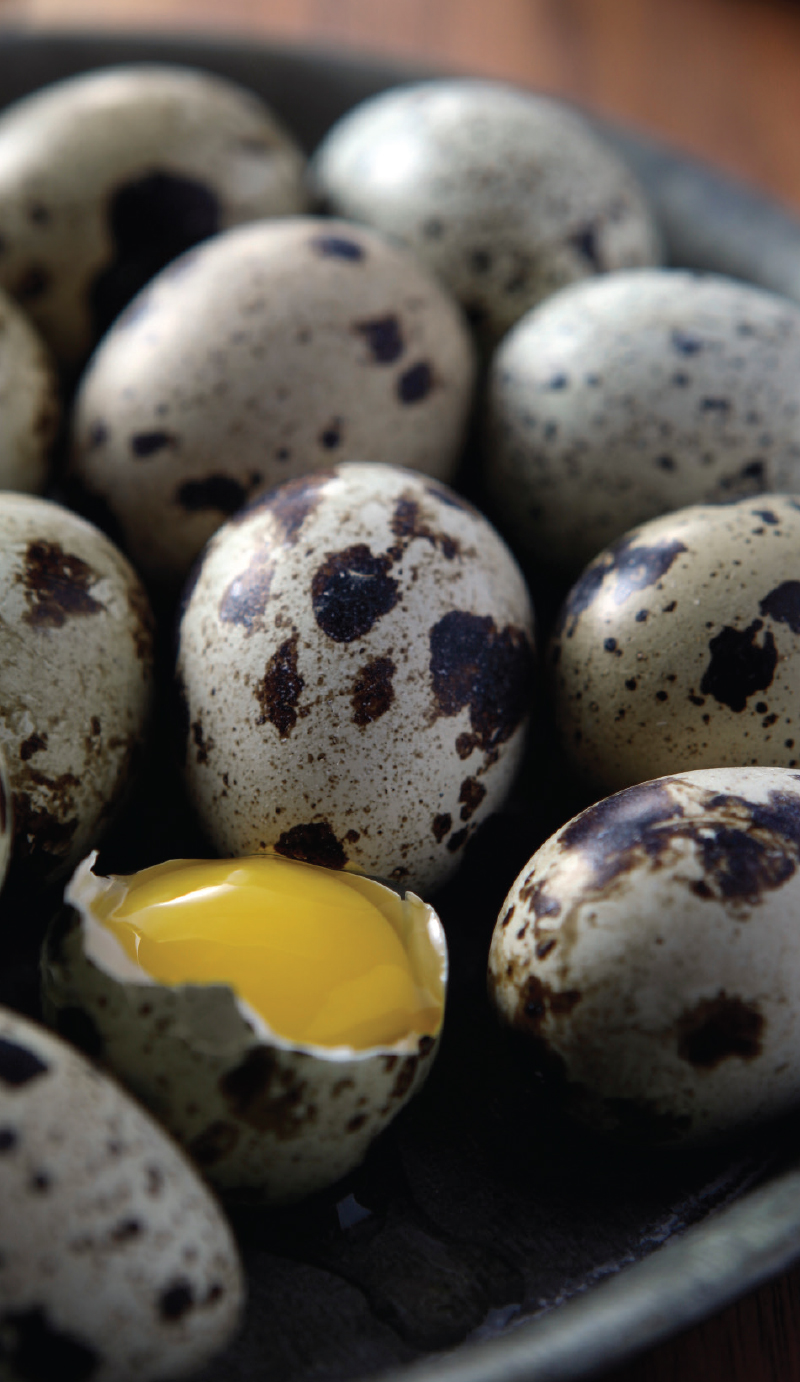 The lack of a menu and unconventional delivery of the food in confined quarters posed challenges. But once the method became known, customers came specifically for their way of developing and serving dishes. Today, lines form each evening.

“State Bird has become a place where ideas come from other ideas, where rabbit holes are frequently dug and explored, where food is always evolving,” Brioza writes in “State Bird Provisions,” a cookbook he and Krasinski published last year. “Where we can cook whatever we want and a fried game bird over stewed onions can share the table with soy-glazed sea urchin pancakes and duck liver mousse with duck fat financiers.”

At Big Star, music – specifically the “Bakersfield sound” of the 1950s and 1960s – was the original Golden State inspiration point. Lately, the Chicago restaurant from Chef Paul Kahan’s One Off Hospitality Group has also warmed to Southern California’s vegetarian and vegan food trends.

While working an event at the Coachella music festival last year, Julie Warpinski, chef de cuisine of Big Star, fell for yuba (tofu skin), which she saw in everything from vegan ramen to sandwiches.

“Paul Kahan and I were looking at each other and saying, ‘Oh my god, we have to try this in a taco,’” she says.

The yuba tacos ($3.50 each) debuted in November. Warpinski treats the soybean product like meat, marinating the sheets overnight in a tomato-guajillo chile salsa. The sheets are seared on the plancha, seasoned with salt and lime juice, and then sliced. For pickup, the sliced yuba is seared on the plancha again.

Farm-to-table will always be home base for chefs; its most recent outtakes, from lighter cooking styles and vegetable-centric menus to global mashups and greater emphasis on homegrown menus, continue to spread. Restaurants that share a similar culture have already opened in New York at places like Dimes and Bar Bolinas, in Las Vegas at Herringbone, and in Atlanta at Muchachos. Yuba isn’t the only thing that Kahan’s One Off Hospitality has brought back from California. The restaurant group’s newest project, Pacific Standard Time, is a menu inspired by – what else – the West Coast.

To Smillie, opening a restaurant inspired by his home state wasn’t necessarily intentional. But it may have been inevitable.

“I wanted to open something that was central to what I like to eat. I like lemons, avocado, nectarines with pork – beautiful, simple ingredients.”

4 Ways to Hit Refresh on a Farm-to-Table Menu

1. Get more global. Locally grown chilies, such as guajillos, gochujang and garum can coexist in your pantry.

2. Be transparent. Consumers more than ever want to know the origin of their food. Share details on the menu or through your servers.

3. Make feel-good food. More chefs are adding local ingredients high in nutrients to their menus, such as grains and probiotics to aid digestion and boost flavor.

4. Keep it green. Think of ways to use produce scraps or leftover mise en place for new dishes. Also educate staff on composting and ask for ideas on food waste solutions.