It’s fitting that a 100-year-old-plus cocktail with no clear birthplace can be found on nearly every brunch menu. Could it be the St. Regis Hotel’s King Cole Bar in New York? Maybe Harry’s New York Bar in Paris? It doesn’t matter when bloody marys are a favorite, whether at airport lounges or college town sports bars. Mega-garnishes like hamburgers, pizza slices and chicken wings are attention-grabbers, but a refined bloody mary has virtues worth considering. We’re talking more substance and less show as a strong point of difference. This doesn’t mean boring. Just play to the possibilities of its main flavor components: umami, spice and booze. 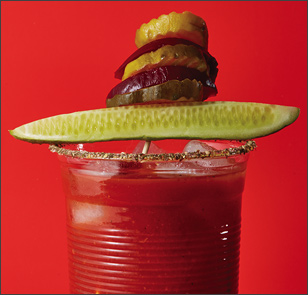 Inspiration: Vodka’s not the only bloody base in town.

Booze counts when it comes to a quality bloody mary, which explains why some bartenders are trading classic vodka for trendier and more flavorful spirits. At Ned Ludd in Portland, Oregon, Chef-owner Jason French offers the option to swap in aquavit for the restaurant’s bloody mary.

“The elevator pitch for the aquavit is: Vodka’s boring,” French says.

French adjusts the rim of the bloody mary glass to echo aquavit’s flavors: caraway, coriander and sea salt. The base is mostly traditional: tomato juice, Worcestershire and a handful of spices with a splash of sherry vinegar, inspired by gazpacho.

The stars of the drink, though, are its garnishes: a cucumber garnish joined by a host of seasonal and nontraditional pickles such as watermelon rinds, apples, beets or pears. French brines each in a specific liquid based on its acidity and sweetness.

“I want it to be bright, but not lasting in its acidity,” he says. “If all pickles use the same brine, it becomes monosyllabic. This way you get a range of sweetness and mild acidity, and I think it makes for a more interesting eat. At the end you’re not puckered out.”

To keep the focus on the pickles, the drink is served on the rocks in a simple, rimmed highball glass.

Lowell’s Restaurant is pushing 60, but its most popular bloody mary definitely isn’t old school. It’s the Kimchee Mary, a surprise hit that began as a way to use the leftover brine from the kimchee slaw that crowns the restaurant’s tacos.

“There are a zillion easier kimchee recipes than mine that you can make to obtain a brine,” says General Manager Mark Monroe, adding that kitchens that already make kimchee can easily skim off the brine to use in the recipe. “I just happen to love mine and use the kimchee to top our braised brisket tacos.”

Presentation is also notable here: an 8-ounce, swing-top bottle contains 4 ounces of bloody mary mix, 2 ounces of vodka and 1 ounce of kimchee brine. It’s accompanied by a mason jar rimmed with a powder of ground dehydrated pickles and roasted sesame seeds, garnished with a pickled onion and green beans. Guests pop the top and pour their own bloodys, adding an interactive element, and making it quick for servers to get the drink from fridge to table.

Inspiration: Spirits with a custom spin.

Vodka is a blank slate, perfect for infusions and barrel aging techniques that can set a bloody mary apart from the pack. At The Bonneville in Austin, Texas, Chef-owner Jennifer Costello uses both approaches to give layers of warmth and personality to the blah base spirit.

She begins by adding guajillo and ancho chilies to vodka for spice and smoke. Basil leaves brighten the earthy peppers with a freshness that lasts through the barrel-aging process while Sichuan and black peppercorns offer an additional layer of heat. After infusing for one week, the vodka rests for another two to three weeks in 3-liter charred oak barrels.

“Vodka is, by nature, a pretty hot alcohol. Barrel aging knocks that off and kicks that earthiness way up,” Costello says. “You’re pulling toasted wood notes out, plus caramel and vanilla. Those warm elements work with the layers of smoke and heat while basil keeps it bright.”

For the bloody mary base, Costello prefers a subtly spiced tomato juice, so the complex barrel-aged vodka can shine. Glassware also stays straightforward: a tall, unrimmed Collins glass, garnished with seasonal pickled vegetables (radishes, green beans, even squash) plus an olive and a lime wedge. The Bonneville even offers a “stripped down” version of the drink that’s simply heirloom tomato water ice cubes, a shot of the barrel-aged vodka and dash of hot sauce.